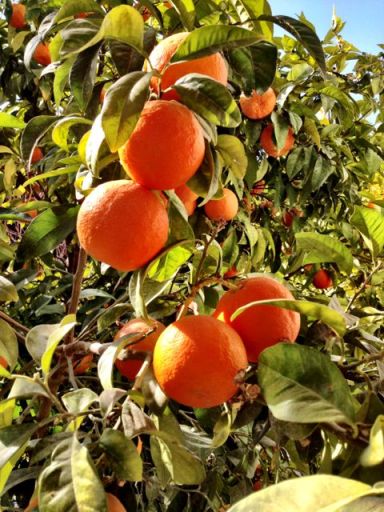 Orange trees in the garden

Cyprus sojourn a great success from the moment I was wheeled off the plane. Despite the weather being less than kind – only two out five days sunny and warm – we had a lovely time. One day we went up into the mountains and found an eccentric tavern hidden down a side street which had a huge display of whisky bottles and where we feasted on delicious moussaka, watched by a funny little dog. 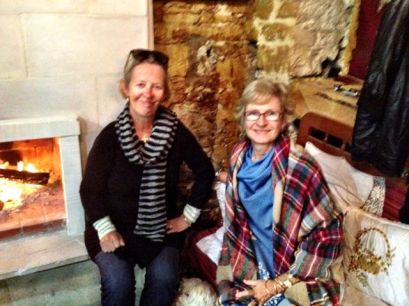 Sitting by the fire in the taverna 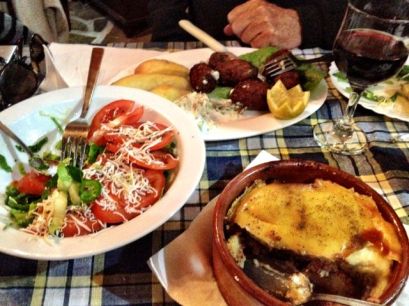 Thats what I call a moussaka! 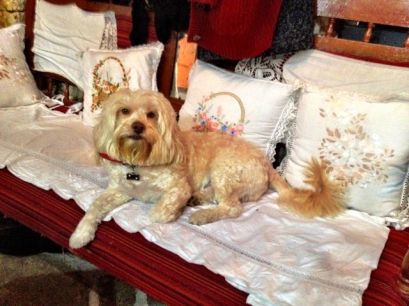 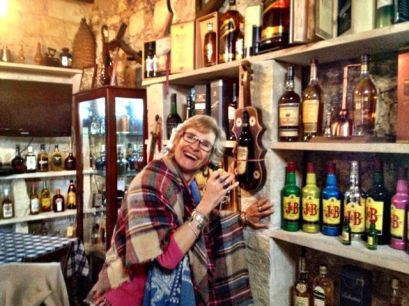 They were empty, dear reader!

On another we braved the inappropriately-named Malindi Beach Bar for oysters and the grilled squid with the Chief of Staff of the Cyprus Peackeeping Forces, an old chum of Penny and Mike’s. A rainy day even found us in Zara buying sweaters! 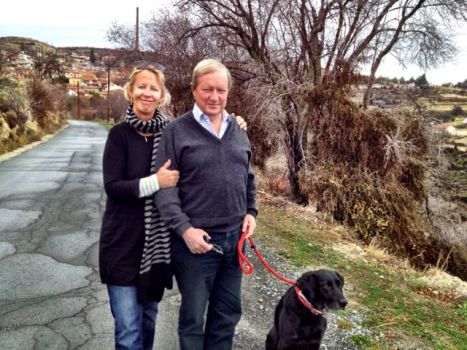 Mike and Penny with the loyal Sugar in the hills

Penny and Mike are perfect hosts, from the kettle in room and four varieties of tea, healthy breakfasts and lunches made from the freshest of Cyprus fruit and veg, the roaring fire and a fine array of champagne and wine. Their house is set in the hills, just outside Limassol, which is a grey and messy sea-side strip of a town, rather down-at-heel at this time of year. The Russians are all gone, apart from in the Four Seasons, where we went for dinner one night. Friends Roma and Mariana had stayed there a few years back – was reminded of this as they cooked me a wonderful supper the night before I left. The girlfriends are rallying round!

Before I left, we celebrated two other significant events, Tommy’s 26th birthday in the heavenly Singapore Gardens, and a visit to Little Lou’s Bench with her dear friend Cara. 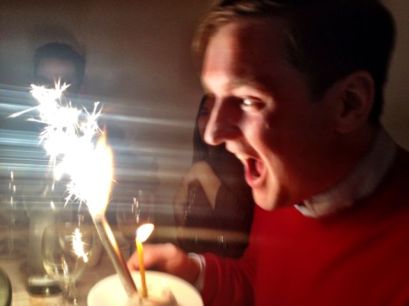 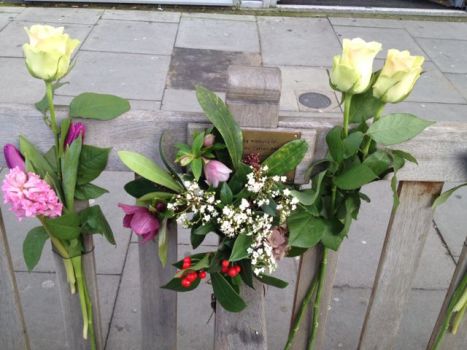 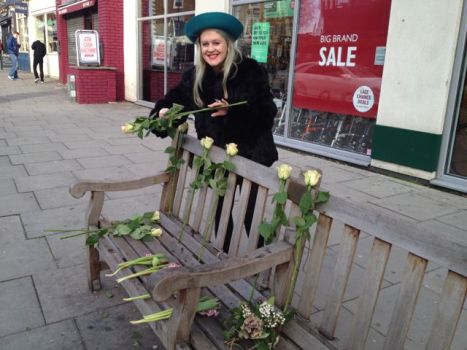 The week was full of coincidences: on the way out at Terminal 5 I bumped into an old friend Roger Hooper, a wildlife photographer who had been with us to Mana Pools. He was a useful and charming bag-carrier. On the return flight I sat next to a woman and we got chatting, as you do. Turns out she was half Chinese, brought up in Malaysia, had lived in Barbados, now lives in Cyprus, but had worked in Deloitte, her daughter had worked for the previous Black Rod (as was Mike), her husband and family are Jewish but, most strangely of all, she was in recovery from lymphoma and as going to London for treatment. We had a lot to discuss! To cap it all, yesterday as I waited for my abortive – yes, see below – radiotherapy treatment, the man next to me had a brother living in Pyrgos, which is the very same village in Cyprus where Penny and Mike live. 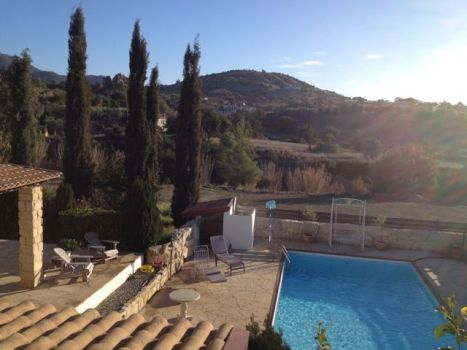 I come back refreshed and revived and ready for the start of the six-and-a-half week slog. To take my mind off it, and because my juicer and Riverford veg boxes had arrived the previous day, complete with Seville oranges, I spent the morning making marmalade. I had only just bottled the last jar when the taxi came… 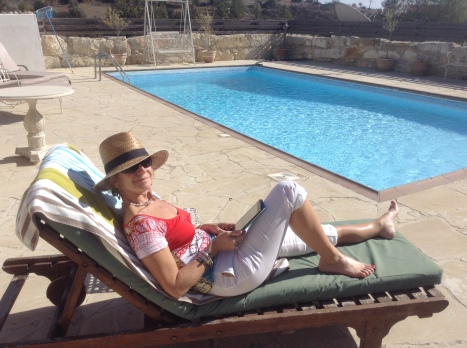 As usual everyone at the Marsden nice and kind. After my start-of-treatment briefing, I waited and waited (hence the conversation with my neighbour, also waiting. The most common question seems to be ‘what time is your appointment?’ I was asked this three times…I have decided I am going to fill this time profitably: I have re-ordered my daily Guardian to be home–delivered; and I am going to suss out who all the people are being treated. Very little English was being spoken, which I thought was interesting, as this is the NHS, not a private hospital. Although there are one or two private patients – not the norm – such as myself.

By the time I am invited into the room, we are running 40 minutes late. I put my leg in the cast and Kirsty and Anisha explain that they will align everything, test the machine’s movement radius (it has to go round and under my leg to zap it from several angles) take some photos and then ping! The treatment itself is 7-10 minutes. Sounds OK, think I. How wrong could I be? After admiring my pedicure, we make small talk including, Me: ‘How many leg sarcomas do you see?’ Answer: ‘This unit only deal with limb sarcomas so we see many, from all over the country’.

So an hour later, I am wondering if they have ever seen anyone with two legs before, as they cannot work out what to do with my good leg – we try the spongey mats (no good as they can’t align the machines through them properly), next two different stirrups, which remind me of visiting the gynaecologist, and then senior radiographer supervisor Mary is called into consult. Whisper, whisper, whisper…meanwhile my leg is firmly clamped into the vice-like cast and I am trying every variety of yogic breathing I can recall: ‘observe your breath’ I keep saying to myself, ‘in 1,2,3,4,5; out 1,2,3,4,5,6,7,8,9,10’. To no avail. My leg is on fire. Glad I took the tramadol, even though it doesn’t seem to have worked!

Finally they admit defeat and I am asked to wait outside while they consider the options, while not lessening the efficacy. This includes re-planning the whole treatment. ‘How long will that take? I’m booked to go to Singapore on 21 MArch,’ I wail. Nadir.

Mary re-appears after 15 minutes, having seen Dr Aisha, who said ‘She has a flight to Singapore’. Phew – we are on the same page! It is now 5.15, two hours after my appointment time. In fact the treatment plan does have a Plan B (why they couldn’t find it on the system is a mystery), which involves zapping me from a different trajectory so the good leg is avoided. They will do this tomorrow at 3pm in order to get time to re-calculate everything. So bang goes physio and probably my weekend pre rush-hour escape from London to Doctor Fi’s for the weekend. 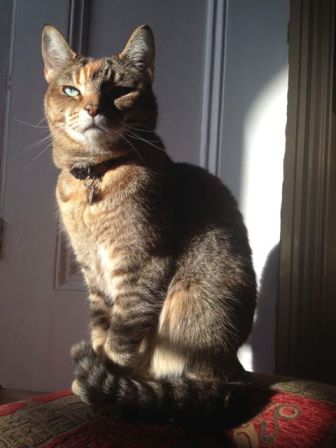 Just in case you missed Pickle

All I can think of in my frustration and misery is the large G&T waiting for me when I get home. But joy of joys, there is the added bonus of a gorgeous bouquet from friends Anthony and Carrie – she has had radiotherapy too (and the rest) – but now well and happy, and knows what a girl needs to cheer her up! The evening only gets better; other friend Philly and Sandra arrive with a four-course meal: home-made soup and smoked salmon, followed by cod with spicy lentils and a Pavlova! They announce a competition to see what you need to do to get a blog mention. Well done Ladies! 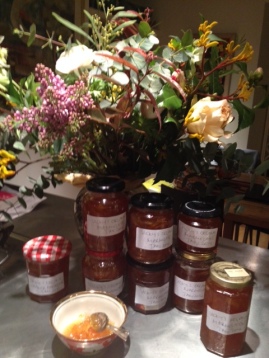 Flowers and my marmalade – organic of course!