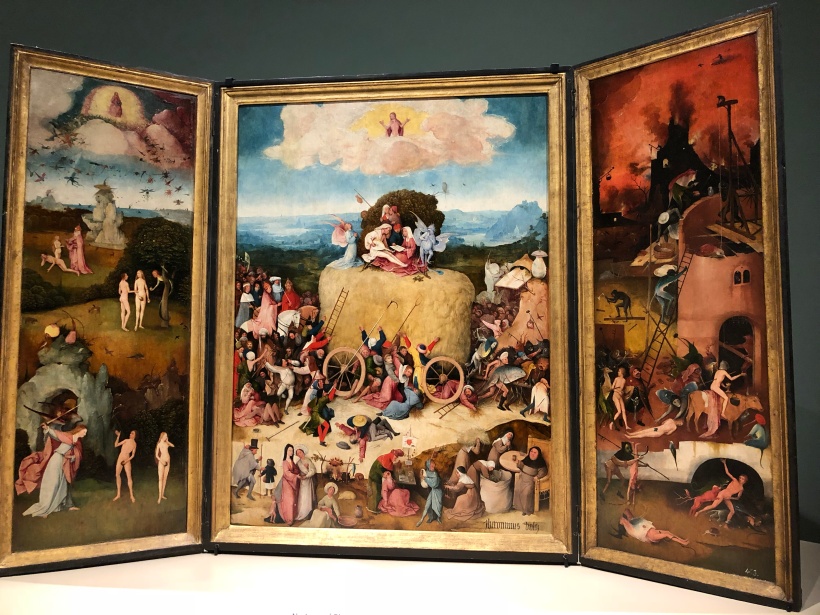 The Haywain triptych by Hieronymus Bosch – a stolen photo!

It’s become a habit to celebrate our joint birthdays somewhere exotic – we are only 6 days apart and yes, I am the older woman. Last year we were in Nicaragua and this year we chose Madrid as it equidistant from Basel and London – plus we’ve only ever been there on business. 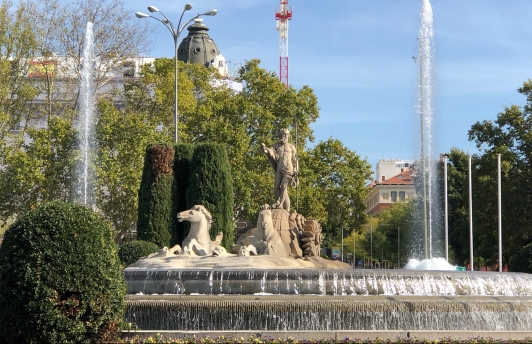 Neptune fountain outside our hotel

The grandest Min of Ag I’ve ever seen

I check the weather forecast and am delighted to see that 16-18 C and sun is forecast. So I can travel light with a shoulder bag and a slim down jacket just in case. Plus my new Geox boots with orthotic insoles and stick to help my poor legs! 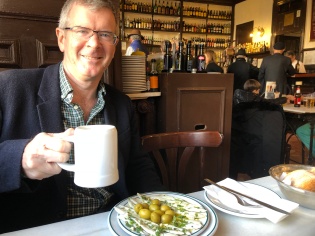 Another day another beer series… 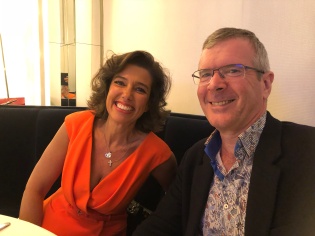 Ross with his former colleague Ana

We have romantic meeting at the airport and jump onto the Renfe train (Euros 2 each!) which takes us to the magnificent Atocha central train station. From there it is a short 15 minutes to our hotel, the NH Collection Paseo del Prado. It’s a holiday weekend and the streets are thronged, everyone enjoying the sunshine. We pass the Botanic Gardens which I mark as somewhere to see (we do!). 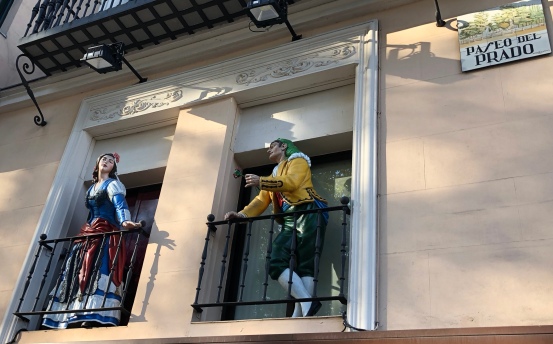 These two jolly people were on the corner of our street

Our hotel, we were win the first floor to the right of the big window

The hotel is right opposite the Prado Museum and 3 minutes walk from the Thyssen-Bornemisza Museum. The hotel is super-helpful and gets us our Art Pass which covers those two galleries plus the Reina Sofia where Picasso’s Guernica is housed.

We have friends from Singapore in Madrid who we are to meet on my birthday the following night, but Ana has given us great restaurant recommendations. On the first night we have a drink in the Santa Ana square, and then try out on of the ancient sherry bars  where we share a half bottle of ice-cold fino. My mum always used to have this and I had forgotten what a delicious drink it is.

Ross enjoying teh fino at the La veneciana bar

Outside a typical cervesas bar

Then off  to Rondo14, a fusion of Peruvian, Japanese and Asturian food. It is quite special, everything delicately flavored, mostly sushi-based but with original fillings and toppings. And the whole meal comes to only 75 Euros including some fab wine. 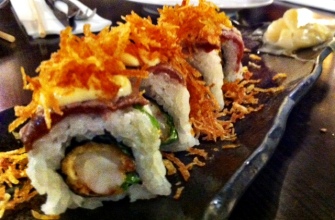 Ceviche – although I think I make a better one!

Saturday – my birthday – is serious museum day. We are at the Prado with our Art Pass at opening time and only wait a short time before heading inside. It is relatively uncrowded to start with and we have been advised  (thankyou Clare!) to concentrate on the Bosch (sneaked in a photo before being told off – but it is an innocent mistake as the warnings are not clear) -Velasquez and Goya. Which we do – the Black Paintings are truly mesmerising; but we also take in the early Italians and enjoy the Titians, El Grecos, Rubens, Rembrandt, van der Weyden and other iconic paintings. As I can’t reproduce any Prado paintings I will scatter images from the Thyssen throughout! 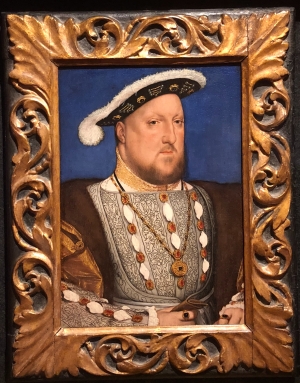 A famous Durer, Jesus among the doctors 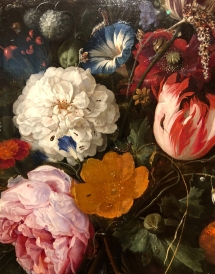 And here, look at the insects in this still life also Dutch from 1665

Love the light on this early Dutch (1634) still life 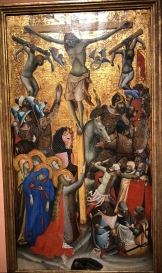 It is a bit early for lunch so we wander round the Botanic gardens admiring the autumn foliage – spectacular maples – and impressive brassicas in the vegetable gardens, before sitting in the sun outside Murillo and quaffing some birthday cava, and tapas.

The acres in the Botanic gardens

These gardens are very old and laid out geometrically

After lunch we stroll down to the Reina Sofia and walk through the Guernica floor- lots of Spanish cubists, including Gris and Picasso,  and Dali, whom I don’t like. Guernica is breathtaking in its scale and stark symbolism. 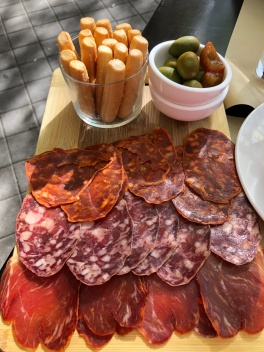 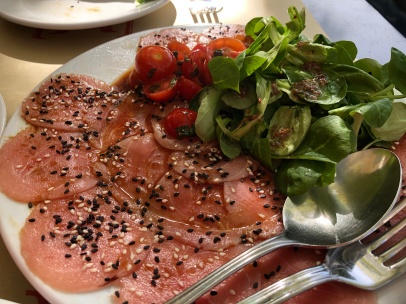 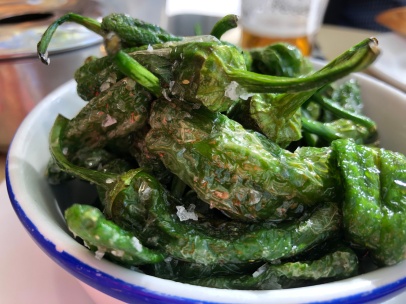 In the evening we meet up with Ana and Philippe at trendy Bibo, where tuna is the specialty. Again the food is delicately prepared with the highlight being smoked cubes on tuna in a yuzu and light soy sauce, all served under a dome. I am interested that Philippe thinks Spain is on the up after a long time in depths – certainly we see few beggars or homeless (but perhaps they are removed from sight) and people are friendly and seem happy. Maybe it’s the effect of a warmer climate. The city itself seems booming, lots of new buildings. 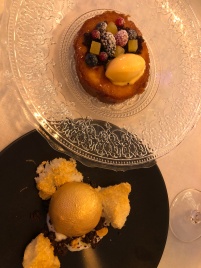 The dome, with smoke 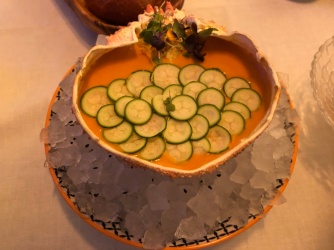 Ana, Ross, me Philippe in Bibo

For our final morning we take in the Thyssen museum where the Count’s huge collection was supplemented by his widow after his death. It makes for a fascinating pairing, and the influences between the two are clear to see. We are struck by the unusual 19 century American collection, as well as some well-known early Dutch and Italian masters, along with more modern work by Max Pechstein, August Macke (both new to me) and the  fascinating Freud paintings of Count Thyssen with their intriguing references. And, of course, I am always thrilled to find new Chagalls! What a treat…

Chagall – the grey house, so reminded me of the Russian paintings in Basel

Here’s American artist Winslow Homer in 1864. Look at that light

And this, the Cssa girls, his romantic period 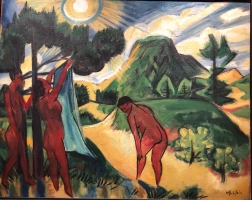 Pechstein again. Dont know why I hadn’t clocked him before

It all ends too soon, and by 3 pm we are at the airport waiting to go our separate ways. The only downer is an over-officious jobsworth who tries to make me check my walking stick as she didn’t see me walking to security with it: I had folded it away for convenience, but I had been using it ALL weekend. The guarda is summoned and after a 15-minute wait with sympathetic underlings (‘she is the boss, what can I say?’), they arrive and dismiss jobsworth as an idiot.  Notwithstanding this single incident, it’s been a wonderful weekend of gourmet food, cava, tapas, renewing friendships and, most of all, scintillating art.

6 thoughts on “An indulgent & arty weekend in Madrid”