The Mezquita from the Roman Bridge

We leave Seville quite late (after our trip to the Alcazar) for Córdoba. On the way we detour to the most extraordinary site, the Madinat Al-Zahra (the shining city) built from 940 AD by the first Caliph of el-Andalus, Abd al Rahman III. Very little remains as, after the fall of the Umayyad Caliphate, the city was ransacked for its stone and marble. It was not excavated until 1911, and now only one-tenth of the site has been revealed. The museum showcases the extraordinary opulence of this period, with carved marble columns, gold ornaments and jewellery, bronzes and ceramic vessels. 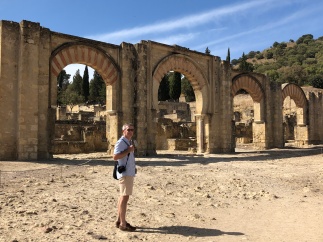 It is well over 30 degrees and by the time we reach Córdoba I am done in! Our hotel, the Casas de la Juderia is cool and welcoming, set around several courtyards in traditional style, it even has a roof-top pool, cold and refreshing. 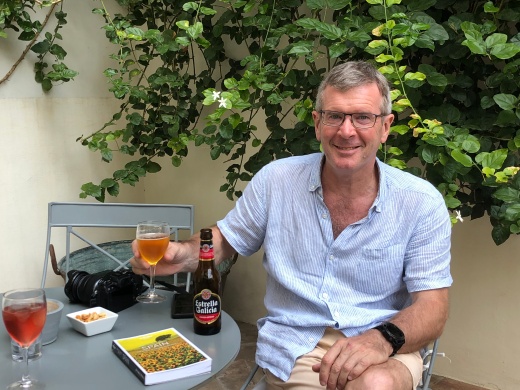 another day another beer!

Traditional courtyard in the hotel

Another traditional courtyard in the hotel

We take a stroll around the Jewish quarter and around the Mezquita where we perceive no queues! Córdoba is much quieter than Seville although the two or three main tourist drags are lined with gaudy shops selling flamenco aprons and other useless knick-knacks. We walk through the throngs (more Chinese gangs) to dinner in the old town, mown down by a fun run en route. As ever the portions are enormous and I am beginning to tire of tapas, and all that fried food. For the record, orange and salted cod salad is disgusting (I was in search of something fresh!) 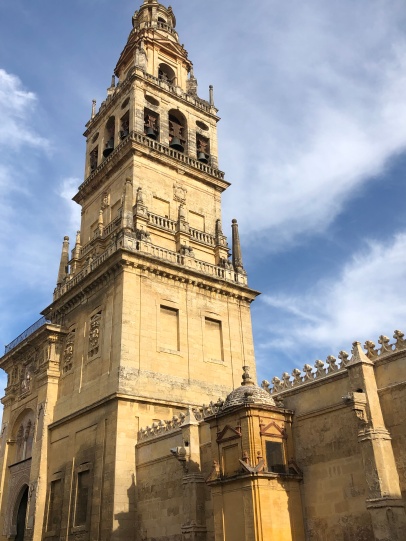 Terrified of having to queue again, we set the alarm for 7 am in order to be first in line for the opening of the Alcazar at 8.15. We arrive in darkness; the cleaners glance askance at us as we sit to wait in the cold dawn. By 8 am only one other person has arrived, a chatty Frenchman who is walking round Andalusia. We are the first inside. I am not surprised there is no queue as the building itself is disappointing internally; it was used as a prison during the inquisition and still has that feel. But the Mezquita and the gardens shimmer softly in the glow of the rising sun. 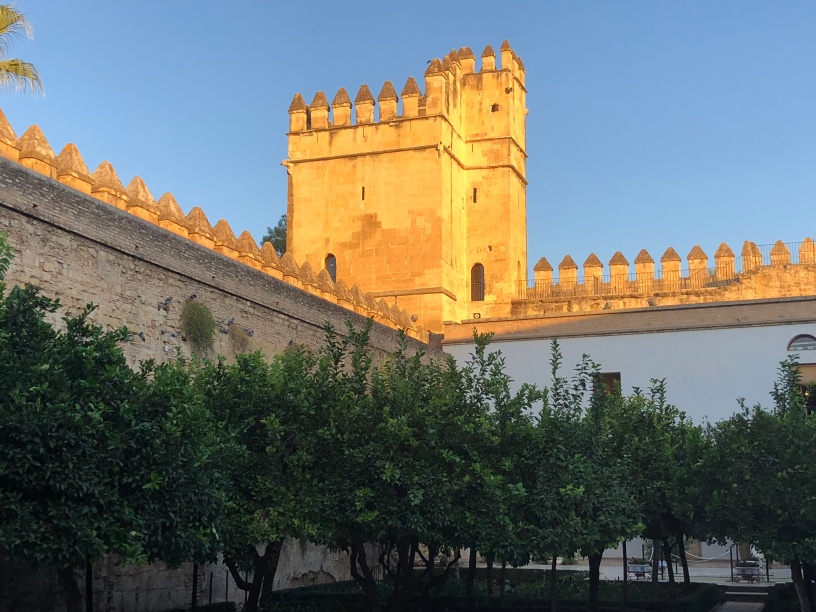 View from the Alcazar towards the Mezquita at dawn

As our tour is not until the next day, we visit various local points of interest. The synagogue, as I said in the last blog, is one of only three remaining in Spain. It has fine Mujedar-style (although Islamic this style was used by Jews and Christians alike, so is a hybrid of cultures as we see much later in Alhambra) stucco work dating from its founding in 1315, which was only recently uncovered as the synagogue had been converted into a church after the expulsions. This is a theme of many of the buildings here – all built on foundations of another, be it a Visigoth basilica, Roman temple, mosque or synagogue. 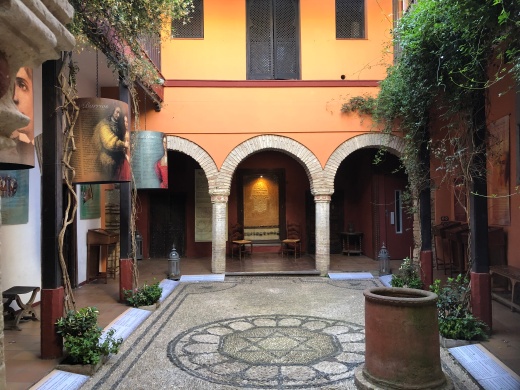 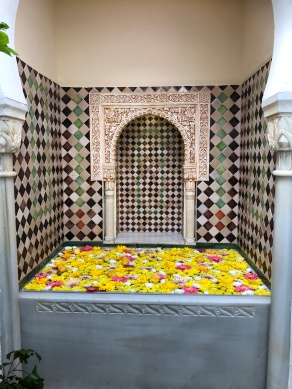 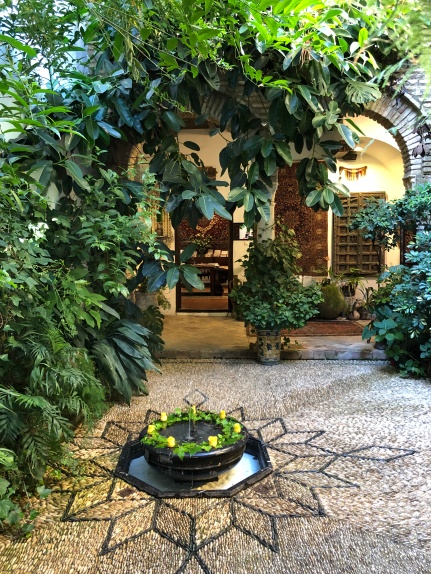 The Sephardi house opposite gives a potted history of the Sephardi community in Córdoba and celebrates the life of its most famous son Maimonides, erudite scholar and doctor, who eventually fled to Morocco and Egypt. It is still searingly hot but, after a stroll across the Roman bridge with its marvellous views of the Mezquita, we stagger out to the Botanical Gardens, which are disappointing and far! The reward is a swim, and a fine dinner at Regadera with not a tapa in sight, and some inventive modern cooking.

reflections of the Mesquite 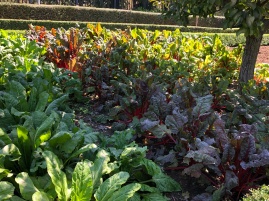 More lettuces than flowers in teh Botanical gardens

Tempura hake with a paprika foam

All about the lemon with a sugar bomb!

Before that, we decide to have a preview of the Mezquita prior to our tour. At 5 pm we have no difficulty getting tickets and astonishingly it is almost empty, save a few Chinese posing for selfies, and we are able to take unhindered photographs.

Amazingly empty, view down towards the entrance to the first mosque with the original stucco work, columns and arches built in brick and limestone

The hybrid styles of Moslem and Christina architecture begin

Area closed off by Charles V to build his wretched organ

The enormous arched interior, built from scavenged Roman columns (the first mosque was built in a year by Caliph Abd al-Rahman III – he of the Madinat al-Zahra fame, quite a prolific chap – in the 10thcentury) with brick and stone arches, is monumental in scale and quite wondrous. It was built over a Visigoth basilica, whose remains can also be seen underneath the floor, and might explain why the mosque does not face east towards Mecca, but south. The clever architect gave a further feeling of spaciousness by alternating red with grey marble columns. We are grateful the next day for our guide’s explanations of all we have seen. And feel the money is well spent. 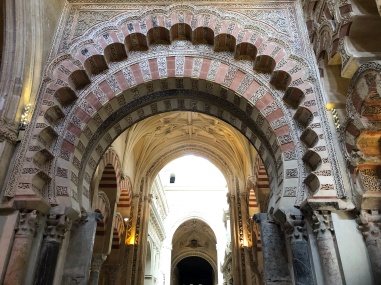 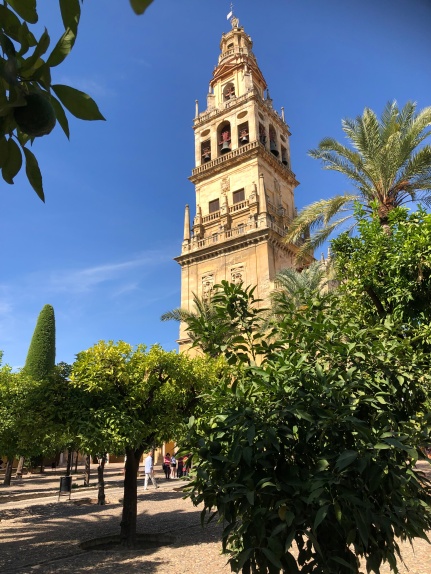 The Tower which was minaret

I suppose one could be charitable and say, thank goodness Charles V didn’t do the normal raze and rebuild, but simply inserted an intricately carved baroque marble cupola, altar and mahogany choir stalls within the mosque’s fabric – though it is said that, when he saw that he had been tricked by his confessor and bishop, Charles was furious, ‘there is only one mosque and thousands of cathedrals!’ Essentially it is a cathedral built within a mosque, even the minaret is encased in a gothic tower. 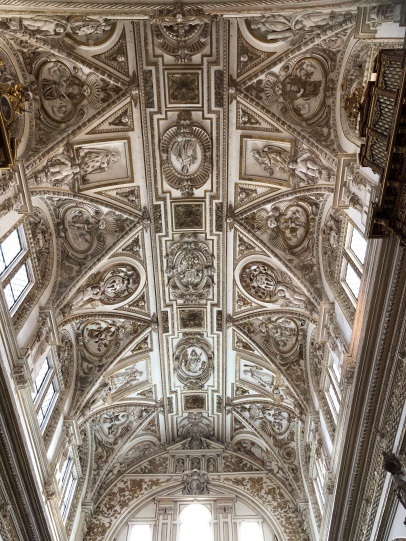 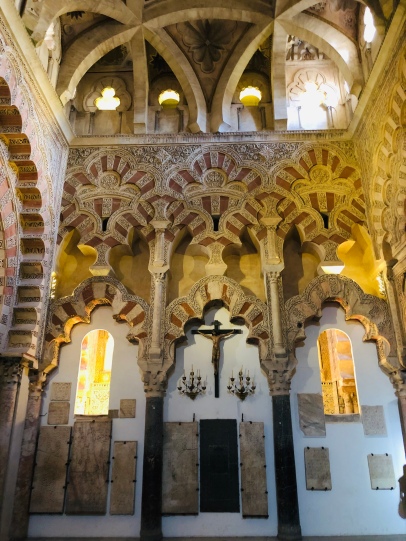 One end of the first Church built in the Mesquite

To my mind it’s an abomination, but it makes for a spectacular interior! The mihrab of the third addition to the mosque is breathtaking, as is its roof, the Islamic parts knocking spots of the pompous Christian additions. The Mezquita must be one of the wonders of the world – certainly one of mine.

The roof of the Mihrab 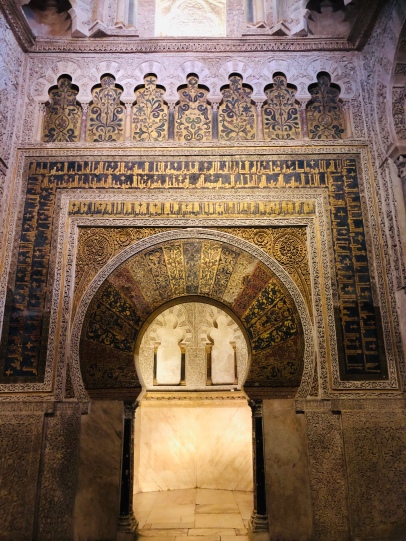 The fabulous guided Mihrab encrusted with thousands of jewels

2 thoughts on “A week in Islamic Spain: 2 Córdoba”