So here we are in Granada, home to Alhambra, which means the Red Fort. It is correct to simply call it Alhambra as ‘al’ means ‘the’ in Arabic. Granada itself is named after the old Jewish settlement, Medina-al-Granata, or Pomegranate City, the fruit being a symbol of fertility, which is said to contain the same number of seeds as the volumes of the Torah. We have a free day to explore before our extortionate tour; still nervous about whether we have been scammed, we are relieved to get a text confirming the meeting time. Phew!

We are staying in the Guadeloupe, a hybrid hotel (rather like the Nasrid dynasty), a mix of old and new, but it is bang opposite the entrance to Alhambra. The first evening we wander through the free access parts of the monument to drink in the atmosphere, before finding a fabulous restaurant with a terrace and sunset view. 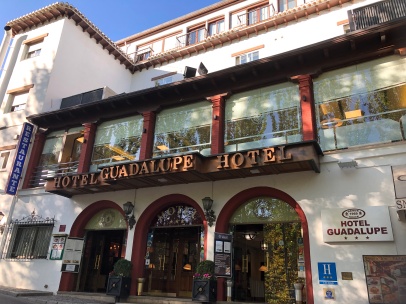 In the morning we walk down the hill to the old quarter, the Albaicin, skirting round the north side of Alhambra. We see evidence of the old irrigation aqueducts, which we later learn are one of the trademarks of Alhambra and evidence of the great engineering skills of the Nasrids. 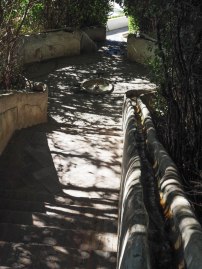 Aquaduct below the Alhambra 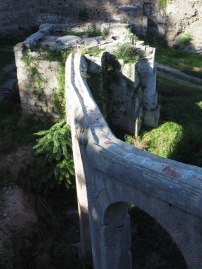 Aquaduct below the Alhambra

The Nasrids came from Nars in Saudi Arabia in 711 and by the time the founder of the dynasty, Mohammed I, began building Alhambra in 1238 they had been in Europe for 500 years. They were pale-skinned and many had red hair and beards through intermarriage as can be seen in this leather ceiling painting in one of the Alhambra palaces. On the way they had hybridized their Muslim customs with Jewish and Christian customs – they drank wine for instance and mixed freely with other religions.

Red beards! this is on leather

Alhambra towers over all

Back to the Albaicin, with its narrow steep cobbled streets but, astonishingly, navigable  by the buses, where we visit several old palaces, including the Casa del Chapaz, where the box hedge is to die for and the views to Alhambra are glorious;

Box to die for! 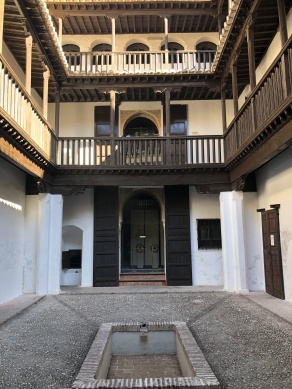 then to the Palacio Dar al-Horra, residence of Queen Aixa the divorced wife of the murderous Mohammed XI . She was mother to the last Nasrid King Boabdil, who surrendered to Ferdinand and Isabella in exchange for a life in exile, and for the safety of the Muslims. Needless to say this only lasted two years before the killings began. 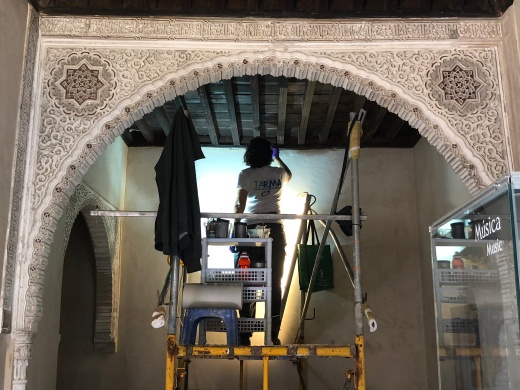 Inside the Palacio Dar al-Horra

Outside the Palacio Dar al-Horra 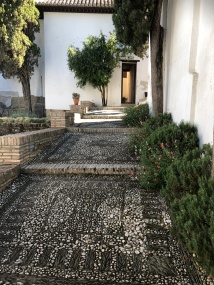 Alhambra towers over us at every turn, it must have been a fearsome sight in the 13thand 14thcenturies. There is a spectacular view across from the Mirador of St Nicholas; best visited at sunset with the flamenco guitarists and the last of the sun’s rays on the palaces.

The churches and convents we wish to visit are all closed (never seen so many convents, our guide tells us they were like factories for producing women). The so-called main Tapas Route is now stuffed with North African eateries and shops selling Indian and Moroccan leatherware. Not for us. Eventually we find a tapas bar which gives away the traditional free tapas with a drink. More wine please! 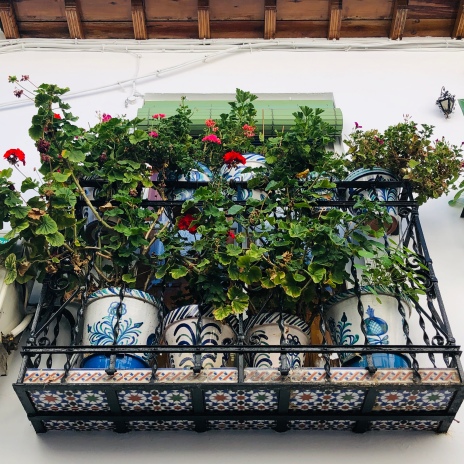 Locked out of the convent – quite right too!

We end up, via an old caravanserai, in the extraordinary Casa de los Tiros, with its muskets (tiros) projecting from the roof, and its ornate ceiling a tribute to Ferdinand and Isabella, who died in 1516 and 1504 respectively, and whose tombs we visit in the Royal Chapel, with its florid Gothic architecture in honour of the liberators from Islam. 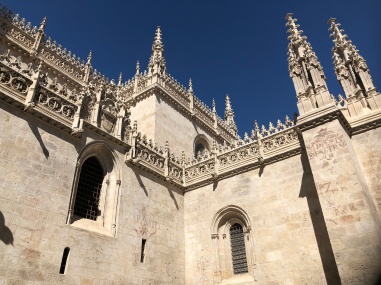 entrance to the chapel 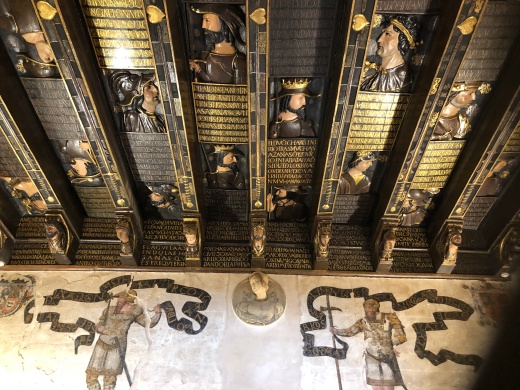 The next morning our guide turns up at the appointed hour and whisks us through the complicated entry procedure, including passport checks. We spend at least an hour learning the history of Alhambra: it was built on a hill for security, water and defence, but the main reason was that, while the Nasrids were intellectually strong, they were physically weak and built the first fortress (Alcazaba) as a kind of ‘hands off’ gesture. As in Córdoba, it is based on the concept of building recycling, first over an Iberian village, then a Roman settlement, the basis for the  baths and some of the aqueducts and water cisterns. Recent discoveries are a Visigoth church and a synagogue.

In deference to their own vulnerability the Nasrids aimed to be self-sufficient for its 1500-2000 inhabitants (at one point it was the largest city in Europe), and the gorge between the Generalife (trs. garden of the architect king) and Alhambra was – and still is – terraced and abundant with fruit and vegetables. There was a park outside the walls full of animals for meat and milk. Even today we see squashes, grapes, artichokes and fruit trees.

You can still see the vegetable gardens in the dip between the two sites. The terraced gardens (below) were also made over to cultivation

The gardens today and the palace are lush with water features and flowers – cosmos, marigolds, red and blue salvia, canna lilies, agapanthus, gaura, busy lizzies, weigela, with plumbago, bougainvillea and the pervasive sickly-sweet jasmine cascading over the walls – apart from the hordes of Chinese tourists who outnumber all other visitors in their lacy gauze numbers and selfie sticks -banned but to no avail. 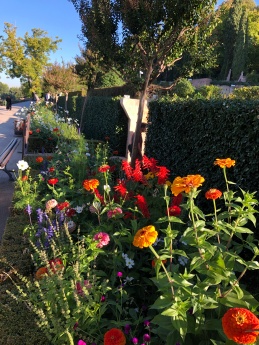 The summerhouse at the end contains some fine stucco work, but the formal pools, arcades and plantings have been added in the 20 century; they were laid to vegetable cultivation in Nasrid times. There remains an ancient water channel coursing down the hill feeding the central cisterns. 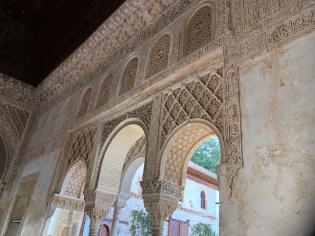 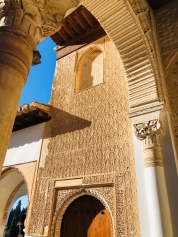 ‘And now for the main course,’ says Jackie as she leads us past Charles V’s hideous box-like palace with his two headed iron eagle and lion motifs decorating the walls. He lived in Alhambra for 6 months  c 1527 with his new bride, to celebrate the triumph over Islam. A giant snub by Christian to Muslims perhaps, especially as it was built over Nasrid palaces, although maybe the square shape (a Muslim symbol) was in deference to  its history. 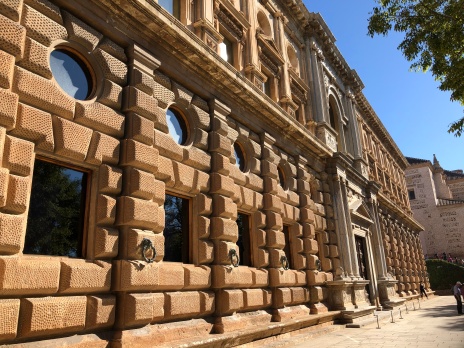 Charles’ V monstrosity built to make his mark, the iron rings are the eagle and lion motifs

Alhambra, started by Mohammed I, took 180 years to build, ten sultans out of the 24 Nasrids contributing to its splendour, a celebration of Islam with its repeated inscription ‘Only Allah is victorious’ – though Charles V defaced some of the tiles and ceilings with his own motto, Plus Ultra. 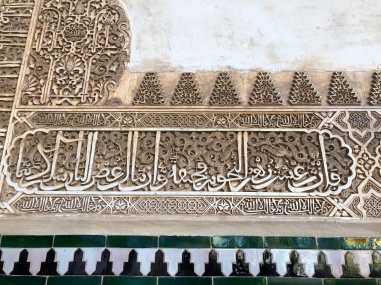 The first edifice was the majestic Alcazaba or fortress which dominates the site and overlooks the valley below. It served as a warning to potential foes, but with the water system and plethora of bath houses, combined with the Muslim obsession for cleanliness, it was the only city in Europe that avoided the Black Death. Nothing much remains apart from the outside walls. 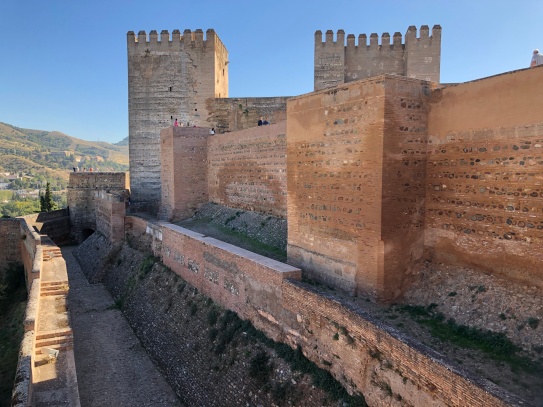 The walls of the ALcazaba

Ruins of the garrison houses by the main gate 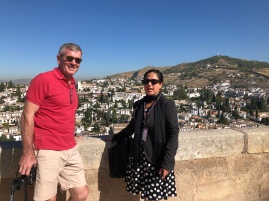 Ross with Jackie on the walls of the Alcazaba

Its golden age was the first half of the 14-century, celebrated by the Palacio de Comares,  where the mujedar style came into its own, with its hybrid symbols of Nasrid seashells, representing water, interspersed with cedars from Lebanon for the ceilings and local marble for floors and columns.

The only remaining original marble floor

The ceiling in the Palacio de Comares 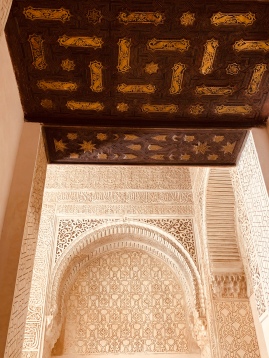 Cedar wood ceilings in one of the corridors 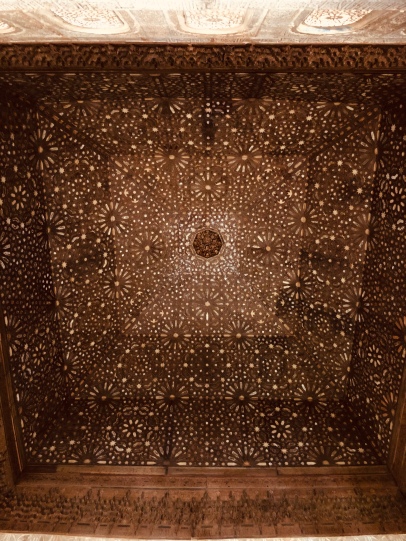 The ceiling in the Palacio de Comares

The tilework, as well as the intricate stucco plasterwork adorning all the walls and courtyards (heavily but sympathetically restored), pays homage to the brilliance of the Islamic mathematicians with the triangle, square and rectangle containing the decorations…the practised eye will get the symbolism.

I am not going into a room-by-room description, my photos will take you round! But here are a few highlights. 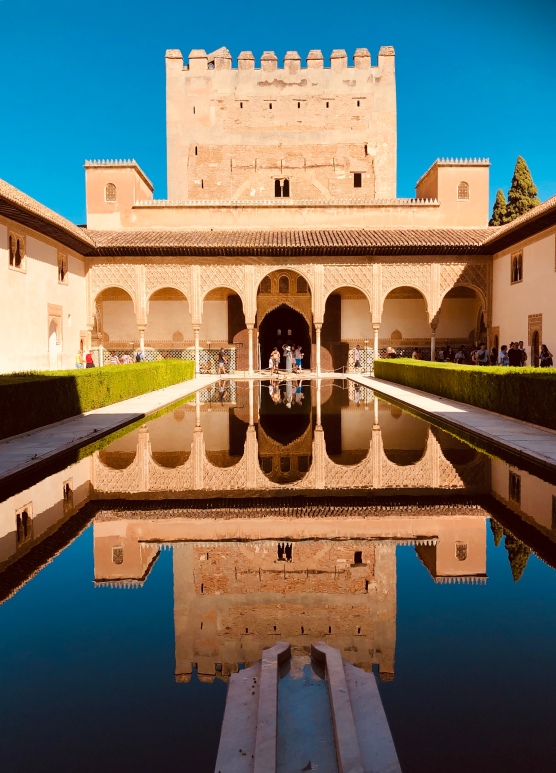 In the Patio de Leones, built by Mohamed V after his rescue from banishment by King Peter 1 of Castile who lured the usurper to Seville and sent his head to Mohamed V, the twelve tribes of Judah are recognised in the statues that surround the fountain, two with the Jewish triangle on their respective heads. In the ceilings, paintings and honeycomb moulding, formerly decorated with lapis lazuli, are an architectural marvel of construction. 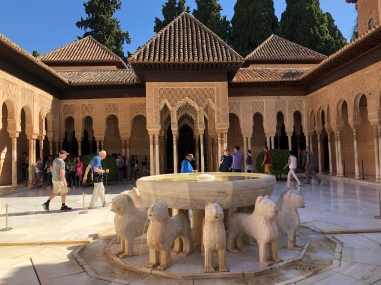 the 12 lions in the eponymous patio

dEtail from one of the porticos

The elegant portico on one side of the Patio de Leones 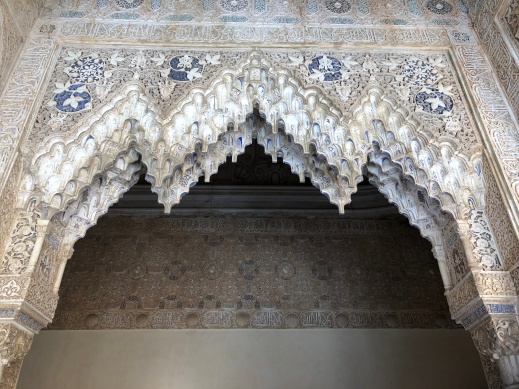 The honeycomb ceiling, picture does not do it justice

The delightful room of the two sisters (Sala de dos Hermanas) was a quiet space for the Sultanas to sit and look out into the garden. The twin marble slabs are topped by a ceiling containing 5000 tiny moulded stalactites.  The whole complex was the Nasrids’ last hurrah before their annihilation.

Looking out onto the gardens in the Sala de dos Hermanas

The window seat in the Sala de dos Hermanas

In 1492 Boabdil ceded power to Ferdinand and Isabella and in 1581 all the mosques were ordered to be converted into churches (apart from the Mesquite in Cordoba as we have seen) and between 1609 and 1613 300,000 Muslims were expelled from Spain. Once Ferdinand and Isabella had ousted the Nasrids their trademark arrows and a yokes are also inserted here and there to make the point. 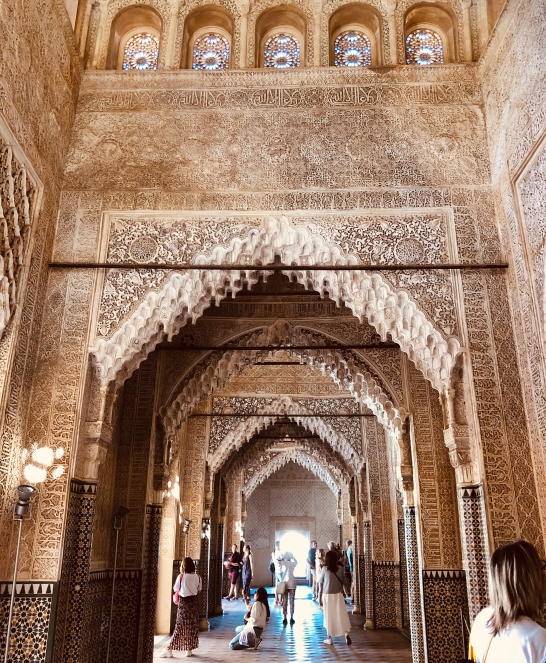 Alhambra was a key to Nasrid power, and that symbol is to be found at some of the monuments, cleverly integrated into the design – above a gate, or even as a water feature. Luckily – apart from Charles V’s monster – these new rulers retained Alhambra with their minor modifications, although it must have been uncomfortable with its low windows and ground-level seating, not at all suitable for the swishy gowns of Spanish court ladies! 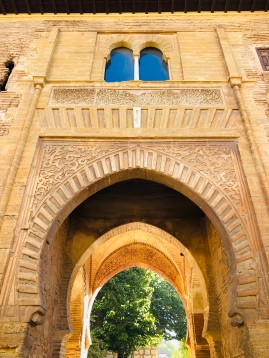 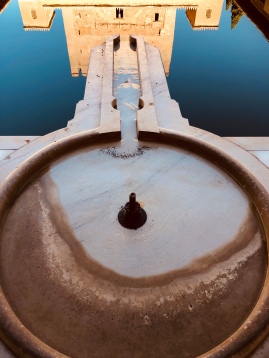 After over four hours with Jackie we part company and have a well-earned lunch in the old convent, now a Parador. Then a final wander round the gardens before returning to the hotel where we meet an exasperated Saudi woman who has come all this way – and no ticket! We give her our contacts and wish her luck. Interestingly she tells us that all the other hijabed ladies we have seen – there are a number of Muslim visitors – can’t possibly be Saudi: ‘in Saudi we don’t cover up! Only between the car and the supermarket! Max 30 minutes’. Well you live and learn.

view towards the Palacio de Partal

All in all a wonderful week, with glorious weather and spectacular countryside.

Total over 6 days: 76 kms! It’s good to forget one’s afflictions, this felt like a kind of pilgrimage! One can but give thanks for continuing good health. 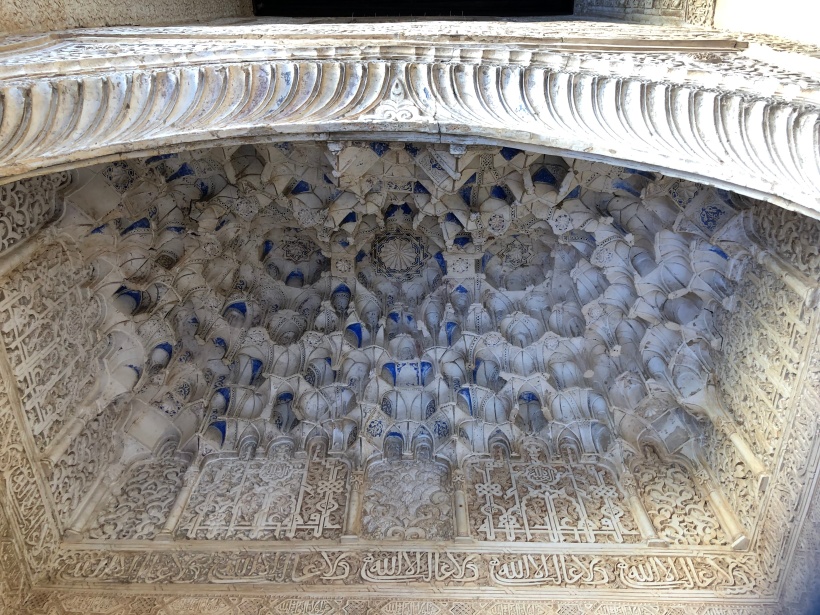 One of the lapis-lined honeycomb ceilings with the classic inscription

4 thoughts on “A week in Islamic Spain 3: Granada & Alhambra”