Today, 25th October, my father would have been 93 and here I am in Prague, retracing his childhood haunts. I have asked a genealogist, Julius Muller, who has helped me trace my Prague relatives before, to accompany me on my trip today. In the research I am doing for the book on my Jewish family history, I came across the addresses where my grandfather lived as a student, as a young lawyer and then banker, and finally as a diplomat and family man when he returned to Prague after five years in Berlin. 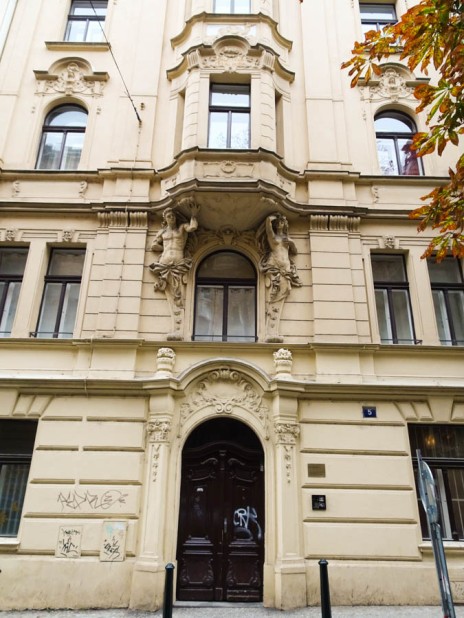 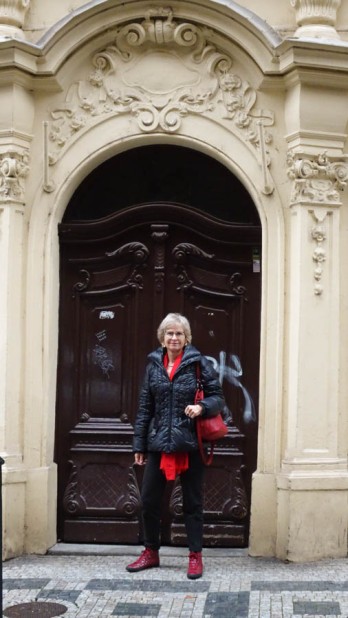 In the doorway of Navratilova (House of the Golden Dromedary’ 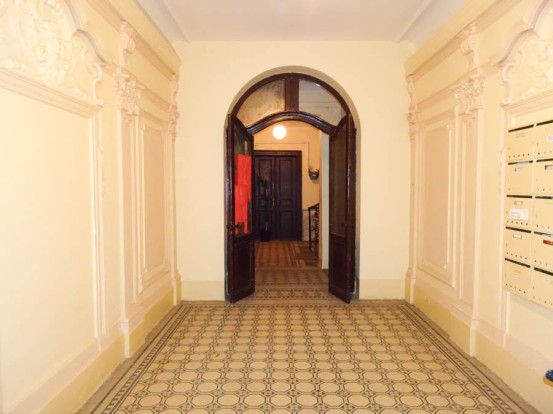 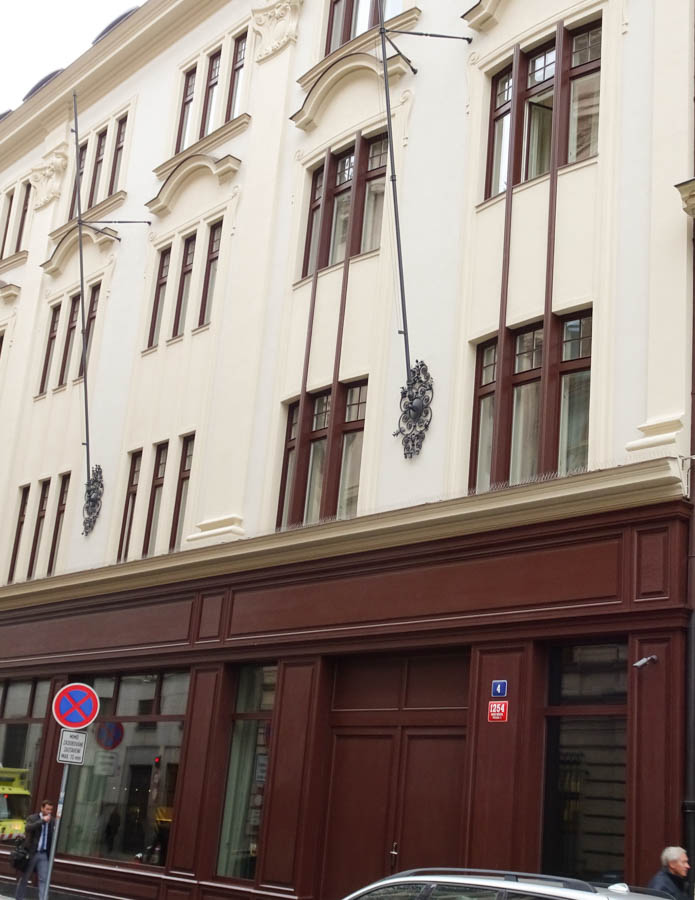 The Escompte Bank, now a hotel, in Senovaznana

I am nearing the end of the Prague part of the book  and feel it would be useful to immerse myself in the streets again, to try and imprint that sense of place that writers need to feel close to their subjects. 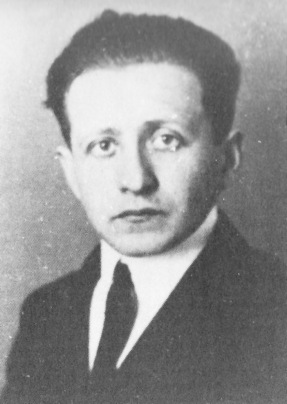 It’s a grizzly sort of day, and Julius meets me in the hotel, clad in a raincoat and jaunty hat. To keep the rain off. We hop on a tram, first stop Café Arco, where all the writers, known as Arconauts, used to hang out. My grandfather, Hermann Ungar, would brush shoulders with Kafka, Max Brod, Egon Erwin Kisch, Paul Kornfeld, Otto Pick, Oskar Baum, Ernst Deutsch and Johannes Urzidil. Now the café is only open to state functionaries, ‘How Kafka would have laughed’, observed Julius. 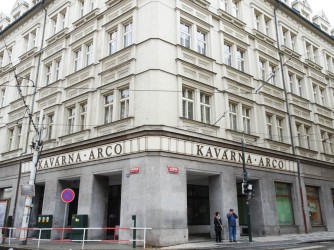 The Prager Tageblatt published most of Ungar’s short fiction

Later we stop at the recently re-opened Louvre and I sit in the billiard room, where Ungar, like his character, the psychotic Franz Polzer, would sit and watch the players, rarely partaking himself. We lunch in another café, the Savoy, close to my grandparents’ final house, and the one where, Julius discovered, Ungar’s body was laid out in October 1929. It is 87th anniversary of his death, almost to the day. Celebrating birth and death on one visit. 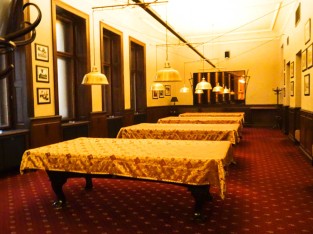 The Billiard room at the Louvre

The Louvre is hardly changed…

Art Deco ceiling in the Savoy 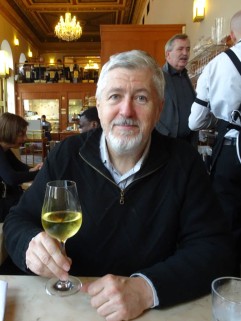 Julius in the Savoy

A funerary sort of urn inside the Fibichova flat

It’s also noticeable how there is no evidence of Hermann Ungar in Prague, single photos of other faces adorn the walls of the Palace Hotel, there is even a plaque on his home in Smichov in memory of another Czech writer – but none to him. Julius and I agree we must do something to address this when the book is published, to put Hermann Ungar back centre stage of this city where he wrote so many of his works. 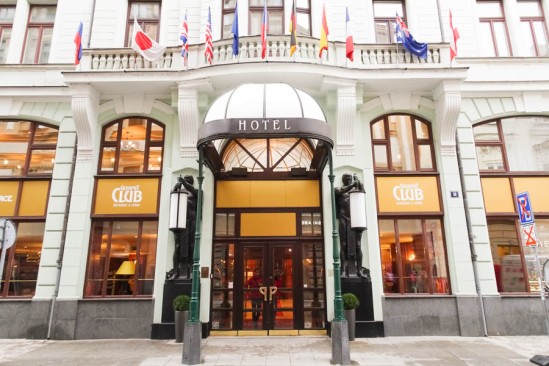 The Palace, which the Tageblatt journos would use as a meeting room 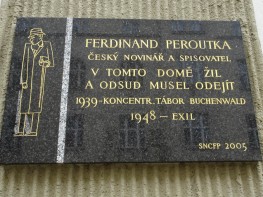 The imposter on Ungar’s building in Matousova!

Heroic friezes were popular at WW1; opp the Palace Hotel 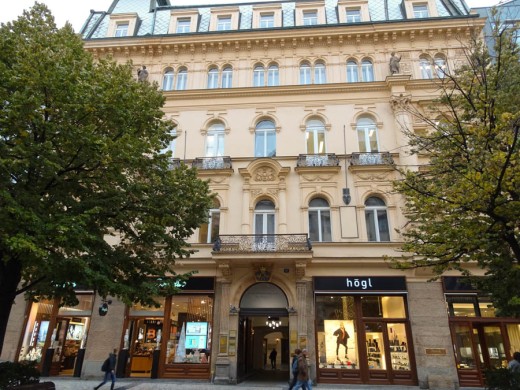 This was the Continental cafe – now luxury offices 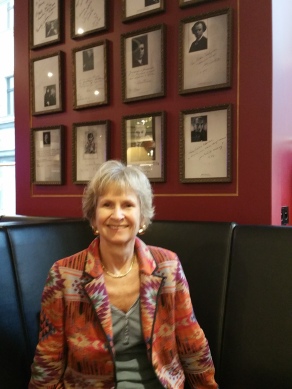 More photos in the Palace – but no Hermann!

We go from street to street, Julius gamely ringing doorbells and we gain admittance to most of the apartments: despite attractive exteriors the insides, while retaining their Art Deco charm, are mostly run down and dank. My great-grandparents’ luxury apartment in Smichov has disappeared altogether, replaced by an ugly concrete building in 1938. 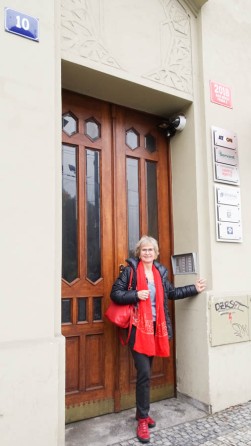 In my father’s footsteps

Julius ringing the doorbell in Smichov 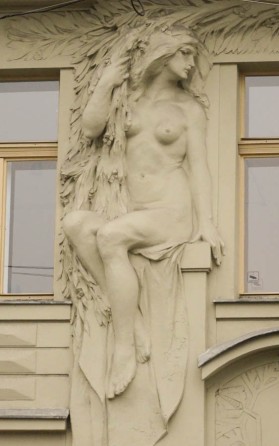 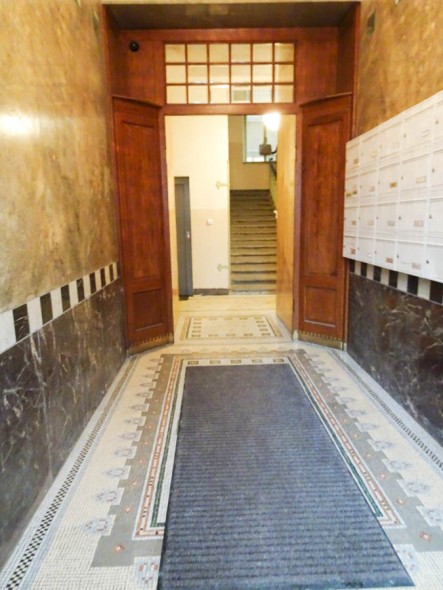 The Rieger Quay apartment where my grandmother and sons moved after Ungar’s death. All art deco inside..

And art deco outside! 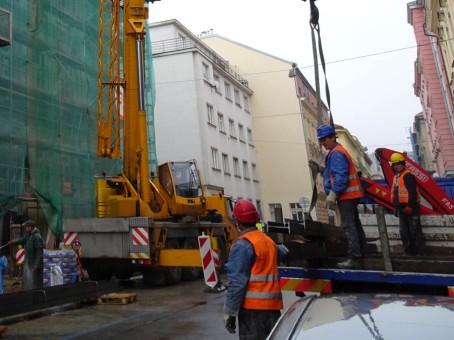 Grey block, centre, used to be my great grandparents’ luxury apartment in Smichov

But no luck trying to gain admittance to some of the public buildings, such as the old Continental Café, now no longer, the site of the Prager Tageblatt, the newspaper which published many of Ungar’s prose pieces, and the marvellous Art Deco dance hall in Smichov: the security men are grimly adamant, ‘no admittance’. Julius tries his best, but learns they are all fearful of being sacked. The Kafkaesque theme continues.

This dance hall is now a Tesco!

It’s strange to walk streets, and sit in seats my grandfather and father might have graced. From time to time Julius will observe, this is the route Ungar would have taken to work, or this square probably looks exactly the same as it did when your father was a boy. Prague has changed very little in so many ways apart from the hordes of tourists – the buildings are magnificent, and although the lower shop fronts have gone, replaced with garish glass, cast your eyes upwards and the plaster work and sculptures remain.

The Escompte Bank, now a hotel, in Senovaznana 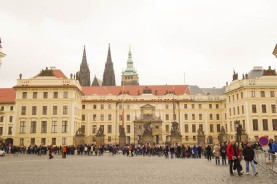 Prague Castle, where Ungar worked in 1928

The Powder Tower in the Old Town

On Ungar’s walk to work

As we pass the island where we scattered Dad’s ashes in 2012, I take a photo and remember him. I also ponder what I feel about it all. Julius asks me if I feel Czech. I reply I feel more Czech than Jewish, as I was not brought up religious and anyway I have now lost what little, if any, faith I had following Louise’s death. Such a bereavement usually affects people one way or another – you either turn to religion or against it. In my case against. 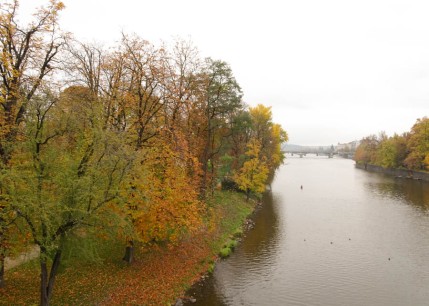 Autumn colours on the Vlatva River

Island where we scattered Dad’s ashes

I am on my own for the following two days – on the first I take to the streets again and walk up to the Castle where my grandfather worked for a brief spell between depressions in 1928, before resigning and devoting himself to becoming a full-time writer. They are changing the guard, and there are flocks of tourists; the soldiers are also rehearsing for National Day on Friday, and so I am brusquely ushered out by a look-alike from the secret police. A Chinese bride, all clad in white, with her groom, look disappointed – to come all this way and for it to be closed!

Changing the guard – still looks very Kafka-esque if you ask me! 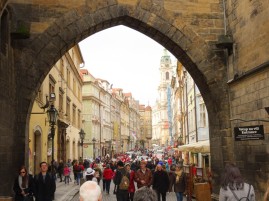 National Gallery up at the Castle 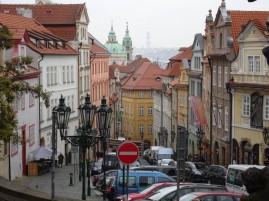 Walking down from the Castle

On my last day I plan to visit an old Czech friend of Dad’s, now in her 80s, almost blind. She too has just lost her child – Michael, a lovely man I remember well from previous visits. However, at the last minute she has to cancel – her sister-in-law is dying in hospital. Life is hard.

Mechanical figures from the famous clock in Old Town Square

These chaps pop in and out every two hours…

So I take the opportunity to further explore my Jewish heritage and visit the Prague synagogues in the Joseva quarter.  In the Pinkas synagogue the walls are inscribed with the names of the Holocaust victims – although Boskovice is not listed as a separate town. However, I do find some Ungar names, from Brno, where I know we had relatives. It seems that the Ungar family exclusion conspiracy continues as my great-grandmother and great aunts and uncles are missing…

Imagine my surprise, however, when in the Old/New Synagogue I find pictures of my illustrious Rabbinical forefathers: R Shmuel ABD Prague Halevi Landau  1756-1834, and his father Yekhezkel ba Hoda Bi Yhuda Landau 1713-1793. They were both Chief High Rabbis so you cant get much more Jewish than that! 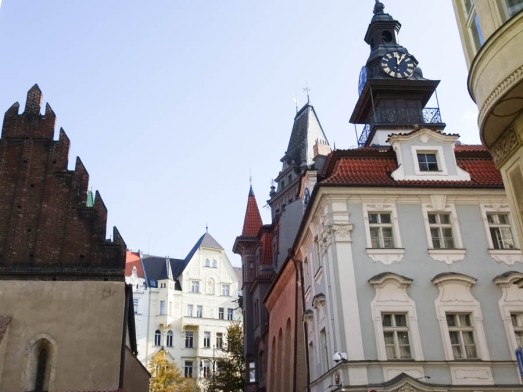 Inside the Spanish synagogue

Statue of Kafka outside Spanish synagogue for some reason! Perhaps he worshipped there

The sun is shining and I stroll back into the Old Town Square for a bowl of goulash soup and some more picutres before leaving. I realise, after a few meals out, that whatever the heritage, you can’t take the Czech out of the girl, as we tuck into Pilsner lagers and roast goose and dumplings – my father’s favourite! A fitting way to remember him. 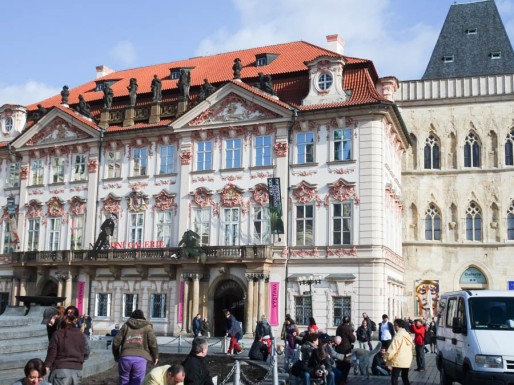 From the Charles Bridge 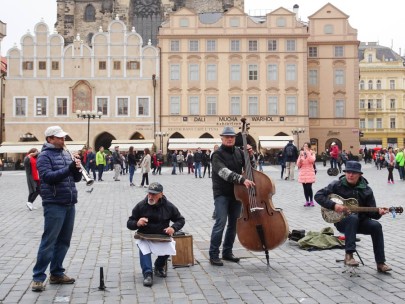 You can’t take the Czech out of the girl – roast goose & red cabbage!

Ross and his Kenyan colleague John enjoy their Czech beers!