Red is taking over – Japanese maple in Basel. Bored with pics of Trump and Clinton

I do not feel any sense of smugness (well, a little actually) when I remind you that I forecast both Brexit and Trump victories, way back….

Friends were shocked first time round with Brexit, and two nights before the US election I was having a lively discussion with a judge and a barrister and repeating my forecast: ‘No! It’s simply not possible, how can Trump win? Look at the Black and Hispanic vote, the demography, Trump’s misogyny’…all the arguments that rational people spouted in the run up to the election. I even had a discussion in early September with a US ambassador and old friend  of Obama, who said that the  ‘math’ didn’t work; if Trump was elected, he added, he was emigrating! My staunchly Democratic family in DC failed to see this coming too – for logical, mathematical reasons, imbuing the American electorate with qualities of common sense that the establishment has sacrificed.

Well, sadly, I was dead right. I woke at 2.39 am yesterday morning and watched in horror as the USA turned red. Hillary was ahead for one brief interlude (after California) but then Florida and the Midwest came in and that was that.

I then posted  my ‘I told you so’ update on Facebook and was challenged to explain why I thought a little  anthropology could have saved the day. Anthropologists are trained to understand, as Claude Levi-Strauss put it, the universality of human thought, although he applied it more to mythology. But the premise is the same.

I have since listened to the commentators trying to make sense of it all – it’s easy to be wise after the event isn’t it – but really the Dems should have paid attention to Michael Moore when he posted his 5 Reasons Why Trump Will Win (which I only read yesterday).

Moore is, I suspect, at heart a fellow anthropologist – he understands people. Years ago, when he was virtually unknown, I remember sitting in the Roundhouse watching him on his anti-capitalism tour as he successfully exhorted people to get up  and rip in half either their  credit and /or loyalty cards.

So this is the anthropology argument: man (in the most generic sense, no misogyny here intended) is programmed in line with all  species’ evolutionary needs: we need food and shelter above all to survive. Despite the passing of millennia, this basic instinct has not changed, it has just morphed into a 21st century context.

What we see, first in Brexit, and now in the US, is the failure of big government to adequately care for these human needs. The pejoratively termed ‘little people’ have been squeezed by the political elite – of all orientations – into a corner. They are jobless, homeless in some cases, or living in inadequate circumstances, and do not have enough money to feed and clothe their families. Welfare has been cut to the bone and they seek to cast blame. The incumbents of office are the obvious targets, followed closely by immigrants, who have come to seek a better life (or so they think), and are prepared to work hard for it at much lower levels of payment. They are the soft targets, and I fear for their safety in our newly-discovered global xenophobia. I won’t even discuss the refugee crisis in Europe, but it is a prime example.

It doesn’t matter who the messiah is – Farage, Boris or Trump, warts and all – but he comes along and says he will change all this over night. He will make America  or Britain Great Again. He will give them jobs and foster their self esteem. In the US, he will cut ties with the enemy free trade and bring manufacturing home.  He will get rid of all those who are to blame for their current malaise – from incumbent government/leaders to these nasty people who are stealing their jobs. Simples.

Add into the US mix what Moore calls The Last Stand of the Angry White Man (a reaction to 8 years of a Black President and a rising non-white population),  and a good dollop of misogyny  (despite the 70% female electorate, of which 53% voted for Trump), xenophobia (competition for jobs) and social media (where much of the election was played out) – and you understand how the numbers worked for Trump. Even Blacks and Hispanics were able to put basic human needs over rhetoric, and we have seen here in Britain how large parts of the established Asian community and incumbent Eastern Europeans voted Brexit as they feared huge waves of competition threatening their livelihoods. All the messiah has to do is to stir up all these emotions and the electorate follows blindly.

Trump cleverly understood that all that mattered was the Midwest, traditional Democrat territory – Ohio, Michigan, Pennsylvania and Wisconsin – where unemployment and poverty are rampant and where the Dems offered no panacea and no answers. The establishment is tarred with the Goldman Sachs brush, anathema to the unemployed. And Hillary is part of that – no appeal to blue-collar workers or the young, with her safe and boring running mate. Why didn’t she choose Bernie or someone young and dynamic who would help deliver a different message, who understood the disaffection of the ‘little people’? I haven’t studied the stats, but I wonder how many young people stayed away or voted for one of the alternative candidates (in Florida enough of them to lose it for Hillary, so I read) and if this fatal combination of denial with entitlement was what cost Hillary the election.

Now those wise-after-the-event pundits are talking about protest votes; but it was all there to see for those who understand how the human mind works. Anthropologists like me forecast the ‘Fuck-you Establishment, I will use my vote any way I like just because I can, and in this you have no power over me.  You have ruined my life up till now and now it’s pay back time’.

This is terrifying lesson to all political elites: they need to understand their electorate better, and to cater for the basic human needs that define our existence. It’s about time they listened, and the next four years will be tough for the US, but at least they have the chance to open their ears and learn. In Britain, the stakes are so much higher: once we leave Europe, it is forever. As I said to the US Ambassador, all politicians need an anthropologist on their team. He said he would remember that.

So to cheer us all up here are some photographs from my birthday weekend in Basel! 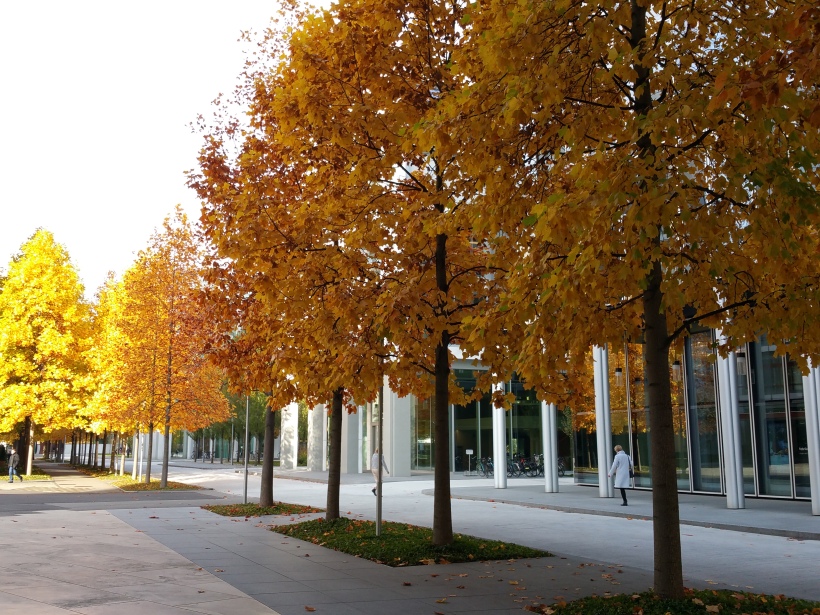 Vineyards in the autumn seen from  Fondation Bayeler

9 thoughts on “Why anthropology could have stopped Trump!”