Week 2 of Unwin Tours finds 11 survivors arriving in Nairobi on the second day of the Westgate siege. Nairobi airport, despite great anxieties after the fire that destroyed the arrivals hall, is a doddle and we are soon ensconced in the Country Lodge. Decided to miss out on a planned curry in Westlands, the area of the siege. It seems everyone has the same idea, the hotel restaurant is packed with people not daring to venture out. 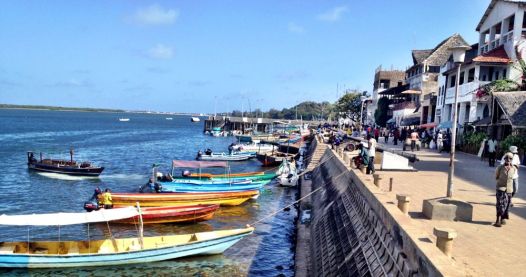 Another day, another small plane. This time we are fleeced for excess baggage but we are so relieved to be out of Nairobi we don’t care and cough up.

I have been going to Lamu since I was eight: my mother had a long love affair with the island and I was dragged off there at every opportunity during my school holidays, kicking and screaming. What eight-year old wants to visit anywhere which has no electricity, no proper loos, no cars and is so backward, not even coke has arrived? It was so hot we used to sleep on mosquito-infested roofs and bring our own food – tea with condensed milk and that old East African picnic favourite, tinned Plumrose liver pate!

Donkeys are the main form of transport still

Her interest was archaeology and her boyfriend was excavating the ancient Islamic settlements on the coast, which date back to the 9-10 centuries. They were in fact city states which formed part of the lucrative dhow trade from India and the Gulf, carrying Chinese pottery, copper and other oriental goods, in return for limes, copra and mangrove poles, which were needed for building in the Gulf.

The main square by the old fort/prison; Renoir-esque dont you think?

While Manda Island and Pate have declined, although the ruins can still be visited, Lamu town, and now Shela, have thrived and grown. The dhow trade is long gone since the Gulf discovered oil, and tourism is the mainstay, with Shela being a haven for the jet set: Princess Caroline of Monaco had several houses there, and there are some exclusive beach houses where the likes of Euan Macgregor and other A-listers visit. 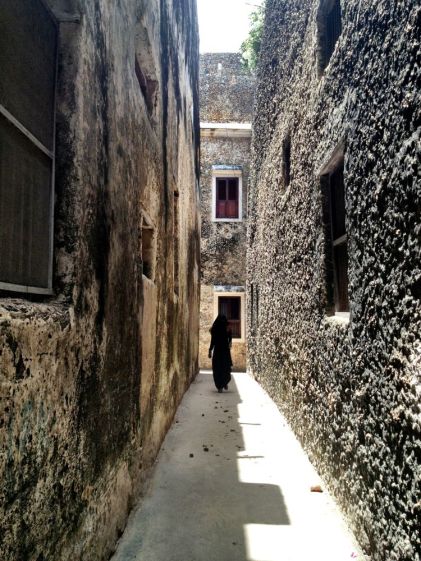 A typical back street in the old town

When I was a teenager, Lamu became much more attractive: bang on the hippy trail around Africa, visiting now became exciting. Mum now had a house in town, and was part of the expatriate community of eccentrics who made Lamu their home. Of these only one or two now remain but Mama Sheila is still remembered by some of Lamu’s older residents who rush up to greet me when I visit, and no one is more delighted to see me than her old housekeeper, Ali Maulidi.

Dear old Ali Maulidi, so happy to see us all

The tree where I buried Mum, on Manda Toto

So here we are after an absence of about four years: the last visit was to bury Mum’s ashes on Manda Toto, the island where she camped while digging on Manda and was happiest. One of my missions is to reunite my father and Louise with my mother and leave them all together in a peaceful and remote resting place. 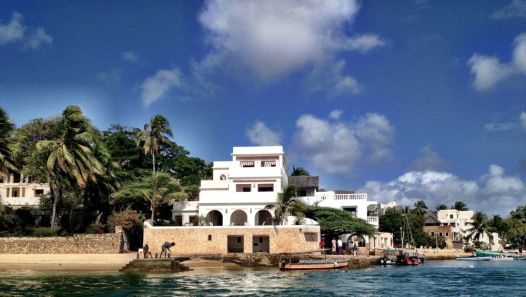 I have rented a house in Shela on the waterfront so we can be part of everyday life while enjoying the benefits of being out of the hot town and near the beach.

The house comes with four staff, and we are thrilled to discover that Amos used to cook for Princess Caroline. The food is consequently quite delicious – seafood in all guises, a fusion of local with a touch of continental sophistication.

The only downside is that on arrival we discover the single bedroom is no more than a cupboard: no door, no windows, no fan and no room to swing the cat that has nested on the pillow! After what in Swahili we call a ‘matata’, we find another room in an adjacent house where one couple moves quite happily: after all it has an ensuite infinity pool overlooking the sea! Lamu has come a long way since the long drop ‘choo’ of my youth. 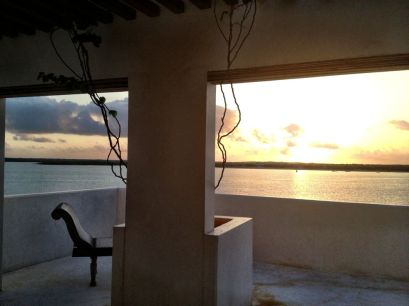 Dawn from my balcony

Putting the ‘shauri’ behind us quickly – we are here to enjoy ourselves – we soon settle in to island life. The day kicks off at dawn, with the lone fisherman on the pier below the house, who feeds the local cats when he gets lucky; an early morning swim; a breakfast feast of fruit and fresh passion fruit juice; a wander into Lamu town, where little has changed since the 18 century, to the beach, more swimming; delicious lunch – perhaps a little grilled calamari, or white snapper; a siesta; fishing; a little idle shopping in Shela; sundowners – naturally; and dinner – BBQ prawns, a whole fish, or spicy and coconutty Swahili food – fish curry, spinach, lentils, coconut rice, followed by homemade sorbet. What could be better? 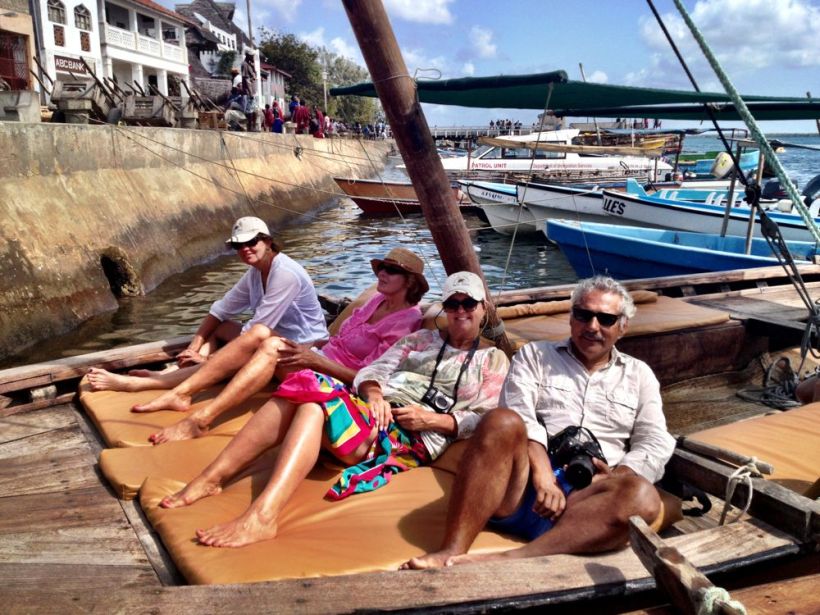 Buying the fish in Lamu! Annie, Christine, Diane and Diego

Diego, Christine and Ross on the mashua

We set off in two mashuas for our ashes trip: first a stop to snorkel in the Pate channel; some gentle fishing. The crew grill a big tuna-like fish, marinated in garlic, black pepper, chilli and turmeric, knock up a coleslaw and chapattis and – hey presto – a scrummy lunch! We have brought beer and wine. It IS the simple things that give so much pleasure…. 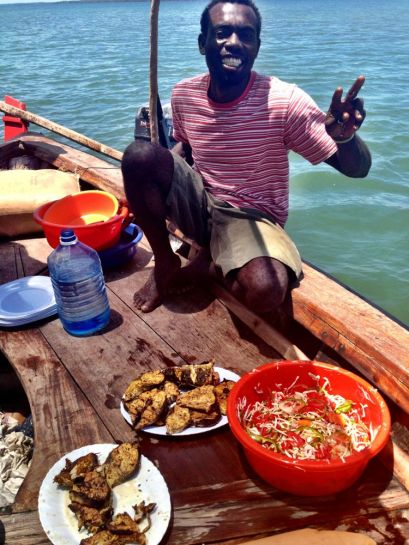 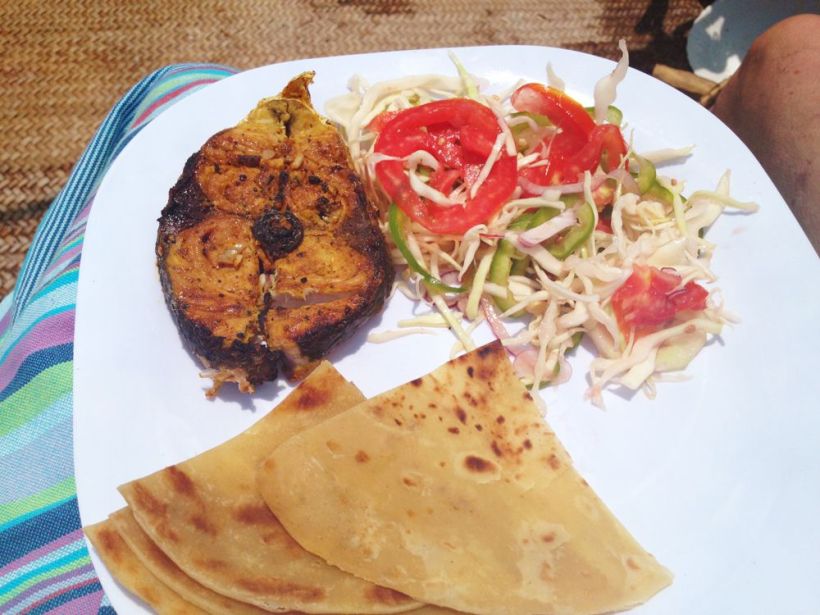 The tide is going out so finding the casurina tree that marks the spot is a little testing, but once found, we jump ashore and dig a little hole and pour in the contents of our two tea caddies that I have nursed round Africa. It feels perfect, though immensely sad. But, as a friend said, so right to leave Louise in the tender care of both her grandparents.

A jasmine corsage, bougainvillaea from the garden and a sprig of oleander

Afterwards on the beach

Even in paradise, the real world intrudes, and some of our party are anxious about the proximity to Somalia and the El Shabaab terrorists. We are a stone’s throw away from where a French woman and the poor English couple were kidnapped. While I feel at home in Lamu, I realise that others could not feel so secure. So I depute Rick to interrogate the District Commissioner on the status quo. He comes back reassured, though later events in Nairobi of course confirm my sneaking suspicions that the Kenyans are completely out of control. However, I still maintain that Lamu is safe: it is such a small place and the comings and goings are closely monitored, according to the DC. 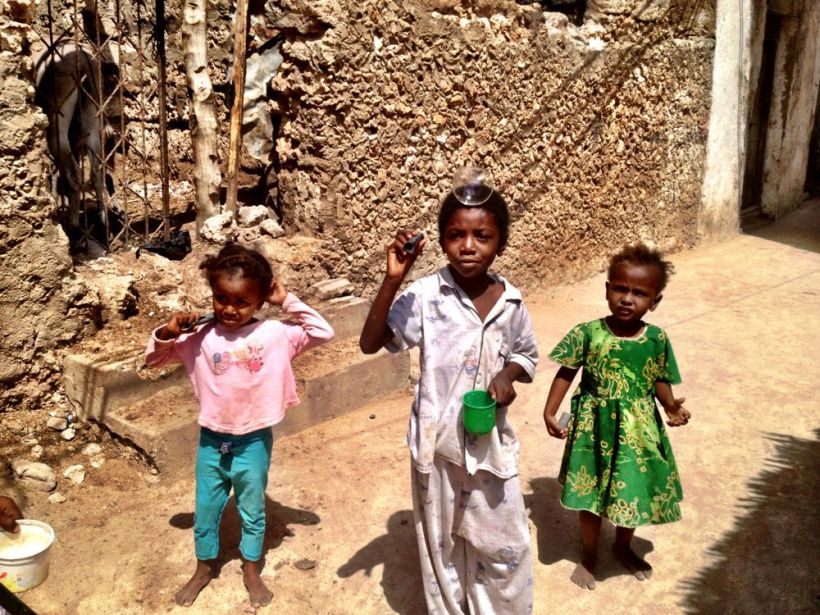 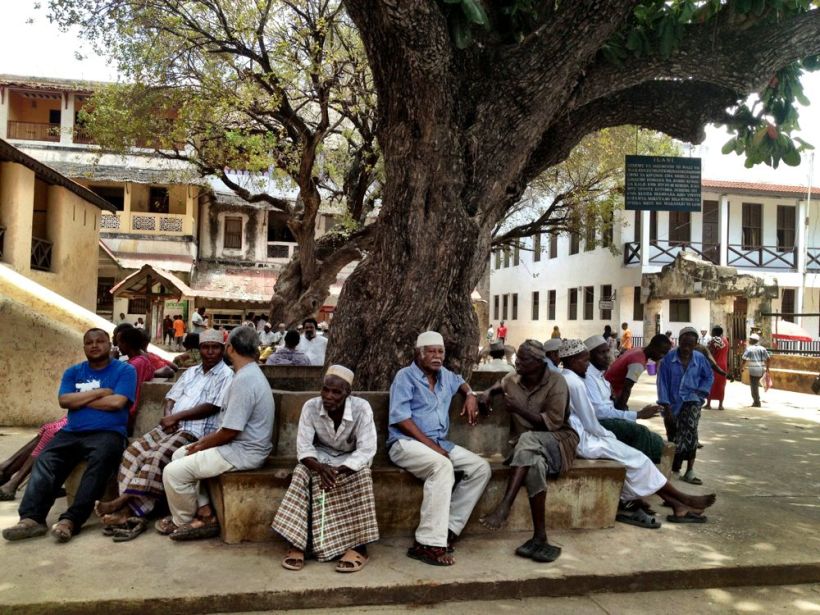 Our guide Ali with his family

For me, Lamu has maintained its chaotic charm: noisy, shouting people; little donkeys everywhere (shame about the donkey sanctuary); wide-eyed children playing in the street – Jambo, jambo; heavily veiled women are a new phenomenon, though quite often you see the flash of a smile and, as in all cultures, where you greet and talk to people, the rewards are immediate; men sitting round in the main square passing the time of day. And still only three cars, including the dustcart. The water front has barely changed, with one exception: an awning announcing Pizza and Teppenyaki. Oh dear. 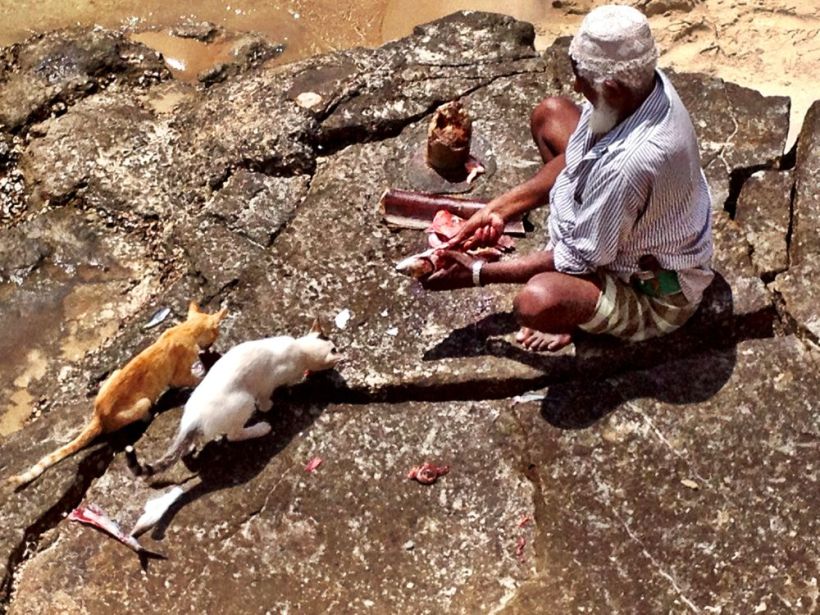 The old man feeding the cats outside our house

And so like all good things, our time draws to a close. Strongly recommend Forodhani house, but for no more than 5 couples. Thanks to Amos, Francis, Festus and Kosmas, and to Babu British, for looking after us so beautifully. Lamu remains my heaven on earth, along with Mana Pools, both places I will keep re-visiting until I, too, can be laid to rest under the casurina tree on Manda Toto. 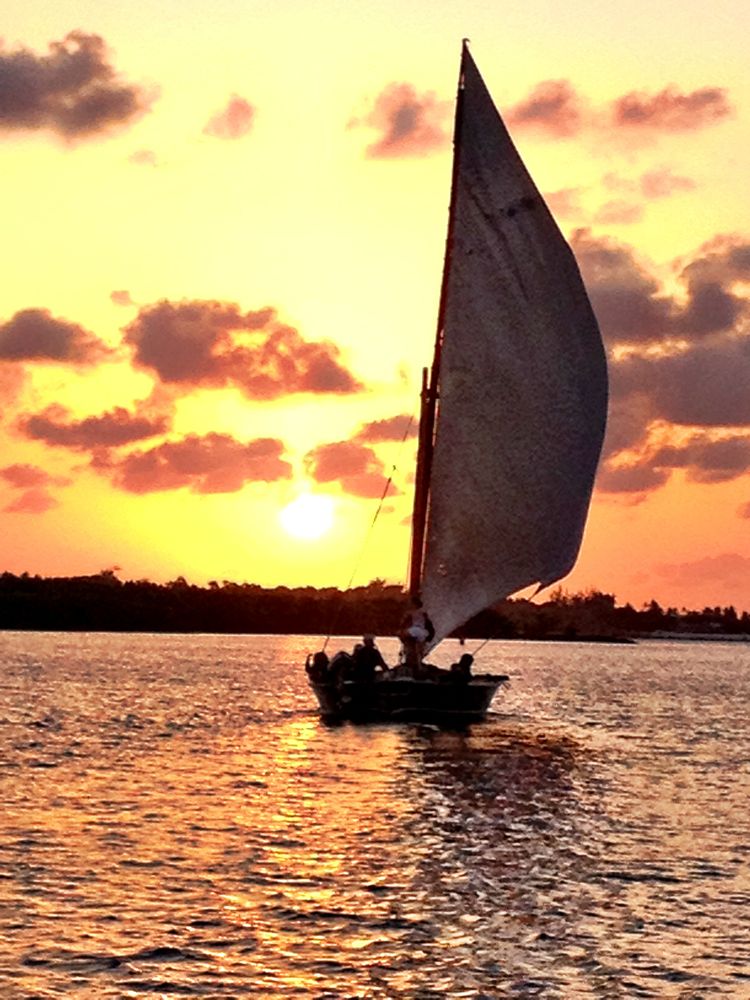 Sailing into the sunset

Feeding time at the zoo!

The guardian of our house!

Amos and the prawns

Ross and Annie about to snorkel

Chrsitine, me, Tim and ANnie

waiting for news from the DC!