My host Jane and I meet bright and early – 7.45 am to be precise – at Sloane Square to get to the gates before the throng, or so we thought! Our expectations are soon dashed as it seems the whole world has the same idea. We wander through the stalls selling all sorts of garden-related stuff (but I am in a no-buy mode) until we hit the show gardens. 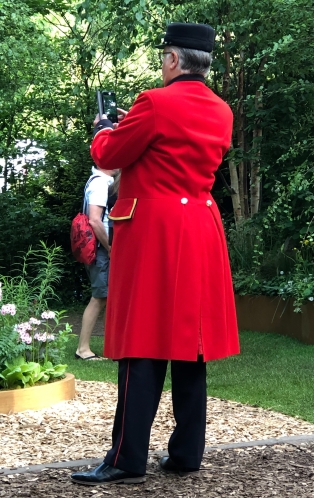 The Pensioners love the show, and can be seen everywhere, taking photos and chatting away

The  first is Andy Sturgeon’s M& G Garden, which should have been a  tranquil spot with its ancient rock sculptures and subtle shades of green, reflecting the British countryside’s ability to re-generate itself over the centuries, but it is so packed we can hardly see a thing…it was the Best In Show, so I guess that’s an excuse (and this is the morning after). These are the only two shots I could muster without people spoiling the scene!

We also love the Resilience Garden by Sarah Eberle – a study on how gardens can be resilient against climate change, pests and diseases, which won the Best Construction category. We admire the  meadow-style planting, with familiar wild-flowers from the hedgerows. Somehow manage to get quite a good shot of this!

But the highlight is the private tour of Thomas Hoblyn’s Dubai Majlis garden, which narrowly missed out on a gold by 3 points, much to Thomas’s chagrin.

We love the spaces in-between, to reflect the wind-blown sand-dunes and the calming water feature, where the water trickles (bottom right) from the upper level (left) to an oasis-style pool (top right and centre right)) in the centre of the garden. 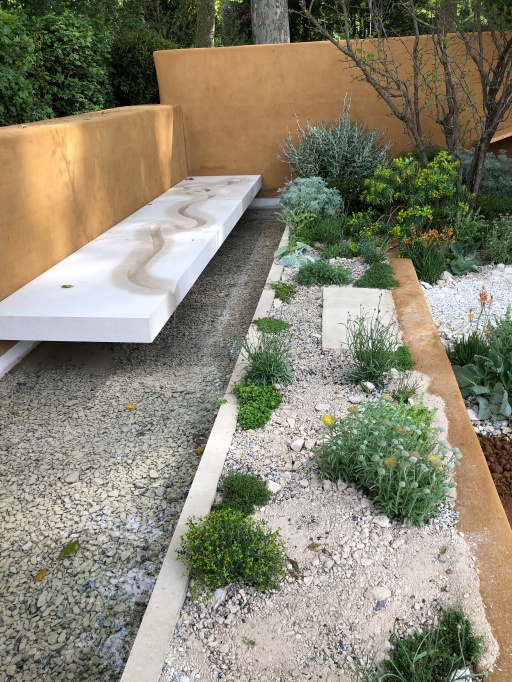 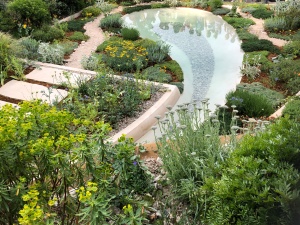 We sit and chat to the designer in his ‘majlis’; and admire many of his wild plants from arid countries, including wild carrot, euphorbia, various grasses and herbs. And the ubiquitous geum which has to be the most popular plant in the whole of Chelsea. These are a vivid burnt orange, though the orange below is the wild carrot. 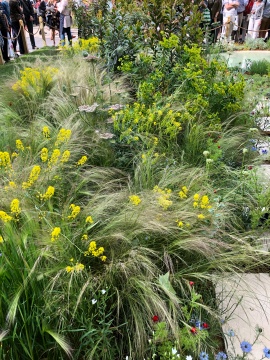 We glance at the notorious Duchess of Cambridge’s RHS garden but the queues are snaking right round the block, enjoy Tom Stuart-Smith’s luscious planting of all our favourite garden plants, including many that I have in London, like astilbe, cornus kousa (dogwood to you and me) and moisture-lovers such as irises, and a plant I inherited from my ma (centre, pink spears). 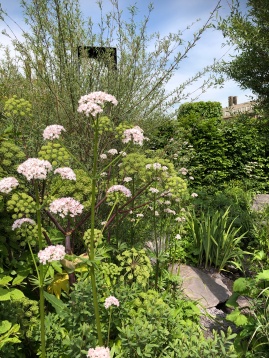 Inside the Pavilion we are bowled over by Jane’s florist friend Gail Smith’s astonishingly opulent arrangement of a living herbarium (below), built in honour of her estranged grandfather who was an amateur botanist in 1920s Cardiff. 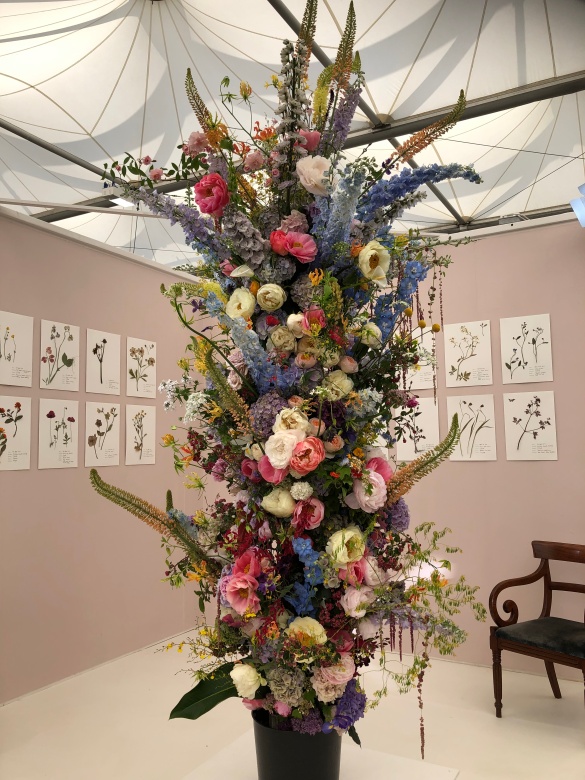 Here we also see several best-in-show displays and are intrigued by artist/designer Tom Dixon’s IKEA installation, entitled Gardening will save the world, an exploration of hydroponics for food to encourage us to grow-your-own. I, of course, need no encouragement! 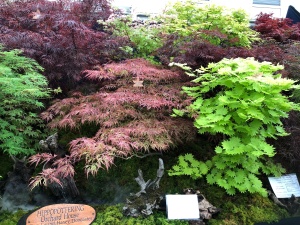 He likes his acers!

The artisan gardens are always worth a visit and we wander around but, again, it is impossible to see properly and we miss the prize-winning Camfed Garden, Giving girls in Africa a space to grow, a recreation of a garden in Zimbabwe containing nutritious crops such as beans, papaya, banana, sweet potato, groundnuts and sorghum; a project close to my heart as educating women is the answer for a better life in poverty-stricken countries affected by climate change. So, fed up with not being able to see, we find a space, The Hill, where we meet Scottish textile designer Laura Slater who has collaborated with a botanical design studio to create The Plant Room, a multi-sensory exhibit combining natural scents, textiles and plants (below). Heavenly. 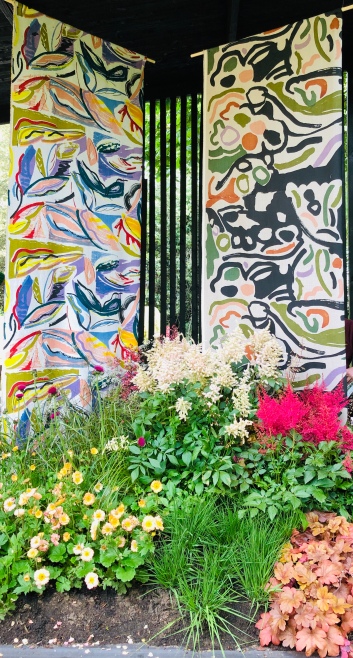 Exhausted by four hours of neck-craning, we call it a day. It has been wonderful but tiring.

Another view of the fabulous Morgan Stanley garden

In the evening, I have another social calendar highlight, a visit to Buckingham Palace to support HRH The Duchess of Kent’s charity, Future Talent, which supports gifted young musicians to achieve their ambitions. The Duchess was the Patron of the Angelus Foundation, founded by Maryon Stewart when her daughter died, whom I joined in the battle to raise awareness of club drugs and legal highs. For this outing we are reunited with Mitch and Jane Winehouse, as Amy died shortly after Louise. We are entertained to a virtuoso concert by these young musicians in the private areas of the Palace not often visited by the public. Quite magical.  It was a fitting end to a great day. 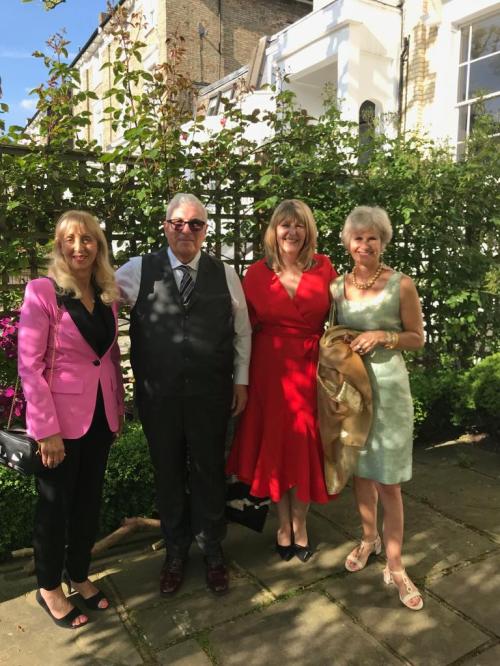 Standing in my garden, ready to go to the Palace (l-r Maryon, Mitch, Jane and self)