The grandest of the Saadian tombs

We are celebrating Ross’s second retirement. He said he wanted a rite of passage to get him out of pharma mode and back into real life. So here we are! On advice, we have decided that five nights downtown in a hot, noisy Riad is probably too much so we are staying in the Palmeraie district in a lovely place, Les Deux Tours, set in luscious gardens complete with vegetables, goats, hammam, large pool, hidden 4-poster beds for a post-prandial nap, and immaculate service. Our room lies behind a Mediterranean blue door and has its own secret garden. Spoiling indeed. 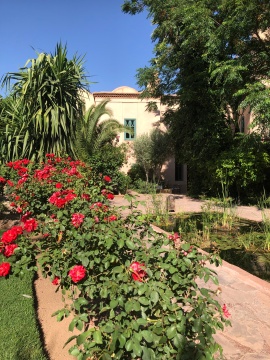 the gardens looking towards the main building

One of the many ponds

Cocktail hour!
We arrive in a massive hailstorm and driving tropical rain – not what we are expecting. The following morning is a little cloudy, which is a relief as the temperature will rise to 36C by the time we leave. We decide to break the back of the sightseeing on the first day. No visit is complete unless you go to the massive Jema al Fna, or main square. In the daytime it’s rather a tawdry place with a few snake charmers trying to wreath cobras round unsuspecting tourist necks. At night it throbs with drums, singing, acts, vendors – all in a frenzy of commercialism. En route we walk through the impressive Koutoubia gardens, admiring the tower as we go. 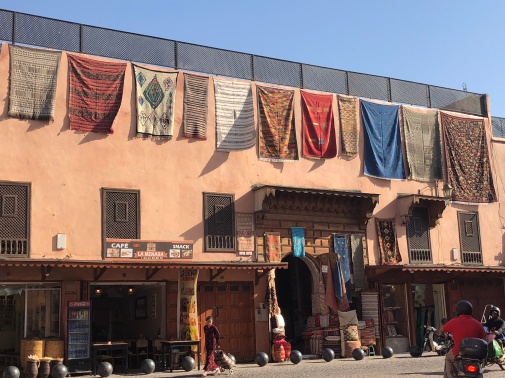 Carpets hung up for sale 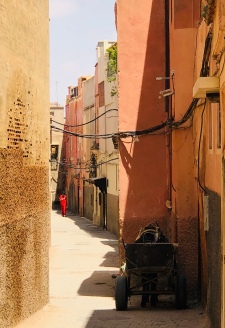 ON the edge of the Jemma al Fna

The Koutoubia, boys are posers aren’t they?
Then through the covered souks, with tiny thoroughfares which pose no deterrent to motos and cycles. Somehow people remain unharmed as do the resident cats, who are well cared for, fed and watered, loved and tame. This is something I notice all over Marrakech – cats everywhere, and nary a dog in sight. 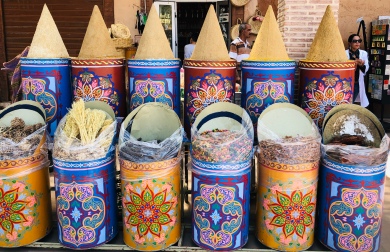 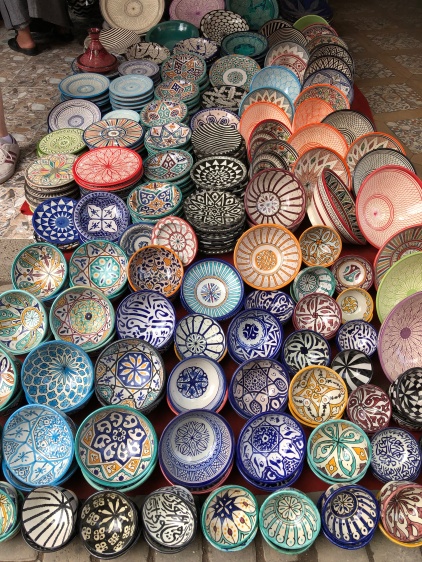 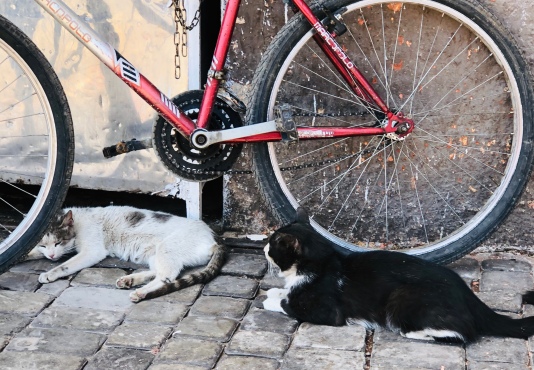 Waiting outside the butcher’s 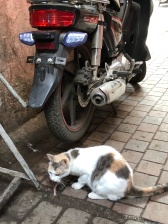 Pastries
On to the Marrakesh Museum, a 19-century home to a former foreign minister, now a highly decorated showcase with magnificent vaulted ceilings, majolica tiles, and of the best-appointed public loos I have been been to! 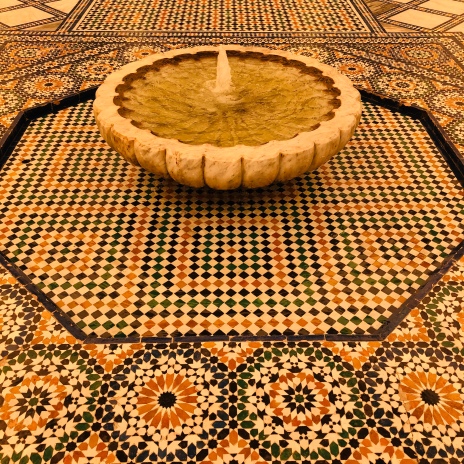 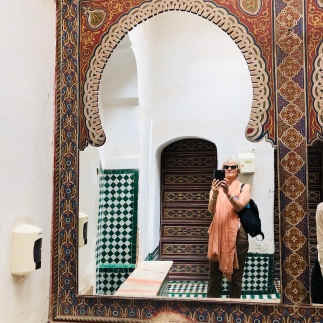 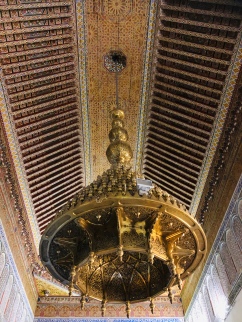 Ornate vaulted ceiling with brass lamp
So far so good, we say to ourselves. We have only met with kind, helpful people as Ross pores over his map and we hesitate on which direction to take. Warning of touts and guides seem far off the mark. This all changes after lunch when we decide to head off towards the tanneries. We are stopped by a friendly fellow, a Berber Liverpool supporter  – Salah represents the hopes of all young North Africans  – who tells us today is great day, the last day of a big festival and it will end by 3.30. ‘Here is my friend he is going and will show you’ – all in French of course. We were going that way anyway, but nevertheless we trot along behind him, hoping to see a fabulous spectacle. 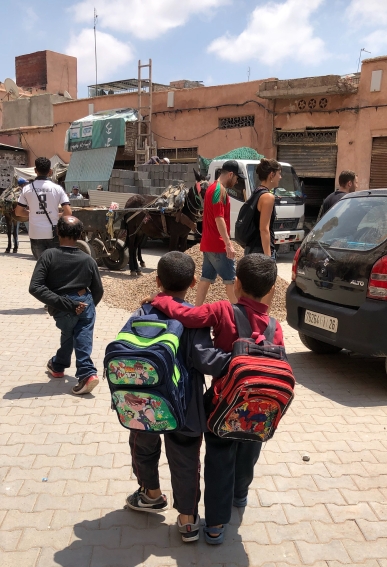 On the way to the tanneries

Instead we are palmed off to a sleezy bloke in a dirty black nylon tracksuit who presses a bunch of mint into our hands. ‘Berber gas mask’ he says, as he leads us into a vast area of curing tanks. Everywhere there are fleeces in varying states of decay, and the putrefying stench of  blood. It is stinking hot and I am gagging, pressing the mint right up my nostrils. But now there is no escape as our new friend pushes us this way and hither…and finally to a shop (of course) where we buy nothing. He then demands the equivalent of 20 Euros, and is backed up a nearby man…it is all we can do to escape minus a measly 5 Euros! 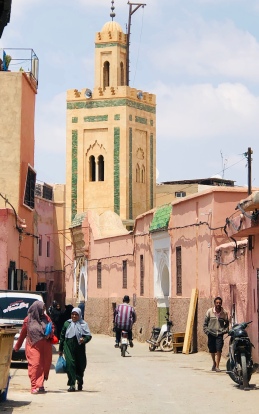 In our haste we get totally lost and almost fall prey again to over-zealous helpers…time to beat a retreat to the Majorelle Gardens, former home to Yves St Laurent and a real Dar es Salaam – haven of peace, despite the hundreds of tourists. The elegant bamboo groves remind us of Kyoto, spreading a cool dappled light on the path. The Berber museum is worth a visit too, the jewellery quite spectacular. By the time we get home we have covered 12 kms! 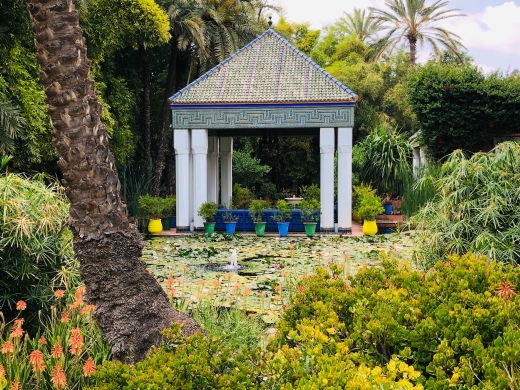 Majorelle gardens
The following day we are armed with mapme, thanks to some helpful advice from a local resident. We can do our sightseeing and say quite correctly, ‘we know where we are going’. The 16th-century Saadian tombs are impressive – stone-coloured intricate stucco-work and impressive tiles, as is the Bahia Palace, home to a  19th-century grand vizier which was ransacked and  looted after his fall from grace. Now beautifully restored, it is another splendid building with a massive tiled courtyard, albeit mobbed by visitors.

Mosque that guards the Tombs 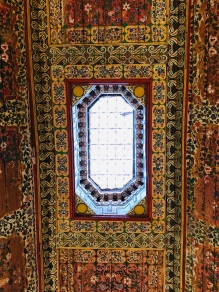 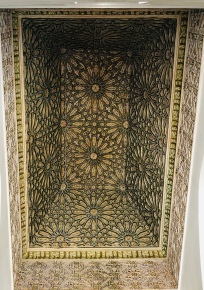 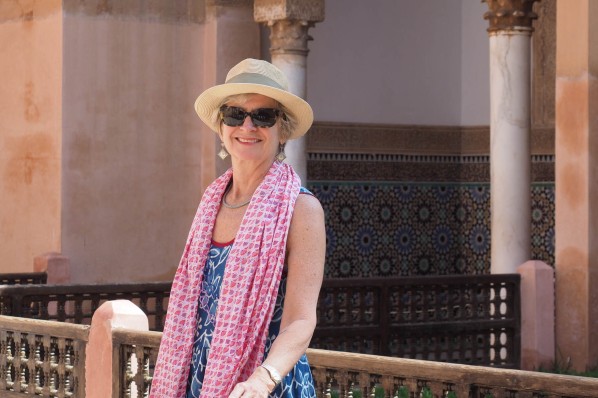 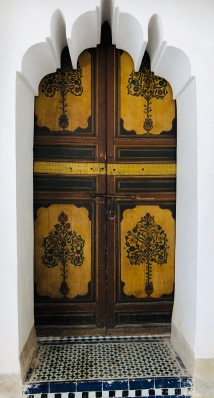 Much less busy but no less interesting is the last remaining synagogue in the Mellah, or Jewish quarter, where the houses are meant to be taller and streets narrower; the cemetery is massive, and dates from the early 17th century; of all the Jewish cemeteries I have visited recently it stands out because no-one has died from pogroms or persecution. It is a peaceful place.

The tall narrow street of the Mellah

Unlike the streets which are a buzzing inferno…stick to the right we have been told, but it still doesn’t prevent some near-misses. Some of the gateways are so narrow it seems impossible for cars to pass, but they squeeze through somehow. This is compounded by the King being in town, beefed-up security, flags on every gatepost and his palace opposite the turn-off to our hotel, so there are police everywhere. 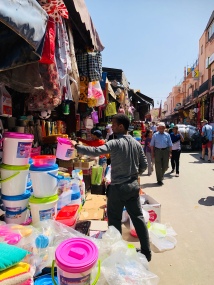 You can buy everything here

Transporting a couple of pamls into the MEdina by donkey & mule! 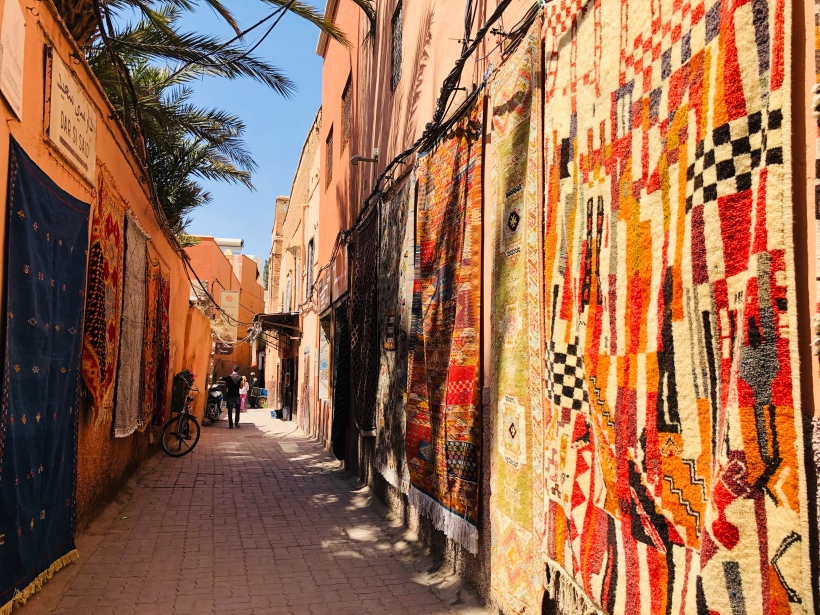 Most people are friendly and half-heartedly pester you, apart from one stall-holder who had begun helpfully, by advising that the Badia Palace was shut, but suddenly turned nasty when I wouldn’t buy anything. ‘Fuck French’; I am not French, I counter, I am English. ‘Fuck English’. It was probably not wise to have told him I was Jewish when he tried to direct me to a long-extinct synagogue.

Ross is lost and get some help
The good guy vs the bad guy – guess which is which?

Each day after a bit of sightseeing we repair to our hotel to swim and relax; sometimes we venture out again for dinner in recommended Riads, but the food in Marrakech is disappointing. There’s only so much couscous and tagine a girl can eat (although it’s always good); but when we venture into more international territory it is disappointing. 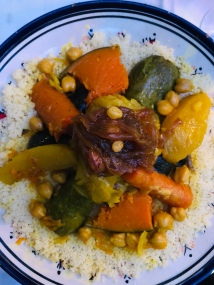 Dinner at the Riad Mansour 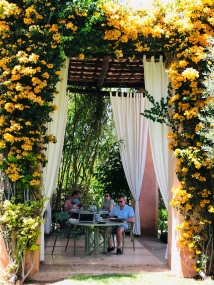 Hotel pool before the rush…

Hotel cat
Even our lovely hotel scores a big fail on their Thai menus; the Riad El Fenn’s menu is just bizarre and they can’t tell the difference between fish and chicken: turbot on a Marrakech menu – whatever next? Mind you when it was put in front of me instead of the chicken I ate it and it was surprisingly tasty. Lunches are usually fairly safe with an assortment of Moroccan salads a safe bet, normally they are part of a set menu, popular with tourist places. The Café Badia is the best value in town and delicious, with great views of the nesting storks on the old palace walls. 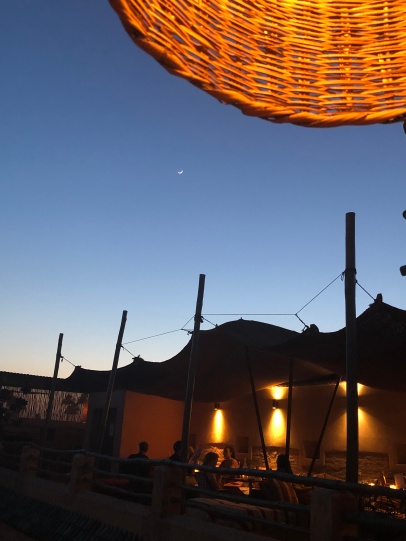 The Ramdan moon rises over the Riad el Fenn

Nesting storks, lots of chicks…
It is the beginning of Ramadan. We decide that terrible service and some surliness can be attributed to this. It is very hard in 30 plus degrees to fast: I saw a woman faint in the street. It is also annoyingly the reason why several places we tried to go to remained resolutely closed despite information to the contrary. Frustrating, but a good excuse to go and have a couple of extortionate cocktails at the elegant Mamounia, with its gardens (not a patch on the Majorelle though). 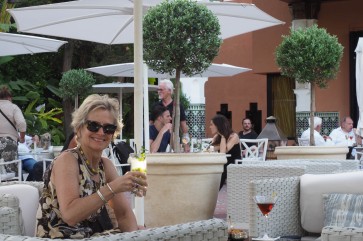 Rioting to get the best titbits in town – by the bucket-load! 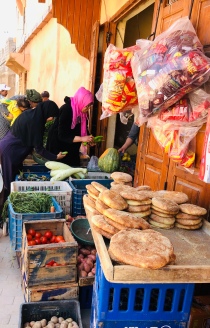 Queuing up for Ramadan sweetmeats
Above:Hot and tired at the Mamounia – it was 34 C; nothing like a mojito to sort that out! Below: Ramadan preparations!

So we spend a very pleasant time in Marrakech; the days are a mixture of frenetic sightseeing, a bit of argan oil shopping, even meeting some old friends,  and chilling in the gardens of the hotel, surrounded by the pleasantly cloying scent of jacaranda, mixed with jasmine and rose; an occasional peacock drops in, the hotel cats wind round my legs; turtles and frogs plop in the ponds and croak like banshees at night. A hammam sloughs off all the winter skin and we feel refreshed and glowing. A great place for a mini break!

A billy goat in the garden

Turtles and frogs in the pond 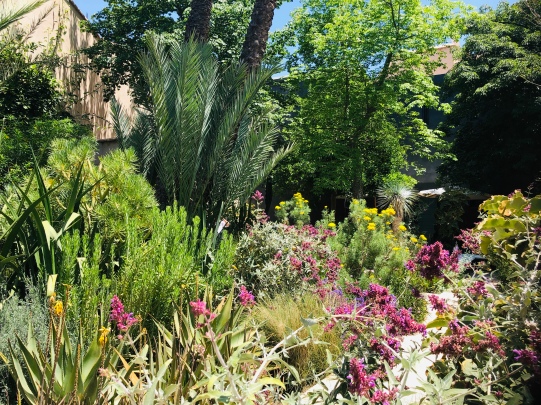 Le Jardin Secret in the Medina 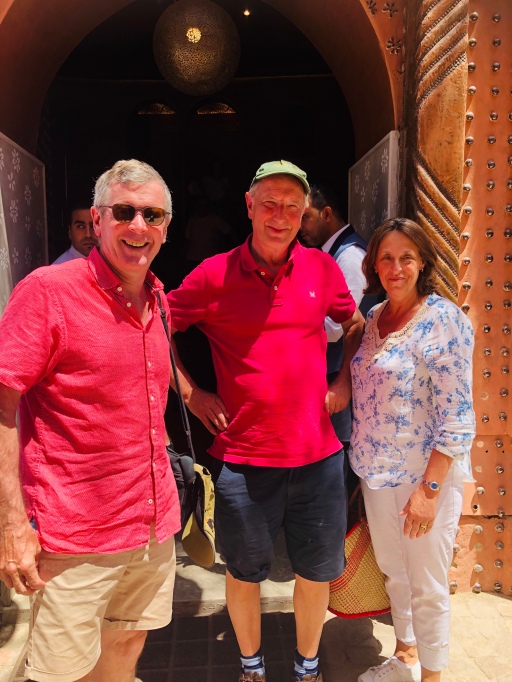 Look who flew in?

the lovely gardens at the hotel

The best time of the day 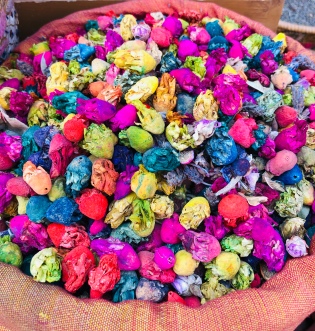 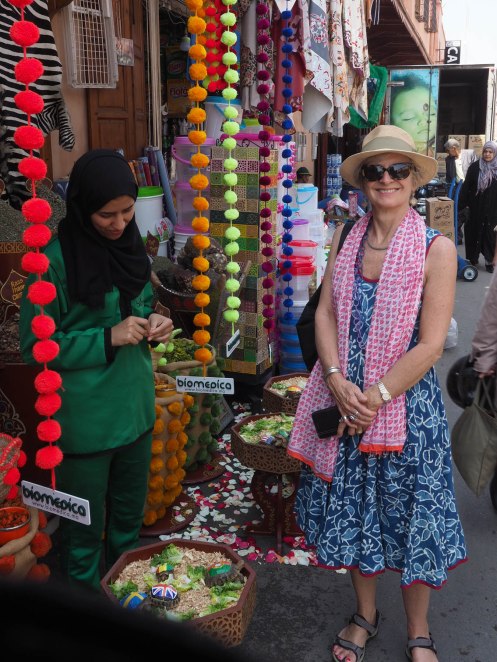 2 thoughts on “Five days in Marrakech”