The shady market scene in one of the backstreet hutongs

It’s the anniversary of Dad’s death two years ago,  and I need to do something positive to take my mind of all the losses of recent years.

So I decide to branch out and see some of Beijing on my own: the hutongs beckon. Hutongs are the very core of the city, vibrant and thriving communities, which date back to Mongol times. In the 1950s there were as many of 6000 of these streets crisscrossing the city – all east to west for good feng shui – but the bulldozers moved in and razed many to the ground in the name of progress. Now around 2000 remain, and the government seems to have realised that they are good tourist attractions and can feed their coffers with tax; the destruction seems to be on hold. 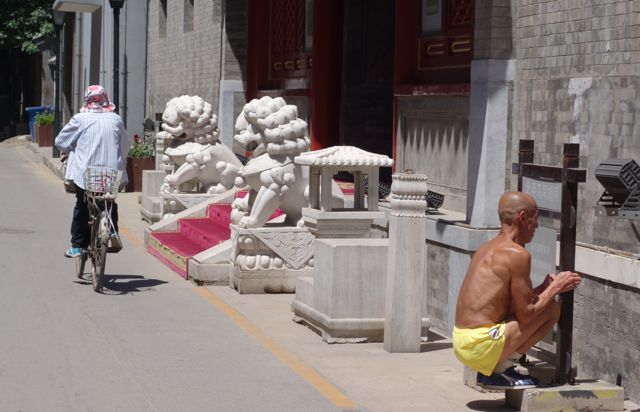 the sights you see – man exercising on outdoor gym outside a temple; lady on bike

When in doubt, play The Lonely Planet trick and follow one of their walking routes. So I find myself at the beginning of the very touristy Nanguolu Xiang hutong, but immediately take a right as my journey will traverse the main thoroughfare, although it looks attractive with shady trees and cafes. My walk is 2kms and the objectives are the Drum and Bell Towers, two fine Qing dynasty buildings dating from about 1400. 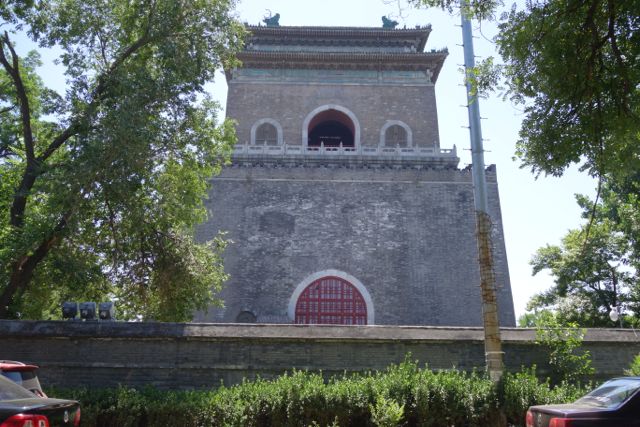 My first encounter is with a sewage truck emptying a malodorous drain; it serves as reminder not to eat street food in China following the oil-from-sewer scandal, which has led to many deaths. The route meanders down alleys and unmarked roads, lined with roses in full bloom. I peek into courtyards with caged birds singing away; am assailed by a Pekinese-style hound having its haircut; mown down by rickshaws and the silent, electric scooters so popular here; shooed away by people who don’t want to be photographed. But I am the only lǎo wài here! 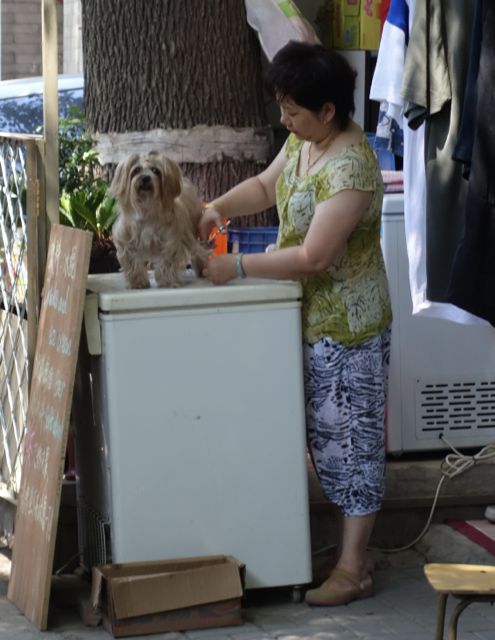 This pesky creature having a haircut really went for me! 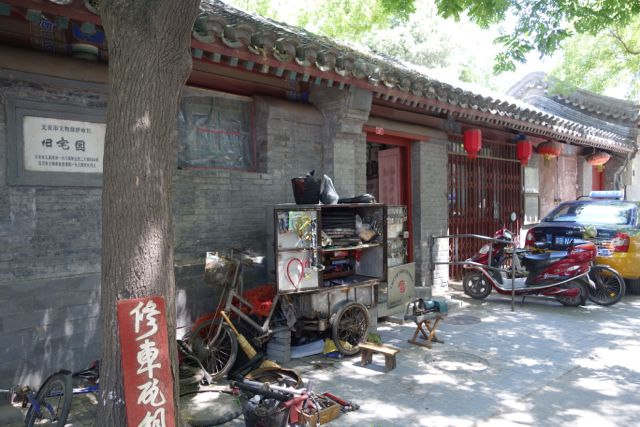 The house where the Last Emperor’s (Puyi) wife lived before her marriage – not much to write home about now, and I was shoo-d away by an irate bare-chested man!

Down these little streets life seems to have stood still: little old ladies sit and chat, or play mah jong in the shade; there are markets heaving with fresh vegetables, piles of cherries and watermelons; there are trucks loaded with re-cycling and cars parked higgledy-piggledy, hub caps protected with strange cardboard squares. Men drive around on trishaws advertising their wares on loudspeakers; the small shops are selling a local yoghurt drink which looks good – but no dairy for me. Nearer the main drag there are restaurants and bars, and even The Giant Leap Brewery, the brain-child of a keen American, finds a home in the back streets. 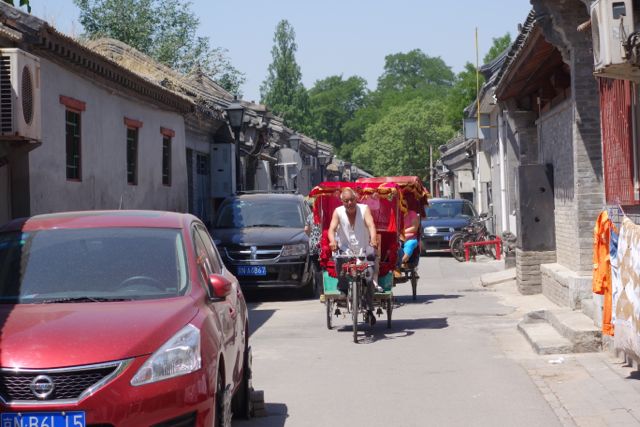 Typical street scene – looks hot doesn’t it? It was baking!

But most of all there are Public Toilets, signposted every 50 yards or so. The penny drops – there is no sanitation in the more traditional houses, though since these properties have become so valuable, several have had luxury makeovers. The loos are also an attempt by the government to stop people peeing anywhere: it starts young, this habit: Chinese babies have trousers with a big hole for the bottom; as they don’t wear nappies, the bum is bared whenever they wish to wee or worse, wherever they are!

I finally wend my weary way to the two towers, and stagger upstairs to the balcony of the Drum and Bell bar and try to cool down a bit, with a cup of scalding oolong. I later discover the temperature was 42C – a record for May.

Great view of the Drum Tower  from my  cool balcony

Despite the heat, I am on a roll now, so I decide to go to the Lama Temple, Beijing’s foremost religious centre, a more recent edifice, dating only from the 1700s. Contrary to rumour, I find no difficulty in getting a cab and arrive at 1pm. The searing heat means there are relatively few people there, and I am able to scramble around the several halls unimpeded. I light a few incense sticks and offer them in the Buddhist way, while I make a few wishes and remember our darling Louise.

Offering incense at the Lama temple

As I leave in search of sustenance, the coachloads arrive!

Still feeling brave I search out a recommended noodle bar, but it’s gone. So this is how I end up in the only other restaurant I can find in this rather chi-chi hutong area, which is full of Buddhist paraphernalia and shops blaring Om Mane Padmi Hum in a monotone. The Veggie Table is Beijing’s only vegan restaurant and very trendy with deep sofas and comfy cushions. Bliss! Seems very strange to be tucking into home-made falafel and hummus, washed down by cucumber, lime and ginger juice. All too cooling in truth, but I am soooo hot, I think cool Yang is required!

After five days in Beijing, though, I have not had a decent meal (husband has had to work so late we end up eating in the ghastly Marriot three nights in a row) and I am on the rampage for Peking Duck; ok, I know its forbidden, but it’s got to be done. On the last night, doubling as a farewell party to one of Ross’s colleagues, we go to the ultra trendy Beijing Dadong Roast Duck restaurant; renowned for having the leanest and crispiest bird in town. 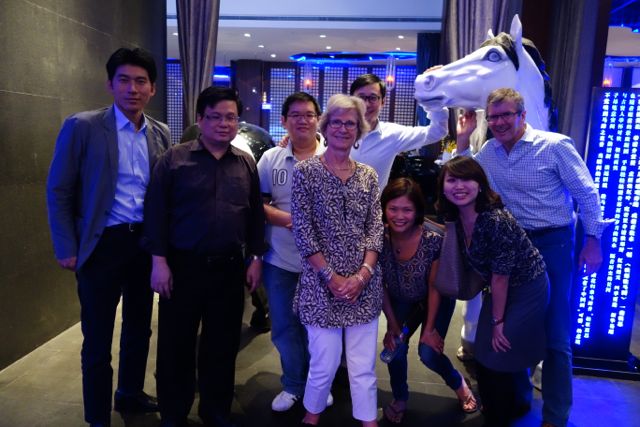 The team posing at Dadong Duck after our lovely meal – wild horses and all that! (l-r Nori, Chong, Hanway, self, Gao Fan, Ping, Kenny and Ross

So while I didn’t get to the 798 Art District – ran out of time and energy on the last morning – I think I saw an awful lot of this city in just a few days. I will be back as there’s till so much to do…

2 thoughts on “Solo sightseeing: the hutongs of Beijing in 42 C”