Nicaragua and Costa Rica: our holiday destinations this autumn. Central America is terra incognita for us. Luckily we have cousin Christine and her Chilean husband Diego as our tour guides, who are both Spanish-speakers; Tim and Annie, also from Champery, make up the six. On arrival we are greeted by the electric trees (cost $25k) which line the main road from the airport  in preparation for the Pan-American Games next year. And a huge portrait of Hugo Chavez! 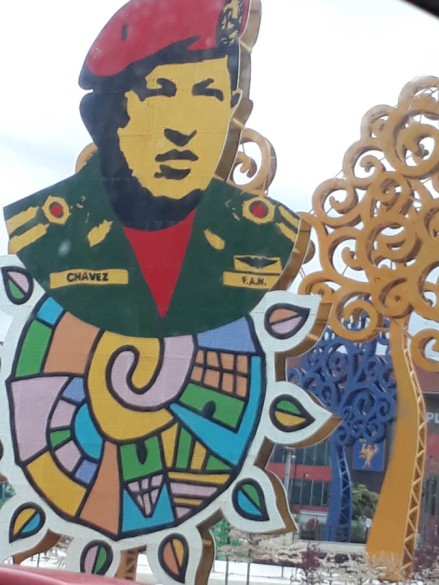 Nicaragua is South America’s  2nd poorest country, with no natural resources and ravaged for decades by war. Conquered by the Spanish and then raided by a series of bounty hunters including Henry Morgan, the Jamaican pirate, and American serial arsonist William Walker who burned the city of Granada to the ground, it was more recently plagued by the civil war between the Contra/US forces and the Sandinistas led by Daniel Ortega, who is now back in power, albeit with a more capitalist-leaning liberal economic outlook. It is still considered dangerous by many tour groups but in fact we find it one of the friendliest and safest countries we have visited. 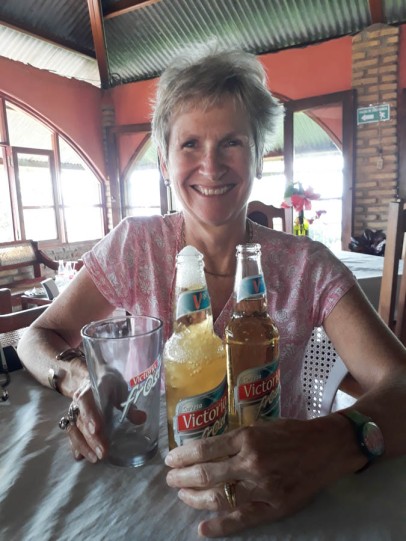 Ross with Diego and Christine 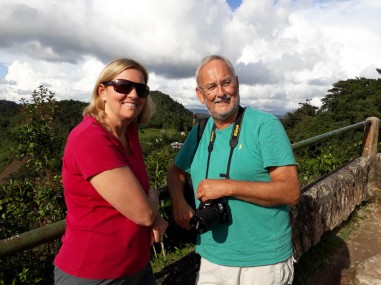 The drive up to our first stop Reserva El Jaguar brings this home. The road is lined with shacks, dogs, cows, horses, people, roadside industries selling a range of products from garish flamingos and religious statues to utilitarian blue petrol barrels converted into BBQs and bird cages. It is washing day and laundry festoons the bushes and any spare line. Somehow people emerge spotless from their dank and dingy homes. Buses are overflowing, the roads are busy, not so much with private cars but motorbikes and lorries. A long hold-up takes us past an accident where there is a bloodstained body lying under a blue tarpaulin. A crowd of people are gawping, motorists rubbernecking. It is a chilling reminder of the fragility of life.

On the way to El Jaguar

Bayardo, our driver, doesn’t seem to know where we are headed, so remote is El Jaguar, so we stop at Jinotega to ask. It is Sunday and everyone is out, playing in the garishly painted park – yellow, pink, lilac and blue, colours we find in all public spaces. The local university has good Sandinista murals of gun-toting students.

Girls just want to have fun 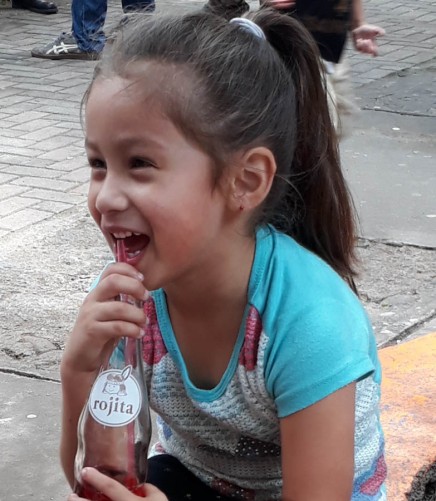 The countryside is beautiful, rolling volcanic hills verdant at the end of the rainy season. We leave the main road for a rutted and stony track, snaking through fields of cabbages and corn and, as we climb, through smallholder coffee farms. The rain starts and the cloud comes down. Finally we reach El Jaguar, a protected reserve, coffee farm and bird-watchers paradise.

Dawn in the cloud forest 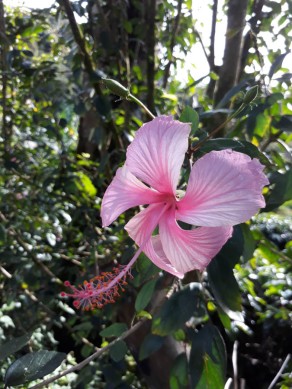 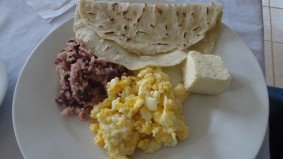 It feels like the middle of nowhere, with a few damp little cabins for visitors, containing as much insect life inside as out. The sheets are damp and the hot water sparse. It is chilly up here at altitude too. The ‘dining room’ is open-walled but the food is good, and a bottle of Flor de Cana rum goes down quick, especially during the furious Skip-Bo competition that begins – girls trouncing boys (as I write the score is 8-3 to us!).

A gap in the roots of the ficus tree

Open-sided dining room – see how we are bundled up! NB rum on end of table! 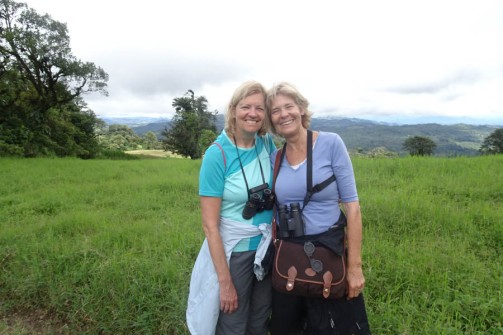 The next morning we rise early to watch the humming birds feeding. After a night of rain battering on the roof and rodent-scrabbling to add to our sleepless night, we are happy to see a hazy sun emerge through the mizzle and fog. The birds are stunning – warblers, chacalacas, jays, crimson-collared tanagers, violet sabrewings, rufus-tailed humming birds, yellow-throated euphonia – all feeding on the sugar water and fruit that the staff puts out! 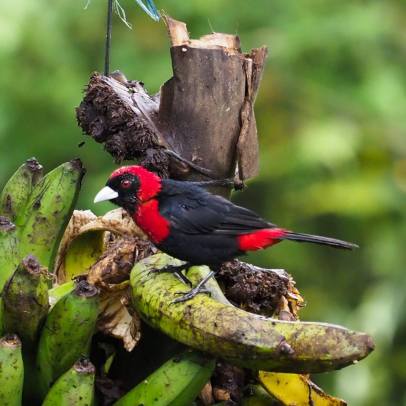 Our young guide Wilmer then takes us on a 3 hour 6 km walk round the coffee estate. Wellies are provided as it’s mostly ankle-deep in mud. It’s my first walk since the operation and luckily I have brought two walking sticks. We go slowly looking for birds but the canopy is too thick. Still it’s a pleasant ramble and occasionally we come out into the open and get a good view. The highlight is the resident sloth and later, his mate. I’ve always wanted to see a sloth. 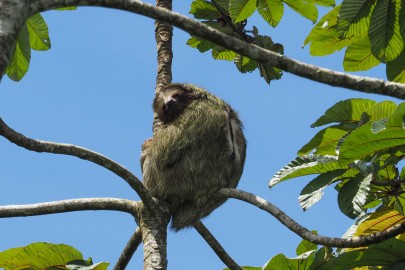 The lowlight is the next morning we find we are all covered in the worst mosquito bites we have ever had. Ross’s wrist is red and swollen, Tim’s elbows are on fire and even I, who never get bitten, have to apply the tiger balm. These bites are to last the whole trip!

After this rather disappointing introduction to Nicaraguan wildlife, our next date is much more satisfying. After visiting Leon and Granada (next blog), we head for Ometepe island, for 3 days R & R. Renowned for its twin volcanic peaks, the live Concepcion and the dormant Maderas, its slow pace, beauty spots and wildlife, it seems like a good spot. We stay at the quaint Xalli Beach Resort (if 6 rooms and a strip of black sand are a resort, so be it!). There are brightly- coloured hammocks slung in the garden and chickens pecking at one’s feet. The lake is calm and refreshing, giant egrets watch us as we swim, some fishermen launch their boat.

Annie and Christine in front of Concepcion

Posing in the lake

Our first activity sees us setting off for the Cascade de Ramon. We have been told we can drive the car up the first 2 kms so that it’s only a shortish slog to the top. Sadly this is not the case as our vehicle is not 4 x 4. So we set off up the track which is pretty and steady at first. The magpie jays are cackling around us, there is birdsong in the trees and the occasional cry of the howler monkeys. The others soon leave Ross and I behind as I am so slow but we find a huge male howler in the trees and enjoy looking at the Monarch and Blue Morpho butterflies as they flutter around us. 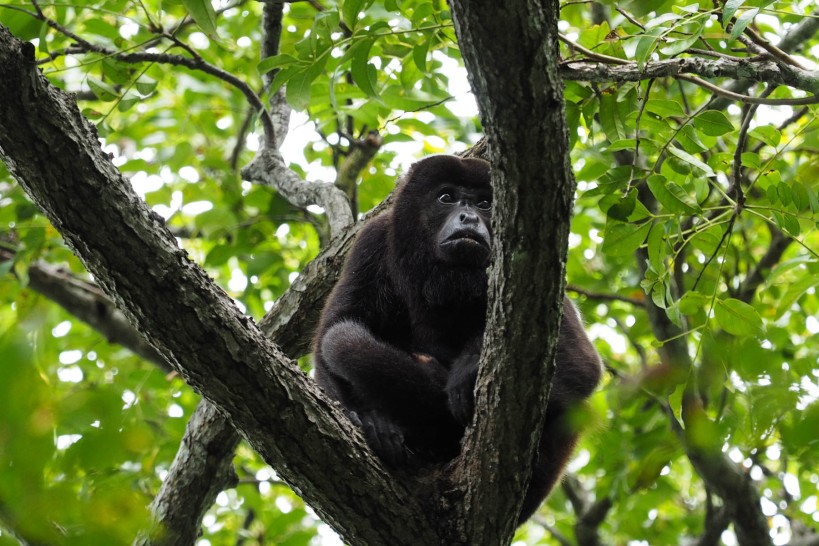 The going is very tough, especially after the 2 km mark where the track becomes very slippery, narrow and muddy. I press on but feel at the end of my puff and my legs are both hurting. I send Ross ahead and climb slowly onwards. He comes back saying the others are also defeated as the last bit is a scramble. We are all disappointed and stroll down disconsolate.

Maderas from the lake

As a result we miss our afternoon wetlands kayak around the isthmus of Istian. Ross and I are determined not to forego it altogether so we go the next afternoon and it is the highlight of our stay. We do it the lazy way, taken by motorboat to the edge of the wetlands, where we lower ourselves into our kayak. Our young guide, Alan, has good eyes, and soon spots a rare green iguana – in fact it’s the male and orange with a banded tail – a huge 1.5 m creature, lounge-lizzarding in a tree. 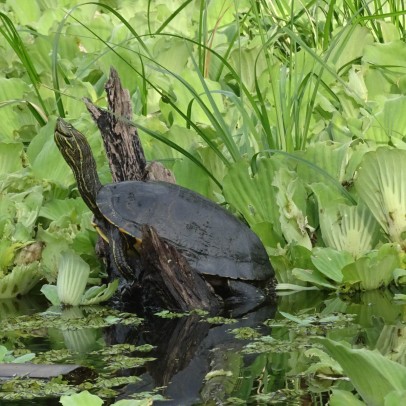 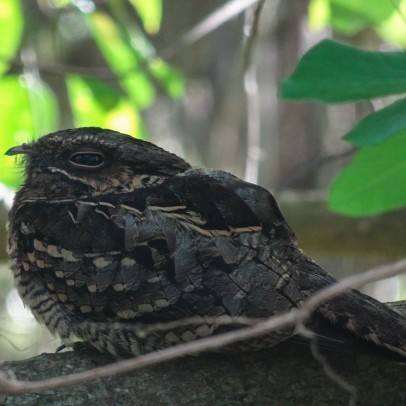 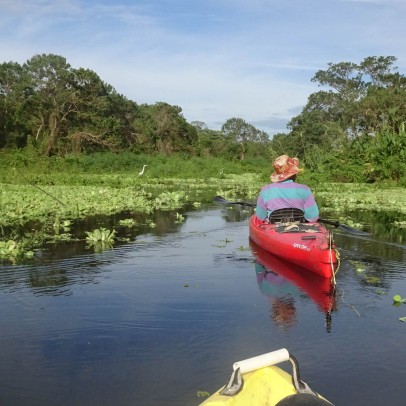 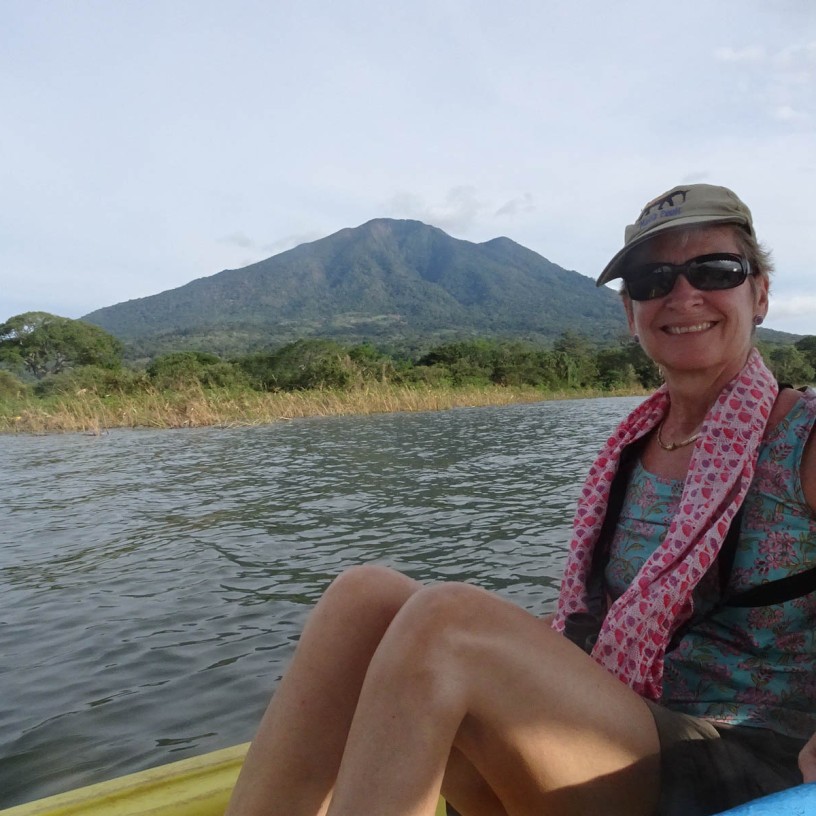 In front of the Maderas volcano

We paddle down egret alley, they stand sentinel every few meters, herons abound – green, night , tiger, three-colour – and we even see a baby in a nest. Cormorants dry their wings, keskidees flitter around, jacanas jump from lily pad to lily pad, a mother purple gallinule takes her chick for a walk. It’s utterly gorgeous, as we paddle through a sea of green, underneath the branches of trees. The sunset as we return is glorious over the lake. 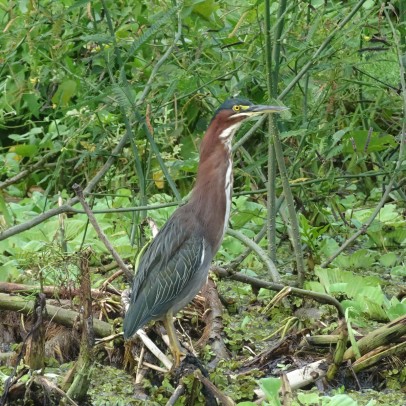 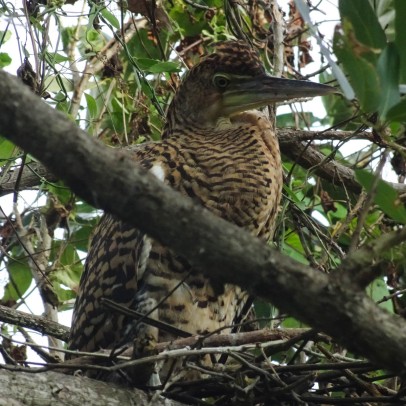 The other delight is the butterfly farm at Chaco Verde where we can see close-up all the fabulous creatures we have seen dancing around us.

NB all good birds and beasts photo credits to Ross, although some are also mine!

Moth emerging from its pupa 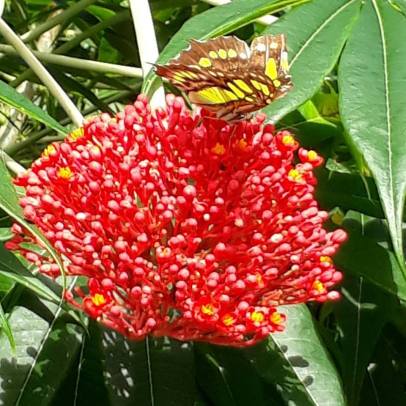 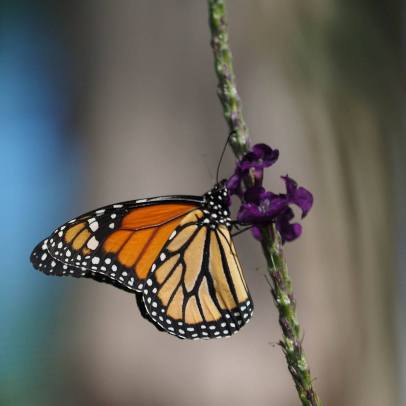 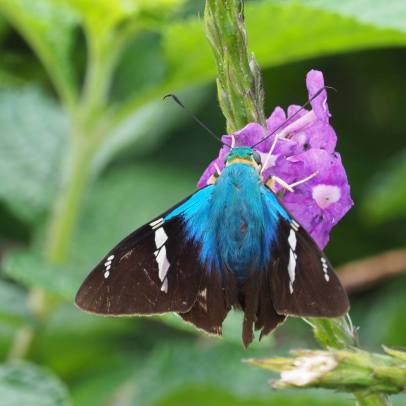 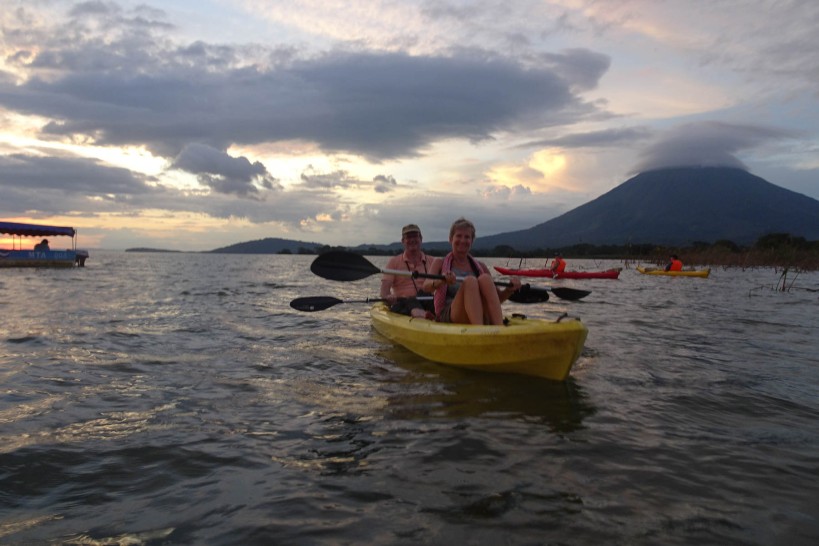 More sunset on the lake 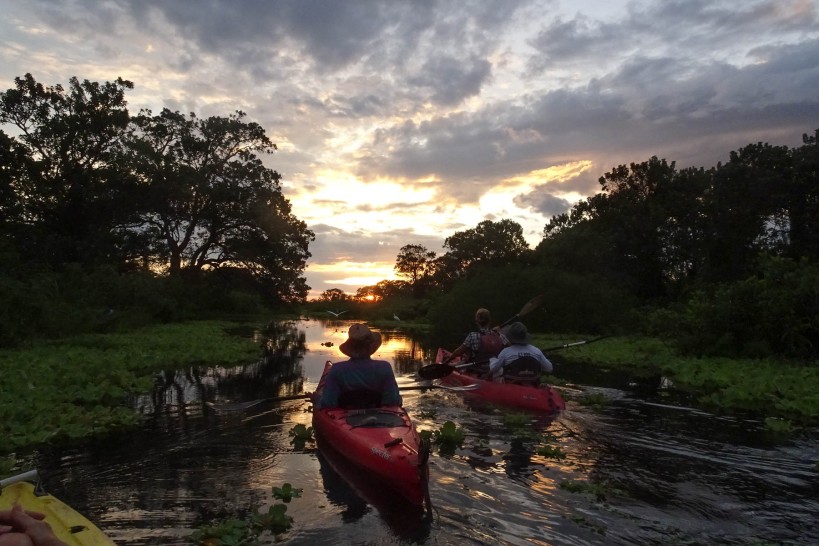 One thought on “Nine days in Nicaragua: Part 1 wildlife and wetlands”