Long Pool in the early morning

Back to Goliath Camp Mana Pools, Zimbabwe for the eighth time. As usual we take the whole camp with a group of friends, some of whom are new to Africa and to safaris. In addition to our host and incomparable guide, Stretch Ferreira, we are lucky to have Sean Hind, who is a brilliant birder. We have two objectives: find the leopard that has eluded us to date, and break our birding record of 115 species.

Stretch with his girls 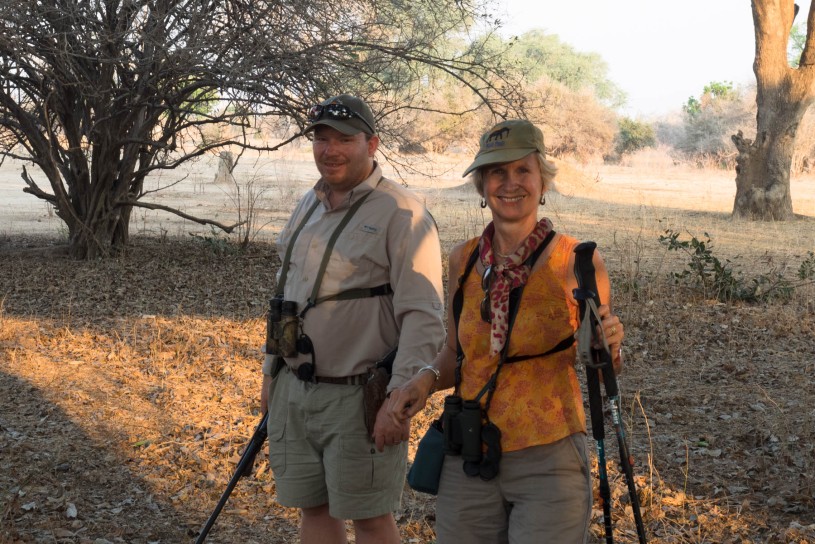 But all is not well in the park: Zambia is burning and the air is redolent with smoke and dust; 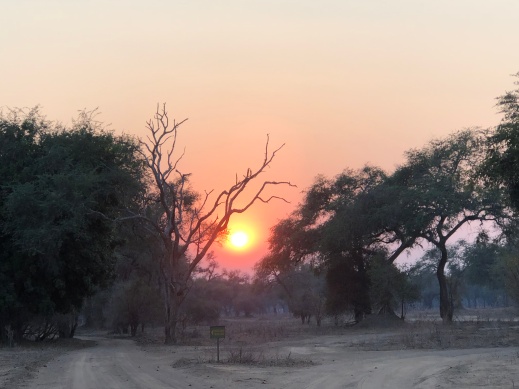 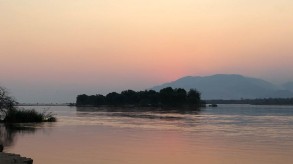 Sunset over the Zambezi 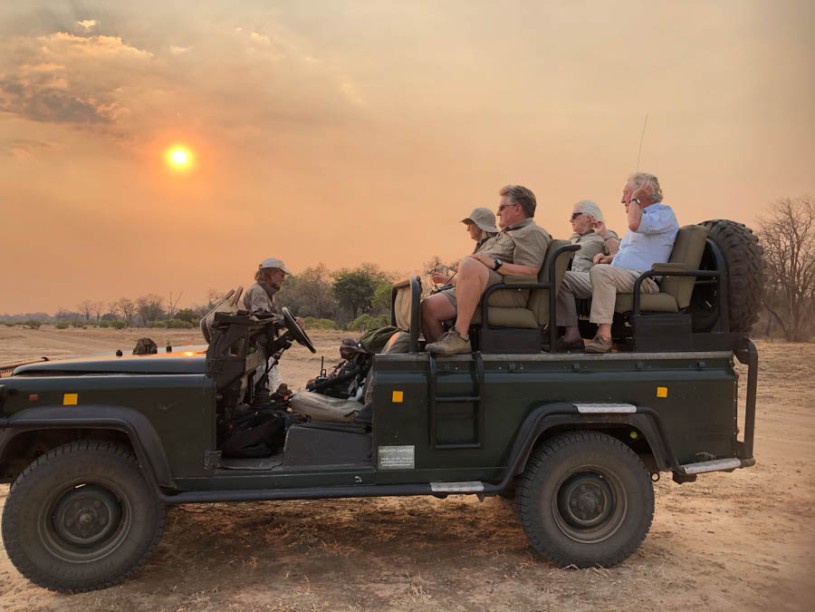 the river is high as repairs are being done on the Kariba and Kafue dams and vast amounts of water are being released, washing our swimming pool away and providing cover for huge crocodiles; but most noticeable of all is the increase in visitor number to our normally peaceful haven. This is partly due to several new concessions being granted: new semi-permanent camps have sprung up in our favourite waterholes and picnic sites, now rendering them inaccessible and, worst of all, the wilderness area, has been bought for big money and a permanent camp on stilts is being erected, with huge lorries delivering materials crashing through the jesse. This is in breach of its UNESCO status and is shocking. Where will it end? 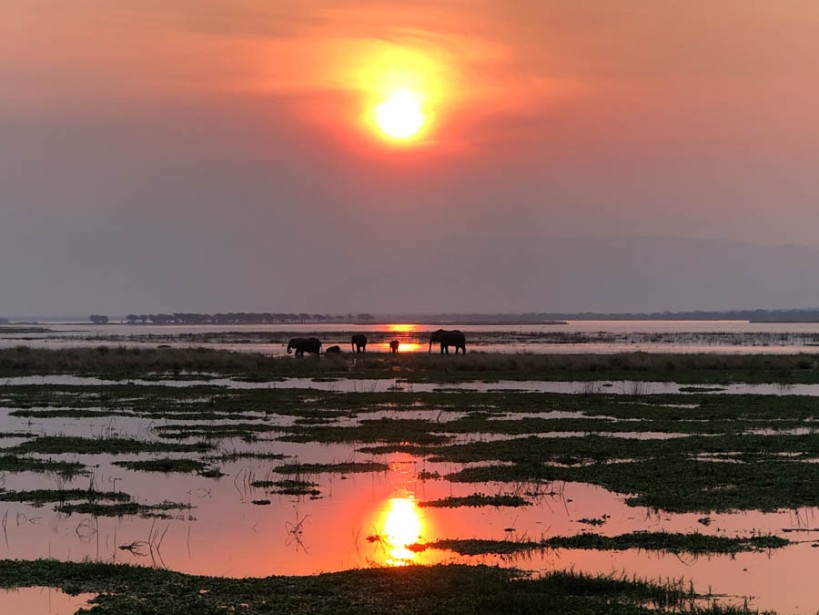 Sunset in the Wilderness area

Despite all we are lucky and break the leopard jinx on day 2 and see a beautiful young female posing in a tree; 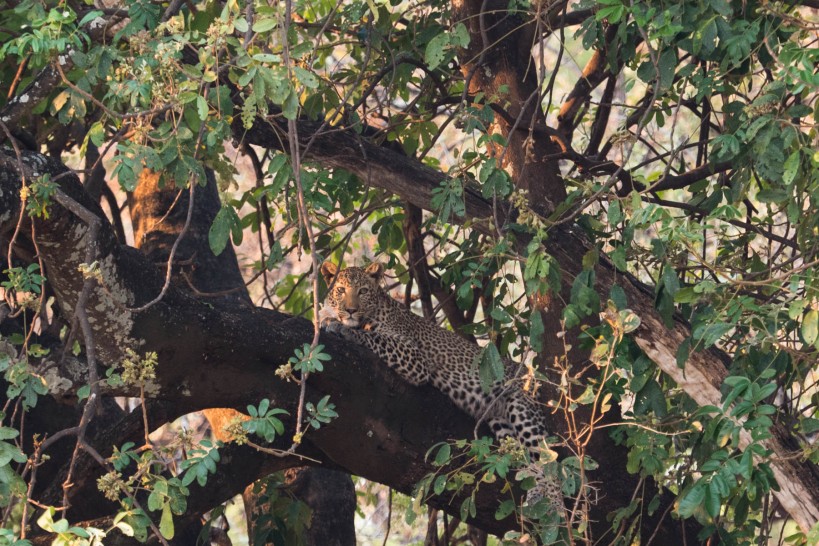 we almost run over the remnants of the wild dog pack, now reduced to four adults and four pups (the fifth was taken while we were there; the BBC film on this pack will be released soon, but one wonders what price fame with this pack’s number down from over 20); 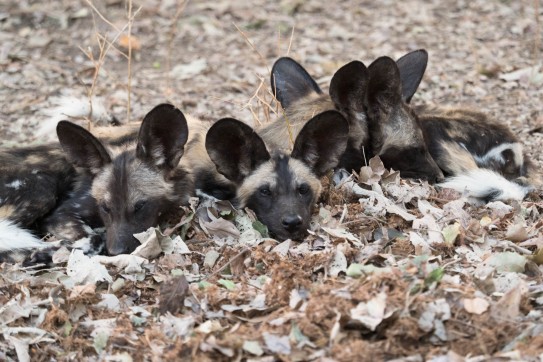 I know this isnt a dog but he is very fine!

and see a number of small groups of lions – again hugely reduced from the large prides of 15 plus that roamed during the Spice Girls era. Now we are down to a couple of males and two females and one of their young male cubs, and a pride with cubs we track in vain. The reduction in lion numbers is alarming, given the amount of prey available, especially in the dry season. We don’t find the young cheetah mother and cub who have moved in as a result of this. 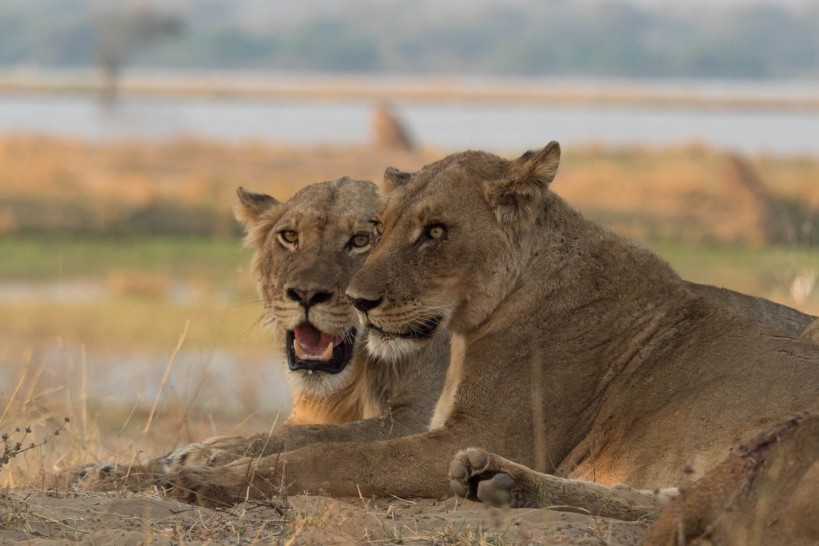 The last two remaining females from the Spice Girls pride

Elephants galore, as ever. We are lucky to find Boswell who obliges us with a fine display of feeding on his hind legs – a treat for the newbies; later we find a third elephant in the wilderness area who has learned this party trick, and we name him Gene Kelly. Stretch is thrilled as he had never seen this boy before. 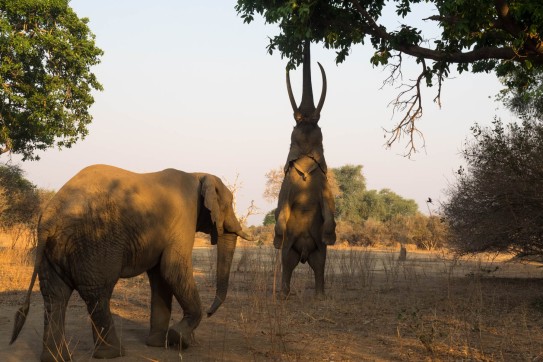 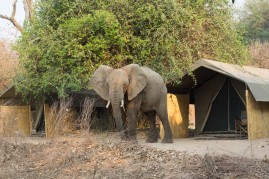 Chasing off the hyena

The elephant calves delight us in their antics – I saw one collapse in a heap from exhaustion and have a power nap. Like all babies they love to play, and are experimenting with their trunks, one young boy picking up the acacia pods and putting them on his head and running around in glee.

The Old JD having 40 winks

Mother and calf, this is the one that had a power nap 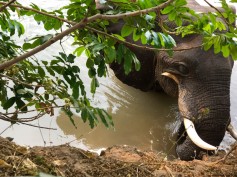 As a veteran of the park, my new obsession is birding, and team Sean, Cindy and Vicky break the camp record with 145 species in 6 days. We are thrilled to find the African skimmers after a stake-out at Long Pool is finally rewarded with glorious sightings of this endangered species in dawn light. 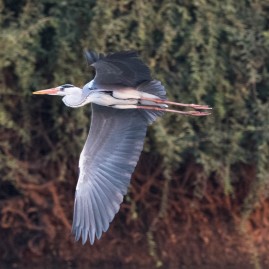 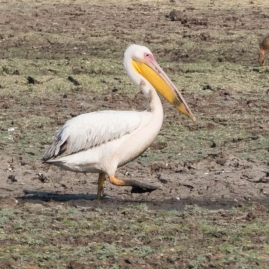 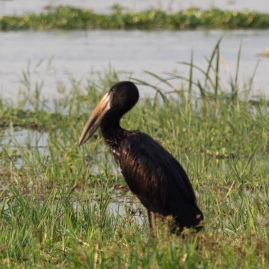 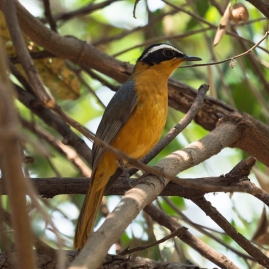 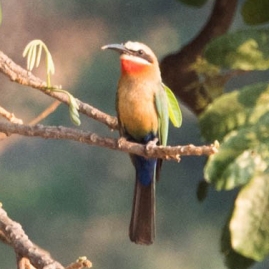 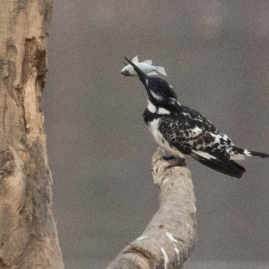 Pied kingfisher with a fish!

While we are there a woman is crushed to death by an elephant cow, in the National Parks office area. It is a reminder that, despite Mana being unique in allowing people to walk without a guide, these are wild animals, and nothing is more dangerous than a elephant cow, especially with calf in tow. We are told that at the same time the woman died, over 50  elephants fled the islands toward the main land, responding to the alarm calls from the beleaguered cow. They are extraordinary beasts. 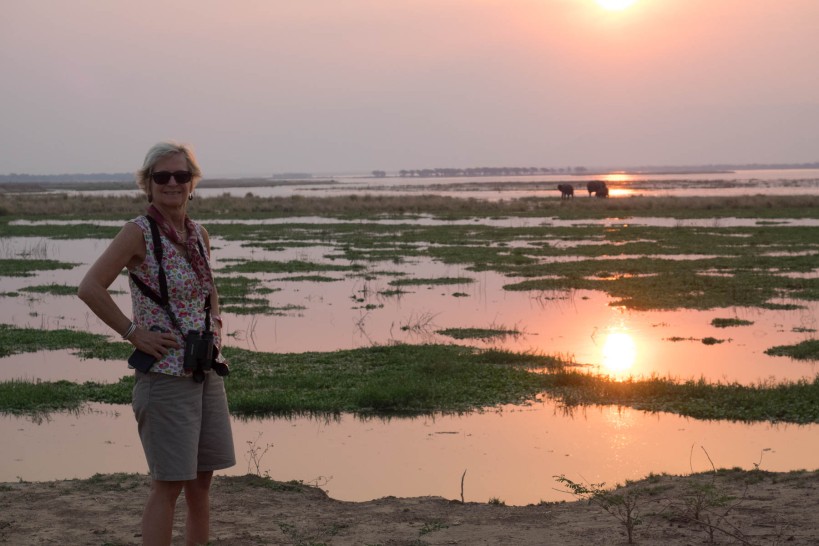 In the Wilderness area with my favourites

The days follow a familiar pattern – early start, game drive, toasted sandwiches for a late breakfast, lunch, rest and an afternoon drive. we all enjoy every minute despite the heat – over 40 C. I do quite a bit of walking although it’s hard going on the dried-out river beds. We even stalk lions in adrenaline grass. All in a day’s work in Mana.

Looking for the malachite kingfisher 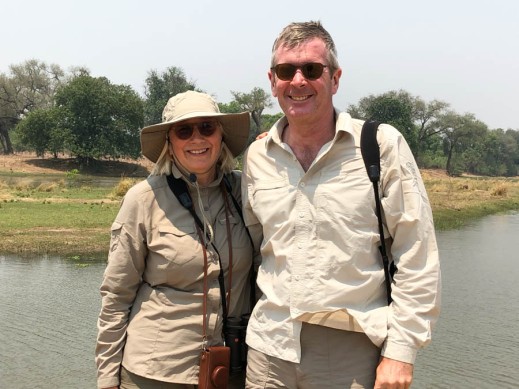 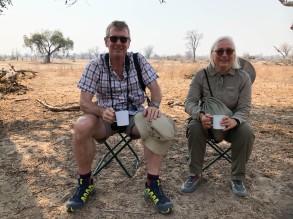 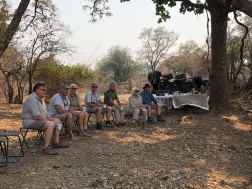 Cindy has an early Zambezi

in the dry river bed: Ross, Cindy, me, Jane 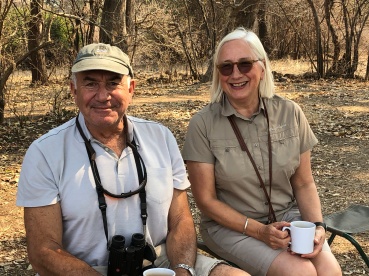 Stretch rises to the occasion for his guests: 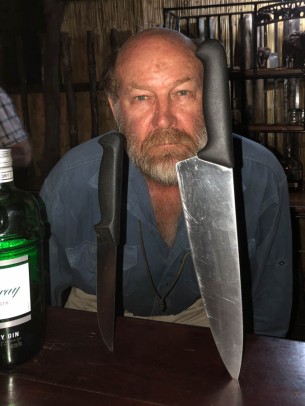 getting ready to braai

Mavis is waiting for us

Copious amounts of gin for sundowners!

Rueben and Megan making the G&Ts 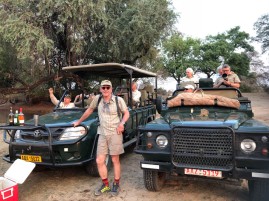 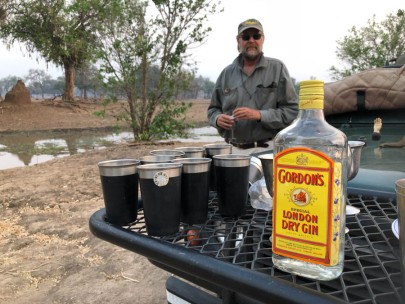 Waiting for the skimmers

Cindy even finds time to do yoga: 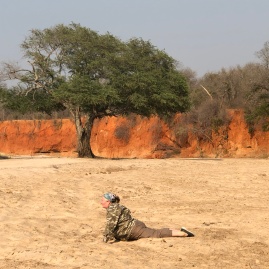 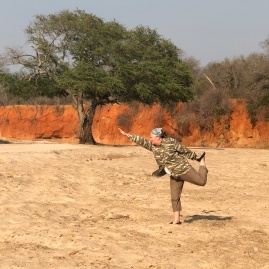 A few nights later, while having a final sundowner, we are astounded to hear three shots ring out in quick succession. The Anti-Poaching unit, unnerved perhaps by the recent death, has fired warning shots at some elephants. This is the price of people’s stupidity. 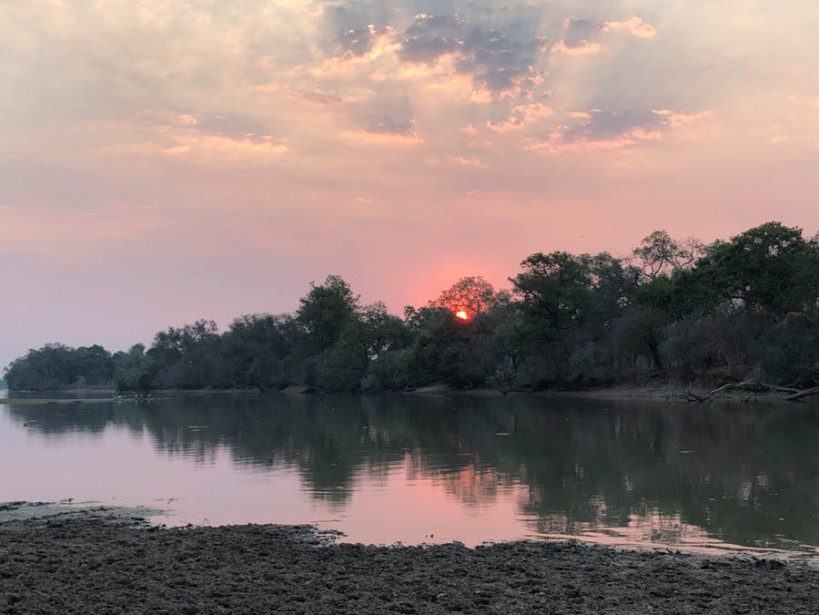 No visit is complete without remembering Louise: this time Stretch puts a collection of deep-red velvety sausage-tree flowers on a braai grill, and we lower it into the Zambezi. The flowers bob off into the fast-moving current and head out towards Mozambique. Rest in peace, darling daughter. 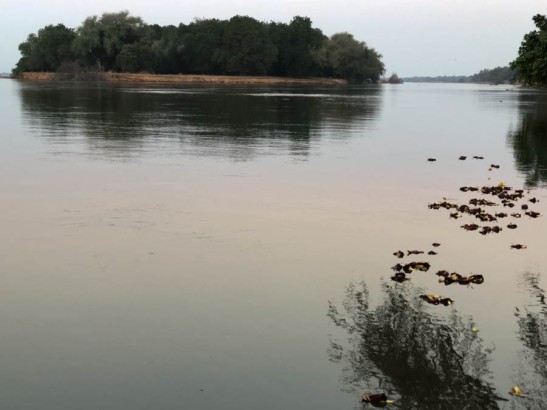 3 thoughts on “Another successful trip to Mana Pools, Zimbabwe”