Me with a whale shark, Kwatisore Bay

We arrive at Manokwari after 4 flights and 36 hours of travelling, bang on time and with all our luggage. The Dewi Nusantara, just out of dry dock gleams in the half light – the rain lashing down as we motor out to her by tender. This is our third trip and the welcome is warm, many faces familiar.

The Dewi Nusantara in prefect reflection 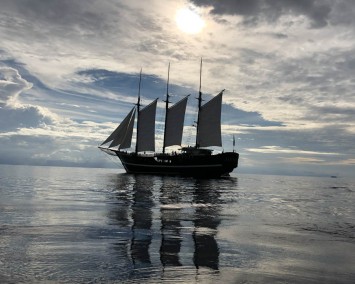 The Dewi Nusantara basked in silver

All does not go well at first: we have a broken engine which takes all night to repair and we lose valuable time, compounded by another broken engine on one of the tenders which has to be repaired remotely as the mechanic is in Sorong. Anxious moments but at last we are on our way…and diving!

Simone, the Cruise dIrector and our dive guide, Handri 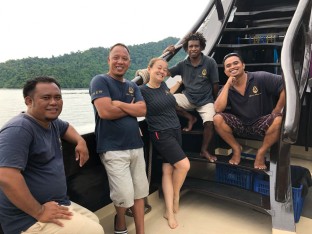 Handri with backdrop of beautiful islands

Our shipmates are mostly American. There is a is large party of friends and cousins; as with all groups there are diverse political perspectives and they have banned all talk of politics on board.

The group all kitted up

The anthropologist in me is interested in finding out why people think as they do and rules are made to be broken. You cannot escape Brexit and Trump – the Americans as interested in our views on Europe as we are in their’s of the state of their union.

Team US on early morning exercise 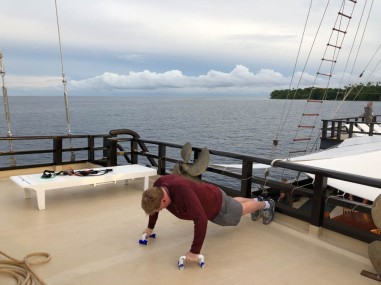 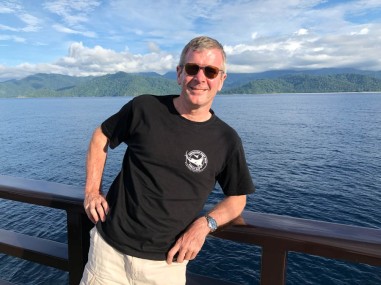 But it is true we are here to enjoy the diving and to forget about the world for 10 days. Cenderwasih Bay is so remote that we are phoneless and data-less for most of the trip – only learning of England’s victory over Columbia 3 days after the event from some fisherman on a bagan. 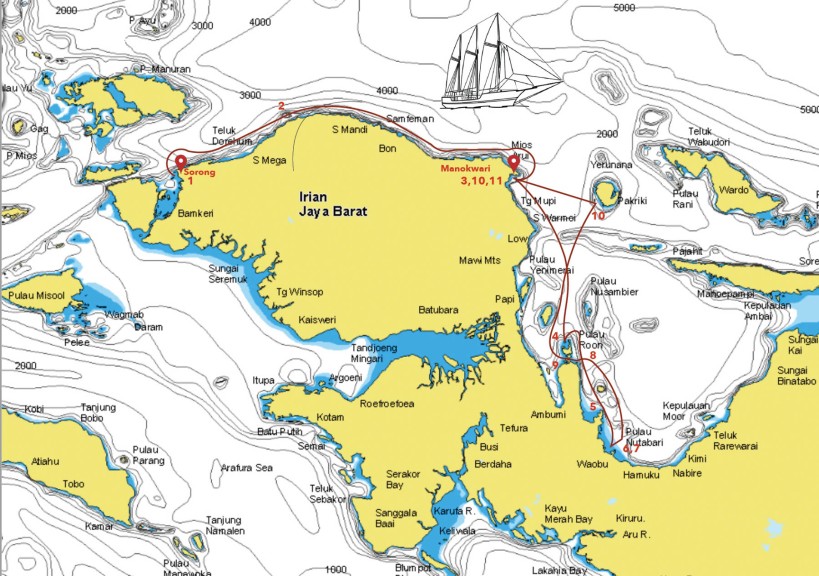 Red marks our route on the Birds Head Seascape

A bagan is a floating fishing platform which moves around with its resident fisherman who stay on board for weeks at a time, only leaving to deposit their catch. This is where we will find our whale sharks, who have traditionally been fed small silver fish for good luck. The canny fishermen realise it’s smarter to sell their auspicious offerings to us…

It takes us three days and long crossings in a humongous storm to reach the southernmost part of the bay where the whale sharks live all year round. In every area we visit we need to get permission to dive from the local village, which can delay an early start. Seems fair to me – our gin palace floats in laden with the super-rich – why should we begrudge paying the locals for trespassing on their underwater paradise?

On D-day for whale sharks we get our permission but have to send scouts to find them. Handri, our dive guide for the past two trips, returns jubilant and we head off in the tenders. There are four juveniles gobbling up the offerings and swimming around; none of them as big as the cruising whale shark we found by chance in Ningaloo, Western Australia and swam with for 20 minutes or so. Nevertheless it is humbling to be so close to such beautiful creatures, who manoeuvre in and out of 18 curious divers with ease, occasionally giving us a nudge, as when I was snorkelling and one came up right underneath me, glancing my body as its head suddenly appeared below my eyes. I don’t know who was more shocked.

About to be mown down!

We spend two days with the whale sharks, four dives/snorkels. After the third time, Ross and I called time and we sat it out – it’s extremely tiring bobbing around at 5m for 60 minutes –  only to discover that the largest of all came visiting while we were relaxing on board. Just our luck! 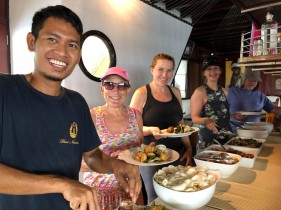 Disappointingly there are few big fish here… the lack of current means there are no schooling fish like we saw in Raja Ampat; what large fish remain are eaten by the villagers. Cenderawasih is famous for its unique endemic species, as well as the whale sharks. Thousands, even millions, of years ago it was completely enclosed which allowed for the development of some of these tiny reef fishes – flasher-wrasses, dotty backs and special butterfly fishes amongst others.

Anemone fish sharing his home with a load of shrimps 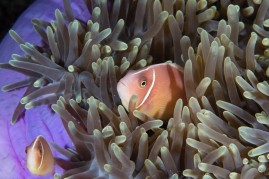 Real anemone fish – only found in this area

Only as we go further north on our return do we see the opulent coral gardens, one with the largest sponges we have ever seen, higher than a person, 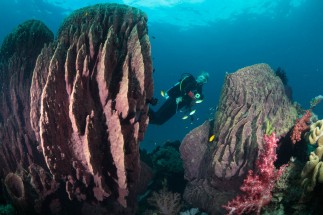 and the fish shoals that we expected, plus a couple of WW2 wrecks. On our last night a big storm blows up and the sea has such a swell on it that we are unable to dive and I am confined to my cabin with my first-ever attack of seasickness. Not all are so struck as at breakfast next day I witness a variation on America’s favourite peanut butter and jelly toast – peanut butter and Nutella. 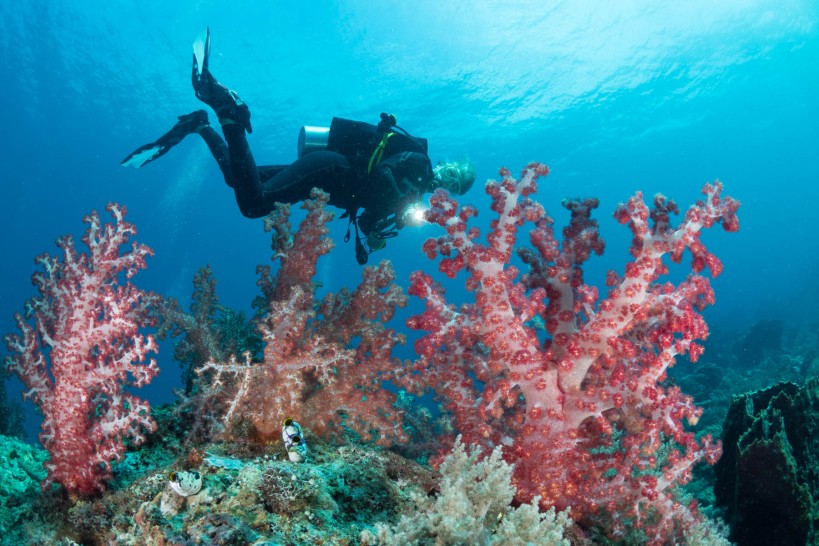 Diving with the whale sharks was a privilege, especially with not another boat in sight the whole trip but, for me, Raja Ampat remains the world’s best dive area, with its diverse habitat and mix of large and small fish – nothing beats the elegance of soaring mantas or the thrill of seeing huge shoals of fusiliers or snappers dancing in the current. 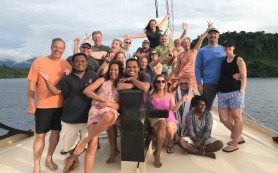 On the beach, in the middle of nowhere 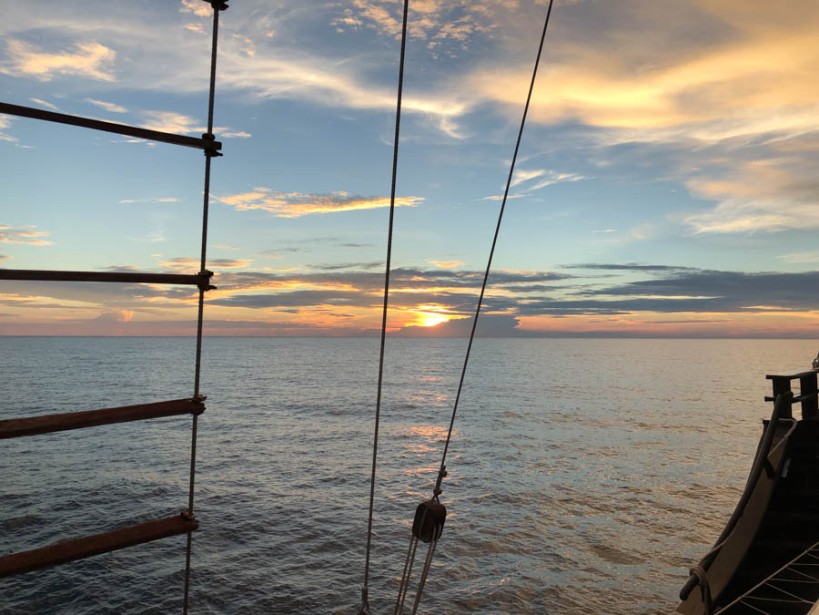 Thank you Ross for the underwater shots (catch his webpage on http://www.rosscattell.net/diving/cenderawasih/cender-intro.htm) and Cory for the shot of me being run over by a monster of the deep.

7 thoughts on “Diving with whale sharks in Papua”