My new friends on Roon island

No dive trip is complete without a shore visit. The first village is on the island of Roon where they have just had their 2018 festival. We are greeted by the village elder and his tiny daughter decked up in a grass skirt and looking overwhelmed. The welcome committee extends to a local band playing on bamboo flutes and locally-made drums, and then a procession of grandmas, sashaying along the main road, at right angles ot the extraordinary statue of a missionary that dominates the square.

Grannies and the cutie-pie again 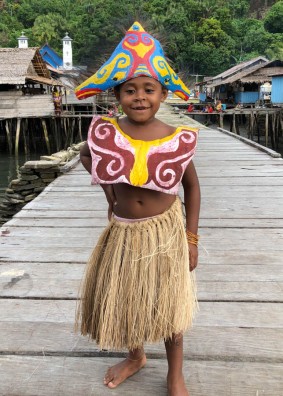 The headman’s daughter, with a rare smile 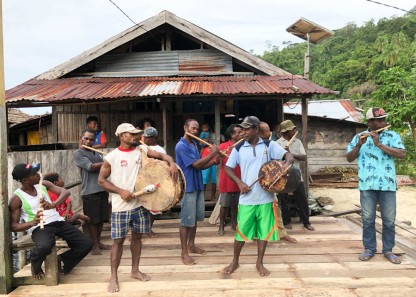 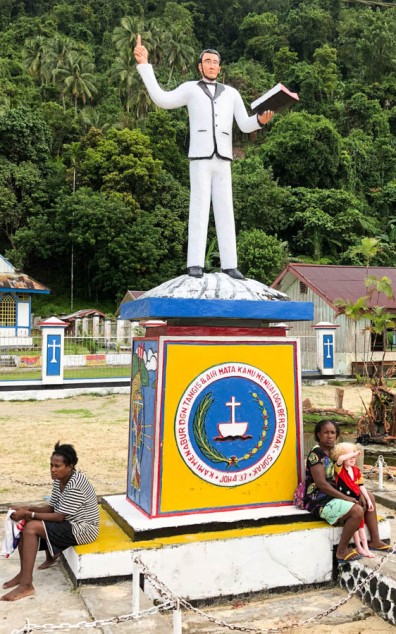 The missionary dominating the square

Next we are led to the stage and are treated to a display of traditional dancing. The young men and women are all decorated with white body and face paint, and are wearing grass skirts, shells and beads, with the odd cassowary feather or coconut head-dress. They delight in taking photos with us.

I said ‘Look cool’ – and they obliged! 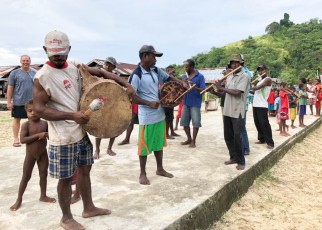 The band in action again – for the dancing! 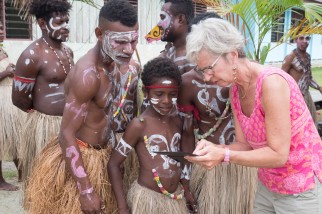 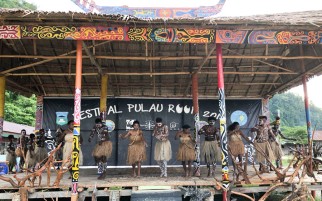 There are kids everywhere and all smile delightedly when we show them their pictures, their new pencils firmly clenched in their fingers. We wander round the village, which is set on stilts over some rather rank mud flats, and buy some obligatory souvenirs, rather crude penis-type carvings. 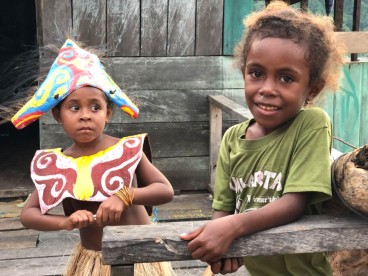 There she is again, looking bemused 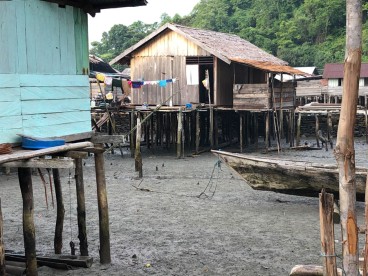 The rather dank mud 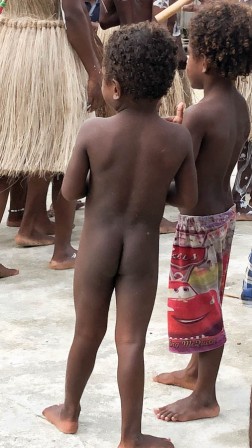 Wandering around with a retinue

I am thrilled to see they also have raised beds here, not unlike mine at home, and are growing vegetables. Flowers line the pathways and there are even rubbish bins. Someone is making an effort 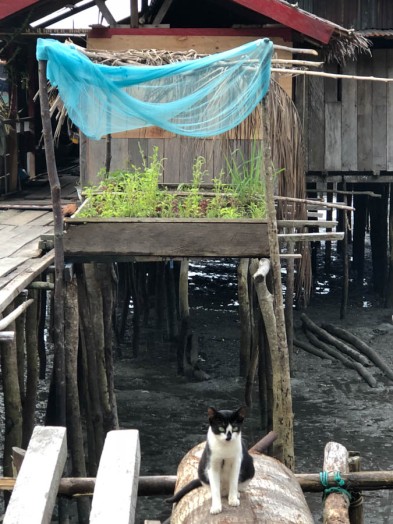 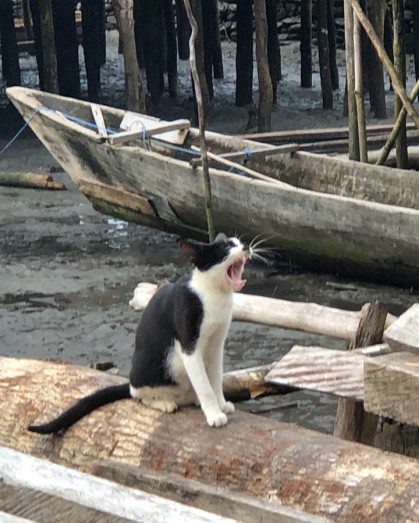 We caused quite a stir

Ross and the the villagers waving us off 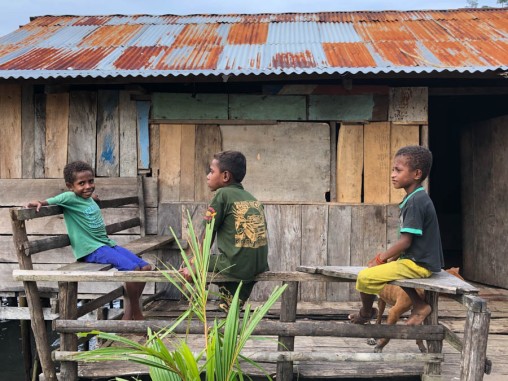 The next day we visit another village, Neppan Yaur, much smaller comprising only 30 families. This time there is no grand reception, just a group of mothers and babies sitting under the village tree, gossiping. The kids swarm around us again, happy with their new pencils, and some matcha wafers from Japan. 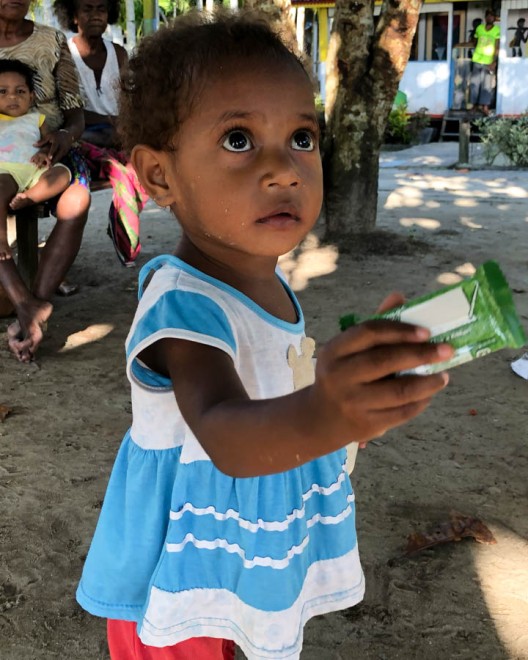 Fishing boats on the beach

This village seems richer than the last, with well-built wooden houses. It is late afternoon and the women are chopping up fish, dogs waiting expectantly for the leftovers. There is a large school, but only one classroom seems to be in action – complicated sums on the whiteboard, and one rather sad Bahasa Indonesia textbook on the teacher’s desk. We wonder how much of the education spend reaches this far-flung outpost in Indonesia’s most neglected province. 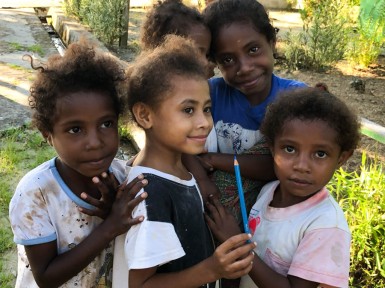 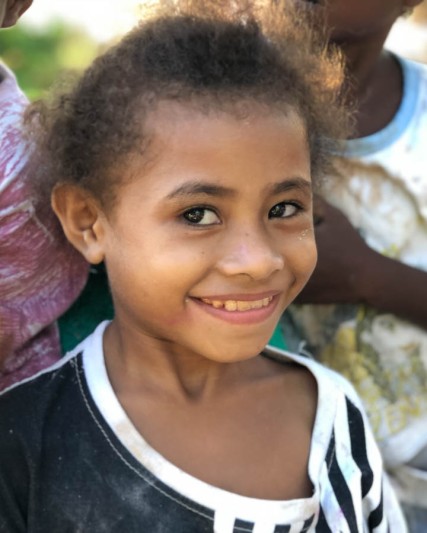 We are shown inside the church, dominating the village, clean and well kept, with rows of pews. Like all of West Papua this village is strongly Protestant as it was colonised by the Dutch. Judging by our dancing display, animistic beliefs and customs remain intertwined with the new dogma.

View out to the Dewi 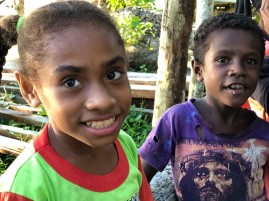 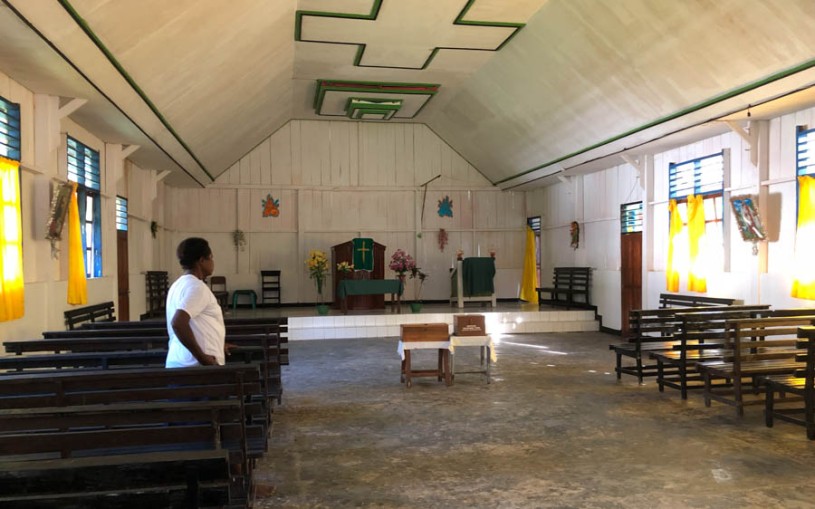 inside, a bit spartan

I feel it is important for us to get a feel for village life here as we circumnavigate this bay in our luxury boat. There could hardly be a greater contrast. No wonder some of the children look at us wide-eyed with amazement, and the women dissolve into gentle giggles as we join in the dance. It reminds me of when I was in my 20s and travelling round Papua New Guinea. In such remote places the only obvious changes are cell phones and satellite TV receptors. Otherwise time has stood still.