Ross and I are visiting Nepal to see the progress of United World Schools in this remote eastern region of Sankhuwasabha. After our exhausting first 12.5 hour day, the next two days are marginally less long but no less rigorous as the roads are even worse. The schools at Wana and Nagi Dada are perched precipitously on ridges overlooking glorious terraces, with misty mountains dominating the distant horizon. When it’s clear you can see the snowy peaks of Makalu and Kanchenjunga, the third highest mountain in the world after Everest and K2. Truly majestic scenery. 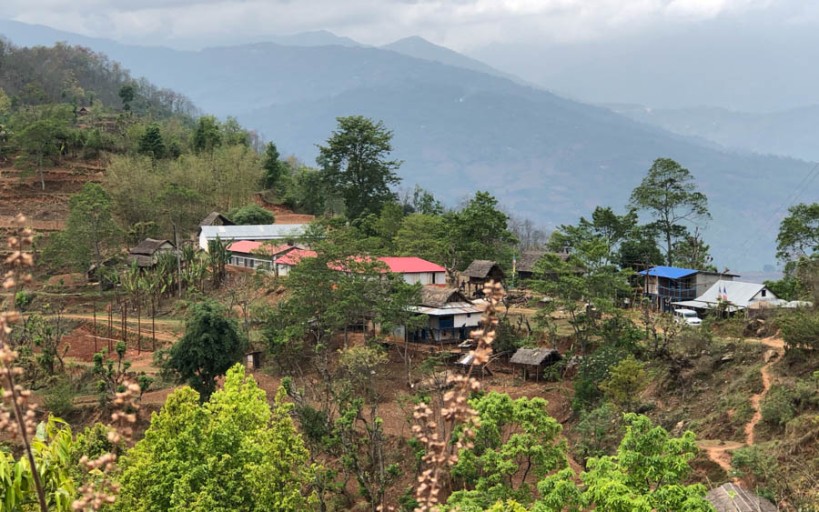 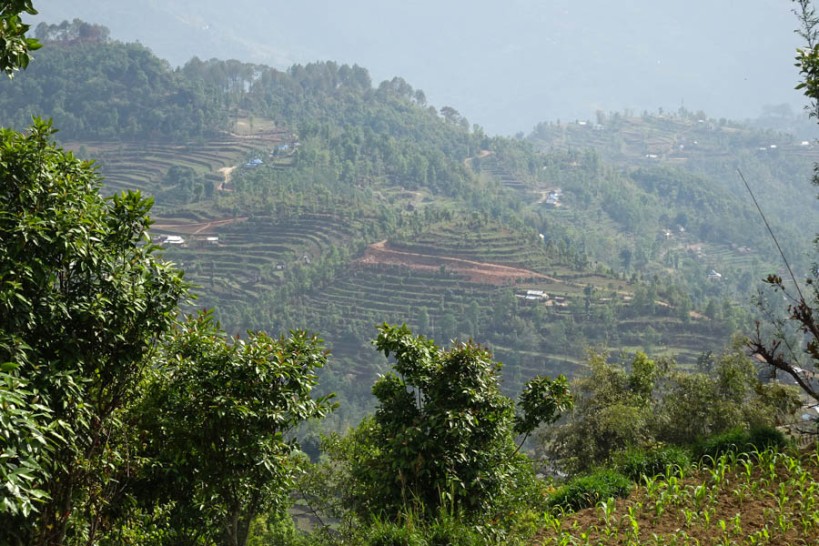 The view from Nagi Dada

At Wana, sponsored by Chris and Lynsey Bell, we see a school in full swing for the first time, although it’s the beginning of the school year and some of the kids have yet to enrol – and it’s also planting time. We join in a ‘social subject’ class taught by the Principal. 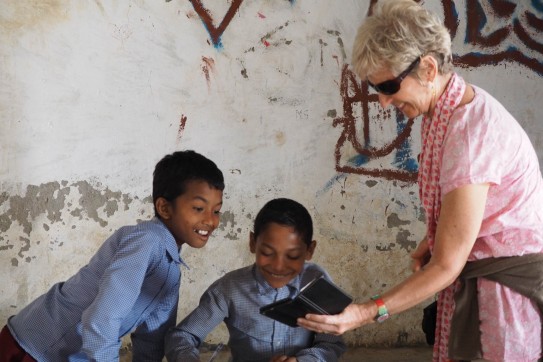 Showing the kids their pics 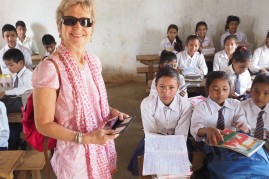 Surya asks the children what they want to do when they grow up: several girls want to be teachers, one  a nurse; of the  boys, shyer always than the girls, one wants to be in the army, another engineer. Surya says this is great progress as the height of ambition – apart from going to the Gulf to work – used to be a driver. Girls had no option if uneducated than to marry, bear children and work in the fields. Or to be trafficked. 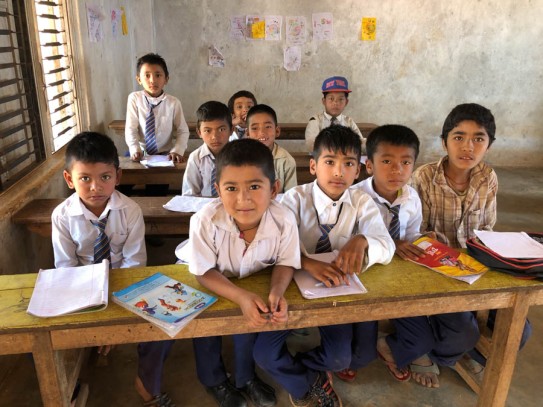 Surya with the Principal at Wana 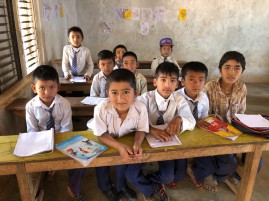 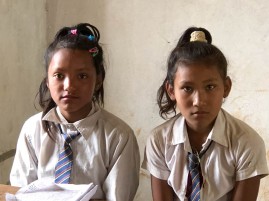 We are impressed that they are learning English as young as eight, although some of the national curriculum texts seem rather difficult. In Nagi Dada the children are chanting  ‘cabbage is round’ , ‘strawberries are su-weeet’ and ‘bananas  are yum’, although I wonder if they know what they are saying let alone what a strawberry is!  And it is difficult to convert the teachers, especially the government teachers, from the age-old tradition of rote learning, but we are trying… 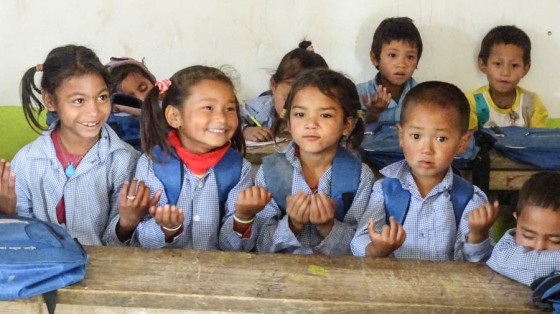 Our car is more intersting than lessons, Nagi 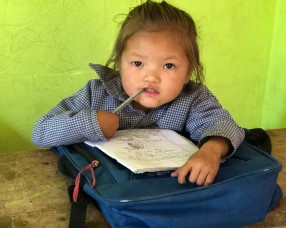 And its all too much for this little one 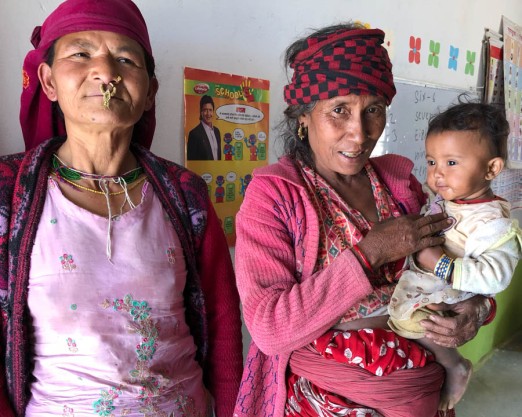 And the grannies came too, Nagi

The new wall at Nagi Dada, built for safety

He finally wakes up! Nagi 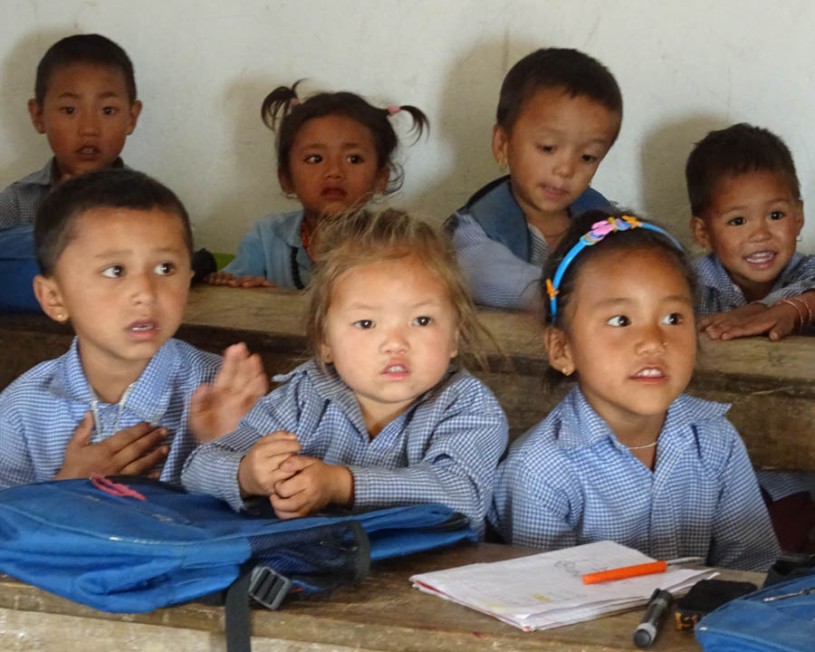 I love seeing the very little ones in Heluwabesi shouting out their numbers: one-three thirteen, one-four fourteen etc with gusto. In another class, a small girl is coaching her friends on their numbers with a pointing stick. And in a class of 11 year-olds in the kids are doing geometry with protractors. This is a village that only got electricity three months ago. 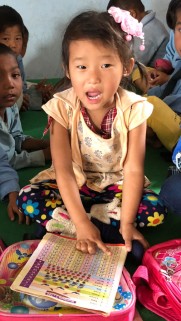 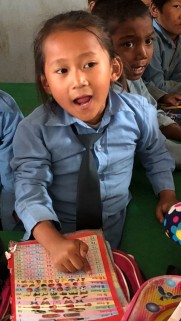 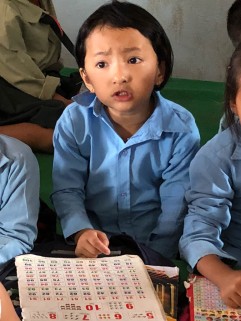 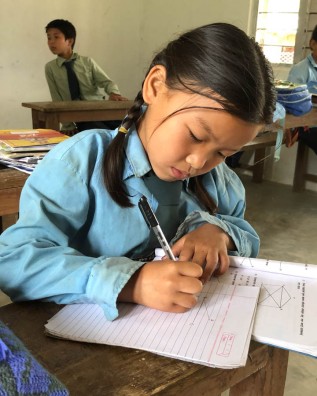 The standard of writing in Nepali in all the schools is remarkable – it’ s a complex language. Occasionally we see examples of children writing in English too – small stories, admittedly copied, but still quite a feat in another language. In Nagi Dada the younger children are singing songs, one about brushing teeth, washing face, combing hair, in English. in this case the accompanying actions reassure me that they do know what it’s all about! At Wana we are treated to a song, newly-learned after listening to a tape a couple of times. 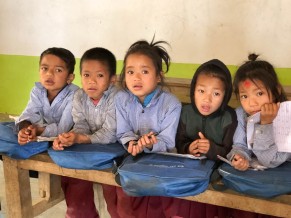 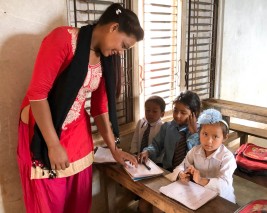 In Nagi Dada and Heluwabesi (sponsored by St Christopher’s, Bahrein) we meet up with more fellows, young people who spend two years in our schools: Dikesh in his spotless black Armani jeans – quite a feat – and Ashish in Heluwabesi. Again I am impressed by their dedication to UWS – and of all the education officers we meet, who also live in the midst of their communities and sometimes have to go from place to place on the erratic public transport unless we can afford motorbikes for them.

With scholar Ashish at Heluwabesi School

Three cups of tea – hehe, this time no cheating 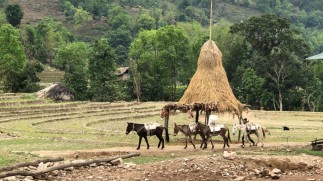 Hulawabesi – the end of the road, its donkeys from here

Nagi Dada in particular must be a difficult place to live, at the end of the road; it is one of our poorest communities, and sponsored by our friends John and Hilary Pooler. We give a lift down the hill to some lads, who are thrilled with the nuts and raisins I dole out, stuffing them like treasure into their pockets. 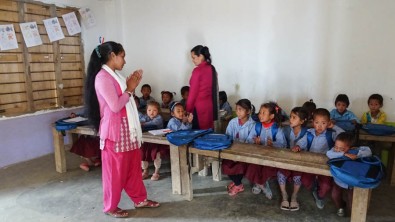 Nagi Dada teachers, with Fellow Dikesh to my left

The final school we visit, Lebrang, sponsored by David Waller and friends, is visible from the main road but a 2-hour drive through a river and again up precipitous roads. If you hit a goat or a cow it will cost you a minimum of $3000, an ox is only $100 (neutered so no life potential), but a person is at least $5000, even a chicken could set you back a fair sum so, despite the roads being crowded with livestock, people and dogs, there are few accidents. This community was so anxious to get a school they built the road to it themselves.

More fabulous scenery on the way to Lebrang 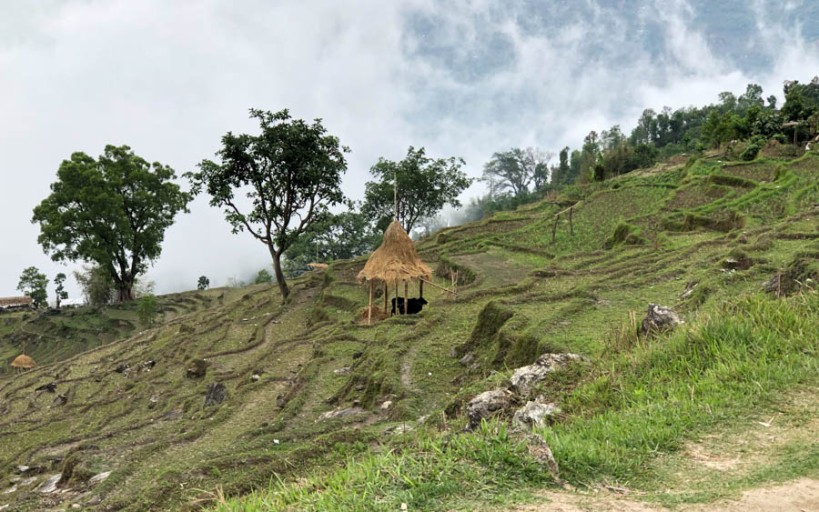 On the way to Hulawabesi

At UWS we start young with a Kindergarten class and a pre-standard 1.  It is lovely to see the little ones all looking at books, belting out their numbers, their mums close by. In Lebrang, the health visitor is giving vaccinations to all the babies under two. In a couple of the schools we visit, teachers have brought their babies who seem quite at home sleeping in the corner 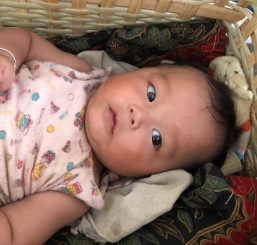 He never did anything but gurgle contentedly while his mum was teaching..

Mothers and babies waiting for vaccinations 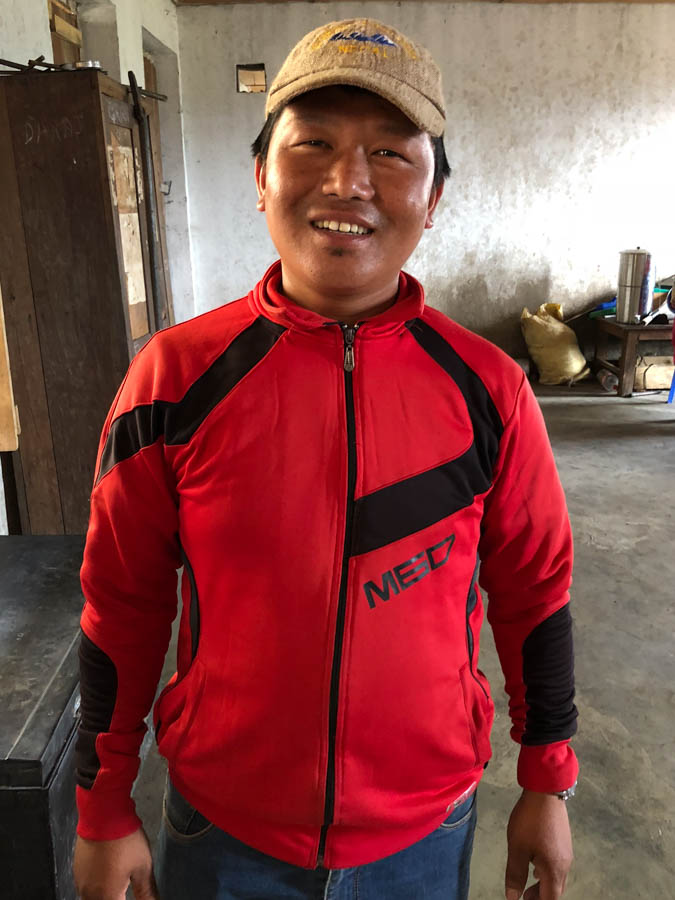 It is fitting that our last visit, like our first, is marked by garlands and more aavhir daubs on the forehead. The elders and parents turn up in droves to see us. This is the poorest place we see – the children are all tiny as a result of malnutrition and,  like the others, all have runny noses and terrible chesty coughs. Their uniforms are tattered and dirty but they wear it with pride, and smiles shine out of their grubby little faces. 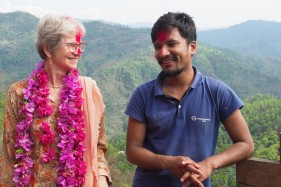 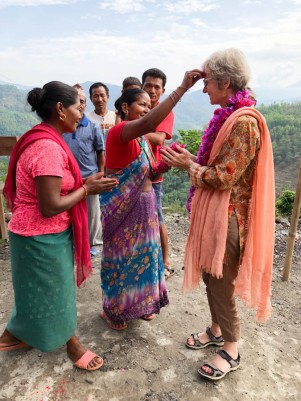 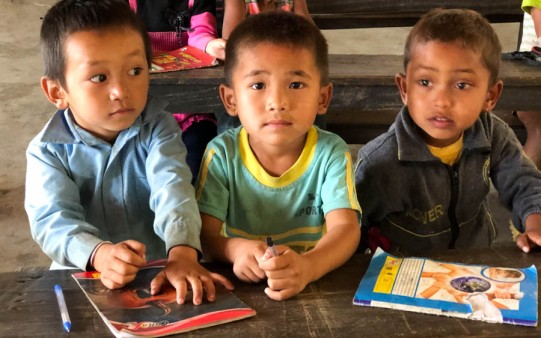 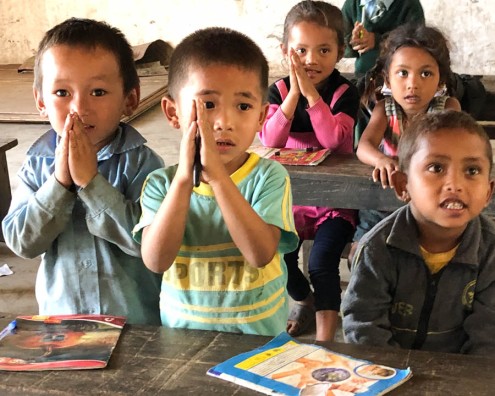 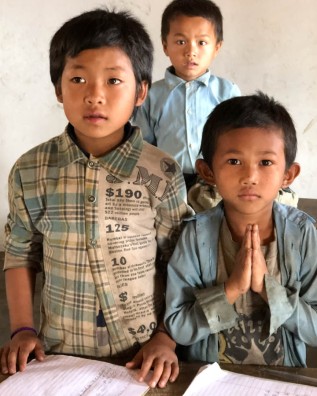 Visiting such disadvantaged villages reinforces the work that we do. By educating these children, teaching them to read, write and count – in English as well as Nepali –  we are giving them a chance in life. In our three full days we covered 550 kms and visited nine schools, including the one under construction, and really got under the skin of this beautiful country and its charming people.

If you have been moved by these blogs check out our website and make a donation.

And it’s goodbye from us, Lebrang