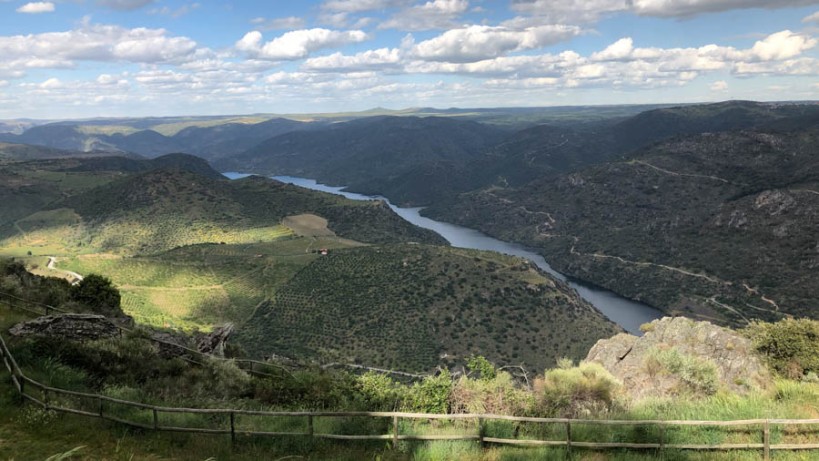 Looking over into Spain, the other side of the Douro river

With hardly time to breathe we are off again, this time to Portugal. At the UWS Gala dinner I successfully bid for a weekend in the Douro Valley on one of the region’s oldest wine estates. As it is a holiday weekend in Switzerland we decide to go a day early and spend a night in Porto. 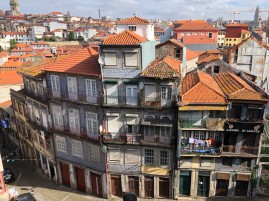 The red tiles of Porto

We are pleasantly surprised by the city, with its fine old Baroque buildings, steep narrow cobbled streets, lined with old houses sporting fine ironwork and stunning tiles. Nowhere are these better than on the main hall of the railway station.

The tiles at teh main station, over the ticket office entrances 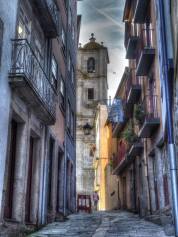 Detail from the tiles

After we have settled in to our pretty little AS 1829 hotel, bang in the middle of the old part of town, we take a wander to sip a glass of wine in one of the numerous bars that overlook the Douro river. As soon as we leave the hotel Ross is pounced on by a beggar woman. One of the less good things about Porto is the large number of beggars and buskers, all rather desperate. 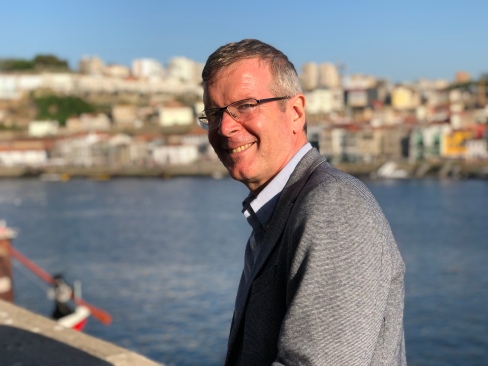 Sundowner by the river

In the hilly streets

Despite a bad forecast, the sun is shining, and there are throngs of tourists doing the rounds, from busloads of Chinese (yes, they are everywhere, even in Nepal) to big groups of French friends and families taking advantage of the holiday, and a few Brits. Apparently 10 years ago Porto was a dangerous place, full of thieves, but thanks to Ryanair it has become transformed. 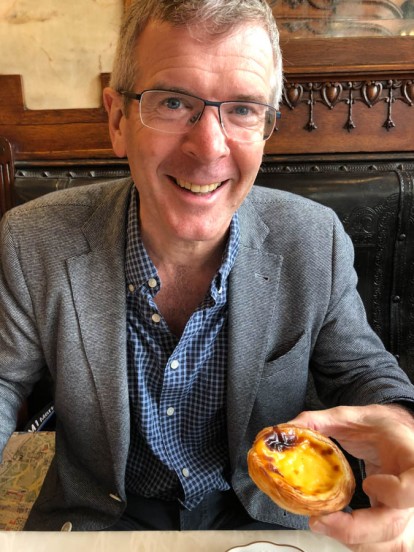 And its a custard tart! 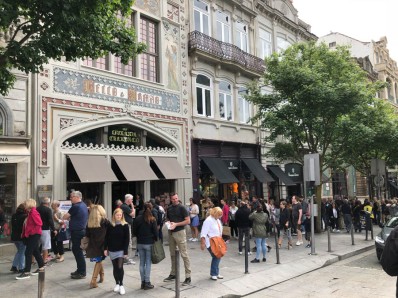 Lines of tourists outside the famous bookshop

The following morning after a run around the main sites, we set of for Freixo de Espada à Cinta (translates as the ash tree with a sword in tis belt, a truly strange name for a town), right on the eastern border with Spain, and home to the Gomes Mota family who have owned the Maritávora estate since 1870, who are to be our hosts.

Manuel advised us to take the scenic route through the heart of the Douro winelands, stopping off at Pinhão for lunch en route. The countryside alternates between fertile terraces, not dissimilar to Nepal, mountain-scapes with gorse and heather and, as we head further east, stony, dry undulating vineyards, with wild lavender, olive and almond trees.

On the way to Pinhao 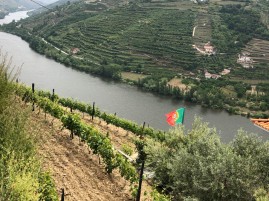 We are welcomed warmly and soon are sitting down to a tasty dinner cooked over almond wood, with delicious accompanying wines, ranging from their prize-winning  Branco 2014 Grande Reserva No 1 and another, newer, white, to the dry and aromatic 2005 red (not available except to family!) and its more fruity 2012 relation. We also sampled their other prize-winning 2014 Grande Reserva Red, recognized by Wine Enthusiast Magazine with 93 points at the beginning of the year. 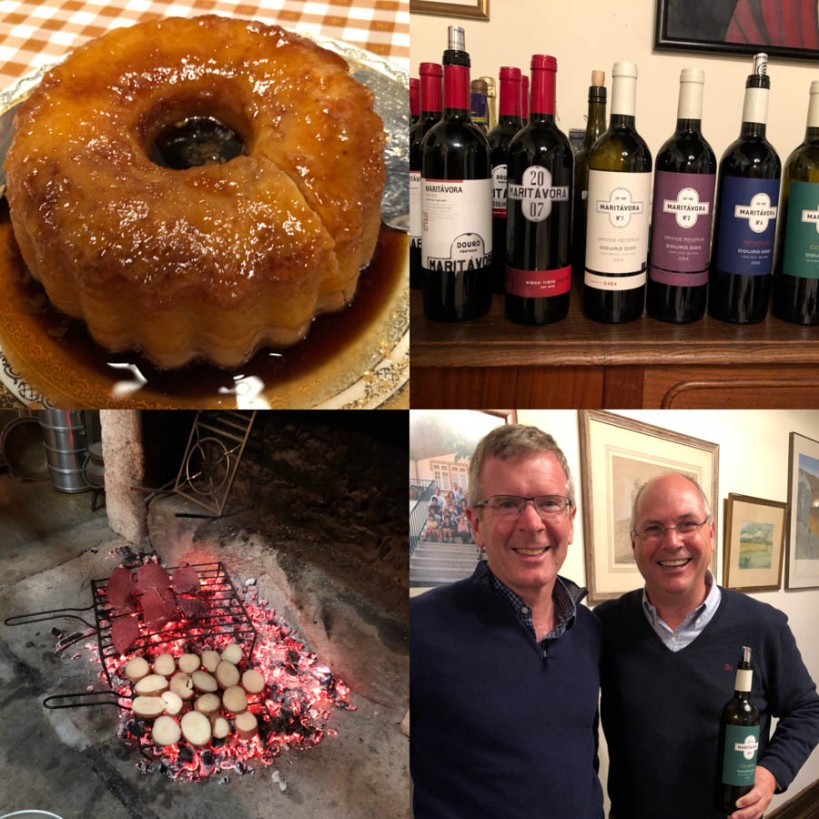 clockwise: port caramel custard; the wines of the quinta; Manuel and Ross getting stuck in; real bbq steak and potatoes…

It is cold and windy when we inspect the vineyards and the winery itself. Manuel has three other business in Lisbon so only comes to supervise the vineyards once a month; but he has grand plans to redevelop the winery and convert a new family home in the midst of their ancient olive groves, some trees being over 600 years old.

There are old and new vines, all tenderly husbanded, almond and chestnut trees as well. Maria, Manuel’s wife helps in the business, and his daughter Sofia and her partner Tiago are visiting from Madrid. 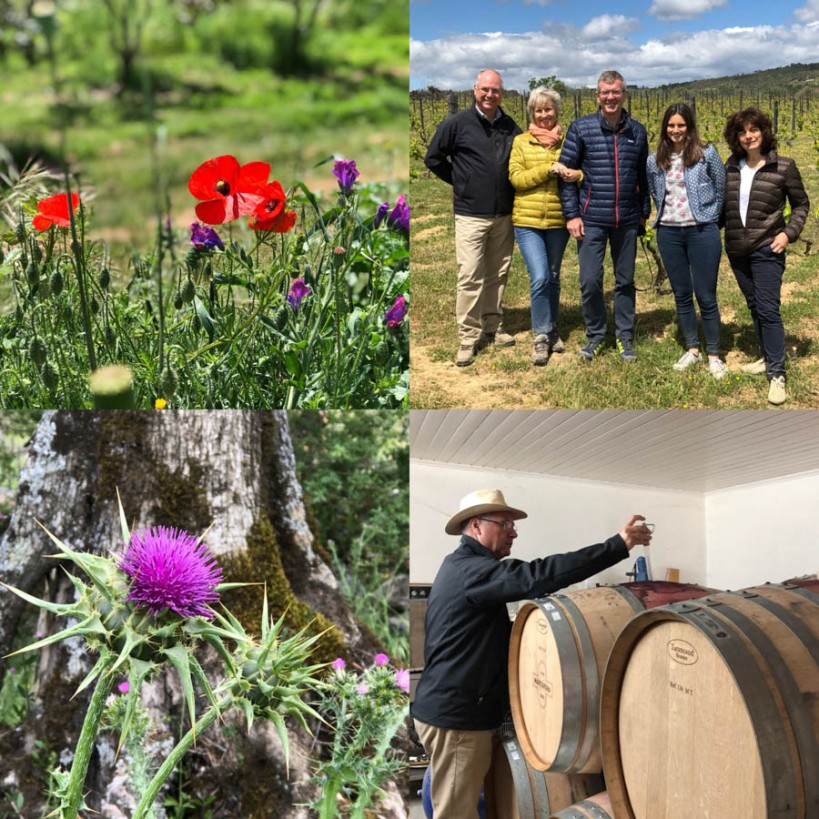 On the quinta – wildflowers and ancient olive trees, family line up with Manuel’s wife Maria and daughter Sofia, who is on the UWS council and does our metrics

Manuel’s family has been in the region since the 1700s and his relatives own hundreds of hectares of vineyards. The house is full of family photographs and the small town reflects the family’s influence, with statues to his grandfather and several splendid family houses, now largely uninhabited. As with much of the Douro region the young have left the villages to the older generation and there is an air of gentle decay with houses failing into disrepair. Many are boarded up as this area supplies migrant labour in the EU: they build grand homes which they can only return to once a year. They have been replaced in turn by new migrants –  Bulgarians.

Tractor breaking the stones in this arid and ricky winescape 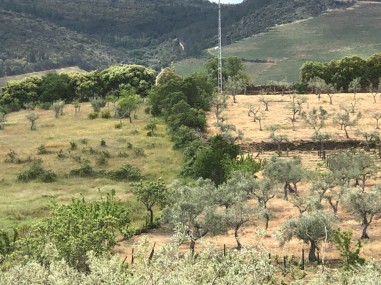 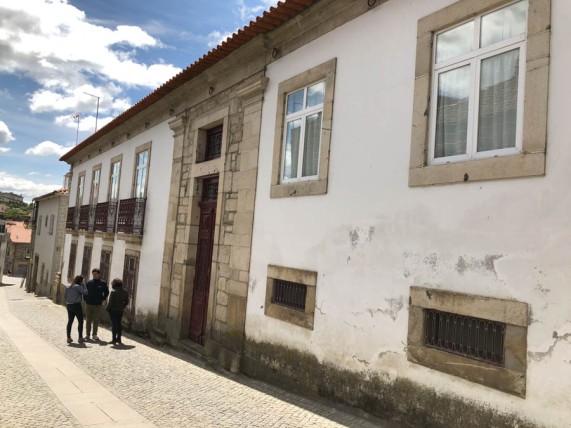 On Saturday we go for a drive through stunning scenery, rocky outcrops, closely sculpted terraces, mulberry and almond trees, overlooking the Douro River and over into Spain, where the countryside changes into cattle pasture – no vineyards at all.

Looking over into Spain 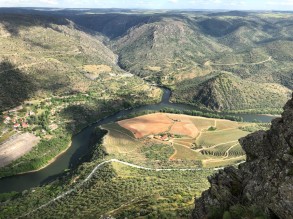 View into the Douro valley, with all the erring 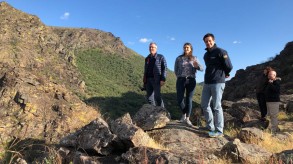 Ross, Sofia and Tiago looking at the Roman Road

There is even a Roman Road, made from granite slabs, which winds up and over the hillside, a path for the wretched soldiers, or slaves, to bring booty back to Rome. Just after this is the Quinta de S Tiago, belonging to Manuel’s Uncle, an 82 year-old retired Admiral, who has 500 hectares of vineyards which he sells for port. Luckily for us he still has some of his 1963 vintage which we sip on his arbour, surrounded by the sound of a babbling brook, a distant cuckoo, the twittering of swallows – and nothing else…heaven. 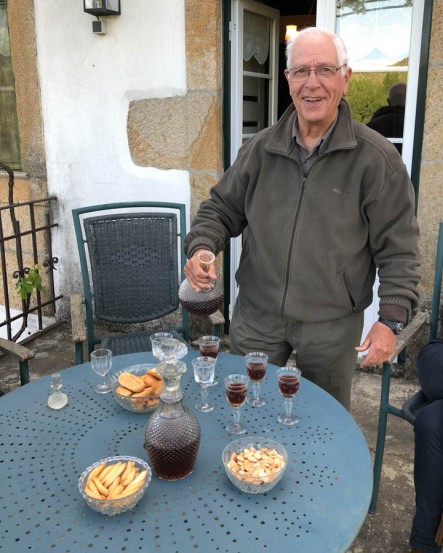 Manuel and Maria are great hosts. We eat out locally at lunchtimes, and dine in at night. Every meal is washed down with superb wine and port…on the last night it is Sofia’s birthday port. It is a family tradition to lay down hundreds of bottles to celebrate the birth of  each child. The over-riding impression is one of a close-knit family community which looks out for each other’s interests. So different from the British. 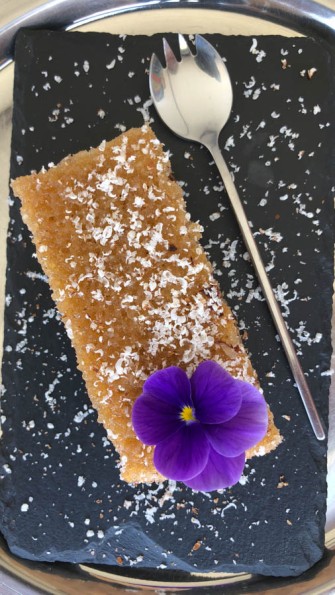 Bacalao (salt cod) with a savoury crumb on spinach

We were so privileged to be invited into the home of the charming Gomes Mota family, real Portuguese wine aristocracy, to experience their business from the inside, and to be made to feel so welcome.

You can find out more about Maritávora wines here