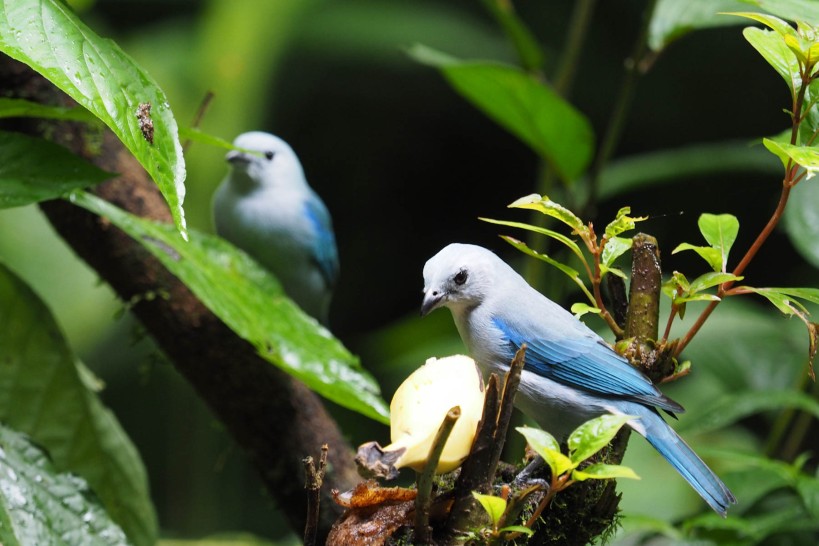 We leave lovely Ometepe by the ferry, and arrive at the border after an hour or so. Here we say goodbye to Bayardo, our driver for the past 10 days, and lug our bags through the Nicaragua border formalities – all smiles – and into Costa Rica – all grumps. It’s blazing hot and there is no sign of the rental car, which Diego has nobly volunteered to drive (great job Diego!). We mooch around in the scant shade looking in wonderment at the massive pantechnicons which ply the Transamerica Highway from north to south. Their line to cross the border is at least 1-2 kms long. Awful. 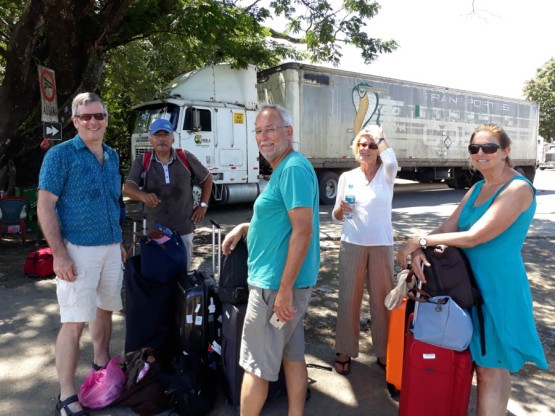 Some wags quipped this was a rather large hire car! 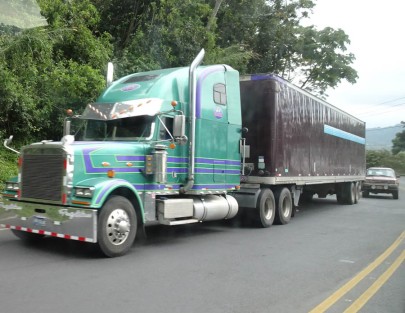 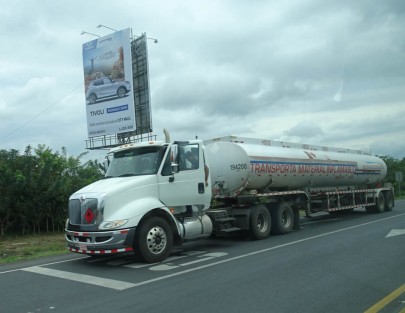 No sooner we leave Nicaragua we notice the comparative affluence of Costa Rica. The houses are all concrete and plastered, brightly painted and adorned with satellite dishes, the yards tidier, the animals fatter. There are lush plantations of bananas, papaya, sugar, pineapple, maize, coffee and rice (this is the home of Chiquita, Dole, Del Monte and numerous other household names after all).

Ross thinks this is a tanager…it’s beautiful whatever… 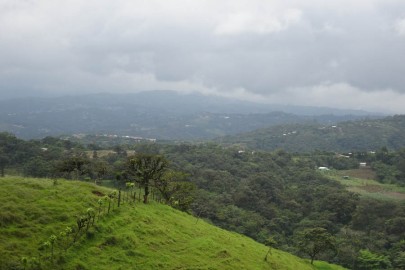 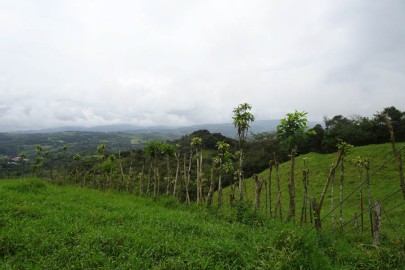 We arrive at the Hacienda Guachipelin in the Rincon de la Vieja (it means old woman’s frying pan, a reference to the bobbing volcanic activity in the mountains all around us). The hotel is a great disappointment – very basic and the food, as we are to discover later, even worse. With no competition it is relying on location, location, location. 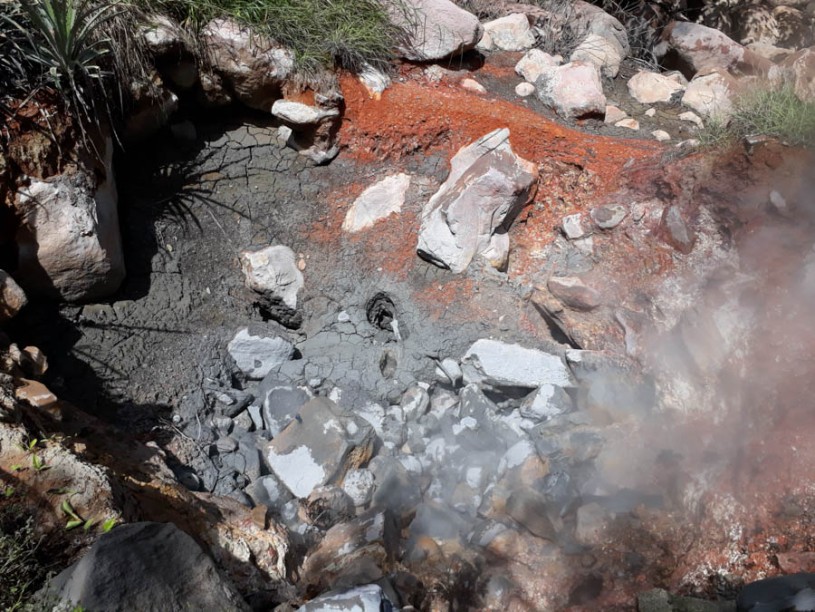 As it is getting late we stagger off on what we are told is a 30-minute trail to a nearby waterfall. It is incredibly muddy and takes us almost an hour; Ross braves the water, but the current is too strong for me, and we turn round almost imiediately, walking back in the gloaming, under the almost-full moon, accompanied by the hotel dogs. It is rather magical.

The next morning we set off to the national park. The hotel is offering a guide at $39 pp; we find the wonderful Claudio at the gate who does the job for $40 in total. It takes us 40 minutes to go the first 200 yards – we see capuchin monkeys, gold spiders (named after the colour of their web which gleams in the sunlight), a couple of agoutis, more leaf-cutter ants (it’s the season it appears) and generally learn more about the country.

Team in front of a giant fig tree

The twitchers are out!

Costa Rica has been energy self-sufficient for over 20 years, and also supplies its neighbours (although they seem not to pay). All children are taught conservation in school – and we meet a lively troop of kids who are making drawings and taking notes, in contrast to the surly group of English teens from Preston. People are proud of their country and reputation, and rightly so. ‘Pura Vida,’  the ubiquitous Costa Rican national slogan and greeting, meaning Good Life, he tells us was borrowed from a 1950s Hollywood film.

Claudio and the kids 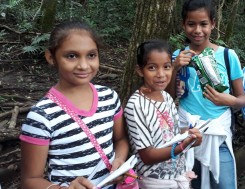 The girls were very sweet

There is astonishingly no army in CR, although it has been and remains heavily under the thumb of the US; the CR police force is large and trained by American advisors, so perhaps it amounts to the same thing. A few years ago they switched allegiance from Taiwan to China, and now export over $1bn of fruits there. It is a relatively rich country despite having no natural resources – exports such as fruit and coffee are major earners, as is tourism, with outsourcing and industrialisation beginning to take hold. 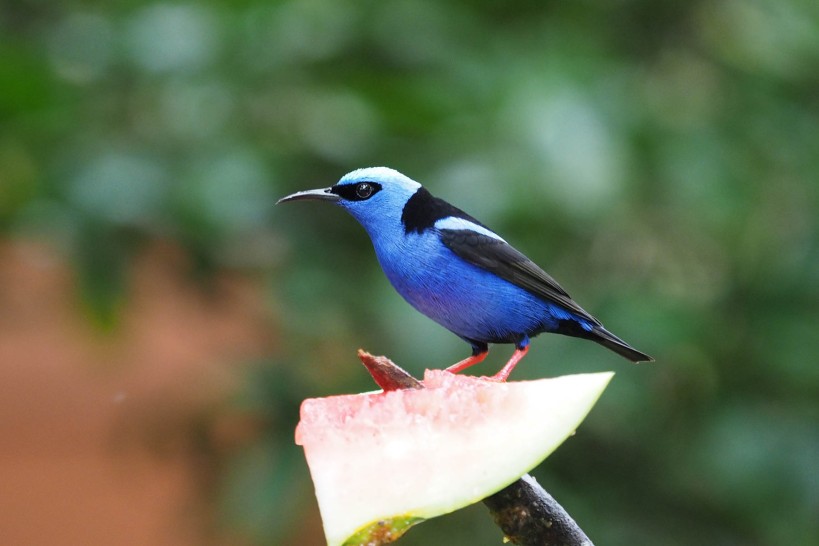 There are numerous volcanic hot spots in the park, and after our hot walk, and a (disgusting hotel) picnic, we visit one of the hot springs for a restorative mud bath and soak. Our peace is shattered when the 50 British kids turn up with their rather harassed but good-humoured teachers. Unlike then local kids they are boorish and have no manners as they push, shove and shout at each other.

Diego has a shave! 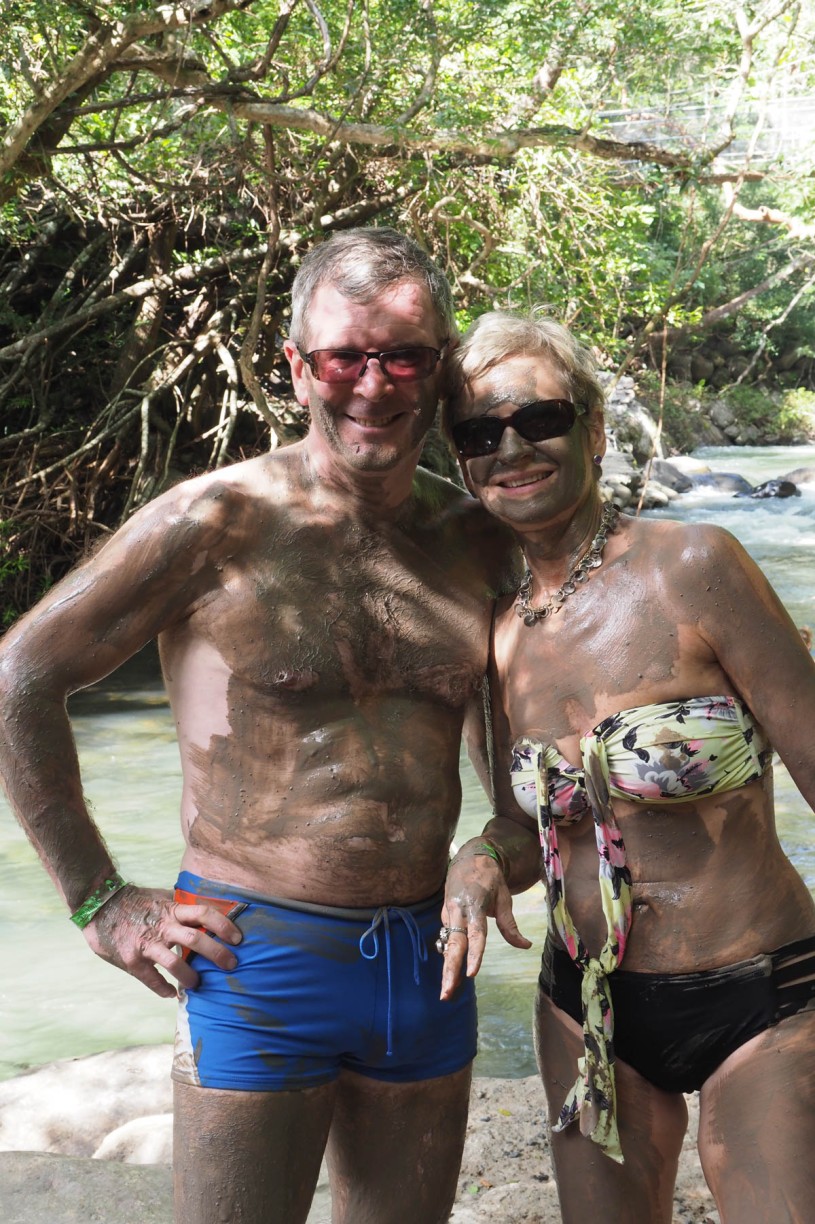 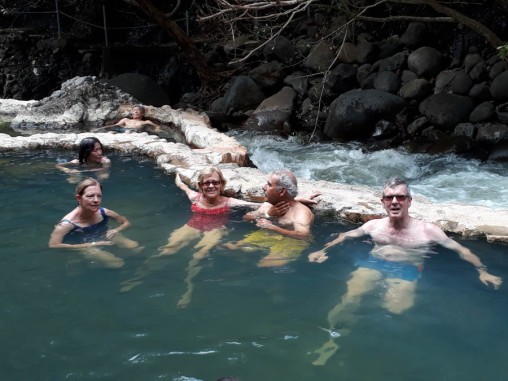 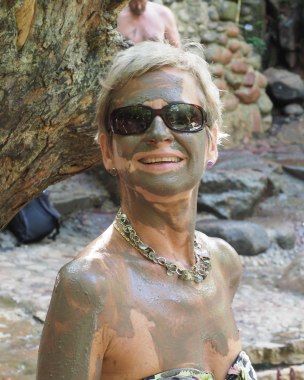 My new image for the next decade

In the evening we are introduced to local hooch, Cacique (it means shaman – perhaps on account of its magical qualities, it’s 30%) by Eric, a friend of Claudio’s, who owns the local restaurant Camino al Cerro. Here we gorge on delicious chicken soup, home-smoked pork ribs, washed down with the cacique mixed with lemon, mint and watermelon, followed by cake!

Trying out the casique at Camino al Cerro 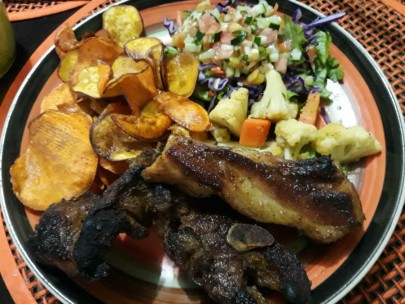 We are not sorry to leave La Hacienda but the road to Arenal is wet and we are immersed in low cloud. We can’t see the beautiful lake, sadly. El Silencio del Campo is a welcome upgrade in our fortunes – small cabanas set in lush gardens with glorious bird life feeding at the fruit they set out. It also has its own thermal springs, and spa, which the girls treat me to for my birthday. 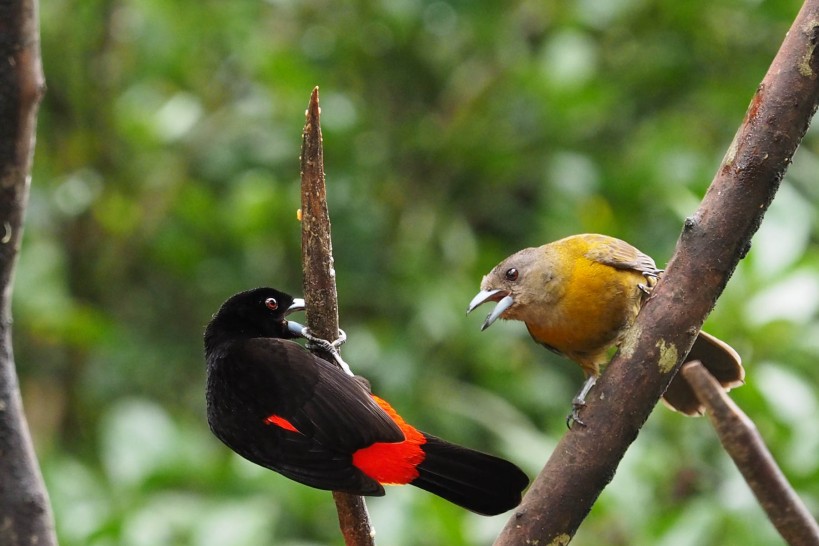 Carpe diem is the mantra, so we set off after a quick bite to visit the La Fortuna Falls. After the previous few days’ walking (and disastrous attempt to reach the Cascade de San Ramon in Ometepe), I am slightly wary of the steep descent – what goes down must come up! Luckily it is a beautifully maintained path so the 476 steps in each direction are almost a doddle! My new hip is working well, I’m pleased to say! I walk between 4 and 6 kms per day, one way and another (except when travelling), and no side effects like back pain. The worst thing is the ongoing numbness and pins and needles in my sarcoma-leg ankle as its working much harder than it’s used to!

Starting the long climb up

We notice the complete contrast in tourist numbers between Nicaragua and Costa Rica. It is also a popular retirement destination for Americans, and prices have risen steeply as a result. For sale signs are all in English, which is telling. Here the visitors swarm around by the busload, all ages, all nationalities and La Fortuna is a regular backpacker paradise, full of cheap eateries and hostels. Amazingly we find an excellent restaurant, Don Rufino, to celebrate my birthday.

In case you didn’t pick up – it was my 60th birthday on this trip! We had been warned that Arenal suffers from terrible weather and sometimes you don’t see the volcano for weeks on end, although 1 November is officially the first day of summer as we are told excitedly time and time again. 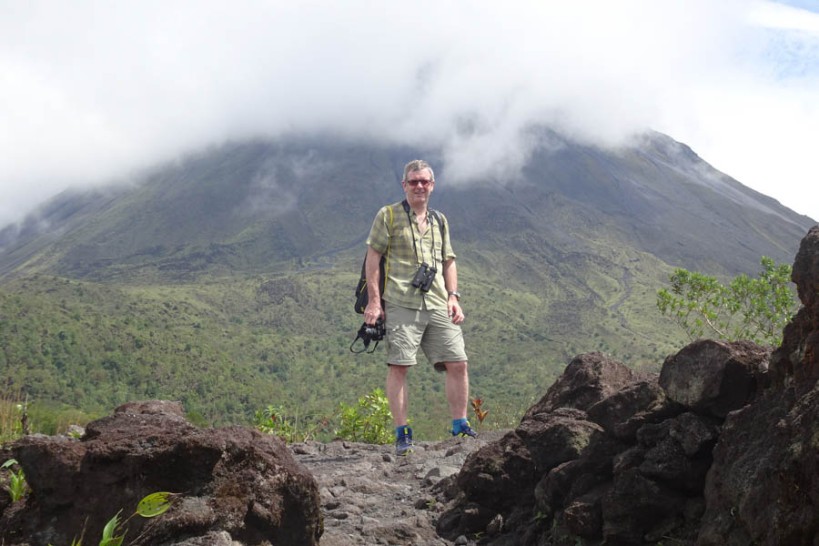 Arenal is normally shrouded in cloud – like this, or worse!

On my special day – the 3rd November – it is raining when we rise to go to the Danaos reserve. This is a Claudio recommendation, a small eco park with a short 800m trail, but we again take a guide and spend 2 very happy hours there, seeing the blue jeans frog, a handsome fellow with a red shirt and blue jeans, the Jesus Christ lizard, lots of birds, another sloth, a new heron – the boat-billed – and another butterfly hatchery and reserve. More blue Morphos, fluttering all around us.

I also took this butterfly pic

I took this one – blue grey tanager 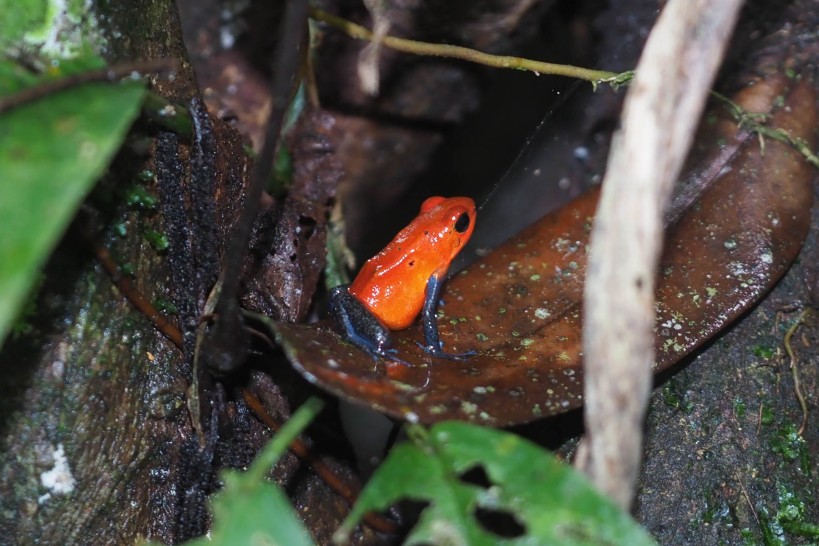 Jesus Christ lizard – because he walks on water

Then suddenly the sun comes out! We rush off to Arenal to do a walk while we can. The others take the longer 6km route and are rewarded with spider monkeys in the forest; Ross and I take the shorter (4kms) but steep, more direct, lava flow track. The views of the volcano are spectacular, as are the vistas over the surrounding countryside. In the forest we see a family of howlers with a tiny baby crashing through the canopy. 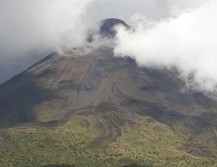 Moody volcano in and out the clouds

Birthday lunch is home-made chicken burritos in the meridor café, washed down with beer and a tres leches cake (oversweet coconut and butterscotch), topped with a strawberry! Gratis!

On the morning we leave for San Jose and the long journey home, Annie and Tim see a flock of ten toucans in the hotel gardens. We missed them on our 7 am thermal bath, sadly.

Some kind of ginger plant 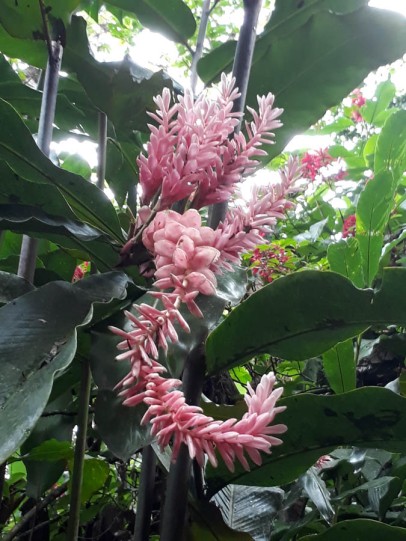 not sure what this beauty is

It’s raining again as we drive through the cloud forest; the mist is swirling around and the road winds through plantations.

As we re re-join the Trans American highway, the traffic is heavy all the way to the capital. Beside the road Christmas is coming with snowmen and reindeer for sale… 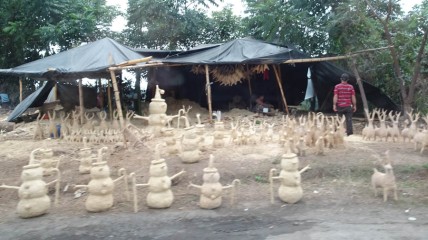 San Jose is an ugly place, but our hotel the Grano de Oro is a haven – a colonial house converted into a boutique hotel. The surrounding area seems to be more red-light than anything else, with bars and all-night music. 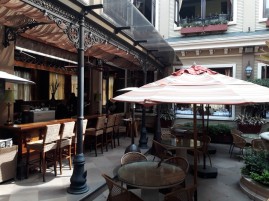 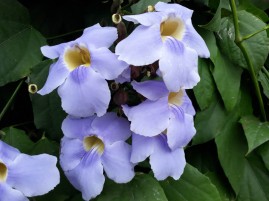 Kids having fun in one of those fountains 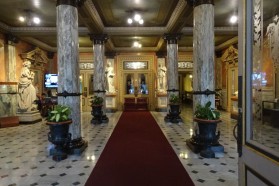 Inside the National Theatre 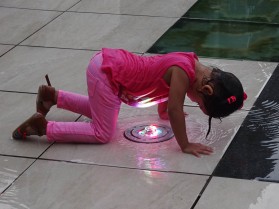 An accident, just where we were gridlocked 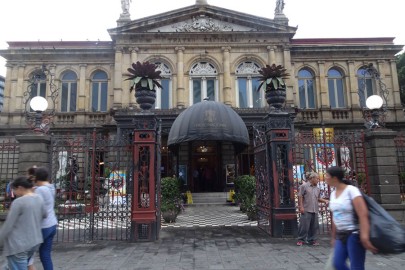 Outside the National Theatre

There’s a final flurry of activity to see the renowned Gold Museum which has a spectacular pre-Columbian gold collection, beautifully exhibited and excellent explanations of provenance and manufacture.  It’s in the centre of the old town, with tis beggars, drunks and druggies. Not a place to be after dark we are told. 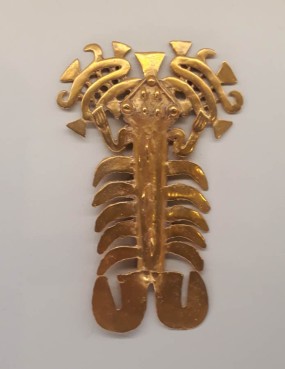 We dine in the hotel which boasts one of San Joe’s finest restaurants while sheltering from a massive thunderstorm; afterwards we drink Nicaraguan rum with the hotel mixers in Tim and Annie’s room and play one final game of Skip-Bo. We The final score is 10-3 to the girls. The boys are disbelieving of our ‘luck’ – skill we call it. We plan re-matches on another trip, another time! 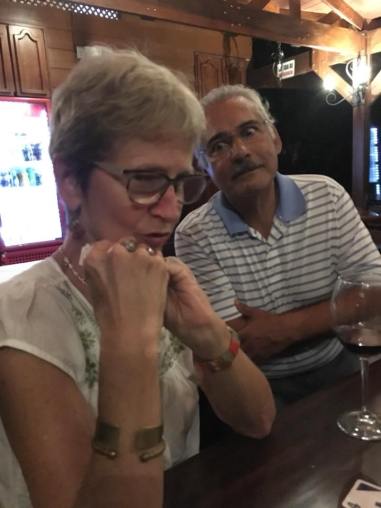 Diego trying to look at my cards – or in despair?

It’s been a fantastic couple of weeks exploring completely new countries. Thank you to our travelling companions. 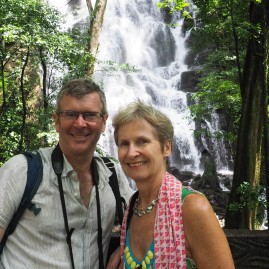 As ever, thanks also to Ross for supplying the best wildlife photos. Here is a link to his blog.