The drive from El Jaguar to Léon, Nicaragua’s capital (founded in  1524) until Managua took over, takes us through fields of maize, legumes (the famous red beans for the staple dish of pinto gallo – or rice and peas) and the usual motley array of horses (sometimes with dashing gauchos astride), cows, dogs and pigs. Round here where it is poor, they are all a bit thin, ribs sticking out, apart from the pigs who root around contentedly. Sometimes the animals are tethered, but mostly not. The houses are as poor as ever, with the occasional school, and people going about their daily business. Religion plays a huge part in daily life – and the bigger churches are full of effigies of saints and, of course, the Virgin Mary. 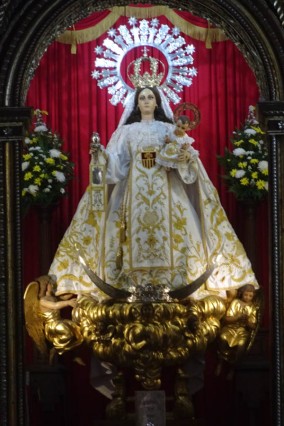 We stop off on the way at Esteli and visit a cigar factory. This region produces Nicaragua’s world-famous tobacco;  the cigars are said to rival Cuba’s finest. Named -bizarrely – Gurkha by its Indian owner, we are overwhelmed as we enter by the pungent smell of tobacco. The manager is puffing away at a small cheroot-style cigar, but the translator,  a local dealer, is enjoying a huge fat corona-sized one and says it his 5th of the day! We wonder if it effects the workers’ life expectancy: ‘Oh I don’t think so,’ he says breezily, and adds, ‘well, maybe a bit’.

It’s a smallish outfit with several rows of  people rolling, which is done in teams of two. The first person rolls the tobacco in the inner liner, and the second persons adds the wrapper, which is made for a variety of different leaves depending on the quality of the end-product. 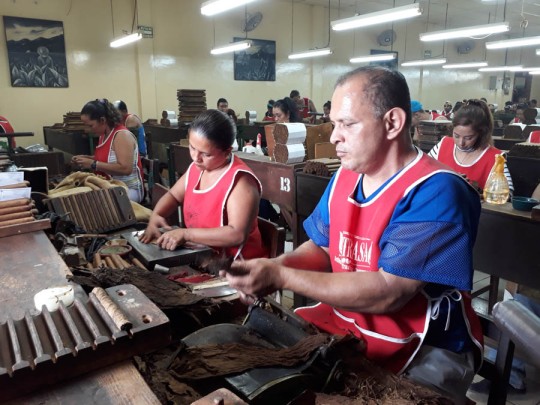 Then there is a sorting room, where they determine the different grades of tobacco; 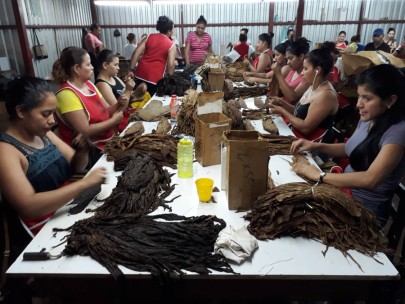 Sorting the grades of tobacco

Sorting the tobacco as it comes in from the farms

followed by a branding and packaging room, and of course a humidor store room where the cigars line the walls. Much of their output is made to order and branded for the purchaser. 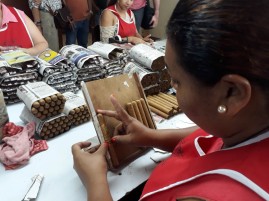 Putting the brand cigars in their boxes

Léon nestles in between various volcanic ranges and is dominated by Momotombo. Next stop on our way, is a a thermal hotspot with some bubbling geysers and we encounter our first tourists – a busload of cruise ship passengers. It’s a sorry place with people pestering you to sell ‘pre-Columbian’ whistles and pottery shards, and small children begging.

One of the little pests mooching around 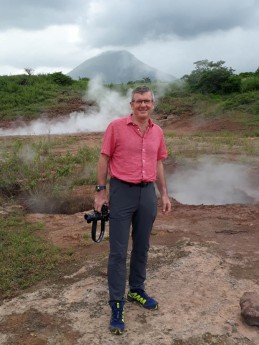 Then on to Léon itself, which is charming – all low-built colonial style houses, many brightly coloured, and whose skyline is dominated by the magnificent churches and cathedral. 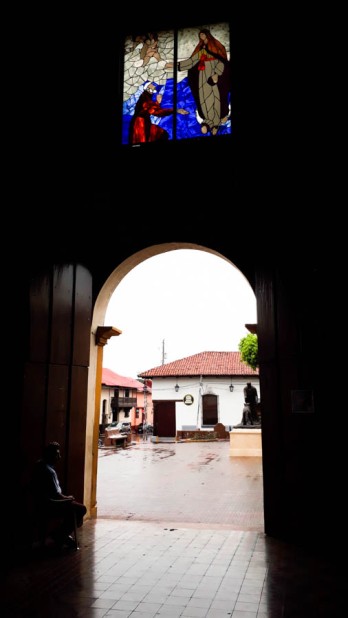 Looking out of the oldest church, La Recoleccion,(1746)st Church 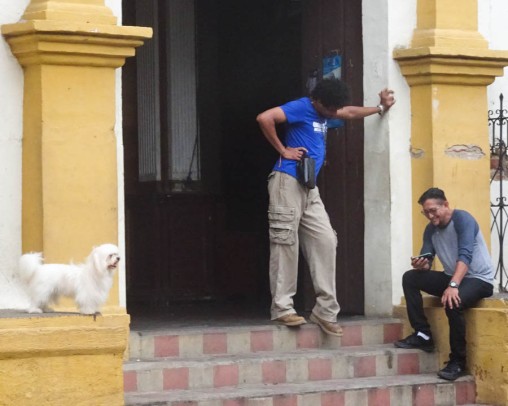 Hanging about the Church door

We are staying in the Hotel El Convento – a former nunnery set round a generous courtyard with an English-style formal knot garden in the centre. Its airy public spaces are decorated with religious ephemera from the old convent and local handcraft and furniture. Really delightful. 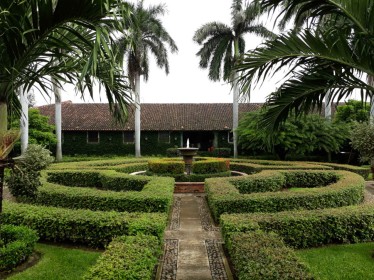 The formal garden at El Convento

One of the seating areas

A religious statue from the old convent

Léon is a place for wandering around – we visit the Museo Ortiz Guardian which has a marvellous collection of South American Art, as well as a family art collection including great Renaissance works from Italy and Spain, and a rather less exciting contemporary collection. Both are set round cool courtyards – this is the local style, a small street front leading back into at least one, if not two, courtyards and the living space is arranged around it. Here we see a gardener carefully cutting, with small shears, little squares in a camomile-type lawn so it resembles a chess board. So Japanese in its detail. 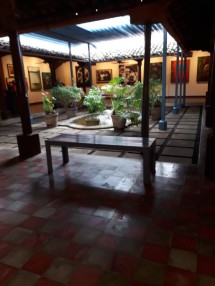 one of the courtyards in theOrtiz Guardian museum

The Cutural Centre in Leon

High fashion on the streets of Leon

My favourite painting by June Beer

The main square is buzzing with people – sitting, selling, chatting – and we watch the world go by in a local bar. The lions guarding the cathedral (after whom Léon is named, or is the other way round?) are said to come out after midnight to guard the city.

Ross and the Lion 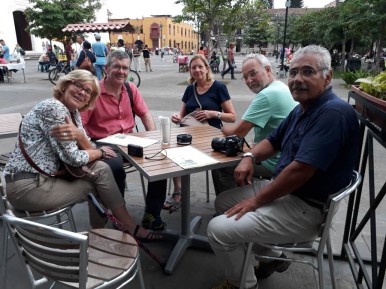 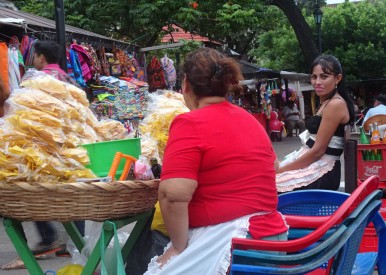 Vendors in the city square

Wandering the streets, we notice big Sandinista murals – and there are a number of beggars. Not many tourists here, only backpackers, so the pickings must be limited. Local hero Ruben Dario, poet and diplomat, is much in evidence, and his house is a monument to his life. 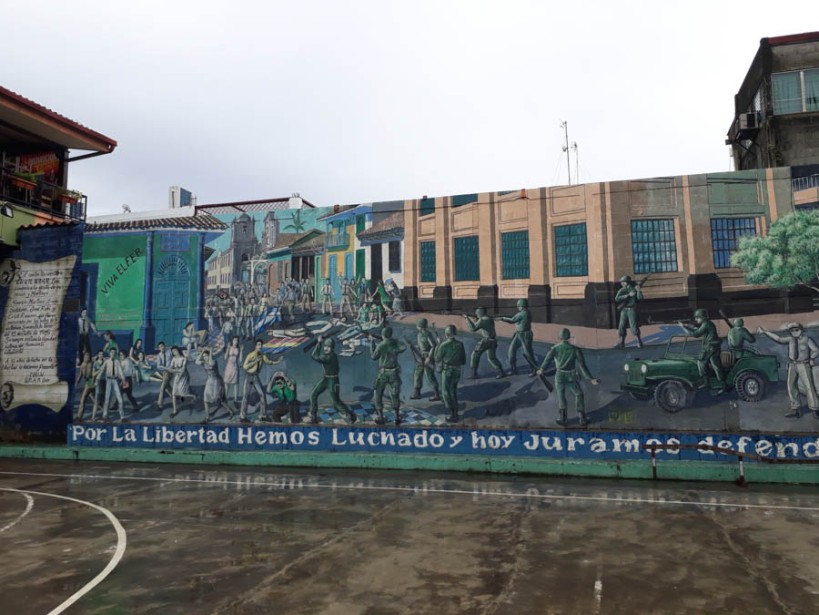 Murals/graffiti are big in Leon – and this is no exception. Most have revolutionary themes 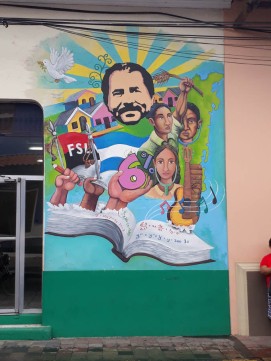 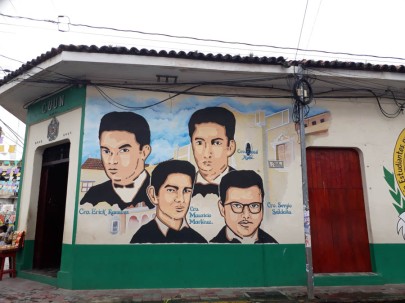 Ruben Dario – he was only 49 when he died

A day at the beach is always a must when the sea is within reach. A short ride takes us to Las Penitas, a favourite local resort. 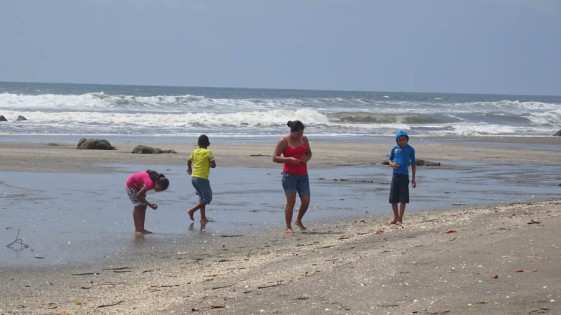 It’s out of season so there’s no one here apart from fisherman, a couple making out behind some rocks and kids fishing for crabs. As I photograph them, a boy starts pelting me with some he has just caught in the mud. The tide is out and dogs and vultures gather round God knows what; we walk to the where the sea is crashing furiously on the black beach, way out from the village.

Bayardo, our driver, takes us to an excellent local beach hotel where we devour freshly cooked sea bass, and admire the parrot: it’s the first time I’ve come across one who shouts ‘Hola’ and ‘Cocericoo’. 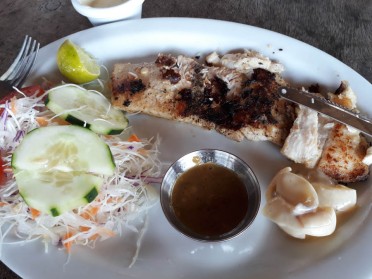 In the evening we have delicious cocktails at a Cuban bar and a rather good cheap dinner at Bodegan, the no 1 TripAdvisor recommendation. 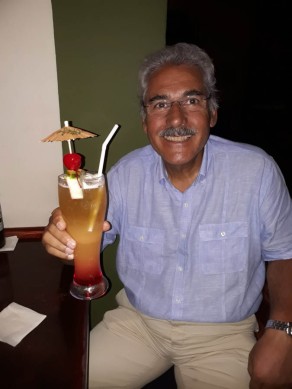 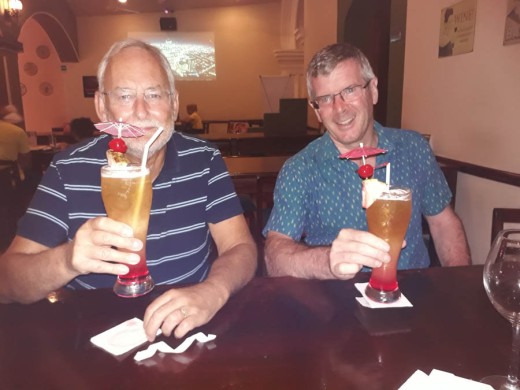 Off to Granada, considered to be Nicaragua’s most attractive town, with its horse-drawn carts, and grand Spanish-style houses, home to very rich. It reeks of old conservative money, indeed it supplied many of the Presidents of independent Nicaragua in the late 1800s. Despite its historic appearance Granada has been razed to the ground countless times – it was the most opulent trading port in the New World – by the French, Spanish, English and Americans. But behind all this prettiness it is changing fast – the main street has been pedestrianised and is populated with a long chain of ghastly restaurants and bars, with hapless waiters touting for business and hawkers harassing you even when you are seated. 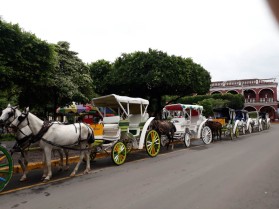 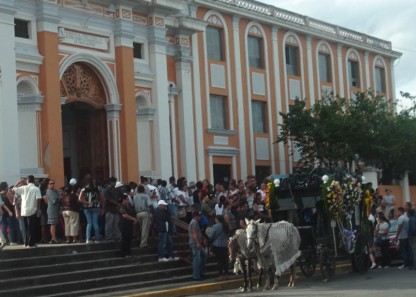 The team having a morning coffee

We arrive in the pouring rain, and are whisked off to our Les Isletas tour. These are a group of 365 ‘islands’ or volcanic rocks spewed from the now dormant but domineering Mombacho volcano. Granada, like much of Nicaragua, is surrounded by volcanoes, several of them active.The next evening we visit Masaya, which is the only lava lake in South America and is truly spectacular

murky weather for a boat ride

Tim is wrapped up against the rain 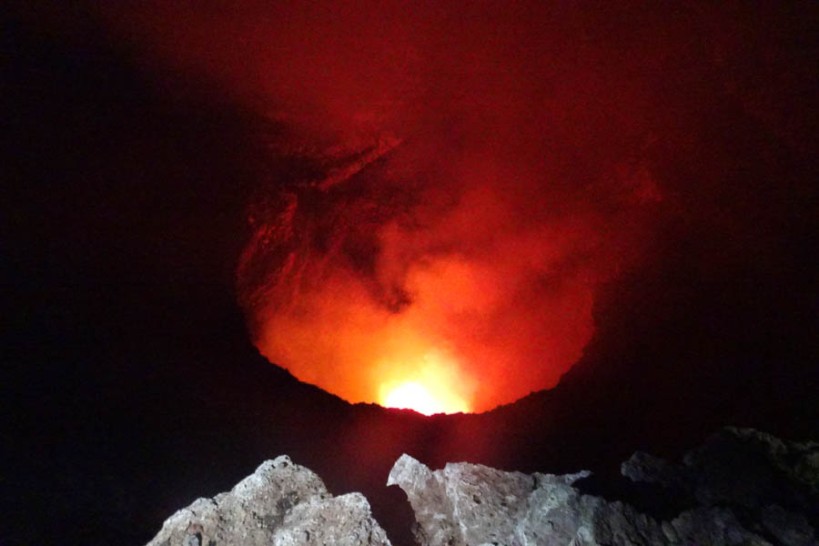 The lava lake at Masaya

Most of these islands have large houses built on them, on land stolen by rich Nicaraguans from the local fishermen. Several of these are now foreign-owned and change hands for millions of dollars, sums unimaginable to most Nicaraguans. Even in the gusting rain, the islands are pretty, and we meet some of the local residents –  spider and capuchin monkeys.

We are staying in a charming hotel, the Patio del Malinche, away from the main thoroughfare, old style, set around a pretty garden courtyard. After some appalling cocktails we manage to find a really decent fish restaurant on the first night,  El Marlin. The second night we sought out the NYT recommendation El Zaguan for some great cocktails and proper Nica-style steaks.

Granada is famous for its churches, and there are marvellous views of the town from the bell tower of Le Merced. We also enjoyed visiting the now-defunct railway station, recently turned into a technical college where young people learn hotel skills, such as making cocktails and doing the laundry, both of which we saw in action. President Violeta Chamorra shut down the railways in 1993 as the post-Sandinista economy could not sustain them. 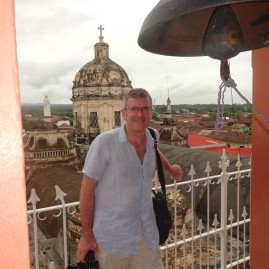 One of the old engines

Learning how to waitress

The Granada region is also famous for its pottery. It is made according to ancient pre-Columbian traditions as we learned in a ‘factory’ in San Juan de Orient. After throwing the pots, glazing and deep etching  traditional (and now not so traditional) designs with a sharpened bicycle spoke, they are finally baked at very high temperatures. The results are strikingly attractive, and the colours subtle due to the natural pigments for the volcanic rocks that they use. 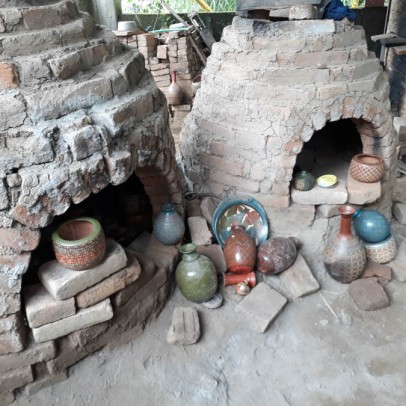 The potter who loved football

The lady on the loo gets everywhere in Nicaragua 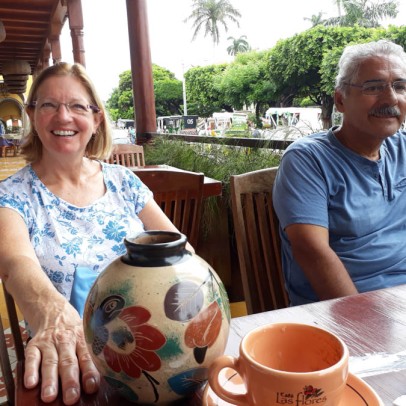 Annie with her purchase

On the way back to Granada we stop at a renowned meridor, or look-out, for the view over the lake and volcanoes, and lunch. The latter poisoned us (still feeling the after-effects) but we are fascinated to come across a mobile medical unit, complete with doctor and several nurses. In a poor country this is an excellent way to get health-care to the people. Christine engages the young doc in conversation and he is enthusiastic and altruistic. The Sandinista heritage has long arms. 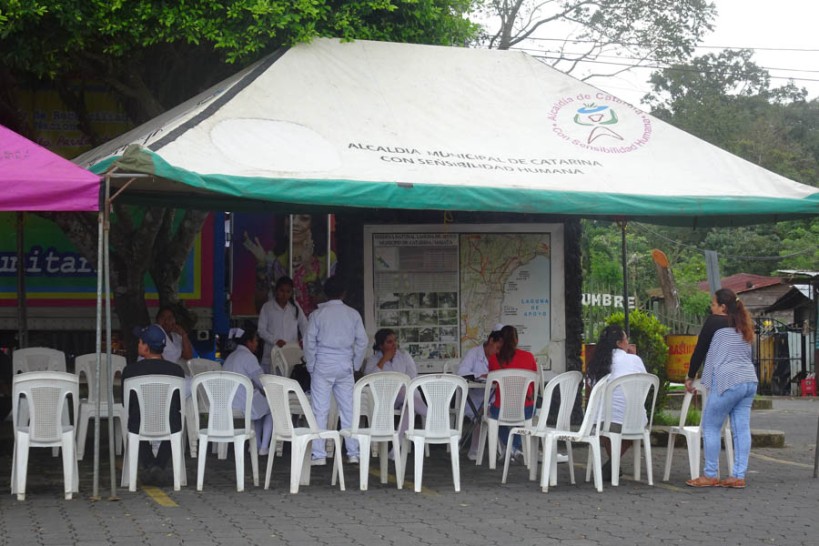 We would have liked to stay longer in Granada, once we worked to how to avoid the main back-packer and tourist areas, but we had to move on…Some of our party preferred it to Léon, but for me, Léon retains more charm. It is less spoiled by the mad rush to commercialisation which will overtake Nicaragua as people begin to realise it is perfectly safe and less touristy  than its neighbouring countries. Our time there was all too short.

View over Lake Nicaragua from the horrible meridor. The main volcano is Momotombito (left)