Yes, here I am in Bandra, overlooking the homes to the stars. Shah Rukh Khan – ‘the world’s biggest movie star’, according to the LA Times – has a house just below me, Sachin Tendulkar is to the right, and just there is young John Abraham’s swanky revamped ‘bungalow’ as they call houses here, facing on to the Bandra Bandstand and ‘Walk of the Stars’. We even saw a film in action -m see photo gallery!

But the real Bollywood star is Chorti Billi Chomal of Bombay – my hostess Cindy’s rescued street kitty who is as bewitching and beguiling as any Indian actress. As Cindy says ‘She is the story of how a little bit of love and affection can make a huge difference.’ 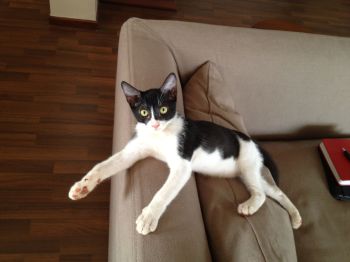 Cindy is animal-mad and she has a pack of regular stray dogs we feed on Bandra beach. 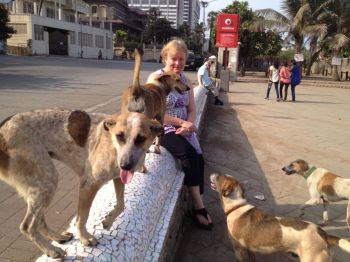 Cindy with her street gang

This solo trip has been a bit of a cheat, as I have been staying in a gorgeous –internally anyway as the exterior is swathed in bamboo scaffolding precariously erected by men with no harnesses before our very eyes – Bandra apartment with sea views, thanks to Cindy and Guy who have moved here for three years.

Having a driver here is compulsory, so Cindy and I have been whizzing round, visiting the sights – South Mumbai and the Gateway to India, the Taj Hotel where the bombers massacred so many people; Leopold’s café of Shantaram fame, Chowpatty beach, Chor Bazaar (Thieves Market) with its hotch potch of looted temple antiques, knick knacks and fine furniture and, of course, the shops to stock up on kurtas and, in a fit of impending domesticity, some table mats, napkins and dishcloths for our new Singapore apartment!

Cindy at the Gateway to India 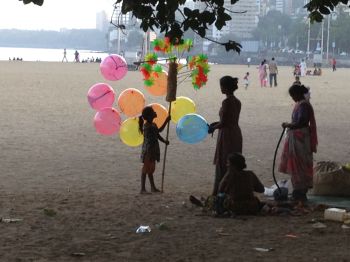 old houses in the Chor Bazaar 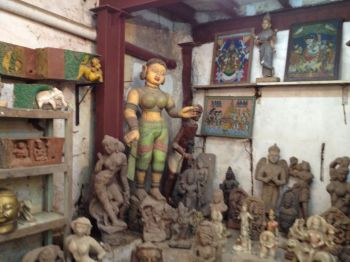 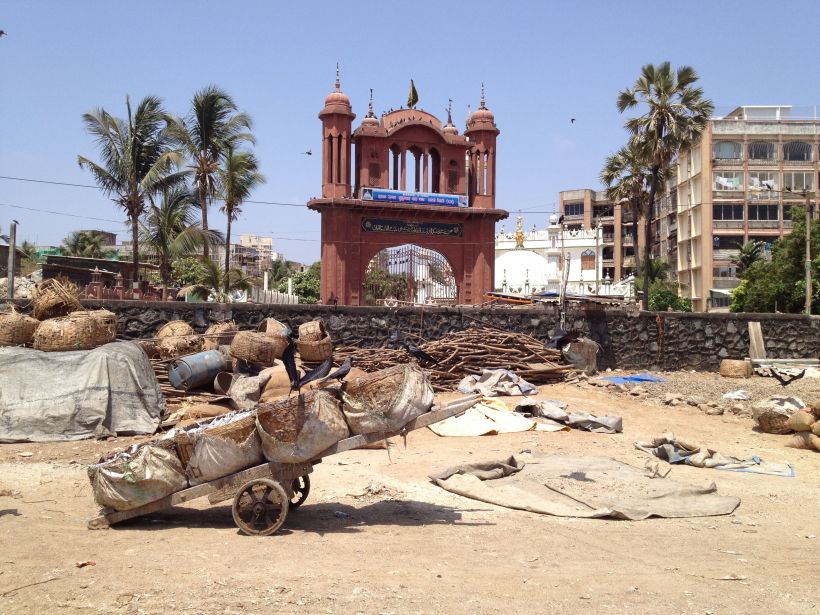 the shrine we were ejected from, brined fish in foreground, what a pong

The highlight of my excursions (apart from the visit to Dharavi slum which is the subject of the next blog) was a visit to Versova beach and its Koli fishing community. Waiting for Cindy, who had an appointment, and with a couple of hours to kill, Metab took me, first, to an Islamic shrine, where we were expelled, amusingly, for him entering a women-only area! Ironic really – and he is a Muslim!

Then we happened upon some women sorting and flaying brined fish, ready for drying. They need the fish during the monsoon when no fishing is possible. The smell of the rotten fish was quite overpowering, yet these women seemed immune, as did their children. Welcoming smiles, but the pretty girls were abashed at being photographed.

Next stop Versova port itself, accessed through winding alleys, which we would never had found without the help of the local bobby. Charming and helpful, he observed to Metab that not all policemen in India deserve their terrible reputation. I have to agree in this case; at first he even refused the 100 rupee tip I slipped into his had as we left. 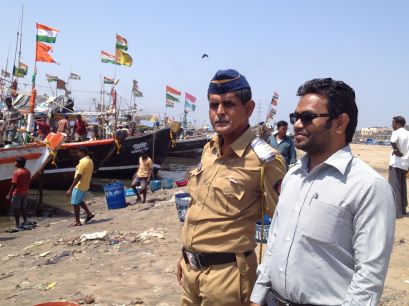 Metab with the friendly policeman

We were lucky: the larger fishing vessels, which travel for 3-4 days into richer waters, had just returned to port. Skinny, strong men were carrying plastic buckets overflowing with fish, several varieties of prawns, squid and crabs off the boats and up the beach where they were transferred into waiting lorries. Not a block of ice in sight – and again the stench of the fish in the midday sun, combining with rank sewage and general beach detritus was overwhelming. Not sure I would rush to eat seafood in Mumbai…nor papadoms after I saw how they are made in the slums, but more of that in the next blog….

on the beach – no swimming!

empty fish containers being returned to the boats

shrimps,fish, squid – you name it…

Mumbai memorial at the Taj

Cindy with her bearer!

Tthree into an auto rickshaw DO go

extras – or starlets? – on set

extras on the film set

beggars in wheelchairs unfazed by the traffic

This prostitute turned away when she saw us

newly made clothes being washed before being sold