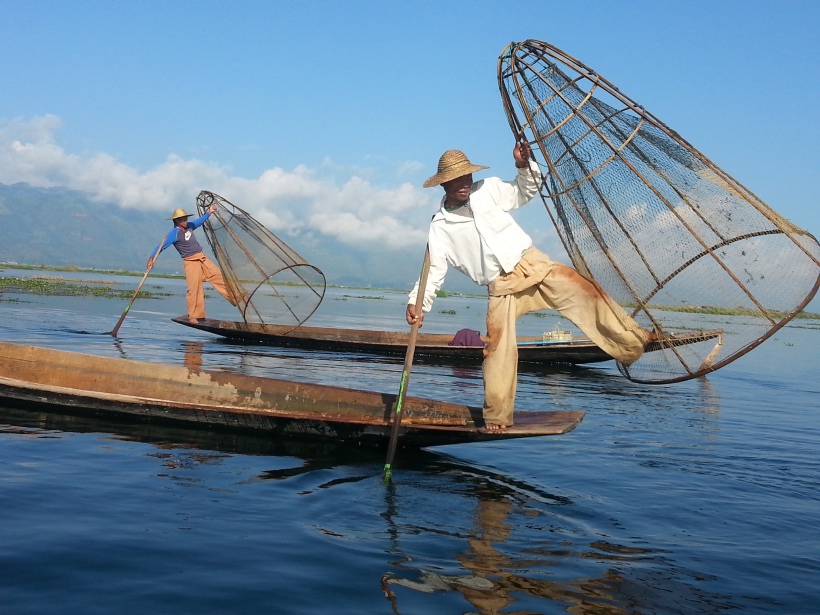 Inle Lake is home to the unique one-legged rowers and a tourist destination like Bagan. It’s a peaceful sight, watching the fishermen cast their nets deftly, one leg wrapped round a pole. The water is calm, the air fresh but broken by the sound of the two stroke engines in full throttle as boat loads of people speed up and down – monks and school children, ladies sporting umbrellas to keep the sun off, vendors carrying their tomatoes and other crops to market and, of course, the ubiquitous tourists. Strangely we see similar birds that are common to Southern Africa, like fork-tailed drongos and squacco herons!

Hilary shading herself like a local – from a passing shower! 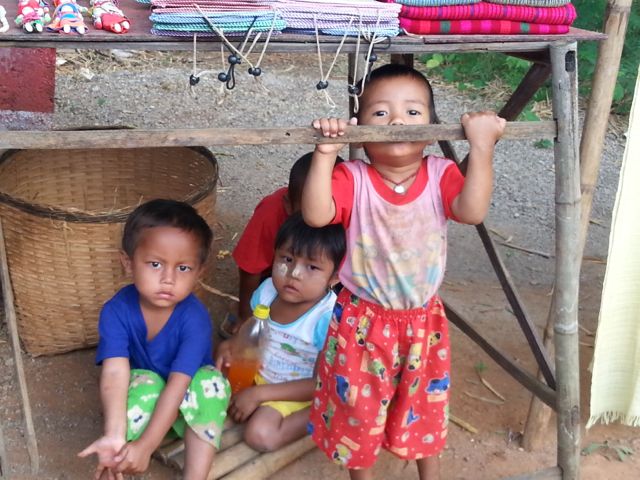 The villages are all built on stilts over the water – as is our hotel room, which looks out over the lake and from where we get marvellous sunsets. There is no running water in the villages and loos are long drops straight into the lake – only the children seem to swim! Cultivation is done on vast floating islands – all manner of vegetables, lotus for weaving, tobacco for cigars – and we see teams of men cutting and pushing tracts of greenery around, rather to our amazement.

Setting off on our travels 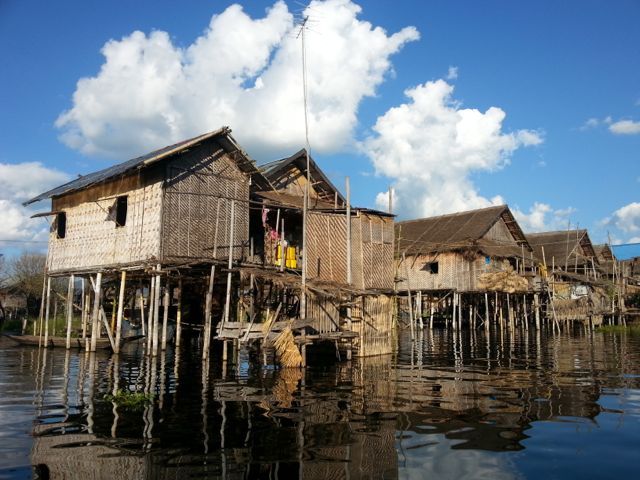 As in Bagan we seem to be on a set trail, which is disappointing but partly our fault as we insist on going to the five-day market, which shifts from village to village. The day we go it is in Inthein, one of the larger settlements, and home to the Nyuang Ok and the Shwe Inthein pagodas, which have thousands of stupas, some old and crumbling, overgrown with weeds, but others still being built and decorated in gold leaf. It is an astonishing sight, this hugger-mugger collection of spires and domes, erupting out of the hillside. There is a wonderful view of the lake from up here.

The market itself is full of things for us tourists to buy – but all beautifully made – Shan trousers, scarves, children’s clothes, bags and other weaving, Myanmar smoked green tea and local chillies. Best of all are the Pa-O ‘ethnics’, the ladies all in black with orange and red-checked headscarves, betel-red stained lips and peg-like teeth, all revealed in their wide and welcoming smiles.

As a result we fall into the inevitable trap of visiting local ‘industries’ – we see paper-making from mulberry pulp; weaving from lotus fibre – amazingly expensive with scarves starting at $90 and jackets retailing at $550 –ladies rolling cheroots and the rather sad sight of the Padaung people – the women with long necks encircled in brass bands. Now a tourist attraction in their own right, on view in handcraft workshops, and mostly Christian, they have migrated to Inle as a result of persecution by the Bamar-dominated Yangon government. 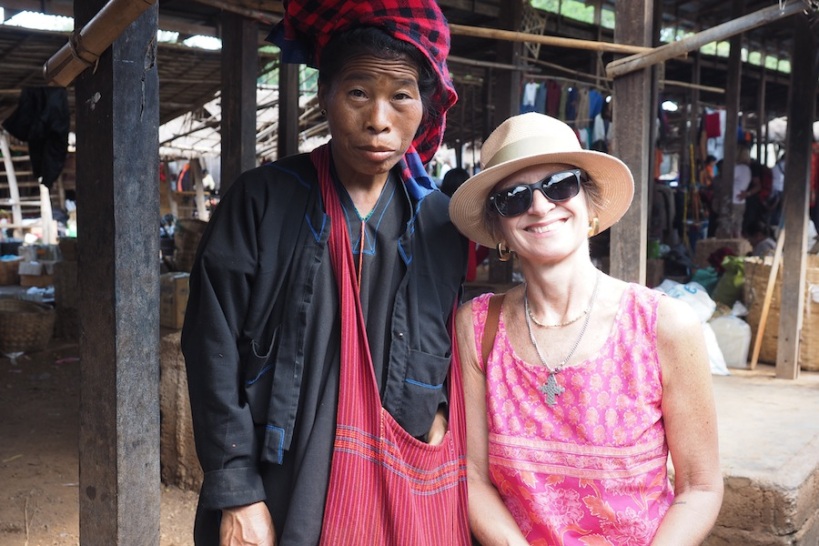 Posing with a local lady – she demanded a dollar after! Note her locally woven bag…we bought one 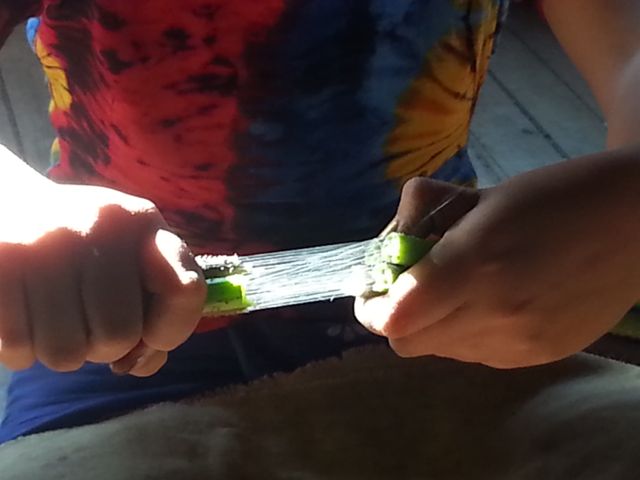 The lotus fibre that is used for weaving 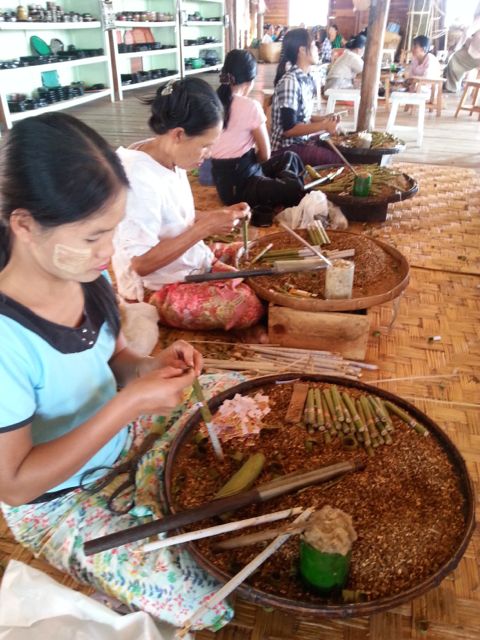 Had we been a bit smarter we could have avoided the crowds by insisting that we made a 3-hour trip to another part of the lake where no one goes…as it was I was denied the chance to see a new centre for breeding Burmese cats by my fellow-cat-hating travellers (humph).

Looking for a bargain…

A couple of nights suffices here, and soon we are back at Heho airport, where our flight is delayed as the Vice President is expected – hordes of brightly-dressed and beautiful girls are on hand to greet him, boys with musical instruments are twanging away on the landing strip. 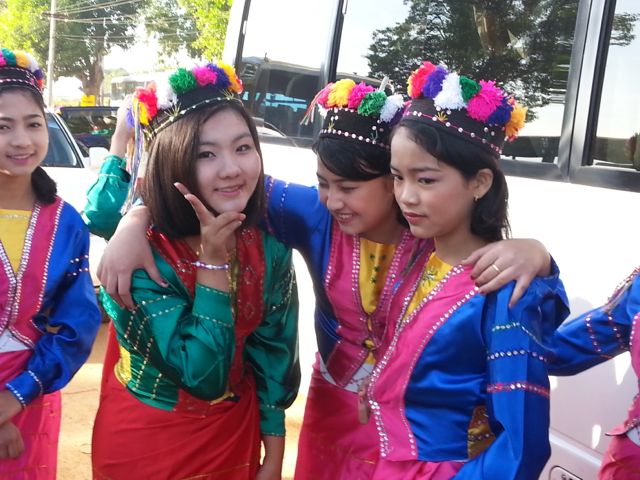 The welcoming committee at Heho airport

Here we say good-bye to gorgeous Ghi Ghi, but not before giving her a couple of pronunciation lessons – the ‘hotar’ finally becomes hotel and ‘peepar’, people. It is very hard for Burmese to speak English, and because British and American tourists avoided the country during Ne Win’s rule, while the Italians and French did not, English is rarely spoken.

Exhausted by the pace of our travels, we climb on board and head off for the beach.

Another angle showing the nets they drop dwon

Inle Lake: The team assembling in the hotel

Ross at the ready

This is how a real man-bag looks!

Jane and I buying fans

The fan i bought!