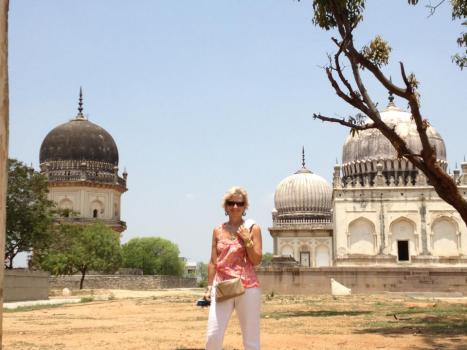 Indiaaah! Here we are again! Arriving late at night, whisked to Westin Mindspace Hotel – it is after all in Hitex City, Silicon Valley of the east, Gateway to the North/South depending where you are from, or just plain Cyberabad – along a toll road and with NO traffic! 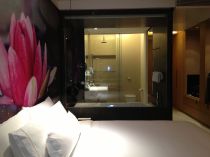 Second good news is fab hotel with see-through bathroom and comfiest bed ever slept in. Zzzzzz

After delicious brekkkie of dhosa masala – death for la bella figura but unmissable – we decided to go the whole hog and get a guide and a driver for the day. Enter Mr Kumar! Small and skinny, with a luxurious moustache, he gave us all the important facts on Hyderabad as we negotiated our way out of Jubilee Hills, the Beverley Hills of India. 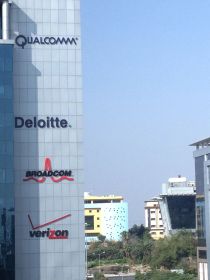 In a nutshell, Hyderabad and Bangalore (our last stop in India, not my favourite place, see previous blog) vie for 5th largest city (8m people) and hi-tech accolades. Hyderabad might just win being Microsoft’s largest centre outside the USA and hosting major firms such as Facebook, Novartis, Accenture, Amazon, IBM, Verizon, etc etc. It is also much more pleasantly laid out and not quite so huggermugger as Bangalore.

What attracted us is its history – partly gleaned from William Dalrymple’s White Moguls – which goes back to at least 11th century, with the old capital Golconda (see below), source of the Koh-i-Noor diamond. The new capital transferred to Hyderabad in 1591 with the building of the 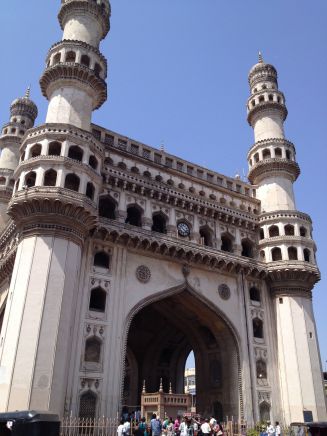 Charminar by Mohammed Quli Qutb Shah…and our first stop.  Extraordinary building in middle of bustling square which, by midday on the Saturday we were there, was chockablock. Being the Muslim centre, burkas in abundance. Fabulous views from the top. Having been a Muslim-ruled centre under the Nizams until Partition, Hyderabad still boasts a Muslim population of 35% vs Hindus with 50%. 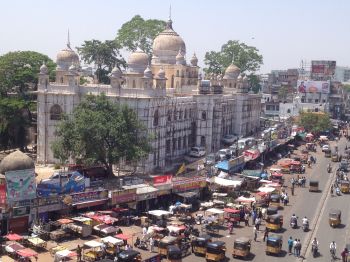 ‘Oh yes, India is a secular country, no problems,’ opines Mr Kumar. But later, when he feels at ease with us and we talk politics, as all Indian love to do, he gets very excited. ‘There is too much democracy in this country. We are too nice to the minorities. Hindus only have 2 children in the family and Muslims have 10! They are killing us for no reason. We Hindus are peaceful people.  Pakistan is influencing them. Look what happened there where the innocent Indian man [bomber] was killed in prison. Here we spend crores [a crore = 10 million] of Rupees on arresting the Bombay bombers and we hang them. Legally! In Boston they just shoot them!’

The mildest of men, once he got going, he was unstoppable. A BJP supporter and avid Hyderabad separatist – the BJP has undertaken to make Hyderabad into a separate state should they get in in 2014: ‘The problem is the politicians, they are not interested in doing things outside their own constituency. So there is no progress. We hate Congress, only one family ruling in India since 1947 [with one small break in 1989], all Brahmins, only 15% of the population. Caste is a big problem and getting worse. When Dalits come into power they still have no social position or respect. Even if they have money.’ 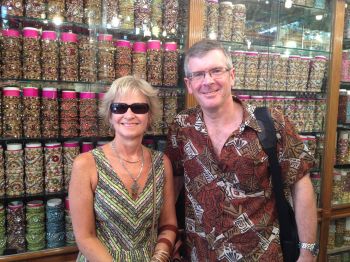 Then on foot to the Chowmohalla Palace via the Laad Bazaar, or bridal bangle market, with everything the Indian bride could need for her wedding. Gold, glitter, glass galore.

Elegant buildings are set around courtyards with fascinating museums reflecting the life and times of the Nizams of Hyderabad, including a 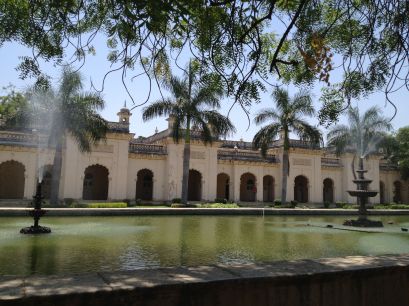 pillared Durbar room with enormous chandeliers, and a collection of marvellous vintage cars and motorbikes. 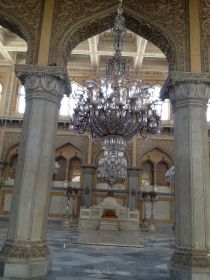 Before the heat (40C) dissolved us completely, we managed to locate two tiny and unsung attractions – the Badshahi Ashurkhan, a Sufi shrine with mosaics from 1595, but sadly unloved and uncared for, as was the Purani Haveli, now in the grounds of a girls’ school, the Silver Jubilee museum of the 6th Nizam created to show off all his gifts – silver of course – and which houses the largest walk-in wardrobe in the world at 73 sq m! Can you believe he wore new clothes every day of his life, and gave all his used clothes to the poor? 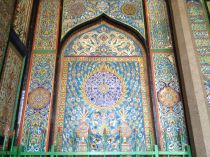 Hyderabad is the home of biryani so to sample this we went to Paradise, a four-story food court buzzing with families on a Saturday night. We were sprayed by a fine mist throughout our meal – we were sitting outside – but our dinner (R 1050) cost less that 2 glasses of post-prandial wine at the hotel! 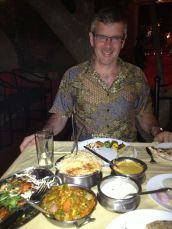 Tandoori kebabs and biryani at the Paradise

The next day and Mr Kumar escorts us to Golconda Fort, along with a very detailed description if its history. I got confused so you can look it up. The current structure was built by the first of the Qutb dynasty, starting in 1518, on the site of an ancient mud brick fort. It reminded us of Great Zimbabwe, an impressive structure, set over an area of 40 sq km, built of hand-hewn granite blocks, slotted together with no mortar. Here we have grand halls of justice, zenanas, royal audience halls, all linked by steep steps, which we toiled up in 40C. The views of Beverley Hills and Hyderabad in the distance were stunning and worth it. Practically the only tourists there, the place was nevertheless teeming with Indian visitors, picnicking, playing badminton in the sacred portals, and leaving offerings at the various shrines.  Also asking us to pose for photos with them! Never have I been in such demand…. 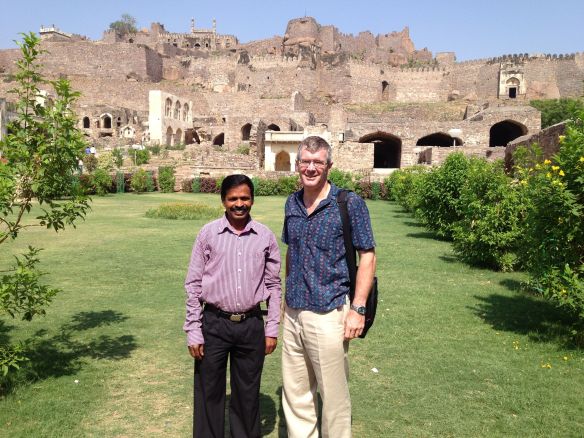 Ross and Mr Kumar at Golconda 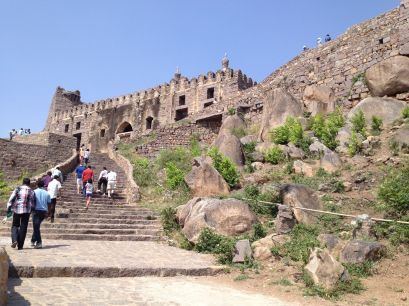 The staircase up to the Fort 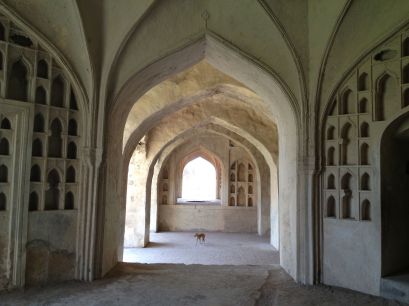 From there to the Qutb Shahi tombs, the only necropolis in the world where all members of a single dynasty are buried, comprising 7 tombs of the Kings and numerous hangers-on, including the founding female, Queen Hayat Baksh Begum, and Quli Qutb’s wife, after 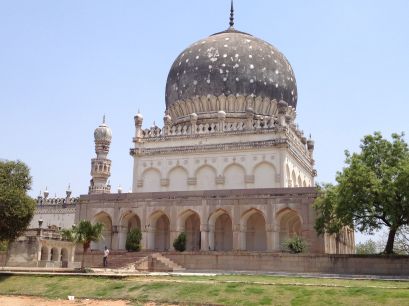 whom the city of Hyderbad is named, and who was daughter, wife and mother to three of the generations of rulers. Based on Isfahan, the tombs incorporate onion domes, Persian and Indian motifs: they were decorated with majolica ties and precious stones, all now looted, but the ornate plasterwork remains and the granite will last for infinty. 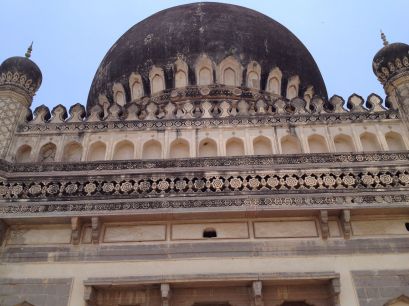 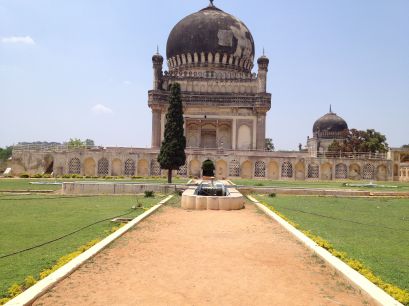 Again, a spectacular sight, Quli Qutb’s tomb being likened to the Taj Mahal of Hyderabad, but like all Indian monuments covered in litter and badly maintained. No hope of UNESCO status till they sort this out, I’m sure. Mr Kumar says the problem is that Central government allocates funds but these are outsourced and huge cuts are taken along the way so the resulting money spent is pitiful. In his wise words, ‘Politics and bureaucracy are the problem of India.’ 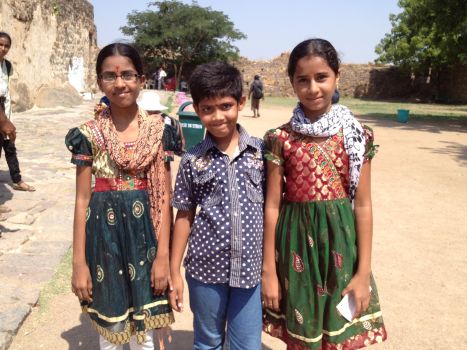 Tomb of the first King, who built Golconda

The royal way down – the kings were carried in palanquins

Detail of plasterwork at Golconda Fort

Taken for the luscious plait!

Most ladies wear burkas in the Muslim quarter

Saturday hustle and bustle by the Charminar, centre of old Hyderabad

In the Laad Bazaar

The guest quarters at Chowmahalla Palace

40 C in the shade at Chowmahalla Palace

Outside the armoury at Chowmahalla Palace. The iron chests are British

Outside the Durbar hall at the Chowmahalla Palace