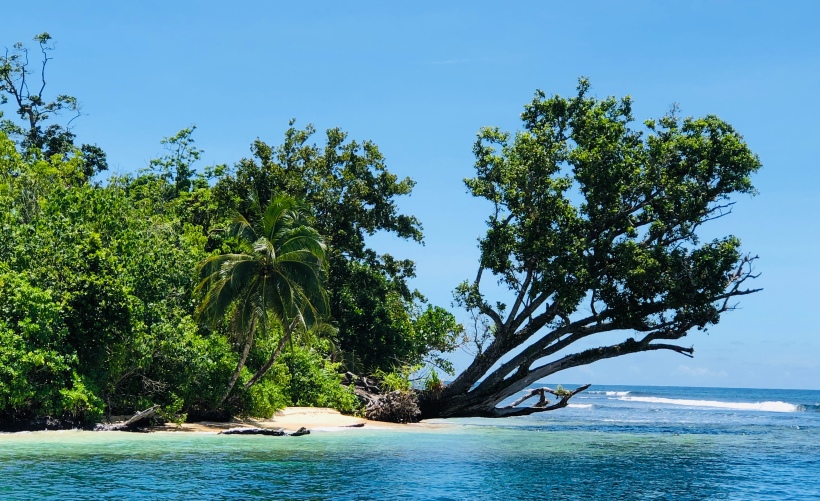 The next stage of our trip takes us to the Solomon Islands for a 14-day dive adventure aboard the MV Bilikiki. This has been a long-time ambition of ours and the trip was carefully planned around these dates and Christmas in NZ; for dive boats such as this you have to book a year in advance. 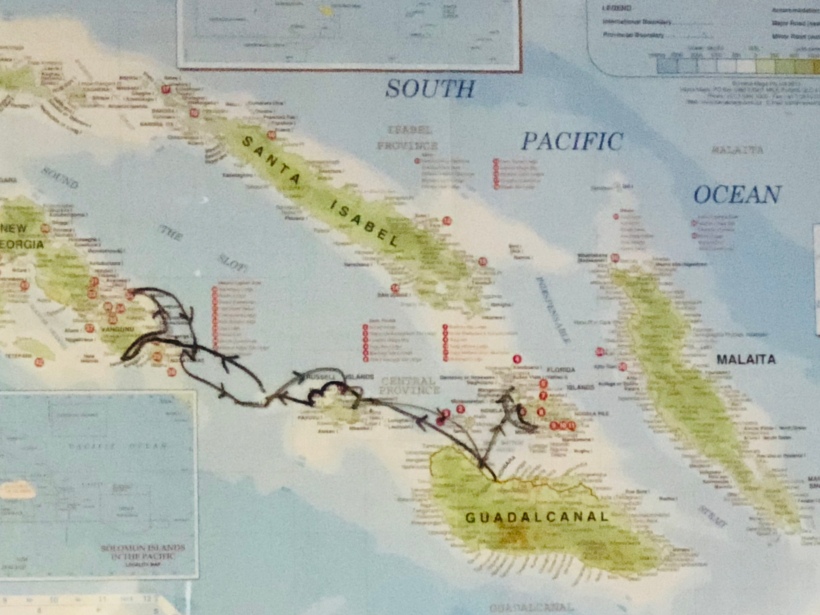 The Solomons played a critical part in WW2. The ongoing Guadalcanal campaign in 1942/3 for a strategic airstrip on an island that nobody wanted proved to be disastrous for both sides in terms of loss of ships – 67 in all – and life, 24,000 of whom one third died from starvation and disease. In addition Japan lost 800 planes and 2400 pilots and aircrew. The Americans ‘won’ in the end when the Japanese retreated: the wrecks of this campaign lie in Iron Bottom Sound, most too deep to dive; later we explore two Japanese supply ships in the shallows, Hirokana Maru and Kinugagwa Maru, both bombed by the Americans with heavy loss of life.

We arrive in Brisbane to a smoky haze from the terrible bush fires ravaging Australia and after a comfy night in the airport Pullman, where we leave a bag, we board our Solomon Air flight to Honiara. Even on the plane the lazy pace of island life is apparent with no rush to board or disembark, a total antithesis to our western obsession with being first in line.

The Bilikiki is an old coastal vessel converted some 25 years ago. It’s comfortable but not luxurious: the cabins have a strange double bed with an upstairs bunk – my side crammed in against the wall – but at least a private bathroom. Likewise the food is plentiful, tasty and fresh and but not haute cuisine. 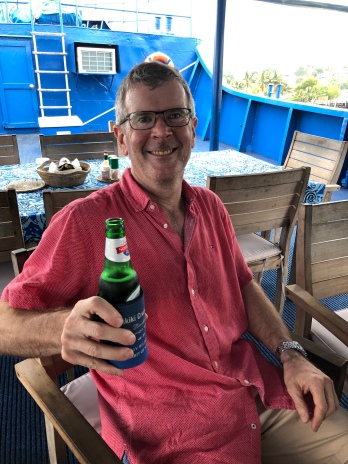 Another day another beer

The company is 100% American apart from us, a jolly bunch of diving pals – the Santa Cruz crew who have thousands of dives between them, ‘after 3000, I stopped counting’ – plus the New York attorneys, an eye surgeon and a film producer. To our relief all appear to be liberally-minded Democrats bar one – there is always one! Our cruise directors are a delightful couple, Pato and Fernando from Barcelona and Sao Paulo respectively, and the crew all Solomon Islanders – shy and quiet but great fishermen who catch wahu and tuna off the back of the boat.

We chug out of port in a grey drizzle. We know the rainy season is close, and we are in the topics so expect a fair amount of rain on the trip (and we get it). It doesn’t detract from the beauty of our setting, low emerald-green palm-studded islands, some with sizeable volcanic hills wreathed in clouds, with the occasional village. The jungle is so dense you can hear but not see the birds. When the sun comes out the lagoons are azure blue and the sea a deeper indigo.

The plan is to island hop, diving en route. The boat will either anchor or hover while we gear up, have our dive briefing and then jump into the two ‘tinnies’, flat-bottomed metal boats, that ferry us to the drop-off points. There are FIVE scheduled 60-min plus dives per day; I’m strictly a three-a-day girl, so it leaves time to read on the sun deck, do some yoga, write and generally get my breath back! Ross is more adventurous mostly doing at least four. The first couple of days my poor old feet give me some grief as finning uses muscles I don’t have but the plentiful supply of bananas does the trick! 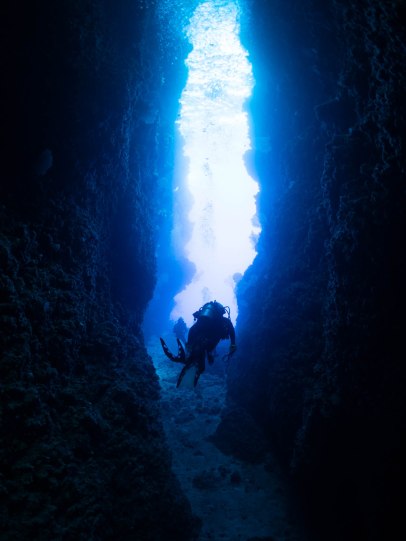 We get a taste for island life with the revictualling of the boat on the second evening. Canoes appear laden with fruit and vegetables – papayas as large as cannonballs, spiky pineapples, big sheafs of spinach, great orange pumpkins, sweet and Irish potatoes, cassava, tiny red tomatoes, spring onions – paddled by mothers and children, several with peroxide blonde hair as a result of a recessive gene and smiling giggling girls. All pile up their produce in the tinnies and the market begins. Fernando has a money pouch and buys from almost every person, spreading the wealth. 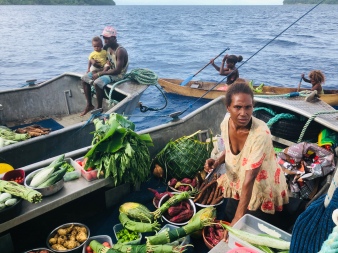 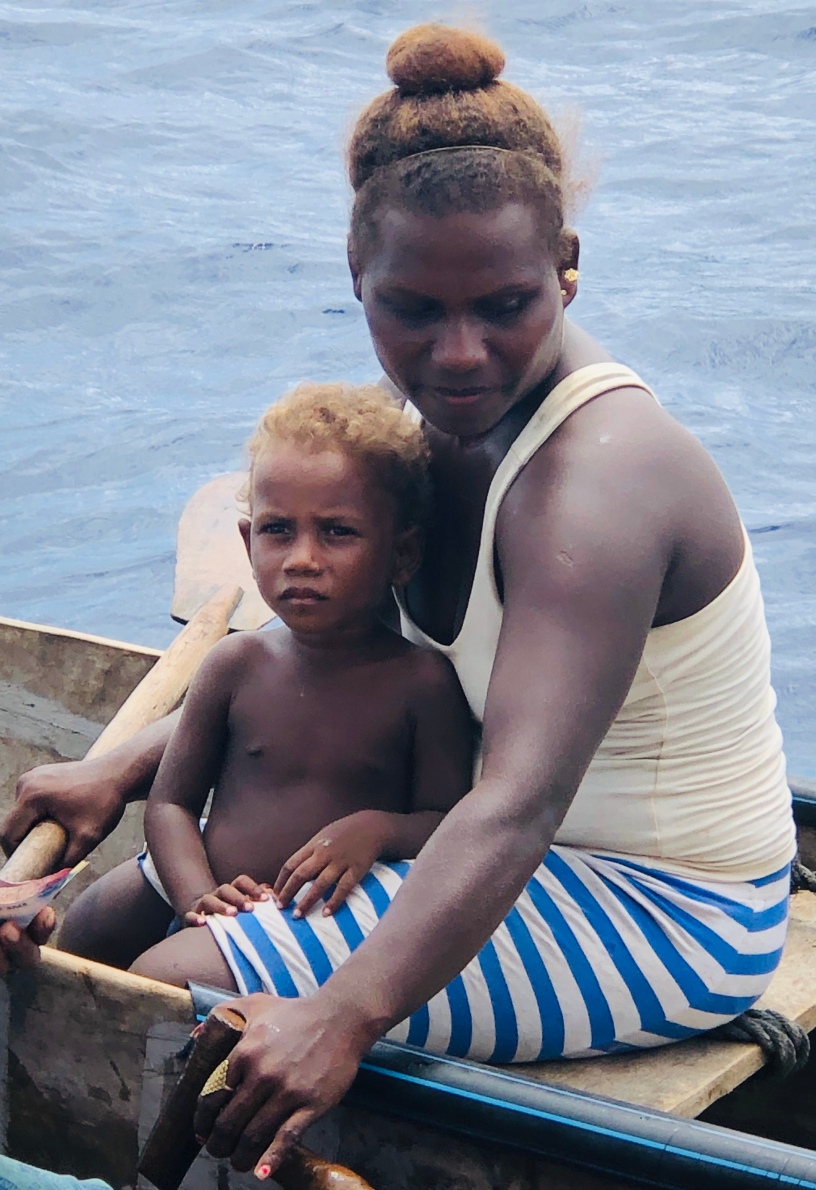 Apparently the Bilikiki gave the locals seeds years ago to set up this symbiotic cottage industry. Margaret the chief’s wife, a huge woman in a dirty tee-shirt, calls the shots: ‘you buy dispela’ she shouts at Fernando, who says ‘You get up then’, ‘I no stand’ she replies, but in the end raises her mountainous shape and shouts ‘I lub yu’ baring her betel-stained teeth, to much general amusement. Pato has brought batteries and hair-bands for the women, which she also dispenses fairly. 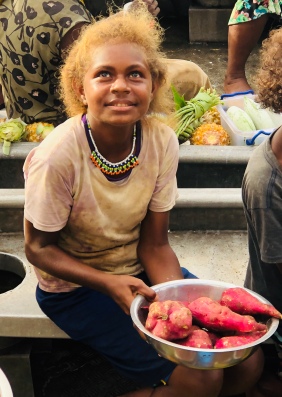 The next day we visit the first of four carving markets, another way we rich tourists can contribute to the local economy. I was sceptical about the quality potential but impressed by the skill and aesthetics of the objects for sale, ranging from carved sago nuts to huge bowls and tables inlaid with nautilus shells in intricate designs. There are some complicated spirit boards, with swirling octopus tentacles, and useful items like salad servers, in shape of squid and fish. Despite agreeing we need nothing we end up buying something in all four, mainly to give away. Fernando is on hand to pay our debts in the knowledge that we all underestimate our expenditure – despite the ‘Christmas prices’ on offer. 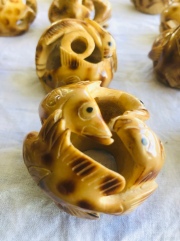 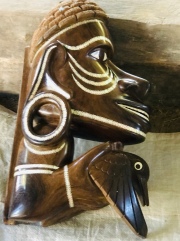 In each village I make a beeline for the women and children. I try out my Tok Pisin (Pidgin English) on them, it is immediately recognised as ‘PNG’ and causes much amusement – a real icebreaker. In one village, I make a new Facebook friend, a teenage girl who speaks quite good English, as do some of the women and men. 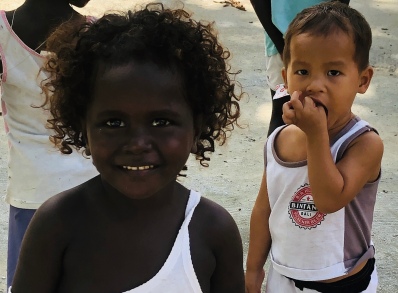 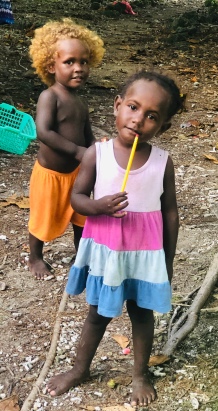 The kids are all gorgeous, some pale, others dark, some blonde, some straight-haired, others curly, some frizzy. Many snotty noses and tattered clothes, but all laughing and playing tag, hopscotch and other childish games. They love seeing their pictures on the iPhone, and some of our ladies have brought polaroids so they can leave pictures, as well as supplies for the schools, needles and cottons for the women, more hair bands and cast-off clothes. Others have brought chisels and caps to trade with – but amusingly some of the former are rejected as not being ‘Swiss’ or for beginners! 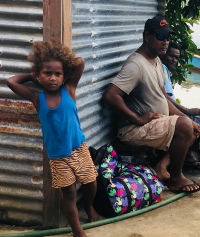 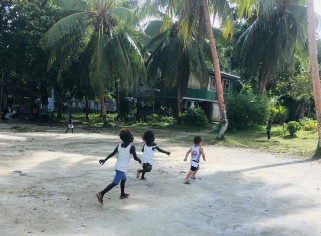 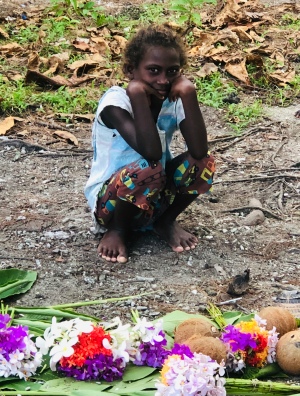 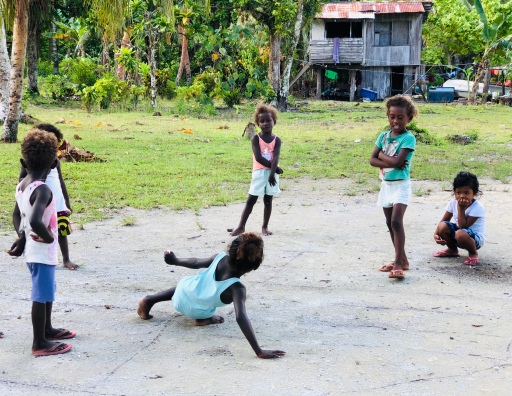 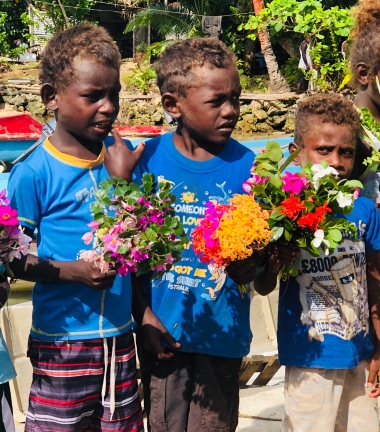 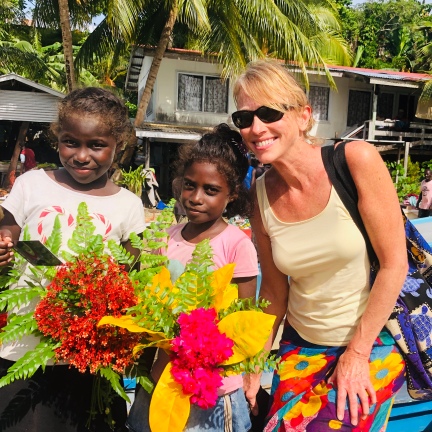 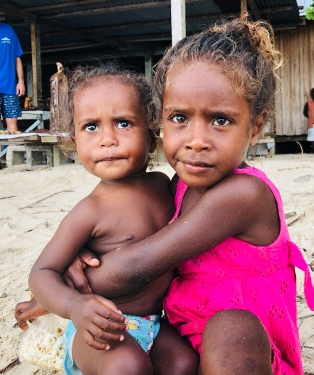 The villages are well-kept, though poor, most of the houses are on stilts, some have wells, others catch rainwater in tanks, and there are a scattering of solar panels, no electricity. Fishing boats are tied up in the bays. Chickens and dogs scratch around, in some there is a school, in all there are churches, predominantly Seventh Day Adventist.

An old water tank where all the women gathered 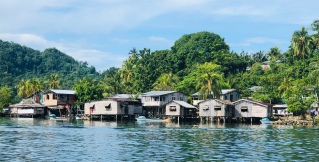 Our final village is Karomolun, where the chief of 31 years, Raymond, has stopped the villagers fishing on the home reefs to protect them (and to provide a source of income from divers) and arranges a sing-sing or dance for the Bilikiki guests on its fortnightly trips. 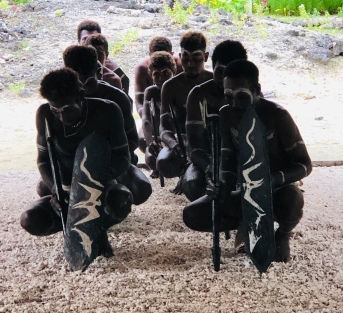 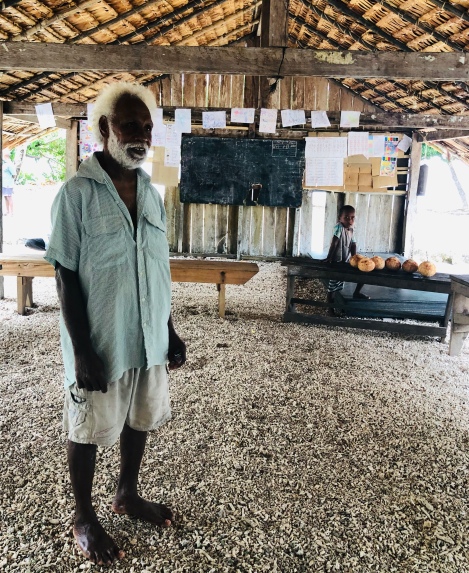 Chief Raymond in his kindergarten

The village is immaculate, the freshly-swept paths lined with cordylines, orchids and frangipanis. The dancing takes place in the kindergarten where the kids come for one hour per day; when they are older they are shipped off to weekly boarding primary school on a nearby island. The priorities become clear when we are told there are two half-hour church services per day plus two hours on Sunday!

There are men’s and women’s dances, with the performers all wearing traditional dress – grass skirts, grass bra tops (probably bare-breasted before the missionaries came), while the men have face-paint, loincloths and wooden axes which they brandish furiously. One of the men’s songs is strangely risqué – ‘I wanna hab sexi with you’ – accompanied by much pelvic thrusting. The women’s songs have strange, moving harmonies although there only seem to be two tunes, until some men appear with home-made pan-pipes which they beat with flip-flops and the songs take on a religious tone, recognisable by the hallelujah choruses. Afterwards we wander through the village, the Santa Cruz crew doling out polaroids much to the delight of the kids.

Nancy giving out the photos 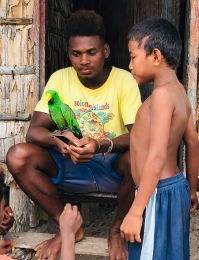 This green parrot was very tame 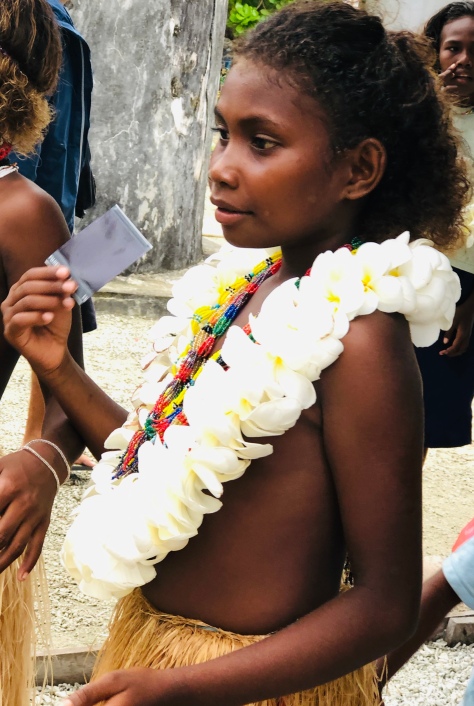 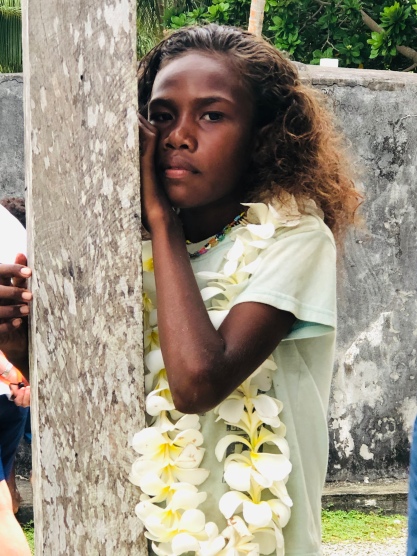 The pan pipes at rest 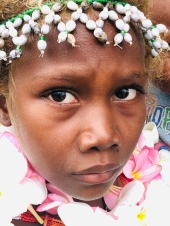 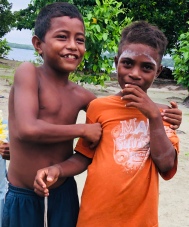 Back to the diving. I particularly like the big stuff; both Pato and Fernando are adept shark whisperers as they play a plastic bottle underwater and summon these sleek beauties from the deep. Our record is 10 at once, ranging from grey reefs, to silver, white and black tips including some babies (when we see a baby Pato and I start singing Baby Shark doo-do-do-doo). I love to hang in the blue amidst the schools of huge striped barracudas, jacks silvery in sunlight, midnight snappers and bump-head parrots. I also never tire of the clown fish protecting their anemone homes. Click here to see Ross’s website with its more detailed description of the dives and fish photos.

Talking to the clown fish

We do a couple of wrecks, one a supply ship with a cannon that took a torpedo midships and another, White Beach, a US supply and hospital station that dumped its equipment including jeeps, shells and ammunition plus a whole load of coke bottles in the sea. Here we have another market and Pato doles out more pencils (deftly popped into the hair-dos) and crayons.

There is unexpected drama on our trip as we have two evacuations: one due to a medical emergency back home and another to skin bends. This is not so easy due to the remoteness and lack of signal throughout. We are secretly relieved that we can hide from the UK election although we get the result by satellite from Oz; at least we can forget about it all while we are here.

The day we arrived, December 7th, would have been Louise’s 30th birthday. It is hard being out of touch with her friends in London. But this is such a peaceful place and it’s a relief being with people who don’t know the significance of the date. On every dive, the gorgeous colourful fishes darting in and out of the soft and hard coral remind me of her, with their extravagant designs mirroring her outfits, their golden colours reminiscent of her hair at its most outrageous, their elegant choreography a celebratory dance at the Marathon or Sink the Pink. She may be gone but her spirit is always with us, her voice in my nightly dreams. The Solomons is a good place to be at peace as we hover effortlessly above this mysterious other world. 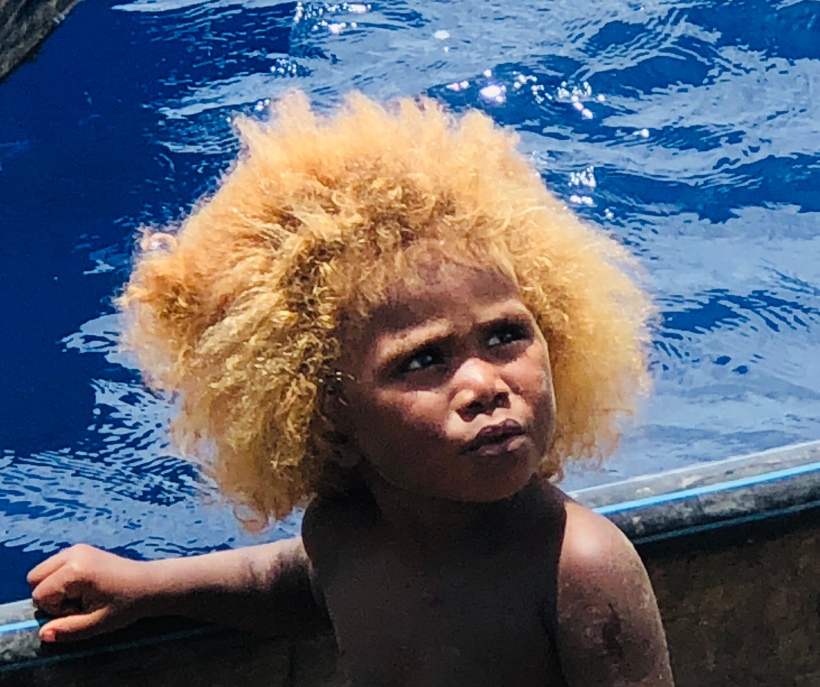 This feisty fellow reminded me of Lulu, with his stern expression and golden hair 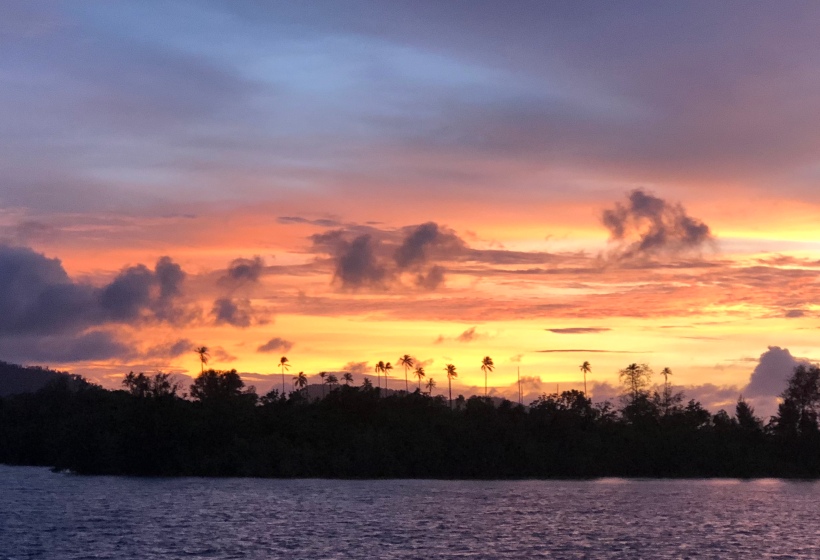 Our next stop is New Zealand for five weeks …I wish you all a Happy Christmas.