Auckland skyline from our apartment

My New Zealand visit starts badly. I am so obsessed by the thought of the rigorous customs police confiscating our Solomon wooden carvings we have brought as gifts that I completely forget the banana I popped into my bag in the lounge, intending to eat it on the flight. Suffice to say, dear reader, I got done and it cost me $400 – ‘no criminal record’ the official says brightly. I have to admit the officials are charm itself – and I just feel a complete fool.

Chastened we move into our rather fine apartment in one of only five tower blocks in sleepy Takapuna on Auckland’s North Shore. We are here for a reunion with three out of four of our New Zealand nannies, or ‘family assistants’ as we used to call them.

The girls – from left, Maree, me, Meredith Missy (and Daisy the pug) with Holly and Piper the Border Terrier

On our first morning Missy, Maree and Meredith with various children and dogs in tow take us for a stroll and brunch on Devenport beach, but it the dogs who seal the show as various Australian tourists go gooey over Daisy the pug in particular. Tommy arrives that evening (he has been doing a tour of South Island with some mates) when we are rather merry after a full reunion with the gang and husbands, Logan and Nick. 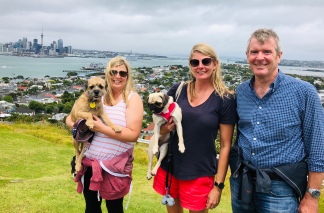 Takapuna and Devonport are charming and low-rise (our apartment notwithstanding). Devenport town centre reminds me of Sidmouth with its late Victorian/Edwardian buildings and Esplanade Hotel. I am thrilled to see agapanthus hedges and the flamboyant flames of my childhood, along with strelizia, canna lilies and bougainvillea. The older houses are wooden with ornate porches and art nouveau stained glass windows.

On Christmas Eve we jump in the car to do some wine-tasting in Kumeu, where we also have lunch at the Hallertau Brewery, before continuing to Muriwai beach, which is miles of blasted sand with crashing breakers and a roaring rip tide. The safe Swimming area is tiny, and there is a brisk breeze blowing: in fact I find it all rather chilly as the wind is relentless throughout our first ten days or so and keep feeling the temptation to buy something warm and merino! This is a fruit-growing area as well as wine, and there are huge leylandii hedges protecting the produce as well as the ubiquitous agapanthus. There are cows, horse and sheep, of course, grazing the steep hillsides. 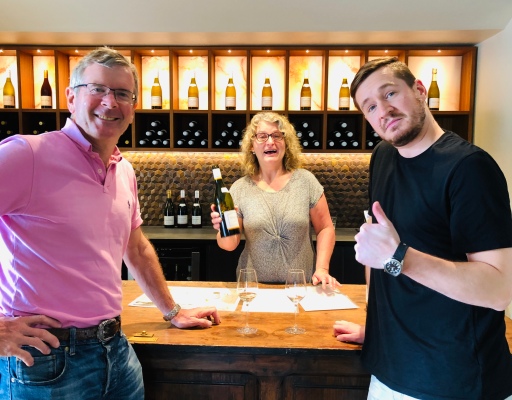 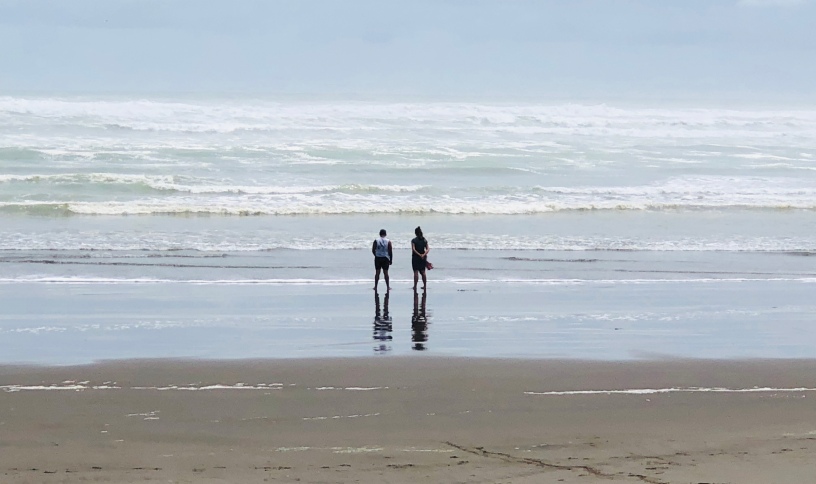 On Christmas Day morning we go for a walk along the Takapuna coastal path, which is an old lava field and quite tough on the old legs. There are some extraordinary houses, including a castle whose stone was shipped all the way from England, and a couple with a funicular to take the residents down the steep hill to the beach! 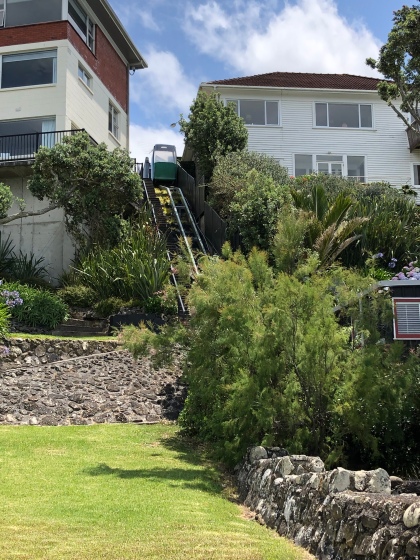 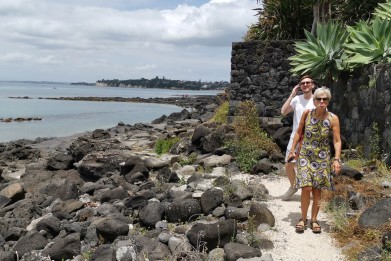 Walking from Takapuna to Milford beach

The rest of the day we spend with Missy & Logan, parents and in-laws, and their two children, Lachlan and Holly, who are thrilled with their personalised Liverpool shirts. The evening ends with Logan and Tommy demonstrating Liverpool chants to some rather bemused children. 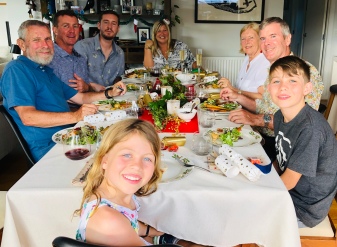 Before we leave Auckland we have a date at the Museum which houses some of the finest Pacific artefacts in the world.

It was seeing the Oceania exhibition at the Royal Academy which spurred us to continue our planned New Zealand trip by ‘carrying till morning’ as Peter Pan might have said – in this case, just carrying on! The PNG exhibits really reminded my of my anthropology days at Cambridge, and it was fascinating to learn more about the area we are travelling through. For instance, we had no idea that PNG and Australia were first inhabited 50,000 years ago, while New Zealand settlers only made it over via Polynesia in their fabulous war canoes about 800 years ago. Learning about Maori culture is rewarding; we have noticed that Kiwis are rightly increasingly proud of their heritage.

Our next stop is to go up to Northlands, where Missy has booked a large ‘bach’ on Whale Bay as they call holiday homes here to house her family, Maree’s mob and us! Surprisingly we arrive first despite a huge diversion on unmarked dirt roads to avoid the terrible post Xmas rush up north, which is where the weather is warmest, the beaches finest, and the surf most inviting. 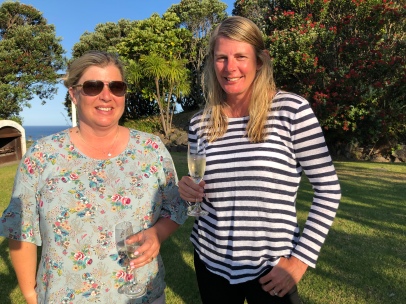 Logan pretending to be Salah

It really is a strange place with a traditional Fijian ‘bure’, a bunk-room annexe, a shed Tommy nicknames ‘the murder house’ because of the strange art, complete with a double bed and nowt else, and then our quarters, the Boat Shed with a huge outdoor double shower and loo! Somehow all 12 of us are comfortably accommodated. 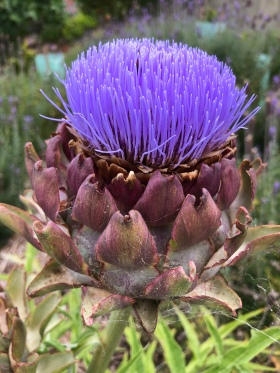 In fact it’s wonderful. The views over Whale Bay and over to Matapouri are stupendous and the garden is alive with birds – not only the dive-bombing, white-collared tui but swallows, fan tails, NZ pigeon and a resident morepork owl.

View from the house overlooking Matapouri

Logan, Nick and the kids, are all surf mad so we visit various beaches to swim (not me, far too cold) and to surf. Its peak holiday season and there are camper vans and tents everywhere, but it never feels too crowded: there are just under 5 million people in the whole country, which has as much coast line as the whole of the USA!

Coming our of the freezing sea at Matapouri

The highlight is a day trip on a large boat to the Poor Knights islands; Tommy and Ross are to dive (far too cold for me requires 7mm wetsuits with liner) and the others will snorkel (ditto for me!).

The Poor Knights is so named as when Captain Cook first saw them he was reminded of a poor dead knight lying on a tomb with his arms crossed over his breastplate. The islands have been uninhabited since the mid 1820s when the villages were razed to the ground in a fight over some pigs by an enemy Maori Chief and declared ‘tapu’. They are now wildlife sanctuary and a marine park and no one but scientists gain access; consequently it has many endemic species and the fish life is abundant. They also have the world’s largest sea cave and sea arch.

The Poor Knights is an iconic world dive site – and yes, I missed it! Read Ross’s account of a great day out (despite some seasickness as there was quite a swell!) The kids – Holly in particular who is quite fearless – loved it. The day ended with cocktails, green-lip mussels and take-away pizza, very Kiwi.

Maree having difficulty getting down the ladder in the swell 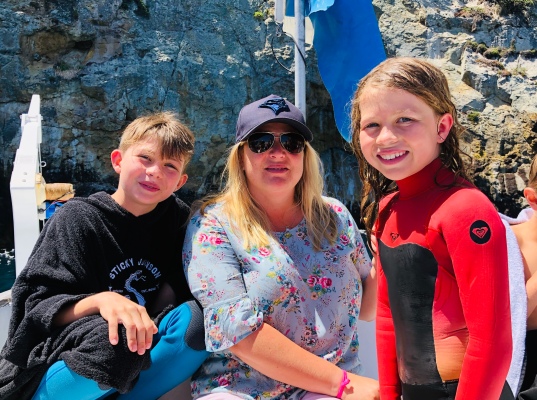 Missy with Lachlan and HOlly 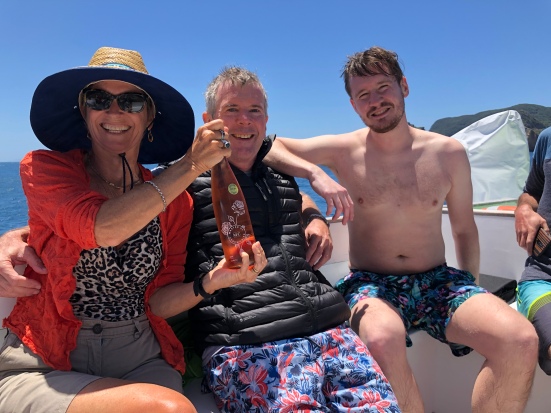 Wine for the trip back! 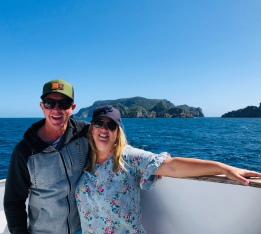 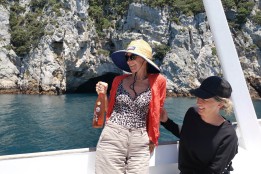 At Poor Knights with largest sea cave in world in background

Early the next morning en route for Waiheke, Logan takes us to meet his friend Dillon, whose Wife has a riding stables (and a sweet 7 -week chestnut foal), and some eels he has been nurturing for over 20 years. They are now huge and the kids – Tommy included – are quite fascinated and feed them squid; poor Lachlan gets his fingers nipped!

As soon as we leave the north the weather turns wet and grey, and we encounter traffic, but we make it to the ferry to Waiheke bang on time and when we arrive the weather has miraculously cleared; Waiheke lives up to its reputation as having the best weather in NZ. We are staying in Onetangi, which is nothing but a long white beach and a bar, Charley Farley’s, where we see in the New Year. Our little apartment has many visitors – thrushes, rabbits, and the ubiquitous local water bird, the pukepo, which pecks away at the lawn.

Waiheke is famous for its wines and, so on our one full day there, we embark on a tour of some of the choicest vineyards. Tantalus is one of the newer and more boutique estates, and has beautifully landscaped gardens. We lunch at Te Motu, one of the oldest estates encased in agapanthus, in a shed, but is relaxed and the sharing plates are divine – as is the rose. Ross is being careful as drink driving laws are strict here so he only has one glass. We are joined for a drink by Tommy’s friends James and Clare. 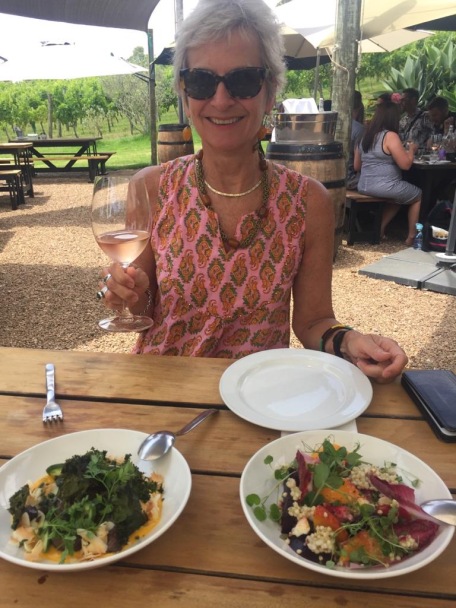 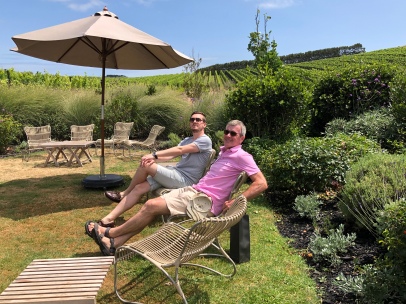 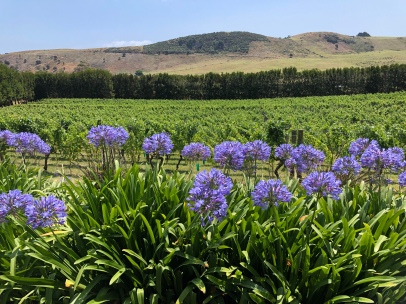 From there right over to the east of the island to Man o’War, the only wine estate on a beach, crowded with holiday makers; glad we didn’t lunch there but it’s another jolly tasting. The estate is so-named after the great kauri trees which were plundered and sent all the way back to England by Cook and his cronies to make man o’war ships. On our way back we stop off for a walk to Stony Batter, a NZ army defence emplacement constructed to fend of the Japanese should they make it this far (they didn’t). We walk through the rolling vineyards, looking out towards the Coromandel, our next destination.

New Year’s eve we spend in a delightful, casual yet delicious, restaurant, the Oyster Inn in Oneroa. On the first day of the new decade as we breakfast on the beach Louise visits us in the immortal words of Bobby McFerrin, ‘Don’t worry, be happy’. It’s all that matters.