Castle by night with Szechenyi chain bridge in foreground, built by a Scot

Our son Tommy has bought us a weekend break in Budapest as a 60thbirthday present. He has chosen the hotel, devised an itinerary and booked a Michelin star restaurant for the Saturday night.

The central courtyard of the New York Palace hotel

Ross and I rendezvous at the airport, arriving separately from London and Basel. The New York Palace Hotel is not in the poshest part of town, but it is a fine old art deco building with towers and flags fluttering to greet us. On arrival we are told we have been upgraded to a junior suite. It is enormous, with a massive marble bathroom, terrace and separate sitting room. There is a bottle of Laurent Perrier on ice and a chocolate mousse cake in best Hungarian tradition, with ‘Happy Birthday’ in chocolate decorating the plate. 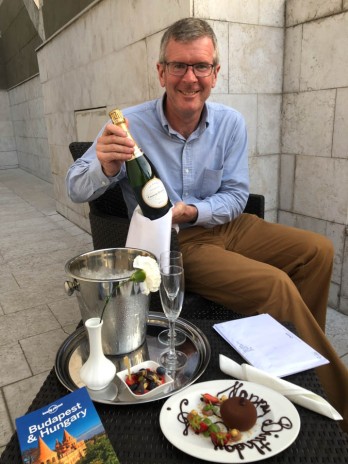 celebrating on our terrace 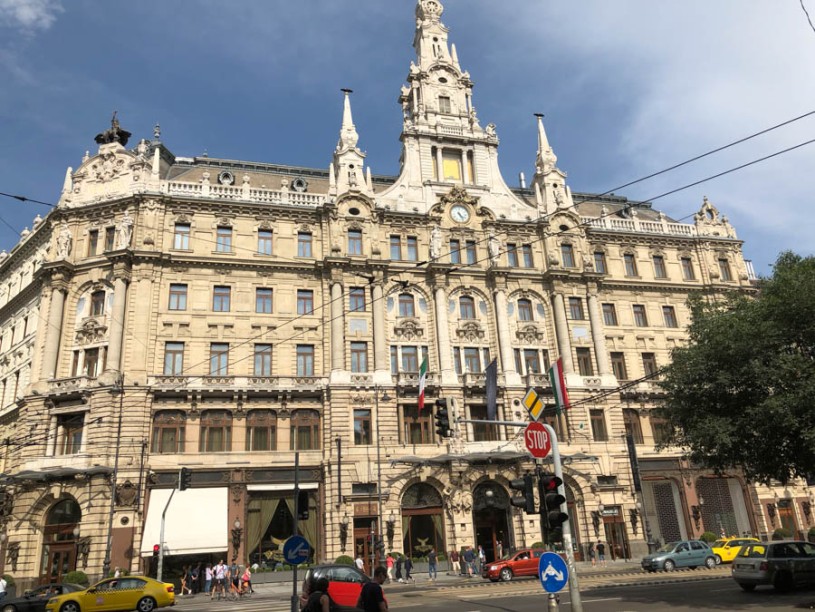 The New York Palace form outside

We have supper in the New York café/brasserie, one of Budapest’s most opulent fin de siècle venues, with rococo nymphs, painted ceilings and gilt everywhere. We opt for Astro- Hungarian fare – schnitzel and potato salad for me and roast duck breast with cherries for Ross.

The ceiling at the New Yok cafe

The next morning it is raining and so we set off on the metro on day passes to see the sights. First the Castle complex, which we can imagine would be stunning if we could see past the umbrellas. Budapest is the centre of Danube river cruises so we are swamped by large groups of elderlies chattering away in all languages; plus the ubiquitous Chinese taking selfies. By 1.30 we need lunch and we find a good brasserie, Urban Betyar over the Szechenyi chain bridge, with modern Hungarian food, though there’s nothing too modern about my Goulash soup, except that it’s not over-thickened and delicious!

Wet in the castle complex 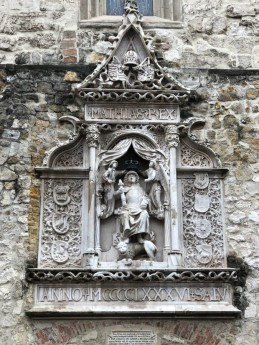 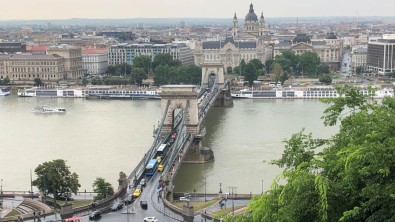 The chain bridge from the castle

Entrance to the castle complex 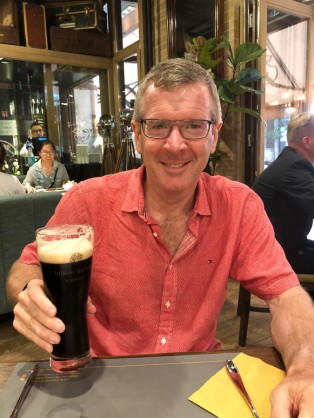 Another day, another beer!

it’s off to the Szechenyi spa, a series of 20 pools of which 18 are thermal. The outside pools are more like a water park, crammed full of mostly large and tattooed bodies, all ages, all nationalities. Some of the sights were repulsive, like the man whose enormous gut tumbled over his g-string – yes really – so as to render it almost invisible. Inside the thermal pools range in size and in temperature. Again very busy. I felt it was doing my poor tired old legs good. 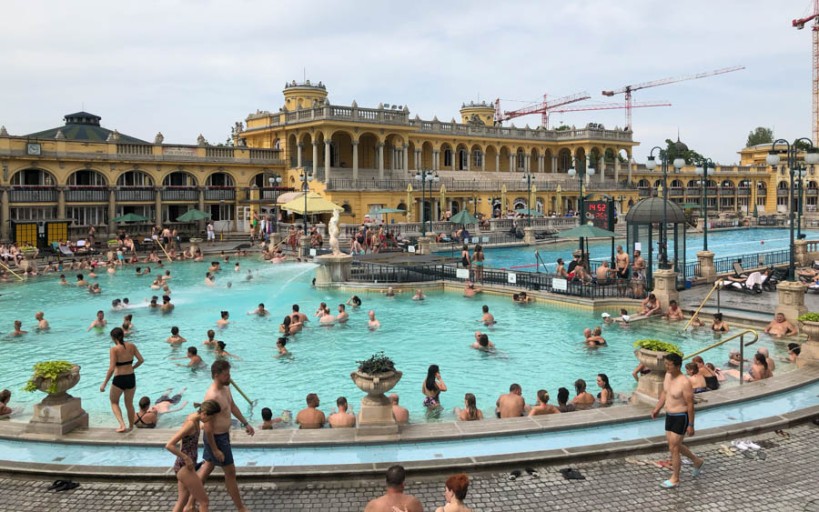 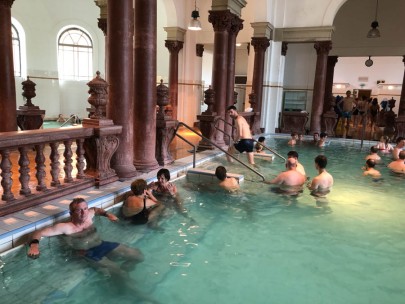 Ross on left taking the waters…

Tommy has reserved a 6 course tasting menu with accompanying wines at Costes Downtown, where the chef is Portuguese much to my surprise. Despite the rather clinical and austere décor, the food is superb: there are amuse bouche, pre-starters, pre-desserts and chocolates in addition to the six courses, and six glasses of wine. The local fizz surprisingly good and the wines also, ending with a vintage Tokay. To die for!

The local pork filet with varieties of fennel 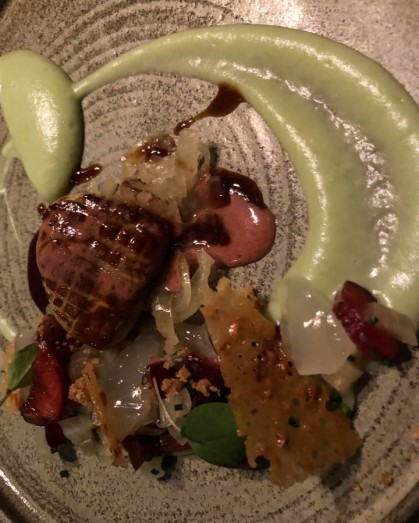 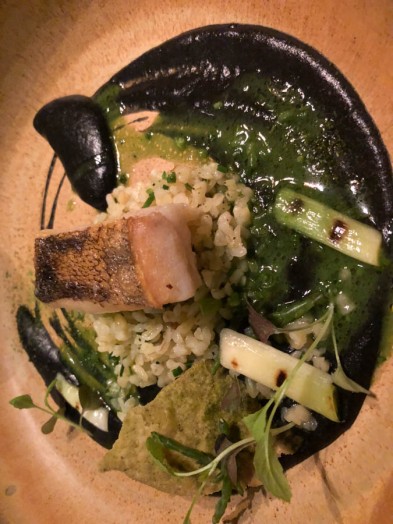 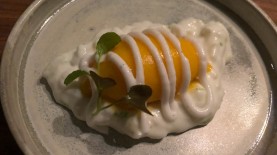 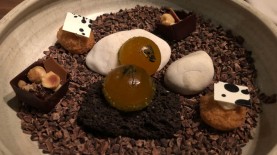 And some chocs and h jellies for good measure

Day two dawns sunny. The hotel is in the Jewish area so we wanted to wander round and get the feel for what Budapest was like. Everywhere you can see what a grand old place it must have been, with its elegant court-yarded  ‘palaces’ like our hotel lining the streets, some more grand than others. Lots of stucco statues and fancy plasterwork around windows and balconies; in the ghetto there are Jewish motifs on the walls, nowhere more so than round one of the old synagogues and the large kosher restaurant. The ghetto wall has been restored, but annoyingly it is behind locked doors so we could not see it. 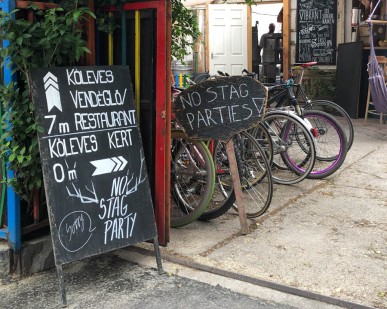 Stag parties are a menace here! 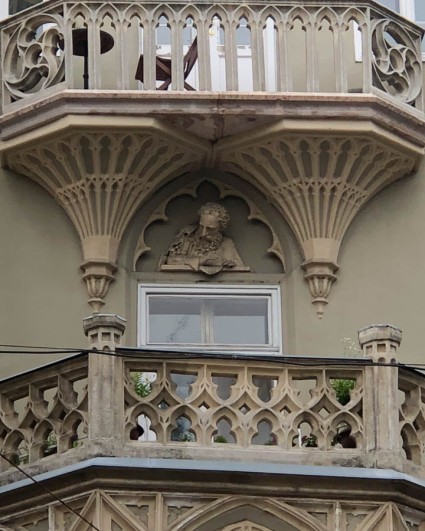 …and Hungary’s world cup win over England at Wembley 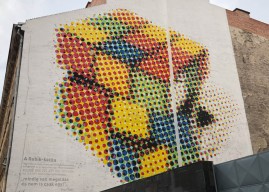 Celebrating Rubik with a mural 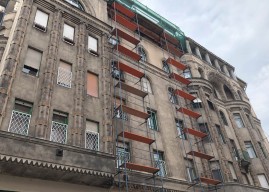 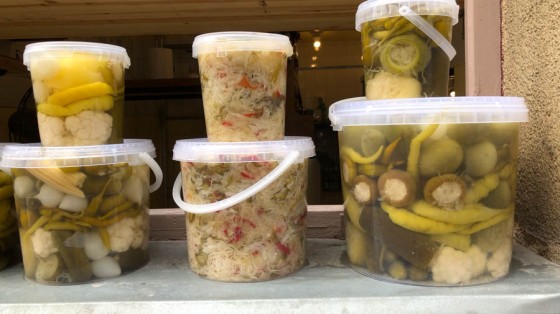 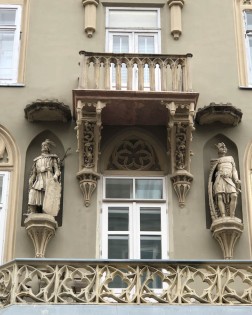 More impressive is the Grand Synagogue, the largest in Europe and former home to Theodr Herzl, the founder of modern Zionism, whom my grandfather admired greatly.

The main hall of the synagogue

There is a moving memorial garden within its walls, with an aluminium tree comprising leaves with victims’ names, and mass graves. 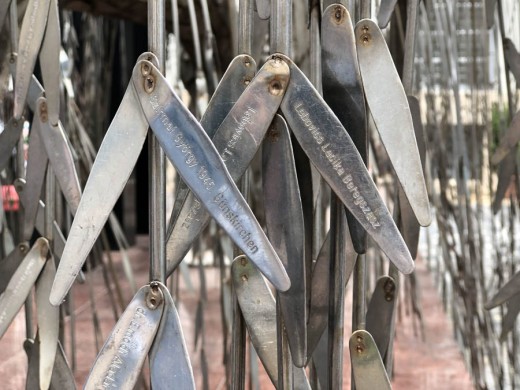 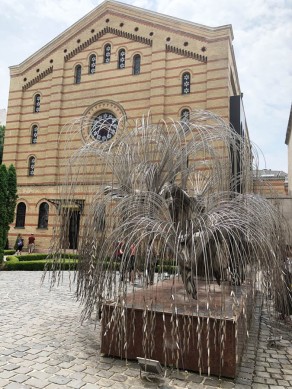 Budapest’s remaining 70,000 Jews – 80,000 had already been murdered at the end of 1944 – were rounded up there in 1945 before many  died of starvation and cold. The Swiss consul Karl Lutz rescued many thousands.

It leaves a bitter taste in the mouth, especially when I consider that this was the Austro-Hungarian Empire of my family’s history. Ungar means Hungarian in German, and indeed I found some Ungars on the memorial wall. 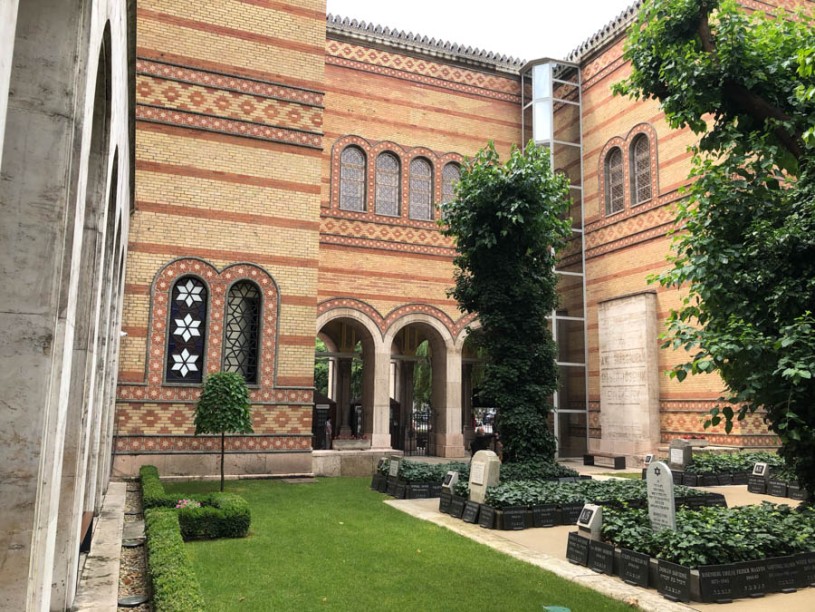 We are disappointed with the top recommendation for lunch, an Israeli-style restaurant called Mazel Tov. We should have stayed at the farmers’ market in Budapest’s most famous ruin pub the Szimpla Kert, but it was rather hot.

Entrance to Mazel Tov, down at heel like many buildings in the Jewish quarter

Inside the Szimpla Kert ruin bar

Time is ticking so we make a dash to the Budapest Art Gallery by the Heroes Park, only to find it is closed until October for renovation. Instead we visit a museum opposite where there is a charming display of folk art, craft and culture – this is where Donavan’s hurdy gurdy came from. The parallels between felt-making in Kirgizstan and kilims from Turkey should not surprise as Hungary was part of the great Ottoman empire – I even recognised some Turkish words. What strikes me most is how the rural life and proud peasantry is now a distant memory. Unlike western Europe, eastern Europe had a much more visible cultural tradition with fine costumes, pottery and handcrafts. Communism destroyed all that.

Traditional band with hurdy curdy on the left

As we reach the hotel, 22 kms, 33,000 steps and two days later, thunder and lightening crash above us and we collapse waiting for our taxi to the airport. It’s been a packed and fun two days, and my legs have just about survived their work out.

The fabulous Parliament building, even on a grey day!