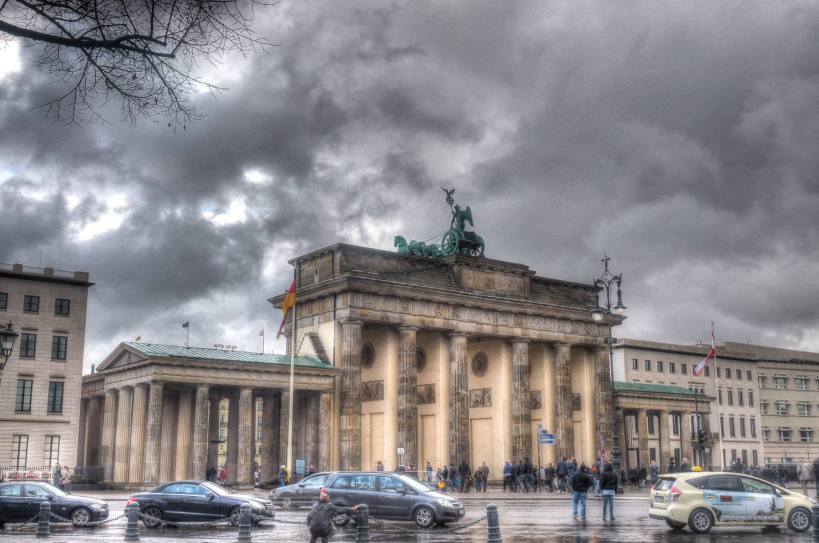 A romantic weekend break in Berlin. Sounds wonderful, but it gets off to a bad start. Ross and I are all set to arrive simultaneously from London and Basel and meet just in time for pre-dinner drinks in our boutique hotel, i31, in the Mitte area. 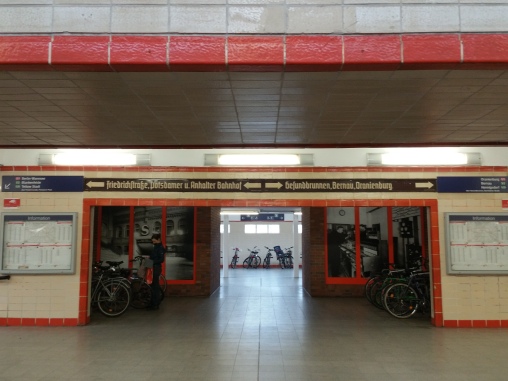 Standing in the security queue at City I realise I have forgotten my passport, so £350 and several hours later I arrive grumpy and distraught in time for a huge G & T…lucky the dinner reservation was for 9.15! The highly-recommended Katz Orange, within walking distance, soon calms me down!

Katz Orange restaurant in a scenic courtyard, even in the rain!

I had visited Berlin well over 10 years ago on an in/out business trip so I was thrilled to be returning. All the more since I now know my grandfather Hermann Ungar was a Czech diplomat here in the 1920s, an enfant terrible of the social scene, and founder member of the 1925 literary group whose members included Bertolt Brecht and Stefan Zweig. It was here he wrote his controversial novel, The Maimed, it was here his plays The Red General and The Arbour were performed, the latter posthumously; and it was here he was run over by a tram which fractured his femur. My father also grew up in Berlin, although he remembers little about it. I am determined to see if I can trace any of their old haunts.

The bombed remains of the Church in Kufurstendamm church, opposite Hermann Ungar’s apartment 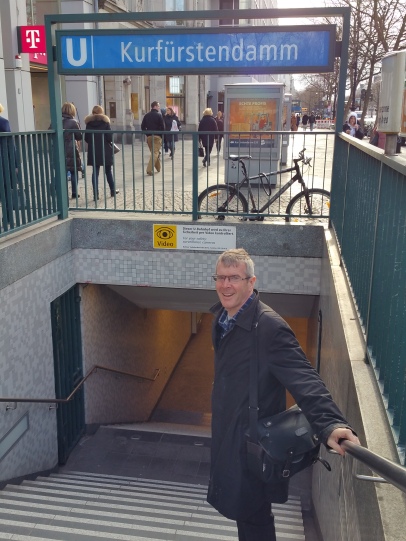 The entrance to the U-Bahn on the street where Hermann Ungar lived, outside his apartment in fact

We do all the sights in the pouring rain, with the wind whipping straight through us. Umbrellas are inside out, and hair on end as we brave photographs by the Brandenburg Gate and the Reichstag. We take refuge in the Adlon where I am told off for taking a photograph; I pretend I don’t understand. 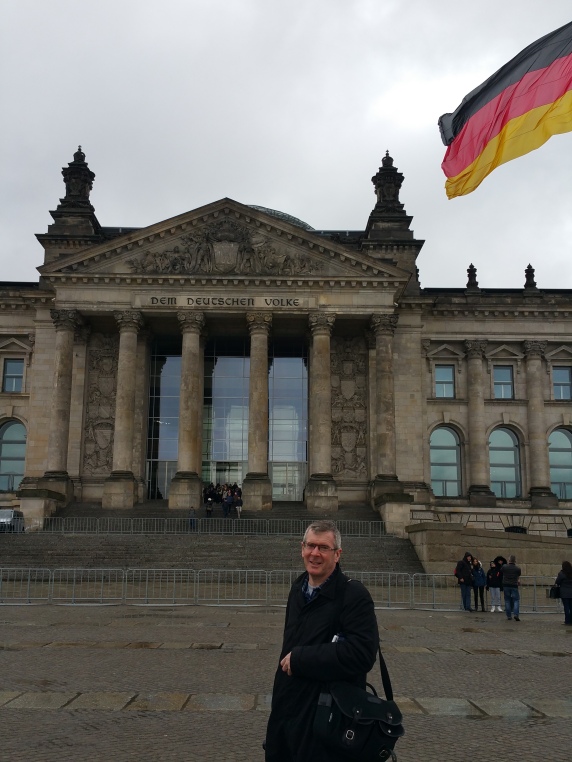 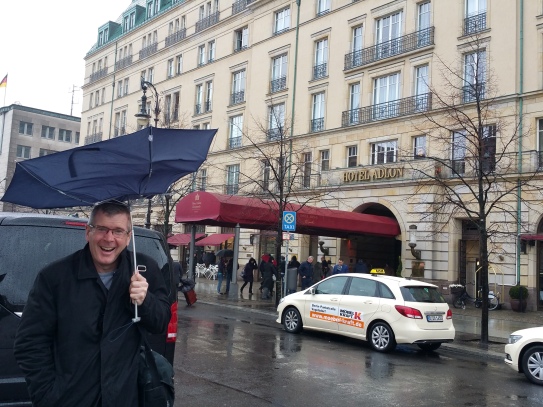 The inscription on the Reichstag

Looking out to the Museuminsel

I resort to buying a bobble hat (a bargain at €5) so I don’t have to hold the umbrella, and to keep my head warm, as the wind-chill is searing. 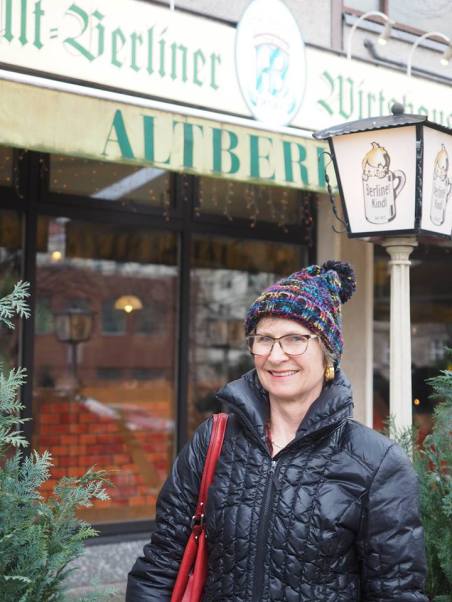 The sun comes out later, as we make good use of our day pass on the U and S Bahn, drop by Checkpoint Charlie, see the Wall, and visit the Berlinische Galerie – our second choice as the queue for the Pergamon museum was 2 hours long – the modern art museum. I wonder how many of these artists Hermann Ungar knew – Alfred Döblin, one of his great friends, is mentioned in a picture caption.

The border between East and West Berlin…

A remaining piece of the Wall 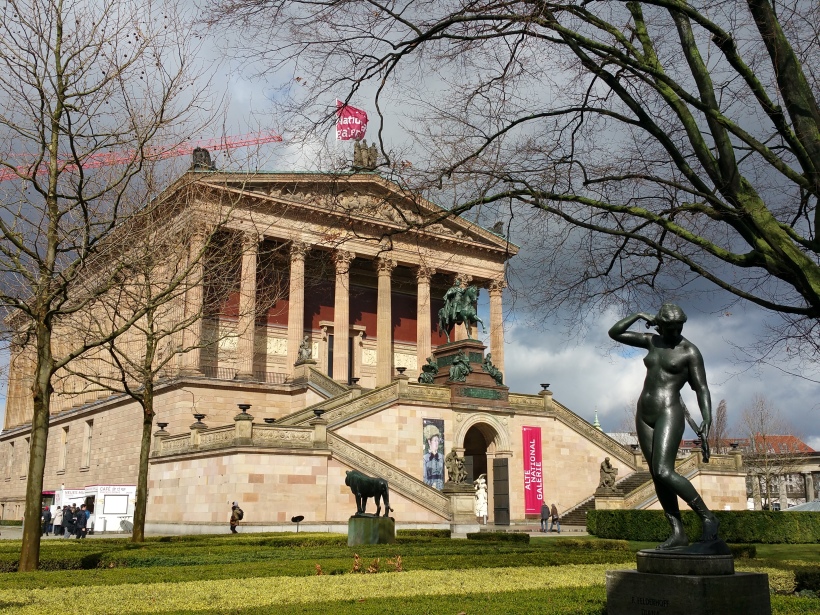 On day two we visit the Jewish Museum, which has a memorable wing designed by Daniel Liebeskind – the voids in-between the geometric floor templates are to commemorate the absence of Jews in Germany. His more famous monument is the Genocide Memorial, a moving tribute in granite tombstone slabs.. A hugely impressive building, and the exhibit no less so. I am staggered to find a larger-than-life photograph of my grandfather’s best friend, Gustav Krojanker, as part of one of the exhibits on Zionism in the early 20th century, resplendent in his Jordania uniform, a group my grandfather also belonged to. 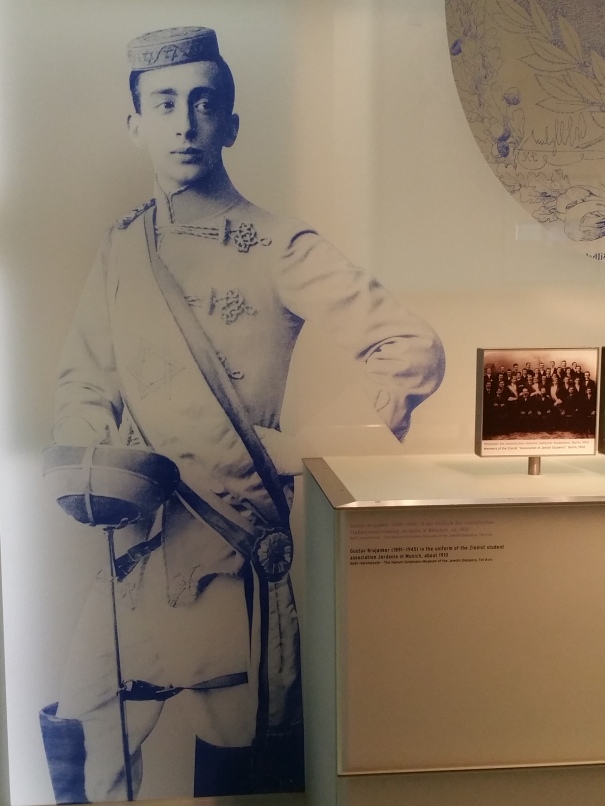 The memorial in the Jewish Museum 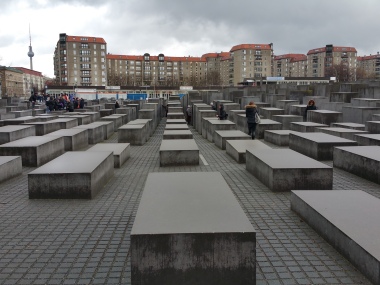 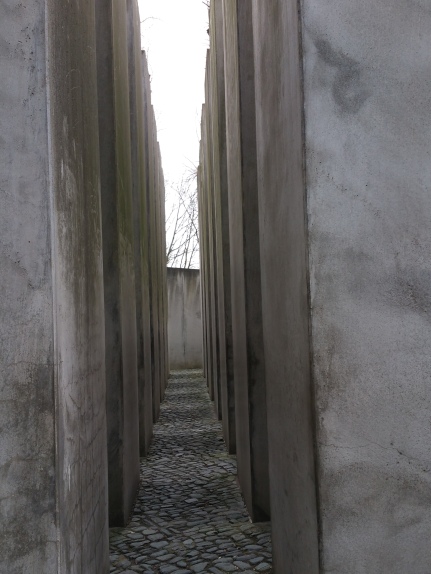 The rain is never far away and so we are compelled to indoor pursuits on the second day, with a visit to the exquisite Gemälde Galerie, which houses a collection of old masters from the 15 – 18th century, including works by the early Dutch – Vermeer, Bruegel, Hals, Bosch – and also by Fra Angelico, Cranach, Rubens, Botticelli and Rembrandt. And when my legs won’t take any more we repair to the Adlon for a couple of sneaky cocktails… 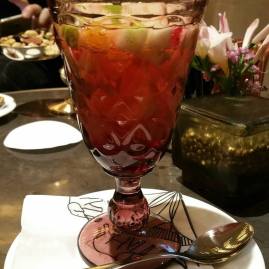 But a trip to the Kufürstendamm, where my grandfather once lived, and where stood the Romanische Café, one of his haunts, are now all modern buildings, razed by bombs and time. The single remaining 19th century building is next-door to Hermann’s old apartment, which is now a Starbucks…but I like to think that’s what it would have been like.

This is the next-door building to 233  Kufürstendamm; my grandfather lived at no 234

Berlin is a culinary capital, and we enjoy some great meals, ranging from the compulsory curry wurst, scoffed by Ross at the traditional Alt Berliner Wirsthaus, complete with a frothy local lager. His bratwurst and sauerkraut the following day ‘Munich-style’ are also delicious. 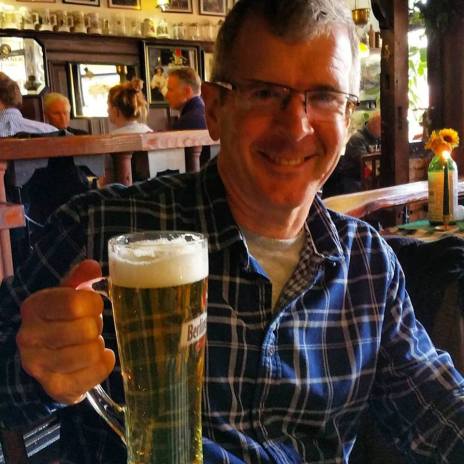 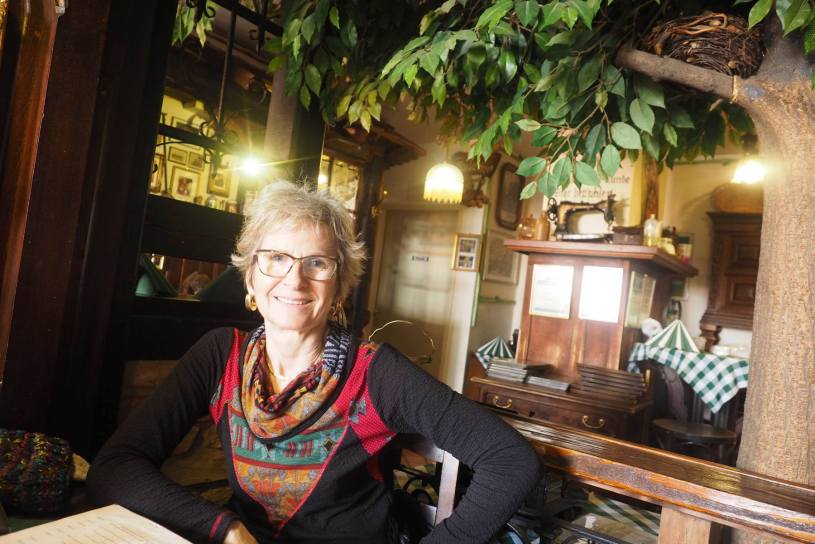 In the Alte Wirtshaus

On the first night we have a gourmet dining experience on the 16th floor of an old council block in a trendy restaurant called Solar. The bar level, on a suspended mezzanine above, is throbbing – literally – with a disc-turning DJ and seats banked like a honeycomb. On our last night we eat at the trendy and minimalist Das Lokal, a few minutes from our hotel, where we gorge on a surfeit of beetroot, turnips, artichokes and other healthy veg (as well as fish, game etc!). 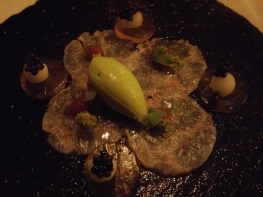 Halibut and wild garlic at Lokal

Our routes take us into some of the backstreets, and around many railway stations. I am shocked to see how many homeless and derelict people there are; at the Tiergarten they are assembling for a hot meal; several have huge suitcases, one or two are in wheelchairs, shrouded in blankets. On the streets and in the trains, there are buskers. It is grim. I wonder how many are casualties of the refugee crisis, and how many are simple casualties of life.

Grafitti at one of the stations

But on the whole the Berliners seem a cosmopolitan and jolly bunch – lots of young parents and children and gaggles of giggling girls. They are out-numbered by us visitors!