Finally we have a day to remember, one where we see no other tourists, western or otherwise. We are headed for the monastery of Tenduling (Dondrupling in Mandarin), founded the same year (1667) as Ganden Sumtseling in Shangri La. It’s a good 100km, and the spanking new road cuts swathes through the rugged landscape – criss-crossing bridges over the Yangtze gorge, suspended on monolithic pylons and viaducts, boring through impenetrable hillsides with 3 km long tunnels. Everywhere roadside kiosks are springing up to cater for the long-distance lorry drivers – and the Chinese tourist. This is the main road to Lhasa. It is breath-taking and impressive. Whatever you say about the Chinese, they are single-minded masters of road-building and engineering.

The road to Lhasa, winding around the mountains

The land around the river is fertile and the famers are growing tobacco, maize, potatoes and barley and, more recently, green vegetables that are for local export. The hills are said to host bears, leopards and blue sheep, although I would be surprised they have not been hunted out by the Chinese soldiers. We stop every now and then to take photos; and then we are halted three times by new and impromptu roadblocks where unpleasant Han solders demand all sorts of paperwork and even confiscate our driver’s licence until the return journey.

We finally arrive at the monastery, its golden dome glistening starkly against the mountain-side. A bathroom trip is required before we enter; I spoke too soon in an earlier blog about cleanliness. There had been no running water in our open trench for some time – need I say more. Except that the view from there is quite spectacular.

The view from the loo

In the monastery courtyard, a young monk is doing the washing in a twin tub; two teenagers are playing a game like our boys used to when they were kids, using discs that you slap down with a loud thwack. Inside, all was red and quiet, save for the incessant tapping made by a group of monks making a sand mandala, just like in House of Cards. What a privilege to see that. In addition to the yak butter lamps, which smell horrid, there are some pictures made from the same, which are rather charming. We climb all the way up several vertiginous staircases to reach the top, where the Abbot has his room, and where we see pictures of the Dalai Lama. It is a tranquil spot, which largely escaped the ravages of the Cultural Revolution. Our guide tells us that many monasteries and villages buried their holy relics and statues in big water storage tanks during the difficult years. 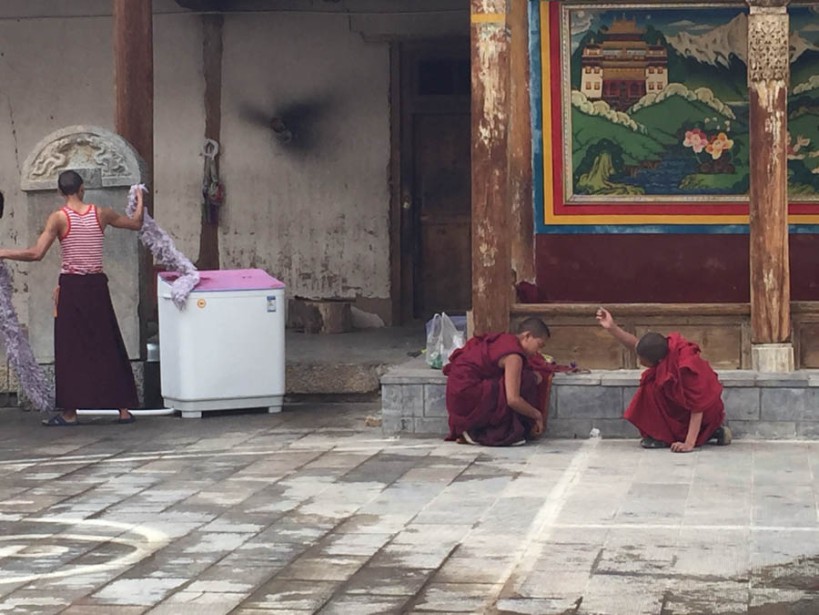 Monks at work and play

The ancient courtyard, largely untouched since its founding 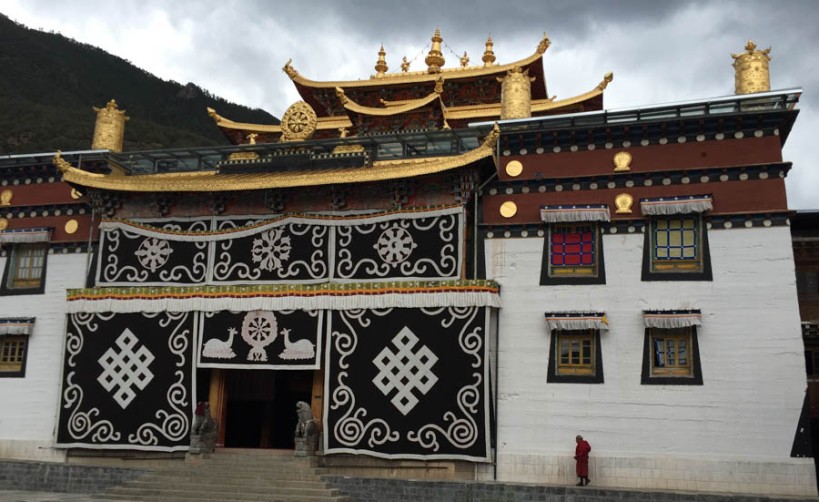 A monk on his way to prayer

Do you remember this game? I do, but not its name

The monks making a mandala from sand (courtesy Ross Cattell)

We have a disgusting lunch (cancel the yak I say just in time, so we just have oily vegetables) in a filthy roadside inn in one of the villages that straddles both Yunnan and Szechuan; this year a bridge joining the two has been opened. Here they grow vines and make wine, and we taste some delicious local nectarines. I give the public loo a wide berth.

Visitors to the monastery 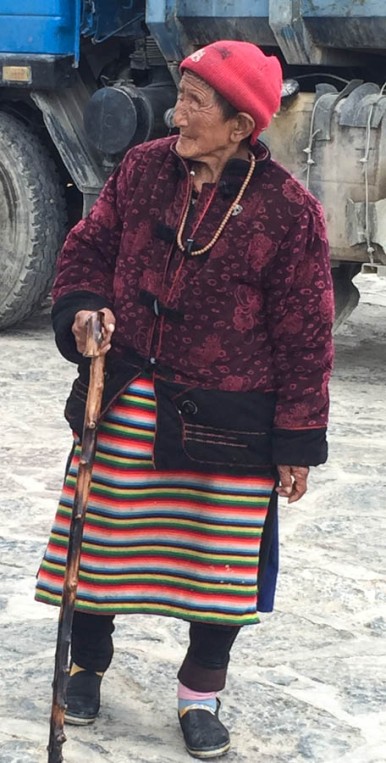 Visitors to the monastery

Our final stop is to the pottery village of Nixi: again we are the only visitors and we stroll quietly though the walnut groves and herds of nonchalant cows, visiting the potter – we buy one of his yak teapots – and his house, which still retains the ancient Tibetan dresser, cupboards and cooking pots. It is also the home of the Abbot of the Tenduling monastery and we tiptoe into the shrine, complete with surprising photos of the Dalai Lama, and into his bedroom, piled high with books.

Courtyard of the potter’s house

In the evening, our guide takes us to a huge restaurant owned by one of his village friends – his village is hours away in Szechuan in fact, and sits at 4000m – where we taste another form of yak – yak pie! Ross braves some more butter tea. I have been abstaining from drinking recently – altitude sickness still renders me a bit off-colour – so sip some pu’er tea. Then to a Tibetan cultural show – dancing in colourful costumes, telling the history of Tibet. The audience is entirely Chinese and films the whole thing. As I watch the sumptuous display of professionalism, I ruminate that this is how the Chinese like their minorities: anodyne, attractive, on show and under control. 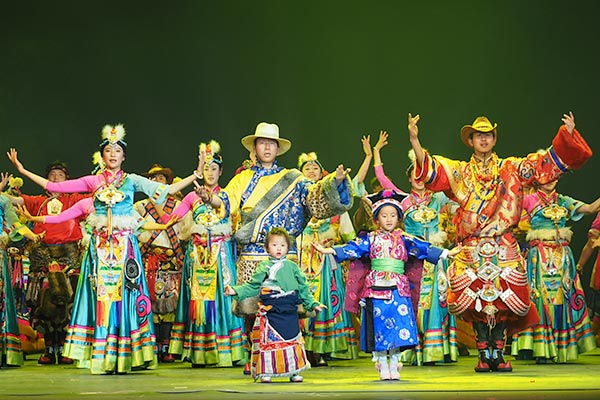 The grand finale for us all (courtesy Ross Cattell)

And so our journey ends on a high note. Reflecting on the 11 days we have spent in SW China I have come up with a few tips for others who wish to visit this region. And I do think it is worth visiting; I just wish we could have done it justice.

Despite my reservations, we had a fascinating few days, but I will never pay someone else to organise a trip to China again!

For a more erudite approach and better photos (mine are all on the iPhone) see Ross’s website.

The interior of the Tenduling monastery

Great big thanka outside the monastery

Shelter for drying the hay

Inside the potter’s courtyard

View of the old Tibetan dresser

Abbot’s shrine in the house

Pictures of the Dalai Lama