It’s a problem getting round in a city where no one speaks English, on your own, with a gammy leg to boot. Do you arm yourself with characters on pieces of paper, to show to taxi drivers, and hope for the best, or take a tour? Option no 1, going it alone, is fine for small trips, as I find when I visit the Mori Tower, home to the Mori Art Museum, where I enjoy the sight of tiny Japanese ladies examining the intricate details of dead stags, and the glory of Ophelia, as much as the Pre-Raphaelite paintings themselves, most of which I had already seen in the Tate anyway. I can wander round the upmarket Rippongi malls, and admire the stunning view from the 52nd view observatory. Very easy on one’s own.

View from the Mori Tower, looking towards the Tokyo Tower, which I visited on my tour.

One of Louise Bourgeois’s spiders in the Roppongi mall

Or when I visit to the Tsukiji Outer fish market, and meander amongst the throngs of people admiring the vast array of fish on display. $20-30m of fish is traded there every day, equivalent to 2000 tons, comprising 800 varieties from 100 countries. Now these last facts exemplify why a tour is so important – I gleaned them as we sped by the market in our bus. The conundrum in a nutshell – lots of facts on tour, but no time to stop except at the busiest, most visited sights.

Salmon roe and WHALE meat on display at the fish market 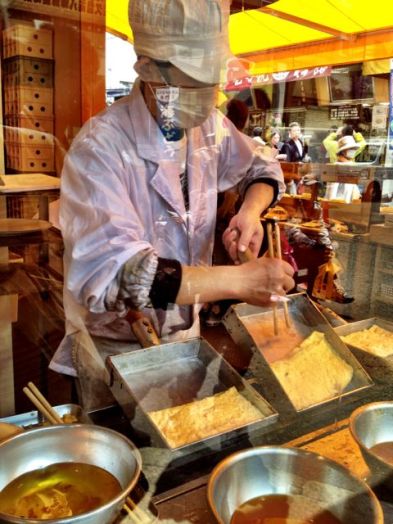 The real downside of tours is the other people – and endlessly waiting for them. I was lucky on my Fuji tour to find a good companion; on my Tokyo tour the people are pretty damn average: large American ladies in brown velour track suits; an incredibly dim British couple who ask silly questions, time after time; the French couple who hog the view of the river on our boat trip, by both taking photos – so I had to resort to a nap instead; and all sorts of grey people who make no particular impression. 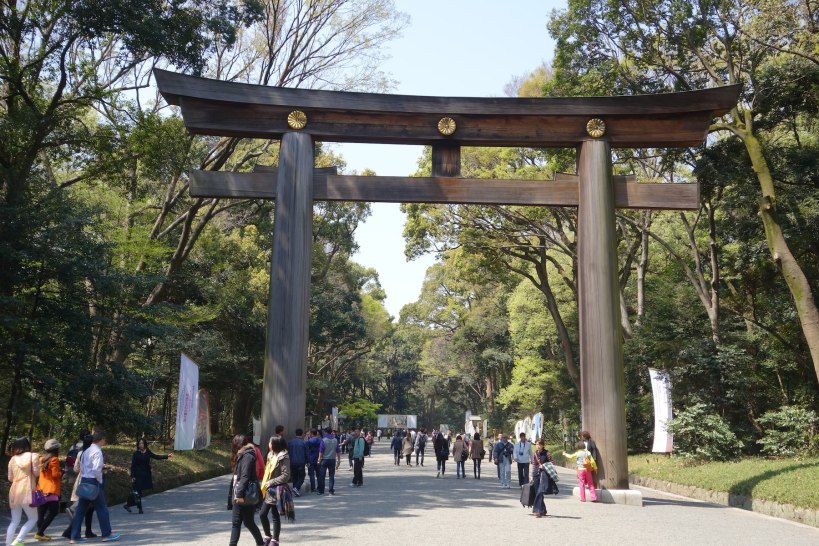 Entrance to the Meiji shrine, built in honour of the first Emperor of a unified Japan,at the end of the 19 century 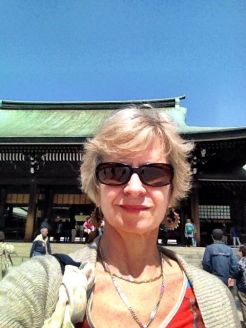 Selfie at the Meiji shrine (resort to this when not talking to fellow bus members!)

I tend to keep to myself, except for a couple of encounters: one with a 21 year-old Venezuelan girl, in Tokyo with her Karate senso, preparing for the world championships in the autumn, and an Indian family living in Thailand with whom I had an interesting chat about the elections and the ‘Fake Gandhis’ who have ‘ruined’ India. ‘They have stolen the name, not real Gandhis’. But as I said to the old father, referring to the state of affairs in Thailand, out of the frying pan, into the fire. He laughed ruefully.

Karate kid with a Ninja!

Of all the things I saw in Tokyo (none of it particularly old as there was much bombing during the war, but attractive all the same: huge temple complexes, fine gardens, surrounded by cherry blossom), the most extraordinary was the hundreds of thousands of people snaking around the approach to the Imperial Palace in a rapidly moving queue, almost at a jog, in order to get an unprecedented access to the interior of the Palace. It was only open for four days and it seemed like all of Tokyo wanted in. 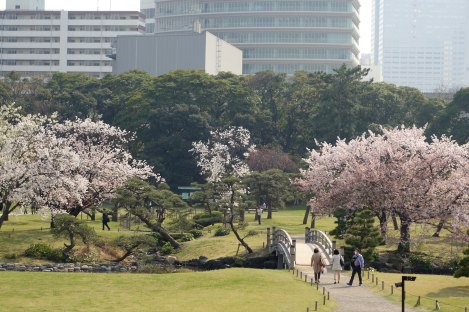 The gorgeous Hama-Rikyu tidal garden, belonged to a Shogun

The queue for the Imperial Palace, showing one of the gates, and the conintuing line, in the distance

In the evenings we eat with Ross’s colleagues; one night having a yakatori fest; chicken every which way and all rather disgusting, even the shitake mushrooms were not good; the next having a more typical fine dining experience, with lots of exquisite courses. However, after a week, I am rather fed up with raw fish, unsalted sticky rice, bamboo shoots and miso soup!

So how did the leg stand up? In five days I must have walked a minimum of 4-5 kms per day, including round Ginza shopping area, laden with newly acquired porcelain and an iron teapot, only to arrive at my destination, UniQlo, to find it demolished! As you can see from the photo it has improved hugely, although it still swells up like a puff adder by the end of a day’s exertions, but, snakelike, it has also sloughed its skin. The burn has gone and is replaced by new, light pink flesh, which looks delicate and fragile. No sunbathing!

View of back of leg, still a bit red but nothing like as before

Back in Singapore, I am exhausted by my travels yet exhilarated at some semblance of a return to normality. Dr Ang is very pleased with my leg, and I am reduced to nine needles front, and seven back. That’s progress! 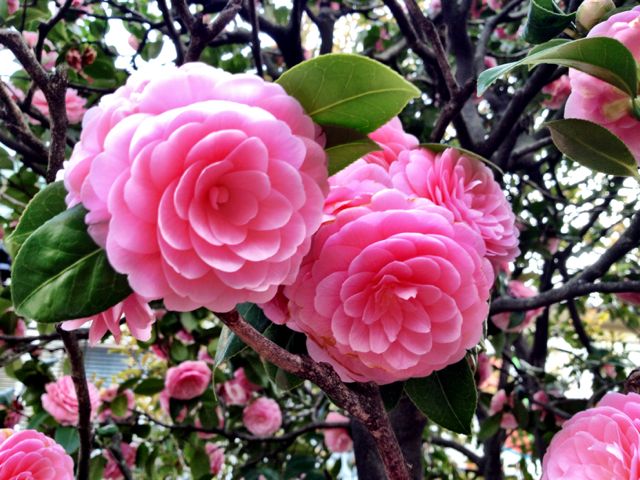 Camellias in the Senso-ji shine

Carp banners outside Tokyo Tower; carp is an auspicious emblem for boys

View from the Mori Tower, looking towards the Tokyo Tower, which I visited on my tour.

Lining up for the Palace

…and they keep coming!

Ladies posing in the park

Picni c in the park

Entrance to the Meiji shrine, built in honour of the first Emperor of a unified Japan,at the end of the 19 century

Weeding in the Hama- Rikyu gardens

Hama-Rikyu again, cherries and other prunus

Just wed, in the Hama-Rikyu gardens

The main shrine at Senso-ji

Wafting the incense smoke over you brings luck

Vegetarian Be nto on tour

Discerning buyer in the fish market

Fishy snacks – I bought a whole lot, felt safer than the fresh stuff!

Cherry blossom at night outside the hotel