I greet 2014 with renewed hope and vigour! 2013 played a very curved ball in injury time as up until November it had been a great year for us with the move to Singapore and all the travelling to exotic oriental places.

Only a few days left of mountain magic and then back to London, histology results and radiotherapy. Wah! And Ross departs for Singapore so I will throw myself on the mercy of all my dear friends to accompany me to physio and radio. A roster has been suggested. Volunteers please!

On the plus side the wound looks good. New Year’s eve saw me tackling the cable car and lunch at the restaurant panoramique at the top with the Mitchell family; not only great to see them but to get two consultations for the price of one: David is one of Britain’s top vascular surgeons and knows the Prof, while Anne is a GP, so lots of comfort about how the pain will be bad, it’s normal, and then healing will take up to two months. A peek at my leg in full view of the sunbathing crowds causes some raised eyebrows! 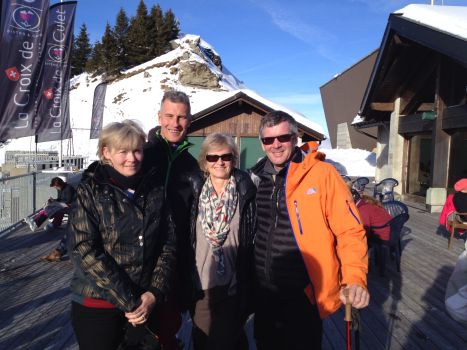 With Ann and David Mitchell at the Croix de Culet

However, this little expedition knocked me out and I had to retire to bed for a couple of hours; so exhausted that was fearful that I would not see in the New Year, which kicked off with apero for 25 or so chez nous…champagne and canapés, foie gras and sauternes, all brought by friends – Fenwicks, Poolers, Serikoffs, Huguette et al. My brother and his girlfriend who is having a little boy in May, are also here, and it has been wonderful getting to know Melanie and see how happy they are. New life for a new year.

Sasha flanked by Melanie and me on NYE

We tottered up to cousin Christine’s for main course: Diego and Diane have prepared hams, and Tommy and Olivia have made sweetcorn and courgette gratins, all delicious. It is a beautiful clear night and we stream out on to the balcony on the chimes of midnight as the sky explodes in a flurry of brilliant fireworks, which illuminate the Dents and rain down green, purple and red over the village. The beacons atop the peaks are lit and dominate the skyline as red dots. The sky is full of lanterns bobbing upwards.

Tommy with Christine and Katie Pooler

Then Ross, Tommy and Tom Pooler light our own Chinese lanterns, which soar up, up and away in an orange glow to meet Louise whose spirit is with us this night, in the mountain air and in the effervescent glow that lights up the sky. The stars twinkle down on us as we stand, me in my bare feet (kills the pain I say when told I’m mad), and exchange New Year hugs, kisses and warm embraces of dear friends willing this to be the year that I regain my health. If the power of positive thinking and vibes could cure cancer then I would be clear! So much love is humbling and I thank you, all my friends, for it and the support over the past couple of months and for those yet to come.

One of our lanterns winging its way to join Louise

I am sorry that the last blog sounded so bleak, but writing is part of my therapy, and like an exorcism…once captured in black and white the negativity is out of my system, leaving room for happier thoughts.

Let’s hope that 2014 is a year of health and healing for all of us, filled with the love of friends and family. 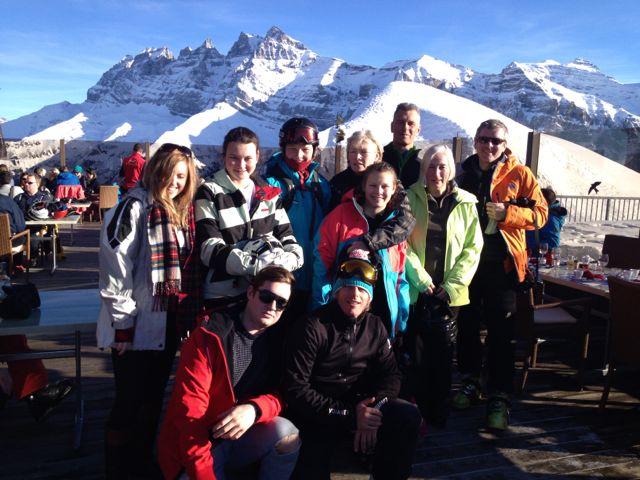 Finally the dreaded day arrives, and Dr Fi and I assemble to see the Prof. The past few weeks have been rather unnerving, not quite knowing, yet fearing, today’s meeting.

Dr Fi is in fine form: the Prof has been busy writing for the Daily Mail on why he believes the NHS should stop training women doctors (they go part-time and it results in fewer doctors etc etc). Red rag to a bull, but she promises to zip up as the meeting is about me…

The good news is that the Prof got the clearance, as in margin,  on the tumours, ie better than he expected. However, he confirms what both Fi and I already suspected, that it is a stage 3 and – here he brings his chair round the table and sits next to me, boy this IS serious – they found the tumour within a ‘large vein’.

Gently he explains this means it may have already travelled as tumour cells migrate via the blood. However, there is no point in doing anything until a scan in April as new sites will not show up until the cells have grown enough to be visible. As Dr Khong said, the cells are so microscopic at this stage, they are impossible to identify. So it is going to be a long haul. But I think I knew all of this even if I didn’t share the anxiety, so I don’t feel shocked, weak at the knees or nauseated. Just resigned and even more determined to live life to the full. As Prof says, we just have to hope that I will be lucky.

On the other hand, I am hugely cheered by his admiration of my mobility.  Him: ‘You can start going up stairs properly now.’

Me: ‘I’ve been doing that for 2 weeks already.’ I am doing far better than he expected. But he gives me a stern talk on being too ambitious as a fall downstairs (which I can’t manage yet, one foot after the other) would be dangerous.

Him: ‘Have we finished the medical bit now?’ Cue for media discussion; we always end our sessions talking about journalism.

Him: ‘ Did you see I had two articles in the Mail last week?’

Me: ‘No – these are the ones on female doctors I assume. I bet you’ve had some interesting feedback. I’ll read them and give you mine if you like, but I am a feminist you know!’

He gets all excited and writes out how to find them online; he slides the paper towards me, then deftly removes the duplicate and gives it to Fi: ‘Would you like to read it too?’

Fi: ‘No thanks. I promised Vicky I wouldn’t say anything as I am here in friend, not doctor, capacity, but I have read them and I disagree completely.’ There follows a lively exchange of views, friendly yet feisty as only Fi can be… Finally he asks Fi, ‘Do you know Penny? (another of the monstrous regiment of fierce women…and a good mutual friend of all of ours). This confirms that the Prof likes women like us, despite what he writes. He wants to keep me on as his patient: ‘I keep the ones I like’.

And now home, cat on knee, contemplating the long road ahead of living with cancer. Next stop: radiotherapy, first appointment Friday.

Dear friend Hilary and I on NYE

2 thoughts on “In which we greet the New Year with some good and bad news…but lots of hope!”