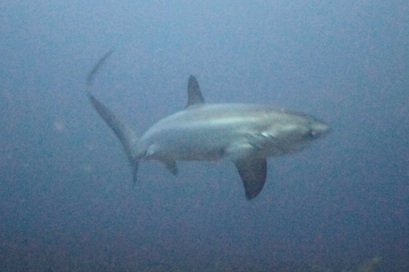 Thresher shark in the deep blue

Mabuhay! Welcome to the Philippines…here we are for a five day dive break to see the magnificent thresher sharks on Malapasqua island, which is 4 hours drive and boat away from Cebu City, in turn 3.75 hours from Singapore. 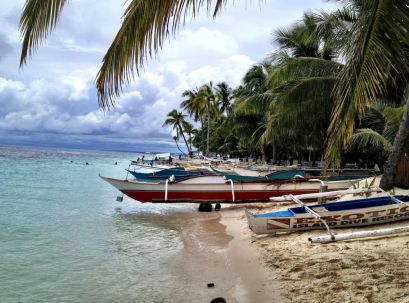 The hair-raising drive by local cab, dodging jeepneys (local shared taxis), motor rickshaws heaving with schoolkids, lorries and buses bearing down in all directions as we overtake incessantly and whizz down the wrong side of the road, brings back memories of being a teenager in Manila. In those days Manila was the murder capital of the world, and my Dad, being an unconventional sort of fellow, eschewed living in walled and armed complexes known as villages, instead choosing an old Spanish house in the red light district, Ermita. Closer to work, he said! 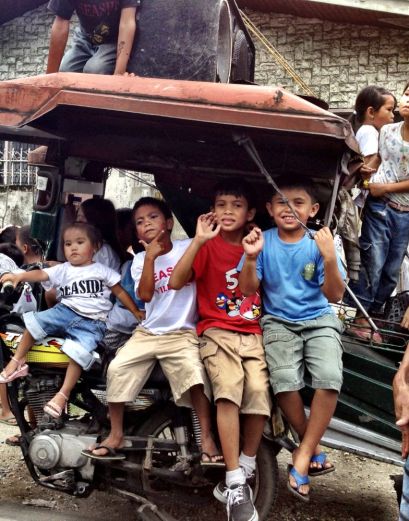 Cheeky boys crammed onto the back of a rickshaw

Spoilt 15 year old as I was, bored and neglected by my stepmother, and having no one to hang out with, I had a driver at my disposal to take me to get a tan at the nearby Army and Navy Club – a left-over from the American occupation during the 2nd World War – where I met my first serious boyfriend Alfred (yes, his real name!) Gonzalez. He was a heroic sort of guy, local DJ and man about town, always dressed to kill. I giggled to myself as I remembered the time we went on a family trip to Legaspi to climb the volcano and Alfred arrived in winkle-picker boots. My father was beside himself! My English accent was in much demand and soon I was making voiceovers for Alfred ‘s radio station: ‘DZeeRJ plays the MOHST music’. I bought my first bootleg album in Manila – Weird Scenes Inside the Goldmine and so began my third love affair  – with Jim Morrison. But that’s another story. 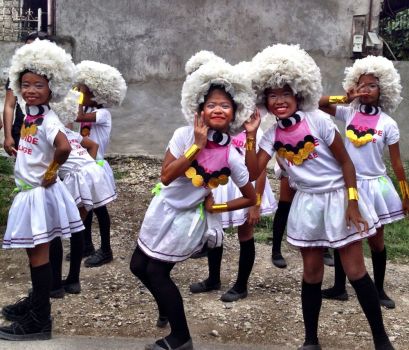 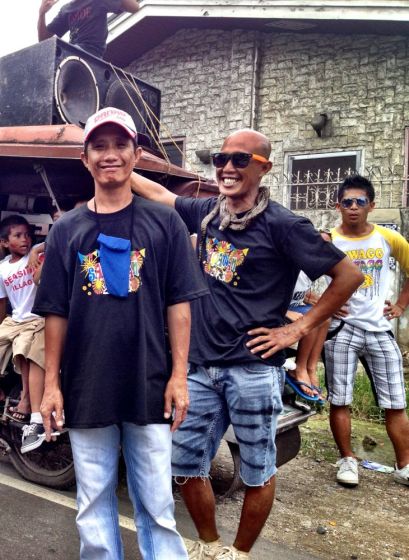 Jolted from my reverie as the car judders to a standstill and we are surrounded by scores of girls in carnival costumes, and big floats with speakers and dudes in leathers looking cool: we have hit the Ati Ati Ham festival in Danao City: Cebu is renowned for its number of religious festivals. The girls wave delightedly, and even the cool men break into a smile.

The countryside when we see it as we cross the spine of the mountainous Cebu island is lush and volcanic; there are paddies and huge industrial sized cane plantations as we drop down the other side. Churches everywhere, with sponsored posters and walls emblazoned with families’ names, denoting that the Philippines the Church is big business as well as religion.

We finally arrive at the boat jetty after our white knuckle ride along roads of strip development: people sitting on chairs outside makeshift shops, dogs everywhere, little markets in small towns heaving with mangoes, pineapples and crisps, fighting cocks for sale on poles lining the road – and pawnbrokers abound. This is a poor country, but every one is spick and span in clean clothes, even if walking through rubbish and mud. And Catholic, so babies and small children everywhere. 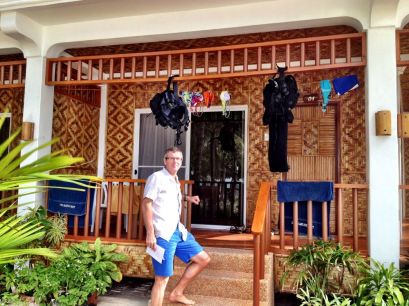 And so to Malapasqua itself, after a bumpy ride in a local fishing boat, narrow-hulled with outriggers on either side. The dive boats share this construction, and prove to be difficult to get in and out of as well as rather unstable in bad weather as we shall discover on our return journey, the morning after the biggest typhoon in the world this year, which devastated parts of main island, Luzon.

View from my room 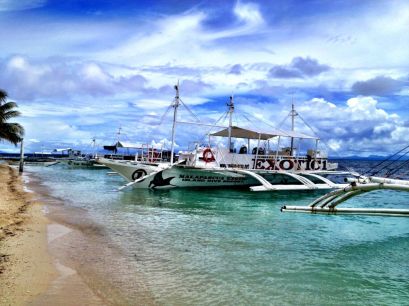 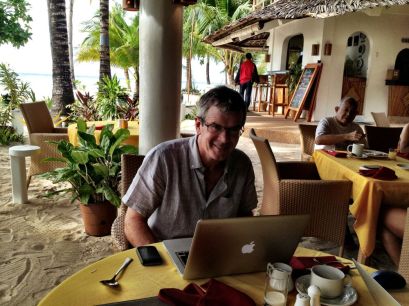 The Exotic Island Dive and Beach resort (good dive centre and confortable hotel with OK restaurant, good cocktails and San Mig – all you need really) is set at the end of a strip of white sand, lined with small hotels and restaurants. Seven years ago, there was nothing, and in seven years I reckon the whole place will have been destroyed by dynamiting and over-diving. 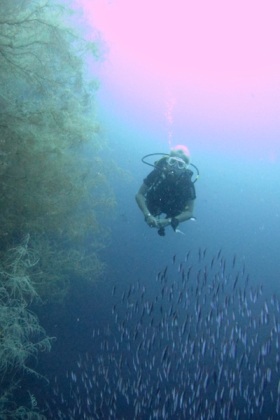 Me on the wall at Kalanggaman Islet

The thresher shark diving business is almost industrial in its execution: 4.45 am the first boats leave for the Monad Shoal and you disappear into the plankton-filled gloomy depths where you grab on to a line at 25 meters, like a little row of solders going into battle, and wait for the threshers to come to their cleaning station.

While horrified by the large numbers of people – at least a dozen boats with 20 divers on each – the sharks themselves who had obviously been paid to appear – are breathtakingly beautiful with their long whip like tails which they use to lash their prey into submission. They pass surprisingly close and fix me with a beady eye. I love sharks. Devil rays float by too, also availing themselves of the abluting services. 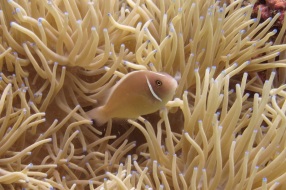 Pale clown fish with blue-tipped anemones, the prettiest things on the reef 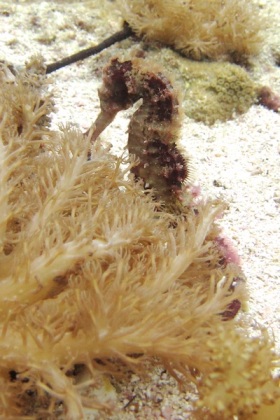 Traditional seahorse, the pygmies, size of finger nail, too small for Ross’s camera, and that’s a first! Failure, I mean!

As for the rest, apart from some good seahorse and frog fish sightings and some lovely coral gardens, it was perfectly pleasant, but some of the dives were simply rubble and new soft corals and anemones struggled to get a grip. Fishes there were none larger than 10 cms – all blasted into extinction – so we became experts in spotting critters: tiny shrimps, crabs, worms and nudibranchs, some no bigger than half a finger nail. Lucky I had my new lenses put into my mask so I could actually see!  Not forgetting the sea-snakes as Gato Island is a sanctuary (haha, no guards and plenty of people fishing with impunity in the sanctuary boundaries). Check Ross’s website for proper photos of the fishes http:// 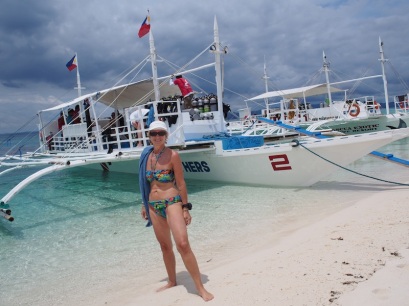 Me getting ashore for out picnic and a welcome loo stop!

So I surmise all the seafood on the menus is imported and frozen. Stick to chicken and pork. We at least saw those, including a whole pig being feasted on at a family picnic on Kalanggaman Islet, where we stopped for a rather poor BBQ lunch in-between dives. 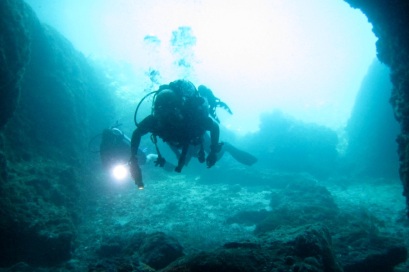 A swim-through on the otherwise devastated-by-dynamite Gato island – yes it’s me again!

Our buddies were truly cosmopolitan though biased towards Singapore as it was the Singapore holidays. Lots of jolly, noisy Chinese; more taciturn Koreans and Japanese; Spaniards, French, American, Swedish, Ozzies, Brits, and even a lone Chilean! 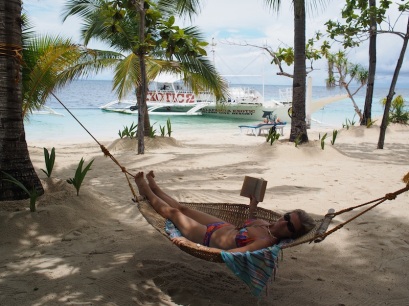 Well, you come all this way to chill in a hammock of course! 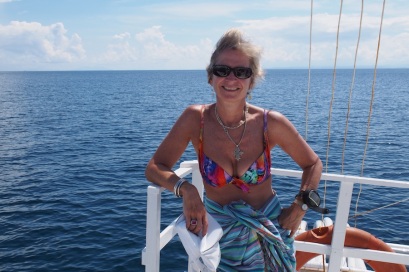 Life on the Ocean Wave!

I thought it a long way to come for many; for us a quick flit from Singapore (is 11 hours quick I ask myself?) makes it a worth-while mini break, but after 4 days’ diving I was ready to come back; and in fact due to the typhoon the dives were cancelled the day we left, so we timed it well!

Oh and Mao’s Revenge morphed into Marcos’s Revenge: if sight-seeing with clenched buttocks is hard, then try diving and all those pressure changes. Wah! 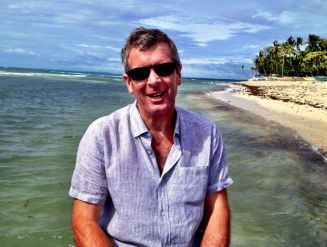 Ross on the last morning – the sun is briefly out after the typhoon of the night before; but the waves were big on the way back 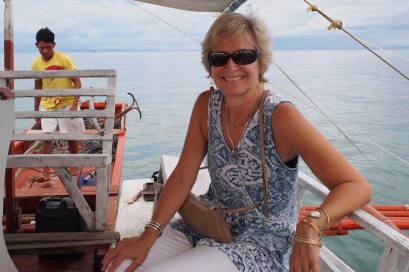 Arriving on day one – before Marcos’s Revenge struck!