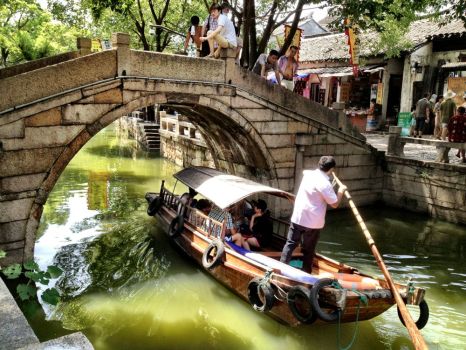 Tongli- the Venice of the East

A Water Town! Sounds like a way to cool off in 40C..so we thought!

Still suffering from the Shanghai tummy trouble, we wisely opted not to take the train and then a bus to Tongli, chosen for it being more inaccessible and hopefully less full of tourists. Ross’s ingenuity secured us a local taxi for one quarter of the cost of taking a tour, so we set off with Jess at a civilized 9.30 am.

It’s too damn hot – 40C, but we pose like Chinese for our photo with the ubiquitous peace sign

Like us, she had never been outside Shanghai, and we were pleased to see open countryside, with paddy fields and fish farms lining the roads, interspersed with high-rise apartment blocks and luxury developments. Not surprising really as the Water Town area was where ‘due to charming environment and abundance, in ancient times, many noblemen and distinguished families built their private gardens…low bridges, running water and small villages has won its fame as Venice of the east. All these make your trip full of poetic and artistic imagination from the moment you arrive here.’

Jess and Ross in the Tusi Gardens

So said the local guide. And it was true. After queuing for a little shuttle, ‘driver having lunch, she come when finish’, we arrived in the walled town, which at first glance looked rather tourist tacky, lots of shops selling tat and rickshaw wallahs touting for business. But once you left the main streets and wound round the back, life here is probably much as it was a century or two ago – small little one/two storied stone houses with little courtyards, or small gardens. People lolling around inside in the heat, cooking smells lingering in the fetid air. A small breeze just about ruffles your hair on the numerous bridges that cross the canals. 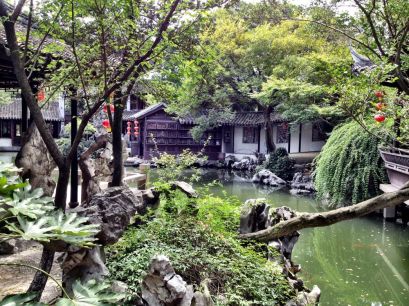 We enjoyed the formal coolness of the Tusi gardens, and made our first tourist purchase, an exquisite and intricate paper cutting of a pair of carp, in blue – bought from the artist. 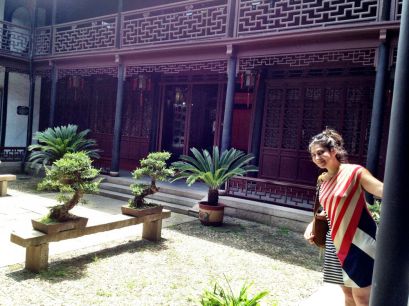 A visit to the Chinese Sex Culture Museum is a must, especially as Jess’s friend Andrea had interviewed the owner for a news piece…in fact it is more culture than sex, although there are some magnificent phalluses on display. A Chinese boy sidled up to me as I was

admiring one. ‘You like?’ he whispered in my ear.

Another fine old mansion was host to a museum of Qing dynasty beds – all exotically carved teak, the Moon bed especially designed for ‘conjugal bliss’. Hmm, I’ll have one of those, says Ross.

We made a bad error over lunch spot, but we were so hot. Literally drenched through from top to toe (yuk!) that, instead of continuing along the canal, where we later saw some waterside cafes complete with electric fans, we made our way to the main square where we found air con, a beer, and the most repellent greasy rancid dumplings I’ve ever seen, plus some lurid pumpkin buns…Jess stuck to the cucumber, Ross ate the dumplings, I drank the beer, no one ate the pumpkin! 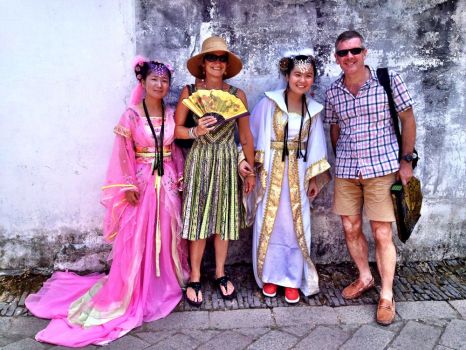 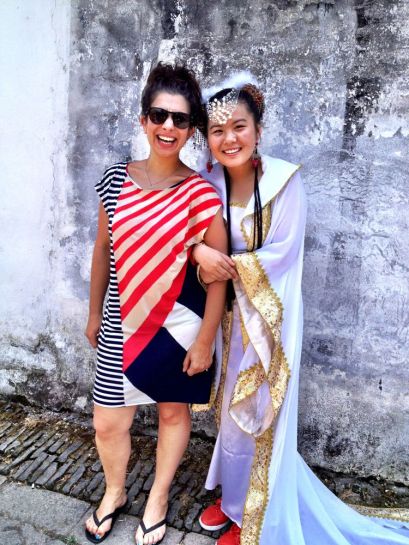 This girl had never met a foreigner before…

After lunch we met some gorgeous girls all dressed up in local Disney Princess outfits aka local traditional dress – hot synthetic gowns with long sleeves and frills, in garish colours, all having their photos taken. More than happy to be photographed by and with us – one girl told us she had never met any foreigners before; her friend spoke impressive English for a girl from the provinces. None of the pretty girls, posing for their friends, minded being photographed either. Ross is now building up quite a collection of Chinese beauties. I’ll have to watch him. 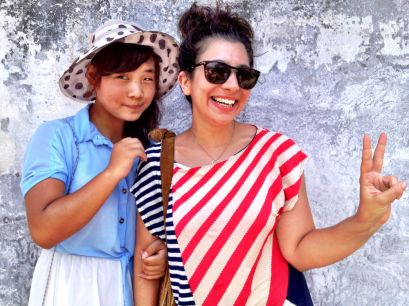 Jess and her new friend, who spoke passable English 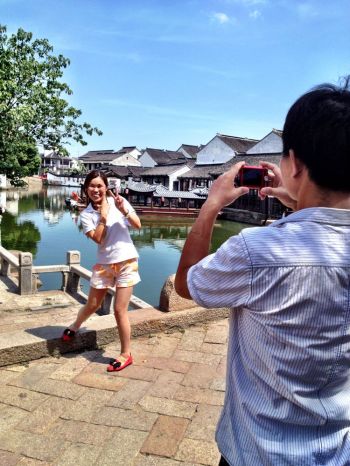 This couple were enjoying all sorts of strange poses

Cool it was not, but a fascinating day out. We saw only one other group of laowai (foreigners) the whole day; and it really wasn’t that crowded so our planning paid off. I rather like that the Chinese (and the Malaysians and the Singaporeans and the Indians) are all such inveterate tourists in their own countries. I suppose their lands are so vast and varied that it makes sense. Why go abroad if it’s all on your doorstep?

A Selfie of us all, true Chinese style! Love you jess!