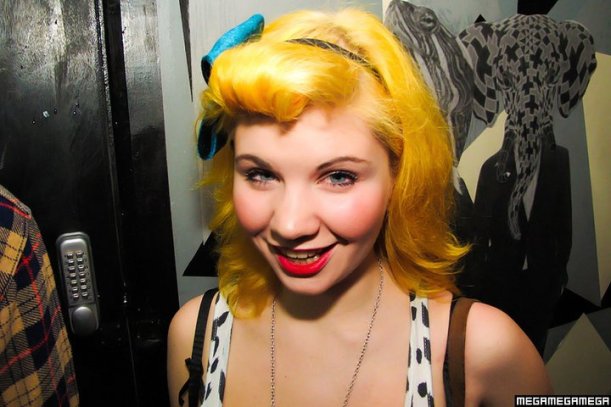 Preparing for hula-hooping at Lovebox, summer 2010

This is now the fourth time that we have had to experience the worst day of our lives: the day that Louise, our beloved daughter, died.

END_OF_DOCUMENT_TOKEN_TO_BE_REPLACED 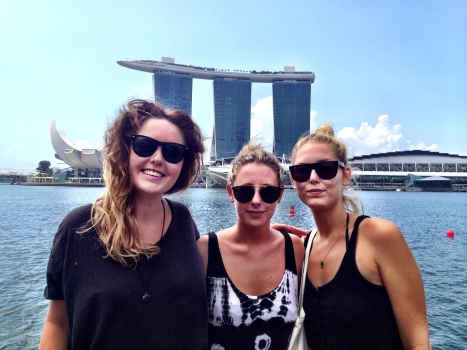 Arrived back from Mumbai to very welcome news that two of Louise’s  school-friends, Kim and Charlie Sachs and their friend Sarah Johnstone would be coming to Singapore en route to Vietnam for a few days. 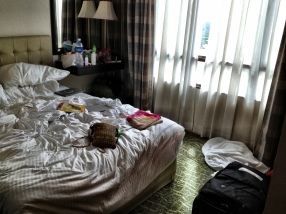 our tiny second bedroom, home to three girls… (mattress on floor only comes out at night!)

Of course they must stay, even though our tiny serviced apartment only has a minute spare bedroom.

When they arrived we also met  up with another London friend, Andy (our age!), and had a delicious Chinese meal – after several pink gins, as taught by Mumbai friend Cindy (half/half soda and tonic water with the gin and bitters). 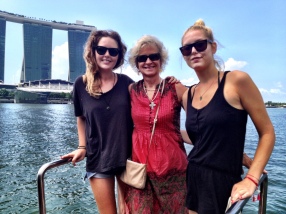 with Charlie and Kim on the bum-boat tour (had a had cut after I saw this!)

The second morning we walked down Robertson and Clarke Quays to pick up the bum-boat to do the river tour of Singapore; grey day and windy….wah, my hair! 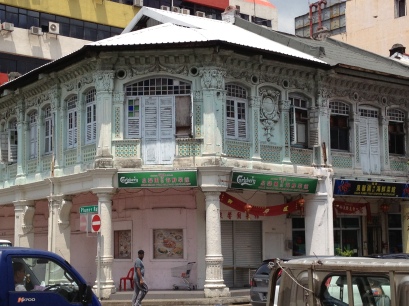 Then off to Little India, where I had never been. Going from the real thing to the Singapore version was a great disappointment: firstly there seemed to be more Buddhist than Hindu temples, and more shops Chinese than Indian, apart from right at the end when I discovered the food market (by the MRT station.) Now I know where to get fresh curry leaves, alphonse mangoes and baby aubergines. 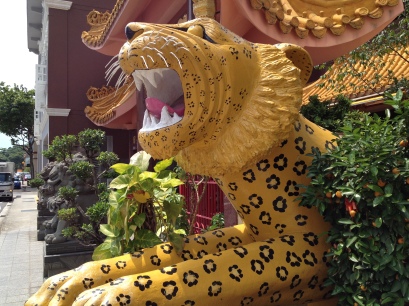 Lovely leopard (?) outside a Buddhist temple in Little India

Nevertheless we had a good lunch – a thali for me, and veggie lentils for the girls – and enjoyed the 24/7 hypermarket full of tat. 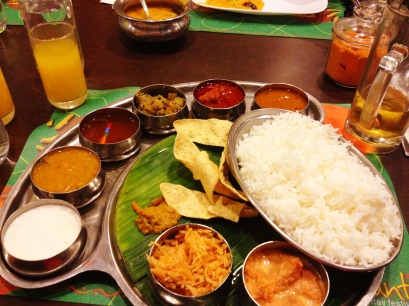 Interestingly we followed the Lonely Planet foot tour and, now, checking some names in the Footprint guide, it seems we missed out on a whole load of more authentic stuff. Will have to re-visit.

So while the girls were doing their own thing – a chum of theirs’ is in town for Singapore fashion week, a hunky male model, and I have sworn not to share some of their photos but can attest that Singapore is not quite so sterile as one might be led to believe judging from the evidence – and Ross was over the border in Malaysia, I went out with Andy for a yummy Chinese in the Goodwood Park hotel; Peking duck as it should be. Andy particularly liked our gorgeous waitress! 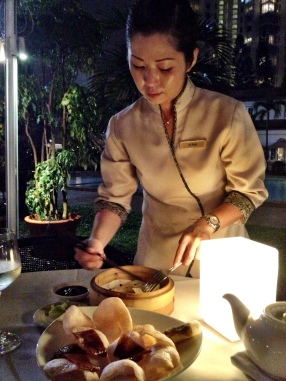 Peking duck – hand-rolled pancakes, thank you – using only crispy skin. The meat is fried up with rice and spring onions

A vist to Singapore is not complete without an outing to our new ‘home from home’ – the Tanglin Club, where I took the girls for drinks and dinner – to see how the other half live. We had a lively discussion with one of the ‘old-timers’ about the glass ceiling and the need to give parents tax breaks to stay at home. ‘All children should be brought up by at least one parent – being brought up by a nanny is a great disadvantage.’ ‘Do  you have children?’ I asked innocently – for dear reader, this was a woman speaking. I only found out later that David Cameron has being banging on about this – so it was neither original nor enlightened thinking! Small society can addle the brain.

So goodbye to the girls and to Singapore – we venture to Taipei tomorrow for a week.