The KaiserHaus, where my grandfather Hermann Ungar was born and the most imposing house in the Jewish quarter

We set off early for Boskovice. The drive takes us through gentle undulating hills, with verdant pine forests adorning the hilltops like crowns. Once off the main road, we pass a cart pulled by two handsome palomino horses with a pony trotting alongside and we are in countryside that looks much as I imagine it would have done in my grandfather’s time. Now there are fields of lavender pyrethrum, green wheat and yellow rape, all contrasting with the azure blue of the sky. It reminds me of Ungar’s story The Brothers which describes such a landscape. 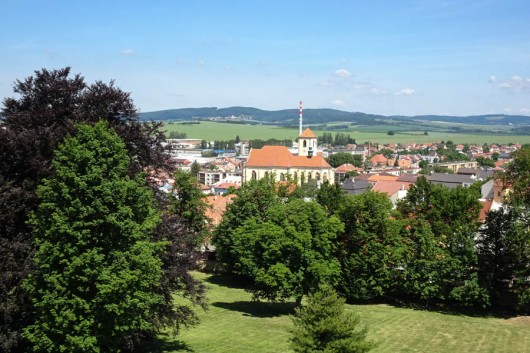 View of Bokovice from the Chateau 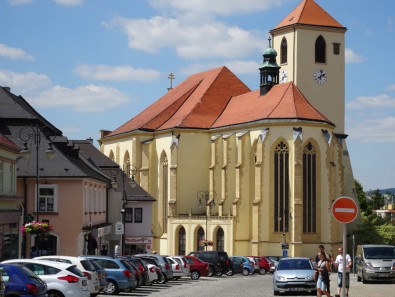 The Church in the Christian quarter

The town hall and museum

After a quick lunch in the local inn (not in the Jewish quarter so not one of the old family ones) we meet Jaroslav Klenovsky, the leading academic on Jewish synagogues and graveyards who is to be our guide. He talks us through the renovations to the spectacular Boskovice synagogue, only recently restored back to its former 17th and 18th century glory – the beautifully decorated ceilings, with plants, birds, liturgical texts and prayers, all very unusual, were painted by Polish refugees from the pogroms who came here.

Bonnie outside the synagogue 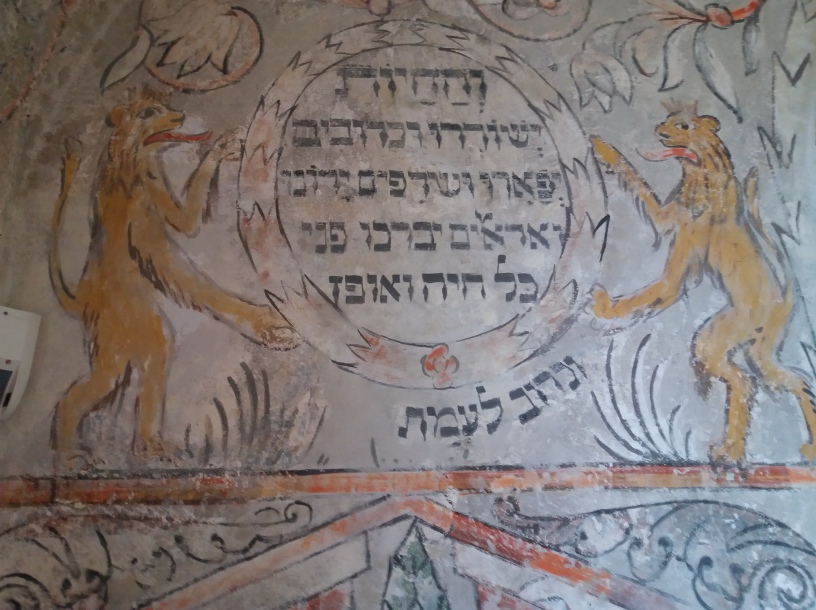 These original paintings were only revealed in the 1990s by the restorers as previous orthodox Jews had whitewashed over the sumptuous murals, thinking them too fancy. The synagogue escaped being destroyed by the Nazis as it was used as a store for all the looted Jewish property. There is a memorial to the Boskovice Jews who were deported – including members of the Ungar family –  our great uncle, his wife, their two young boys and our great grandmother. 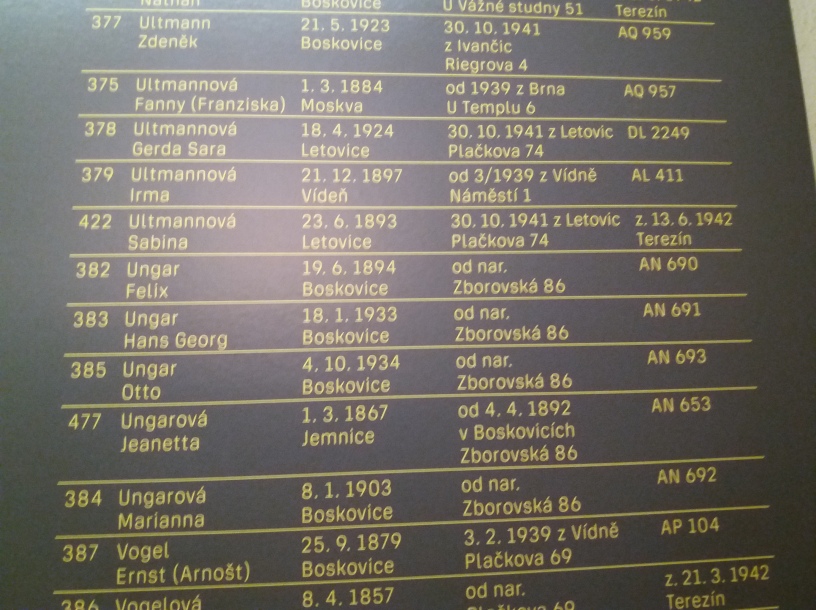 While at the synagogue the deputy mayor swooshes in with a delegation of senators; sadly she is too stressed by her visitors to pay too much attention to Hermann Ungar’s granddaughters although she immediately begins to chat to me in German. Another time we will make an official delegation, says Julius.

Outside the Biach/Ungar house where Felix and his wife lived and where my father often stayed as a boy. Here was the Ungar distillery

Inside the Biach?Ungar house, now a bookshop (no Ungar). It is preserved as it was before the war.

Everywhere are plaques and reminders of our grandfather although the young people we encounter seem to have no idea who he is and there are none of his books in the bookshop named after him, opposite the Kaiserhaus! At least Julius finally manages to find a collection of Ungar prose in Czech, translated by scholar Jaroslav Bransky, whom we visited last time and who remembers playing with our father as a boy. Sadly he is too ill to see us.

The old fountain square, or Brunnenplatz 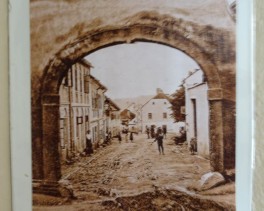 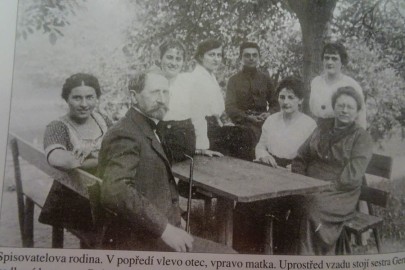 But the real highlight of this visit is Bonnie’s news that the Boskovice Torah is now in her synagogue in Bethesda, Maryland. After the war over 1600 Torah scrolls were rescued and brought to Westminster, where they were restored and then distributed throughout the world. The extraordinary coincidence that the Boskovice one ended up in a far-off city where the Ungar diaspora live is uncanny. 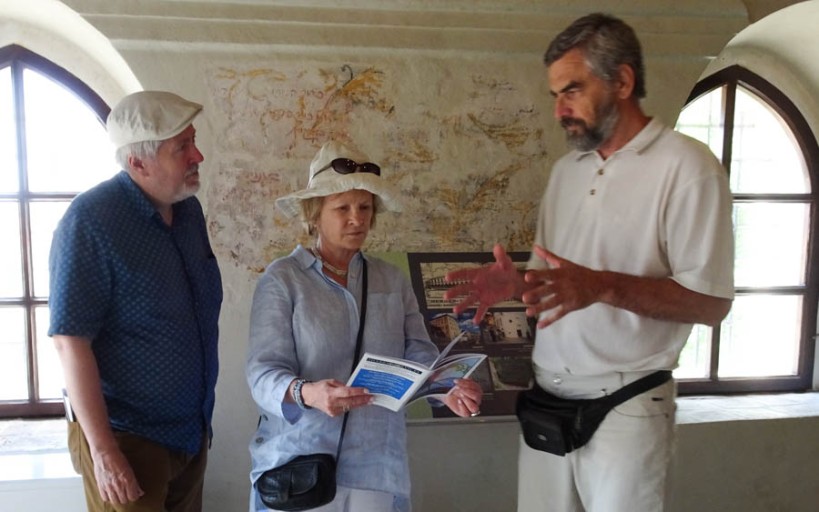 Bonnie’s son had discovered this at a service where the Torah’s history was revealed in a booklet and it mentioned the name Hermann Ungar. Bonnie had brought this booklet with her and presented it to the caretaker to be displayed alongside other memorabilia including Herman Ungar Snr’s slivovitz jar! 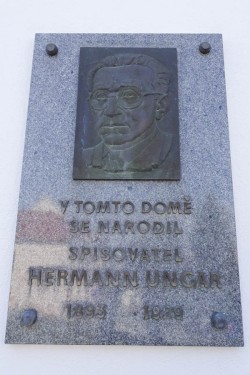 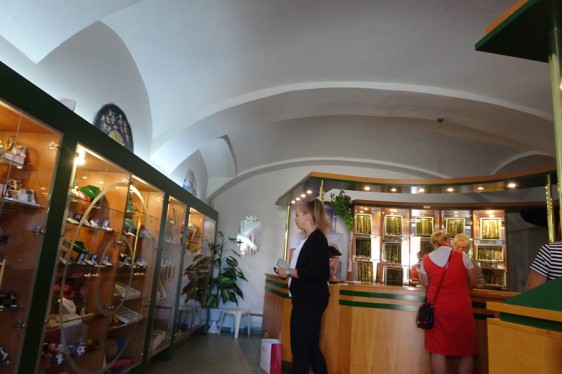 Inside the KaiserHaus, now a jewellery shop!

The slivovitz jar in the synagogue 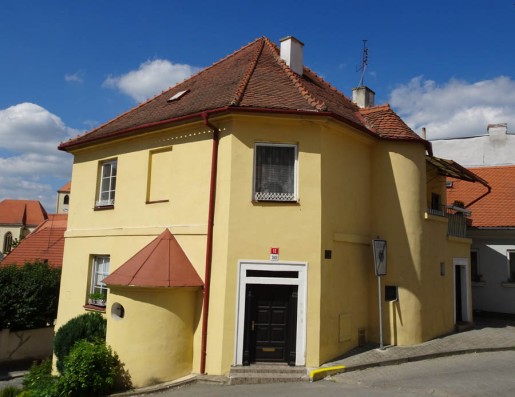 Julius says Israel Ungar (1803-36) lived here, although it is now known as the Eisler House

A plot has been hatched for the Rabbi in Bethesda to bring a congregation – and maybe even the Torah – for a visit.  This would be a most memorable outcome for all concerned.

A former grain trading venue and later a clothing factory 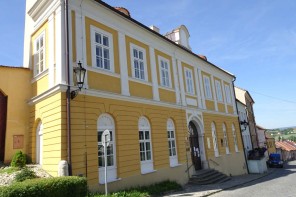 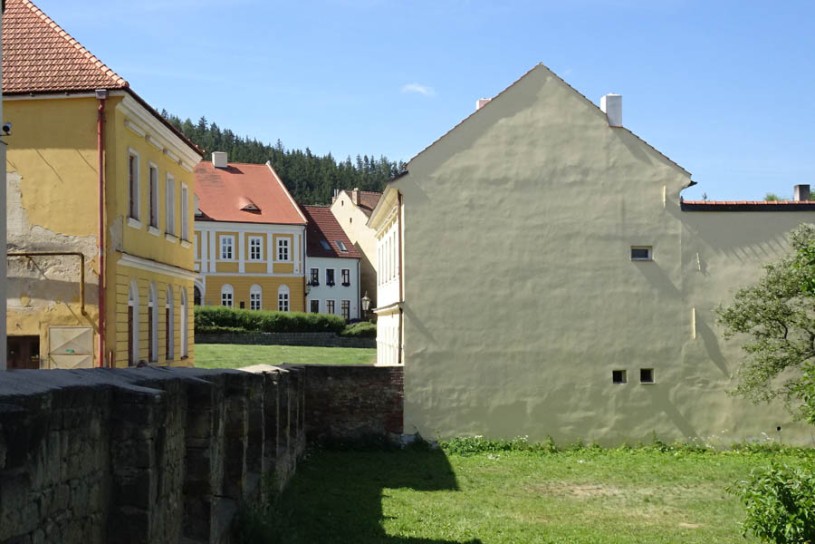 Gaily-painted houses in the Jewish quarter

After the synagogue we amble through the pretty old  Jewish town, with its cobbled sreets and pastel coloured houses to the cemetery, where luckily Klenovsky is able to point us to the impressive family tombstones: Herman Ungar Snr and his wife Jetty; and his sister Franny Totis. Julius reads us the translated Hebrew inscriptions from the tombstones, both very charming. They were obviously pillars of the community. We were unable to find Marcus Ungar,  Hermann Ungar’s great  grandfather and the first Ungar to get into the distilling business and make the family fortune. Likewise Emil’s grave was not to be found – he died just before the transportations and his grave is unmarked. 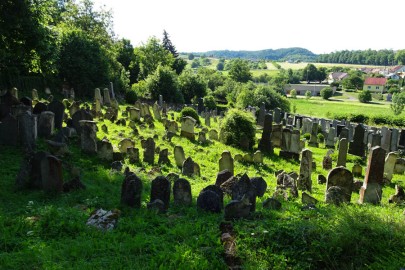 Bonnie and me by Hermann Snr and Jetty Ungar’s graver 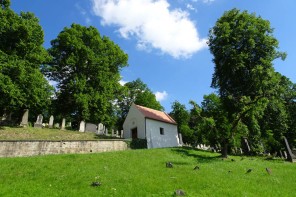 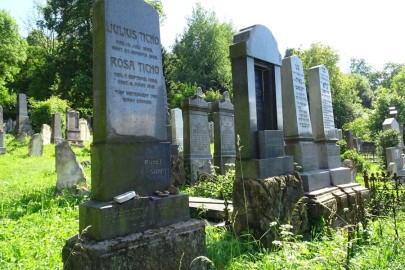 One of the Ticho graves

Julius had thoughtfully brought us yeast tablets as the hungry ticks that live in the long grasses are averse to it –  tick bite fever is a real danger here.

looking past the bathhouse

Shops next door to KaiserHaus 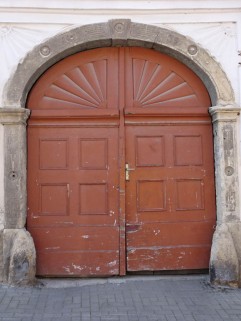 Bathhouse with Cathedral peeking through 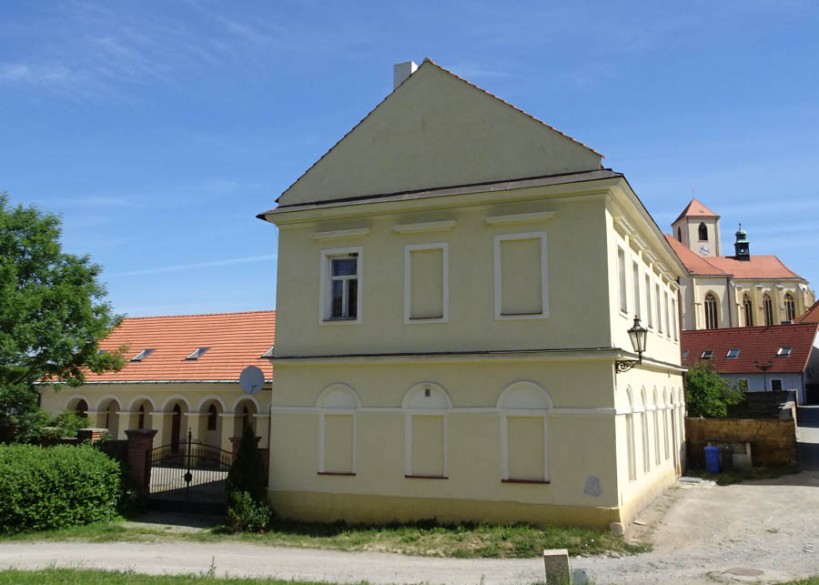 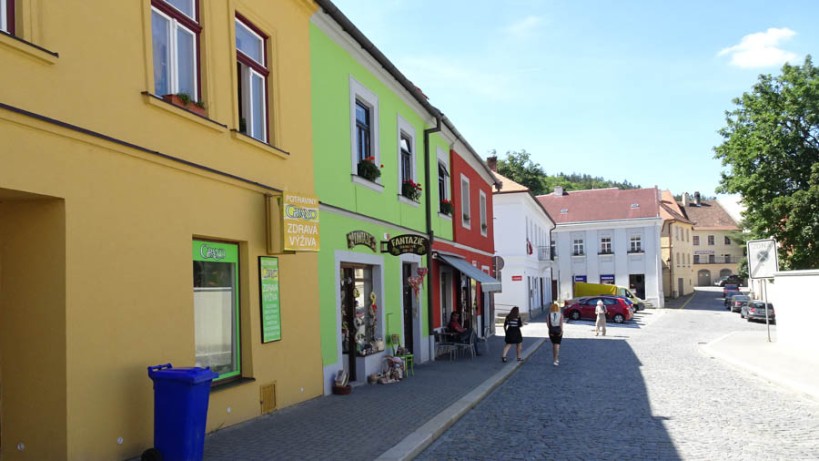 The street leading from the new town to the KaiserHaus, sideways view with red street sign

He left us to return to Prague so Bonnie and I spent a quiet evening in the local old mill converted to a hotel. The next day we wandered around some more, identifying all the houses where our relatives used to live, visiting the Empire chateau where great-great-grandmother Jetty taught the Countess Mensdorff-Pouilly, whose descendants still live there today. There was a bustling market in the new town square, where we bought a few odds and ends, before taking a taxi to the nearby station of Skalice to catch the train back to Prague. Like Swiss trains, it runs bang on time. 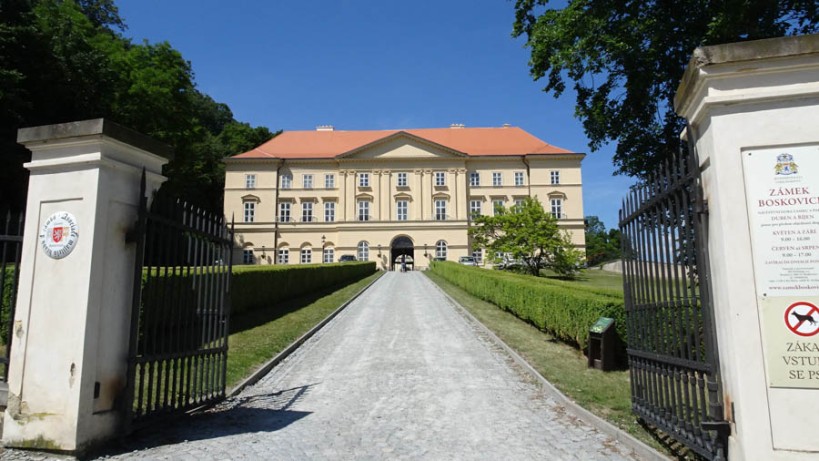 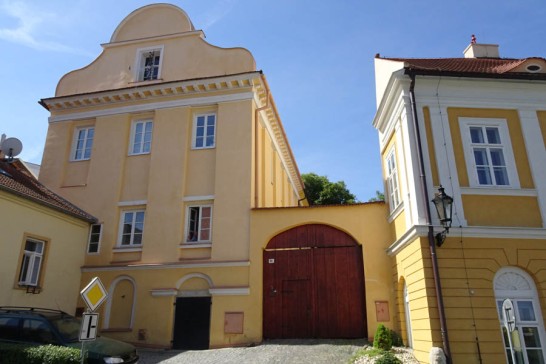 The Popper house which housed a shoe factory until 1935

What I love most about travelling is that, even on re-visiting a place, there is always something new to discover. With the help of Julius and Jaroslav Klenovsky we added more stitches to our family tapestry.

6 thoughts on “Boskovice: town of the Ungar ancestors”