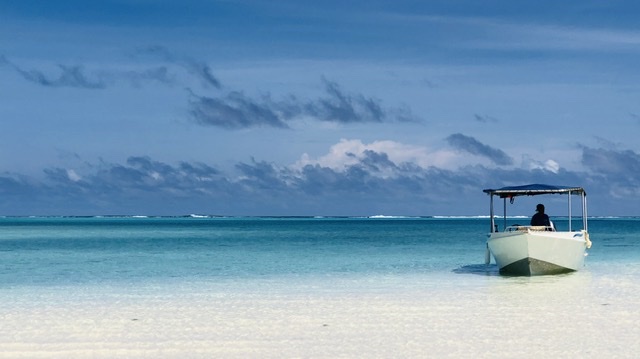 The howling wind wakes me. It is midnight and we are in Aitutaki the second largest of the Cook Islands with a population of 2000; you can drive round it in under an hour. On our arrival in Rarotonga we were warned that they are expecting a humongous storm, just downgraded from a cyclone. They were battening down the hatches.

So here we are in Aitutaki, a short 40 minute hop in a sturdy Saab turbo prop, for our four days of tropical island paradise, to dive, to snorkel and top up our tans. But it doesn’t look hopeful.

It is raining so hard that drops penetrate the glass louvres and land on us in bed! Our hut is on stilts right on the beach and is groaning and shaking as the waves crash on the reef, with the larger ones breaking over the wall and swirling round its legs. It really is scary being in the middle of nowhere in a mini-cyclone. We hear from an old boy on the beach who barely speaks English (interesting in itself) that the more frequent cyclones disrupt the boats that bring important supplies to the island, not just foodstuff but, most importantly, fuel. These are worrying times for the islanders. 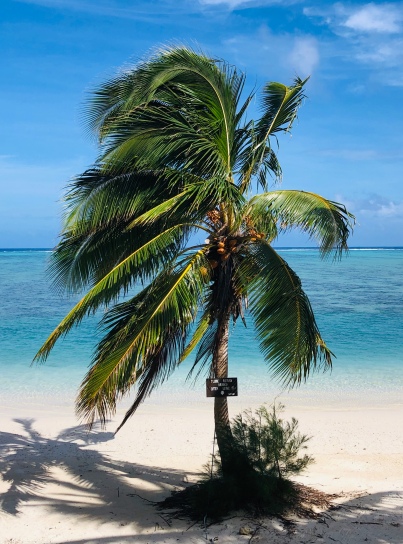 The same tree in normal weather
By morning the wind has abated somewhat though there are fierce downpours. Undeterred we don our rainproofs and tootle round the island on our hired scooter. We have a bird’s eye view from the 124 ft hill – this is a volcanic island rather than an atoll, as is Rarotonga which has some quite high central peaks and only one footpath crossing the island  – and can see how in good weather this would be idyllic: even now the tropical lagoons are a brilliant turquoise.

The Ootu lagoon as the storm gathers

View from the ‘mountain’

View from the ‘mountain’

View from the ‘mountain’
It is also richly fertile and the houses are scattered along the roadside, goats and pigs tethered nearby, with the occasional field full of yams, taro or cassava and fruit trees.  We are amused by the contrast of the manicured lawns and verges that surround the rather ramshackle homes. During the storms we  watch for the weather break and sortie for meals; occasionally we get soaked. The wind is much less strong away from the beach.

This guy drove by every morning – note his big trevalli

The eye of the storm – colours still great

A rut Aga – the ‘capital’ of Aitiutaki
As in big sister Rarotonga there are several churches of all denominations, the largest being the Cook Islands Christian Churches – the oldest is here in Aitutaki, founded in 1821 and completed in 1828. On Sunday in Rarotonga the singing can be heard as we pass. But there are many Mormon and Seventh Day Adventist Churches which we saw all over the Pacific islands. In French Polynesia the Catholic church is the biggest naturally. Our day in Rarotonga is wet and overcast, but luckily we have an electric car – an experience in itself. 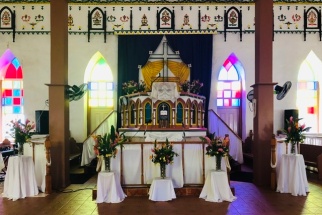 CICC church in Rarotonga on SUnday

Breakfast at MAgiv Reeg bungalows in Rarotonga
Here in the Cooks, and especially in Aitutaki, the islanders like to keep their loved ones close,  even in death. Ornate graves decorate many a front garden; my anthropological training guesses this is a throw-back to the old pre-Christian ancestor worship that held sway in Oceania. Certainly in Papua New Guinea and other parts of Asia, whence the Polynesians came, ancestors played an important part in day-to-day life, and still do in many cultures. See Ross’s historic perspective on the Cook’s – and Polynesians – settlement.

The dead are always with you! 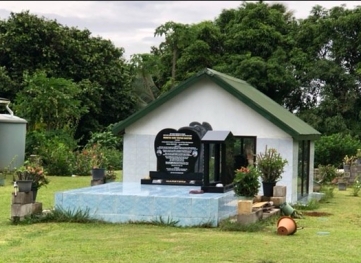 The dead are always with you! 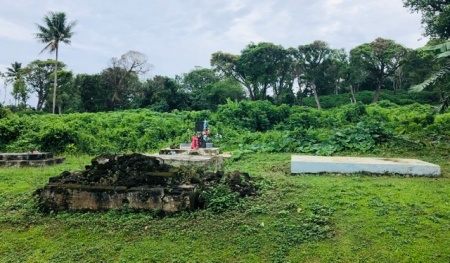 The dead are always with you!
In our basic but comfortable Paradise Cove Lodge we are entertained by the resident cats and as, everywhere in these islands, chickens. Here five cockerels squabble noisily over one scraggy hen; the chickens are everywhere ranging from the departure lounge where they fight over bits of discarded toast, to the runway where they peck around with abandon. 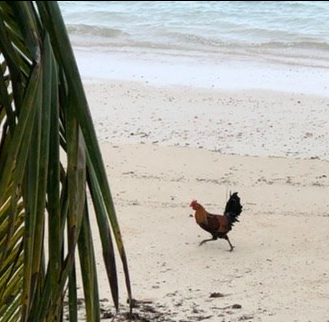 There are no dogs (but plenty of cats) in Aitutaki, unlike Rarotonga, where the number has been reduced from 6000 to 2000 by an organised neutering programme – even so they run around the beaches in packs and befriend tourists. I guess its easy to control pests in such a small country – 15 islands of only 240 sq kms and 18,000 people. More Cook islanders have emigrated to Australia and NZ, whose currency and influence still hold sway here, than have remained. 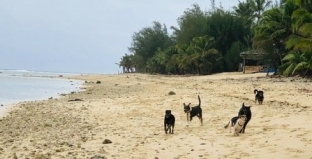 On our last full day we awake to sunshine and clear skies. The fabled lagoon trip is on! Finally we see what all the fuss is about – the sea is variations on the theme of turquoise and the snorkelling and lunch are good too! 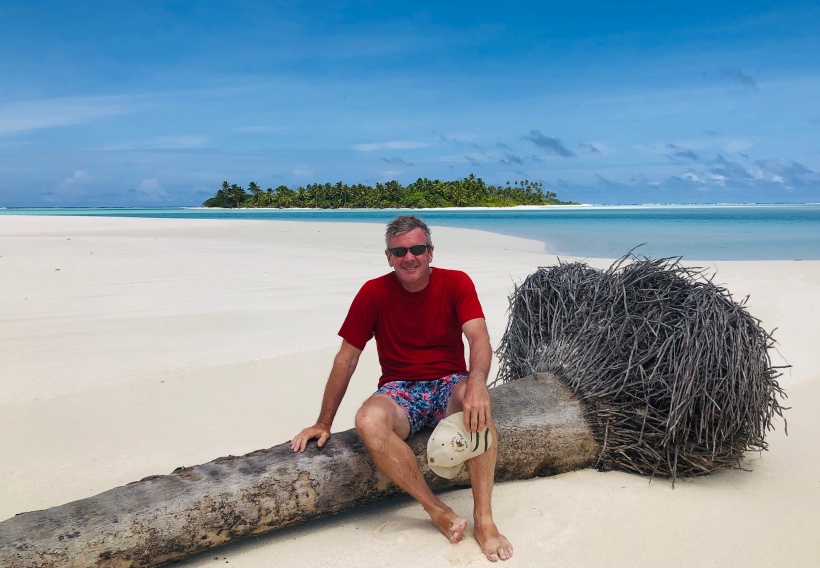 Our skipper Teking (self-styled king of the islands) is knowledgeable about the reef and the island’s history, although we disapprove of his turtle capture so that tourists can get a picture holding one. Much of the coral has died due, he thinks, to the dousing of the island with pesticides during its heyday as a major agricultural exporter to New Zealand. It seems plausible to me. Nevertheless there are some fabulous clams, giant trevallies – about 3 feet long – and some unusual purple brain corals. We see the dock for the old seaplanes of the 1950s which landed here. 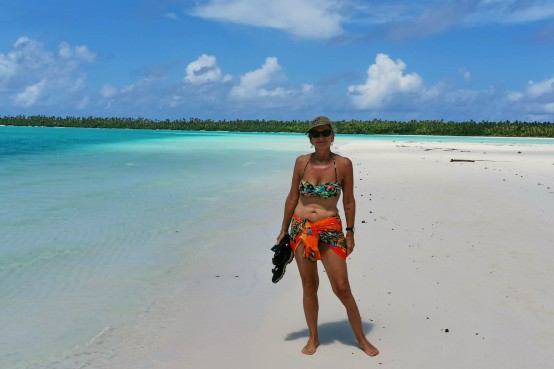 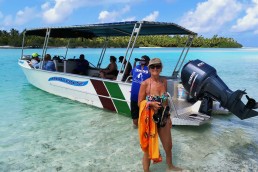 Red-legged tern on its nest 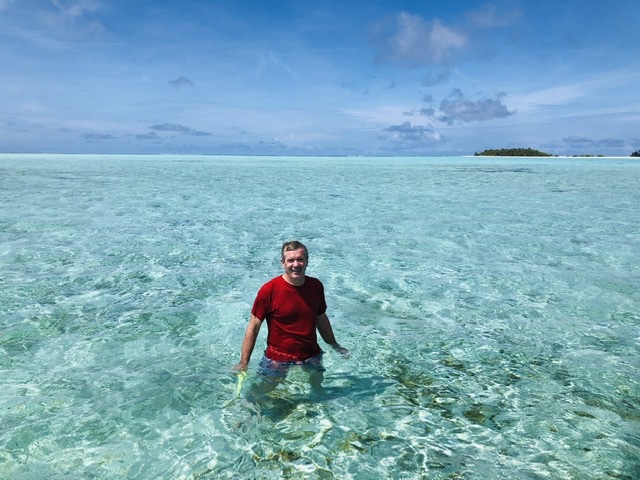 Look at the colour of that water!
No visit to the Cooks is complete without an island night of traditional singing and dancing. Normally I abhor these but here I am captivated by the dancers of all ages revelling in their heritage – the seductive hip wiggles of the grass-skirted girls  (as young as nine and slim, in contrast to the older ladies) with their coconut bras, and the energetic knee-shaking boys and men – all smiling broadly and enjoying themselves. In an island where many young emigrate it’s wonderful to see traditional culture being handed down.

All too soon our island sojourn is over, and we are heading for Columbia via LA. Our trip to Oceania started before Christmas and has been fabulous. We have dived all over, travelled through spectacular countryside, stayed in remote places, met up with friends and, perhaps best of all, are still talking to each other! I guess after 36 years of marriage it’s not that surprising, but several people wondered how all that time together would go! 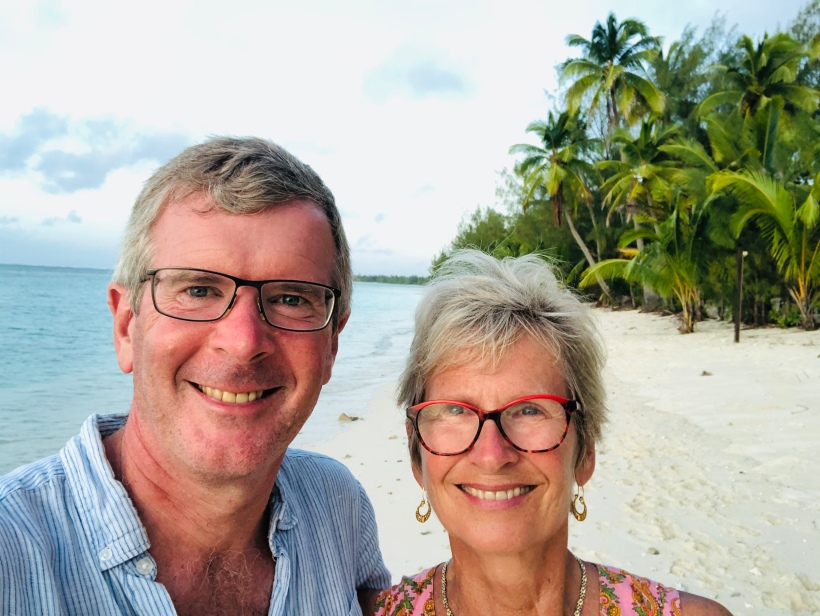