Swimming with a whale shark – you get an idea of how huge they are! 5m…

‘Humpies! Fins on’. We are aboard the 40ft fishing boat Live Ningaloo on a mission to swim with humpback whales. We are surrounded by pods of them on their annual migration from Antarctica up the west coast of Australia to breed and give birth in warmer waters before returning south for the Antarctic summer and their feeding grounds. Extraordinarily they do not need feed on their migration.

A pod on a mission 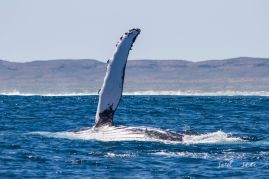 The pod that the spotter plane has targeted for us surfaces majestically, like huge dolphins, showing their enormous backs; then there’s a spume of water as they exhale. All around us we have been watching these magnificent mammals as they breach, head first torpedoing out of the water before falling with a tremendous splash; sometimes accompanied by a massive tail crashing down.  This pod has been chosen as there are no calves – never disturb a mother and baby in any wild situation, something we all know from our Africa days.

Murray, the Zimbabwean skipper – thrilled by my Mana Pools cap, his dog is named after his ‘favourite place in the world’ – lines us up; we all slither along the marlin board, a shelf at the back of the boat, and sit legs stretched out, fins at 90 degrees fighting the roiling sea as the boat charges full steam ahead. The whales have dived and we wait until they surface again to try and get our position. There are four of us swimmers from our camp, Salsalis, Graham and Helen (who had also lost a daughter, so we had a bond, plus Graham had multiple cancers and is fit and well 20 years on!), plus Candice, one of the managers, and the crew consisting of Jana the photographer, and our guide, Nat, the marine biologist. We have been drilled in swimming dos and don’ts – they are after all 19 meters plus of blubber and muscle – and are poised and ready.

with Helen and Graham on teh boat

Fins all in a row ready to jump! 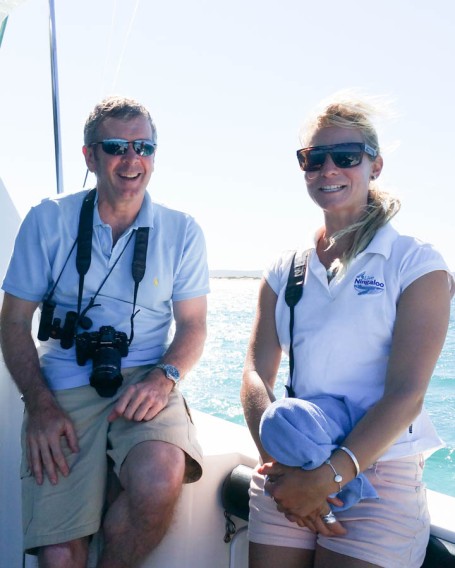 Ross chatting to Jana, the photographer

Candice getting zipped in!

‘Jump!’ shouts Nat and we are suddenly in the middle of the Indian Ocean, nothing between us and Africa except sea. We swim frantically following Nat’s lead but the whales have disappeared. As we look down, two ghostly shapes loom like silent submarines 20 m beneath me, and vanish as silently as they appeared. 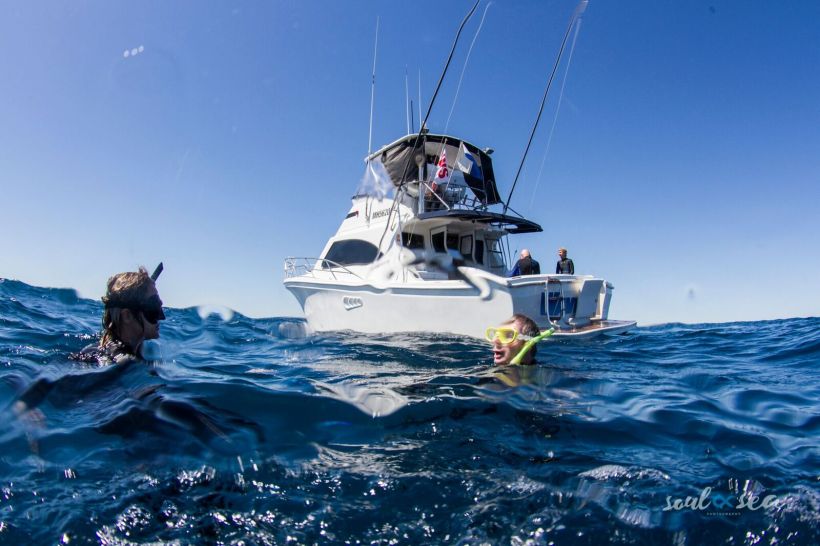 This is as close as I get to swimming with the humpbacks. It’s the first year its been done here, and is something of an experiment. We discover why:  we make a further 5 or 6 attempts to jump and ‘interact’ with the whales, who are expert in avoiding human contact (can’t say I blame them, hunting was only abandoned here quite recently), although some of the group see the underbelly of another magnificent beast as he takes evasive action.

Jana and Nat give us a Puppet show

But all is not lost – as an unexpected bonus we jump in and swim with a whale shark for 15 minutes or so as she cruises majestically along, accompanied by half a dozen or so remoras fastened to her underbelly. It’s way past whale shark season, but the climate changes and El Niña have kept the water warmer and provided plenty of food so they are still lurking around. Later we find another one swimming in the blue. Mind you, I have problems keeping up, but luckily Nat is on hand to give me a yank up to the shark – see the photo for evidence! My poor old leg finds it all rather exhausting especially in 22C and with five layers on! 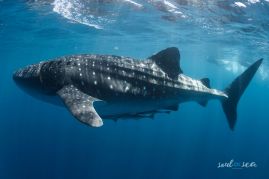 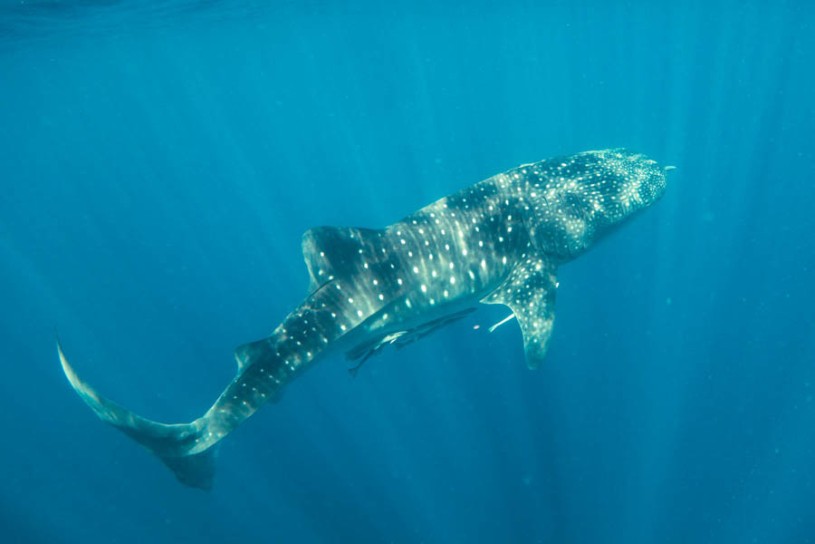 Despite not having a close encounter with the humpies, we unexpectedly come across a bronze whaler shark at close quarters; we feel privileged to be out there, surrounded on all sides by humpies as they frolic in the water. We follow a specially endearing pod, with a little calf learning how to breach and splash his tail, who gives us some wonderful moments, while the escort, usually a young male, occasionally surfaces in a warning ‘don’t get too close’ display.

The crew is friendly and informative, we have a delicious lunch on board, and altogether it is a great day out. Strongly recommend Murray’s outfit as the boat is perfect for the regulated number of five swimmers, so that unlike the other boats, you all get to swim when humpies or whale sharks are found.

Sunning on the prow with Helen 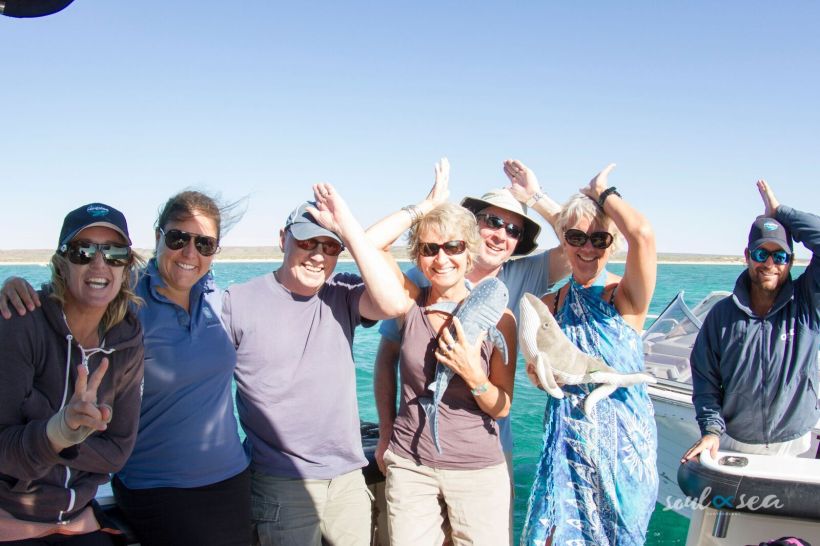 This is the first leg of our ‘farewell tour’ to Asia Pacific. From Perth we flew up to Exmouth, an old US Naval Intelligence station in the Second World War, and now the whale shark centre of Western Australia, to stay in a tented camp recommended by friend Fi. Sal Salis has 16 tents now, and is bang in the middle of the Cape Range National Park, an ancient Jurassic limestone reef no longer covered by sea, and home to the oldest discovered necklace – 35,000 years old.

Ross outside the tents

This is a wilderness area, with desert wildflowers (July saw heavy rains) and a prolific walleroo population, whose corpses litter the road as they have a death wish by all accounts. They also hop quite merrily around the camp, which is set in dunes, like an earthenware necklace on the edge of the beach and the Ningaloo reef.

Our tent is super-luxurious with a fantastic view; the food is scrumptious, all local ingredients, and WA wines and gin flow freely. The managers are African like me, Paul from Zim and his fiancée Candice from Pretoria. He knows Stretch, was at school with Flo Coughlan’s son and also loves Mana Pools. What a coincidence. But no more so that meeting the American couple – he an Ambassador and she also ex State Department – who know an old South African friend from university days. Fascinating discussions about the up-coming elections, their friendship with the Obamas, and African politics… 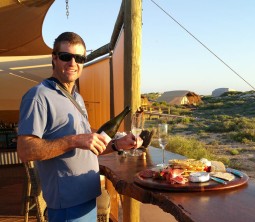 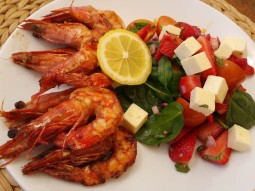 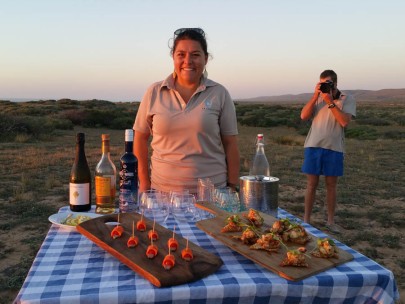 Canapés – Paul Bester is a professional photographer, even when he’s working on another job! 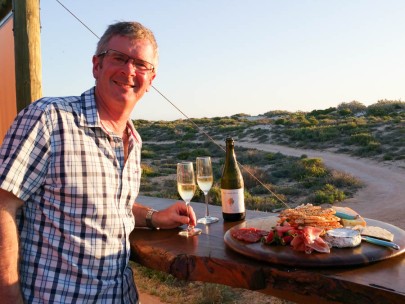 Activities are organised every day, so on the day after the boat trip, we do a drift snorkel (rather tame compared to Komodo and Raja Ampat), and a walk around Yardie Creek, with Eugene, a young German guide from the camp. It’s quite a rocky path, up and down, with stunning views, and I need a helping hand. We are buzzed by an osprey and later we see the nest in the gorge cliff. ‘Oh and there’s a wegetable eagle,’ Eugene says, pointing upwards. Very puzzling – only after he repeats the bird’s name several times, do I realise he is saying a wedge-tailed eagle! 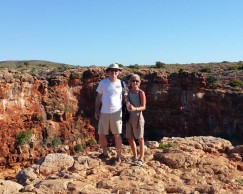 On top of Yardie Creek

He is a great naturalist and points out all the wildflowers and plants that have sprung up since the heavy July rains. On our last morning we visit the Pilgamunna gorge, where we are the only people there and are blessed with sightings of rare black-footed rock wallabies, preening themselves and enjoying the sunshine on the cliff side. Again the wild flowers are in full bloom, yellow, blue, pink and red. Stunning. But we cannot linger as we are off to Coral Bay.

Thanks to Jana McGeachy of Soul & Sea, and Ross Cattell for their underwater photos. The link is to his blog with more photos.

Wallabies in the Pilgamunna Gorge 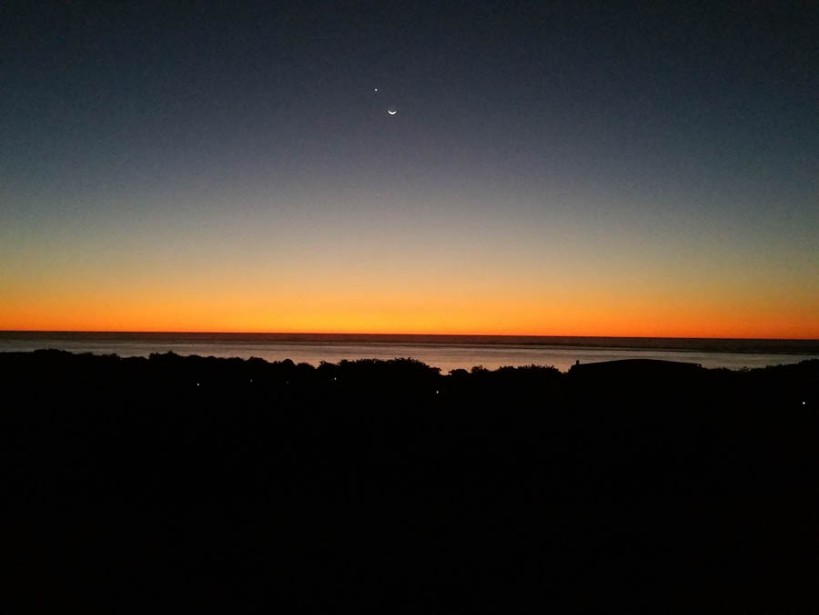 Sunset with new moon and Venus