Luang lives up to its reputation, though we are overwhelmed by the number of tourists, ranging from dreadlocked backpackers to chic French groups, via the hordes of Koreans, Japanese and Chinese, that descend en masse upon this sleepy town.

Many houses are now hotels

The mighty Mekong in the mist 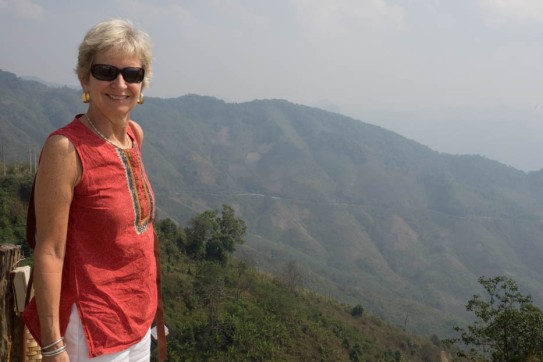 Restaurant stop on top of hills en route to Phonsovan 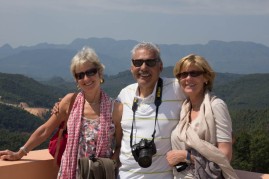 Views of the Nam Or river near Luang Prabang

We are staying in the 3 Nagas hotel, comprising restored colonial French town houses, with lovely soft beds and delicious breakfasts. Good food is not hard to find in this town either. Our favourite restaurant is The Tamarind on the Nam Kham river. 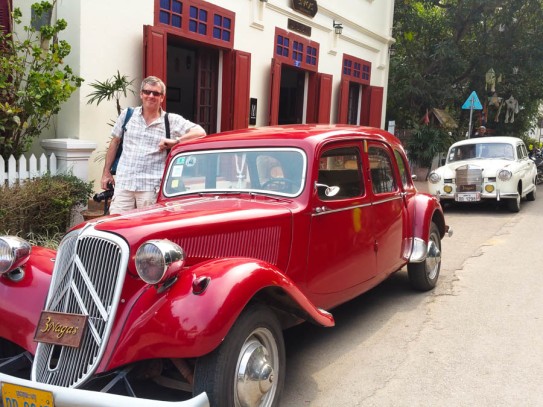 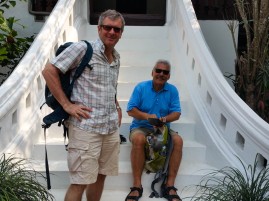 Diego and Ross, about to set off! 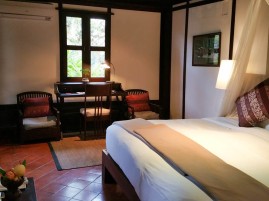 Our lovely room, but noisy!

Chrsitine and Diego posing on teh steps to their room

Cindy outside the 3 Nagas

We take in the normal sights – the Royal Palace, remarkably not destroyed by the Paket Lao when they took over at the end of the war and redolent with fabulous glass mosaics, old photographs and a furniture; various temples and wats; and of course view the daily Tak Bat, where the monks circumnavigate the town at daybreak, seeking alms. Lots of tourists arm themselves with sticky rice bowls, don sashes and kneel in serried rows to give, but they are so cack-handed that they only manage to deliver to every third monk or so. The locals are much more adept. Annoying photographers disrespect the monks with flashes and close-ups and it’s all a bit commercialised. We take bicycles to get further away from the main drag. 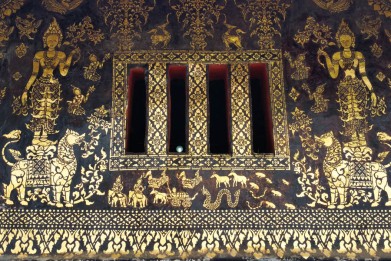 Mosaics in the Wat Xing Thong

Detail from a door in the Wat Xieng Thong 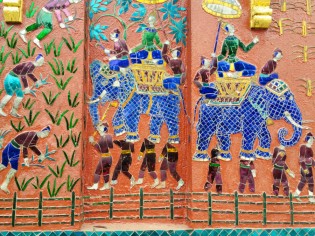 Imp in the Wat Xieng Thong 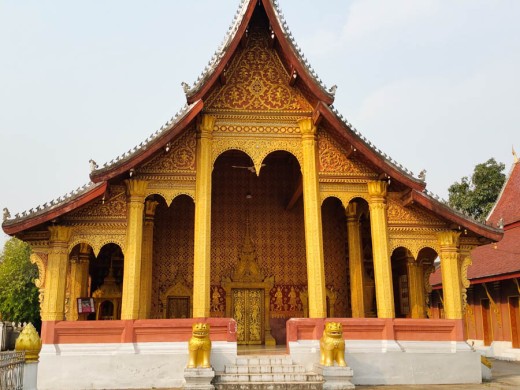 We find a quiet street, no tourists, only the temple dog!

The line stretches as far as the eye can see

In the green of the Royal Palace

Young monks in the garden of the Wat Xieng Thong

We visit the famous Pak Ou caves, with thousands of Buddhas strewn higgle-de-piggledy on the natural rock ledges. It’s a bit of an anticlimax, and busy, but the boat ride up the Mekong is peaceful.

Entrance to teh caves

A fraction of the Buddhas 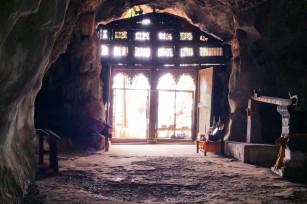 Entrance to the second cave

Large gold Buddha as well as the 1000s of small ones

Ross and Cindy at work on teh boat

Team shot at the caves

The Tat Kuang Si waterfall is better than expected, with the falls being an electric blue due to the limestone. Cindy is transported to delight by seeing the rescued Moon bears. Guy and Ross even brave a dip! 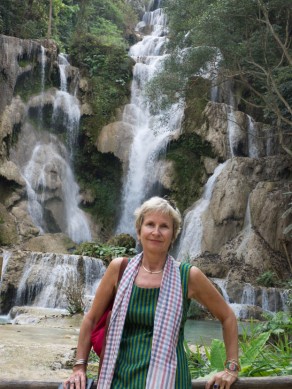 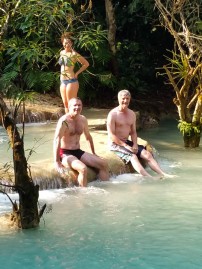 Three nights is too short in lovely Luang and reluctantly we depart for Vientiane to meet our flights home, while Cindy and Guy leave for Hanoi for another month of wildlife touring in SE Asia. We have time for a quick whizz round the capital and a final farewell dinner before going our separate ways.

Chrsitine and Diego posing on teh steps to their room 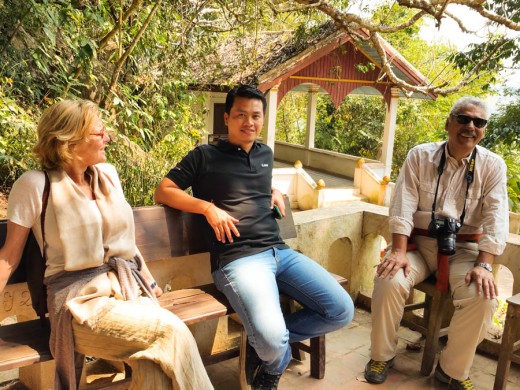 Hanging out by the caves

It’s been a great couple of weeks, and Christine and Diego are, as ever, wonderful travelling companions. We have seen much of northern Laos; one of the English founders of OckPopTok handicraft cooperative was impressed by how much ground we had covered and said it was unusual for people to explore in such depth. Sure, there are things we would have done differently, but we have had a marvellous time and seen much of village life here in Laos, and witnessed a country in transformation. 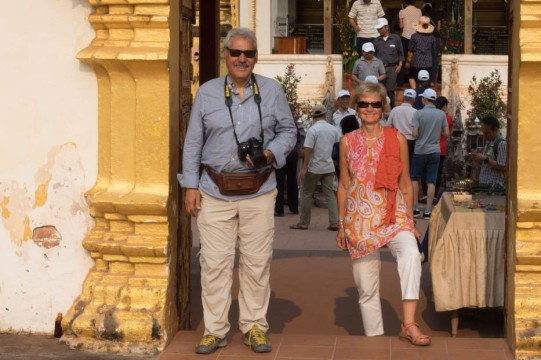 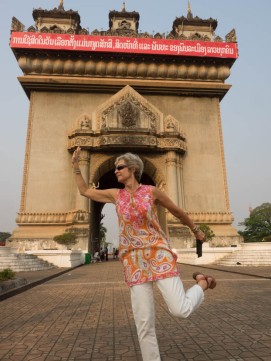 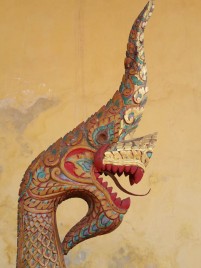 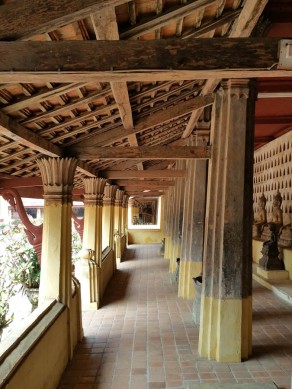 Here are some random photos of me that Ross has shared, finally! 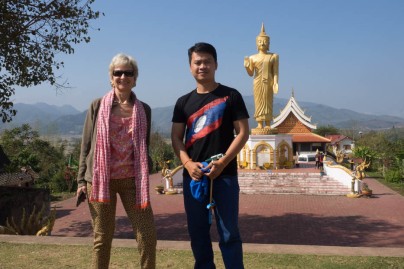 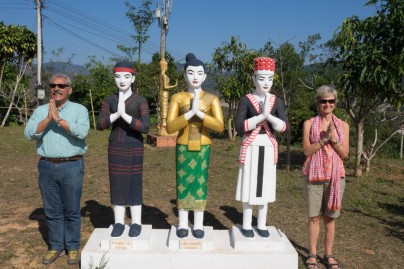 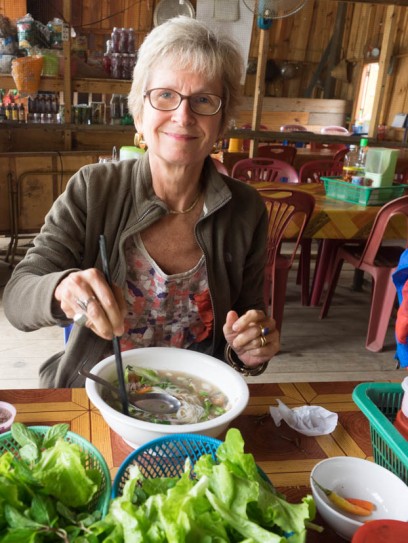 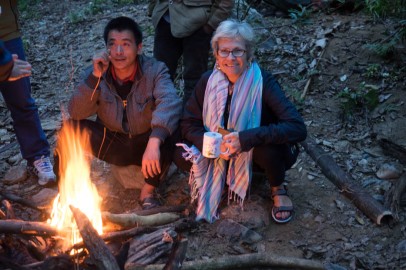 Go now before the Chinese developers have knocked down all the old buildings (as they are in Vientiane to build huge hotels) and the virgin forest has all disappeared. As it is, traditional dress is hard to find…and will soon be brought out only for tourists. I just hope the Lao people don’t lose their gentleness and serenity. It certainly is the Lao PDR – People Don’t Rush.

Here are some final photos….and check Ross’s more erudite site with loads of professional photos too. 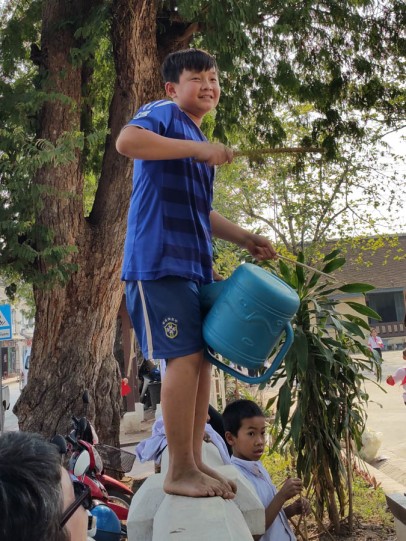 Drumming up support for the football on a watering can!

Hanging out by the caves 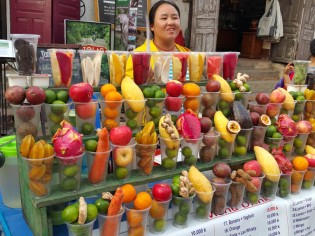 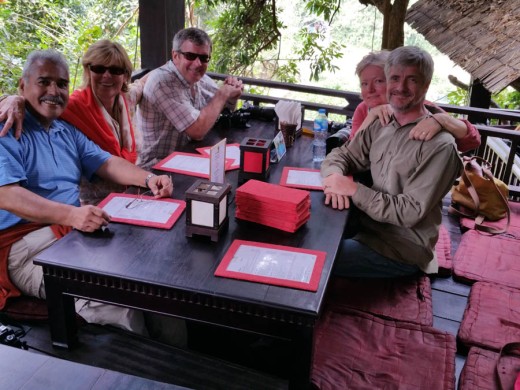 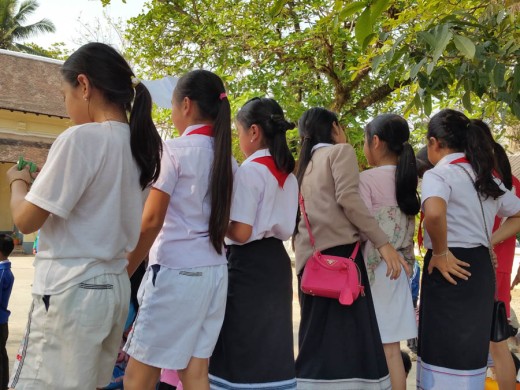 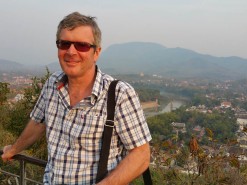 Ross on top of That Chomsi, Luang

The Satri House hotel, belongs too the Royal Family – still!

2 thoughts on “Flash-packing in Laos 3: Luang Prabang to Vientiane”