In Myanmar at last, what a way to celebrate Ross’s birthday! We trickle in from our respective destinations, all 10 of us, friends and family – Christine, Diego, Hilary and John, Jane and Trevor, Rick and Lucille –  who have come together for our tailor-made ‘off the beaten track’ adventure. 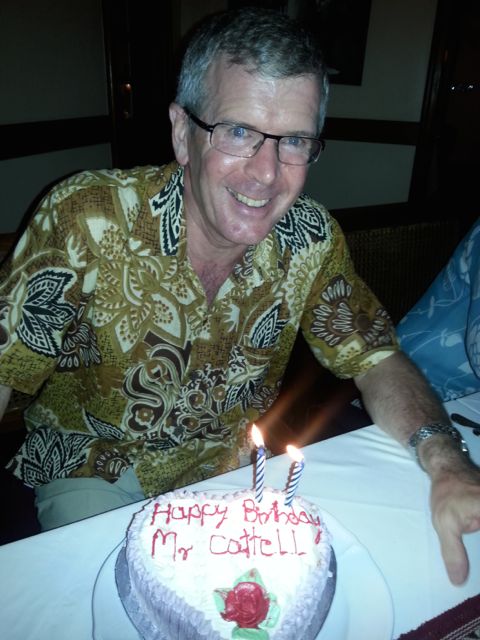 Cake made by the Savoy hotel for the birthday boy

We arrive first, with cousins from Switzerland Christine and Diego, and settle in to the charming colonial-style Savoy hotel. All the floors are dark polished teak, and local antiques, carvings and wall hangings decorate the rooms and public areas; there is a small swimming pool and bar area in a shady garden. The first night we get the fright of our lives as we sit down, catching up on news, and a huge rat skitters past us and flies into the pool where it proceeds to swim for dear life. The waiters all look aghast (wonder how many times they’ve done that!) as they finally jump to attention and try to fish it out with a net. Which they do, only to lose it again and it scurries pell-mell towards us, leaping over Lucille’s feet, and disappears, probably only to return later! It will be the finest hotel of our stay. 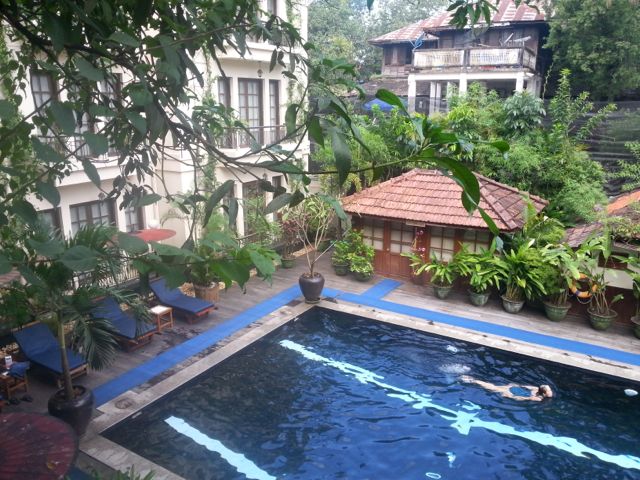 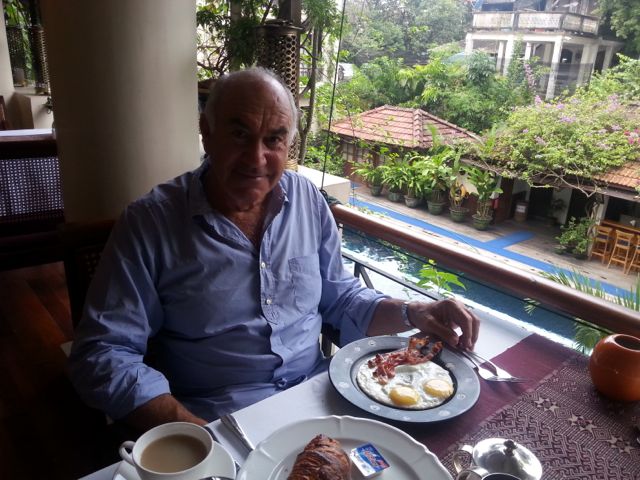 Rick enjoying breakfast at the Savoy

While waiting for the others, the four of us set off for an explore of down-town Yangon, which we find quite charming, if hot and sticky, though the older buildings in the city centre are all falling down and being replaced by newer apartment blocks. Only recently has the government called a moratorium on this sort of urbanisation and we see encouraging signs of renovation of the oldest examples of colonial buildings – the law courts, museums and churches. Later we learn that it is very expensive to live in this area, old or new build, and the lower floors are more desirable as the lack of lifts is an issue when you have to climb several stories. 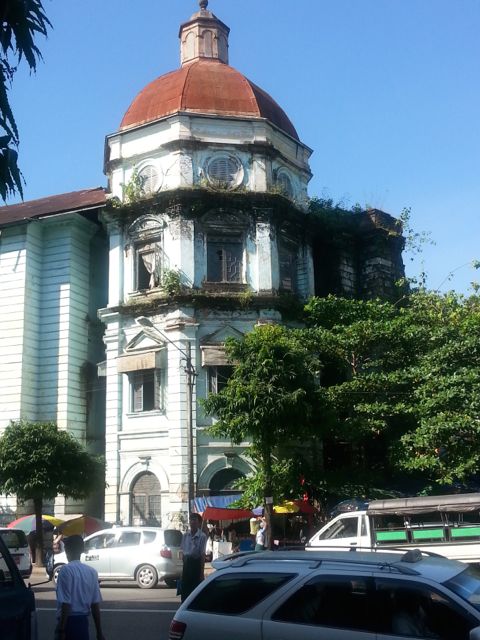 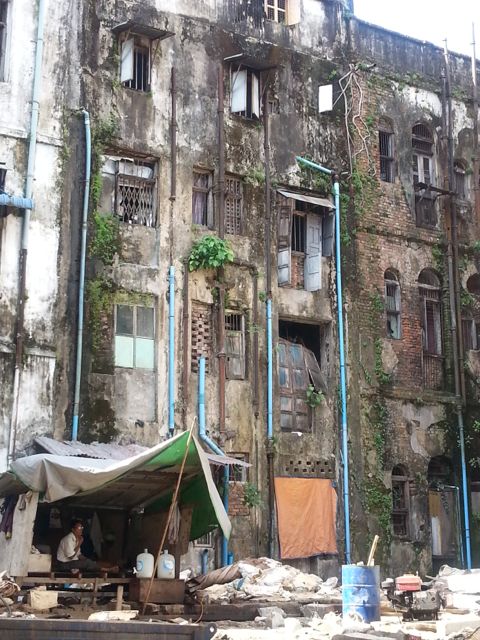 For this one it’s too late as a building site attests in front of an old block. A common sight

Determined to find Scott’s Market, we trail around, looking with horror at some of the street food on offer – Yangon favourite is innards of all varieties, skewered and deep fried in a vat of hot oil. The smell of old drains and sulphur is as bad as it must taste! Shan noodles look tempting, as does the fruit, piled high and sold cheap, but dangerous territory on day one! We plump on a local café, where we have chicken and beef curry, rice, veg and watery dahl all for under $10 excluding beer – between us! 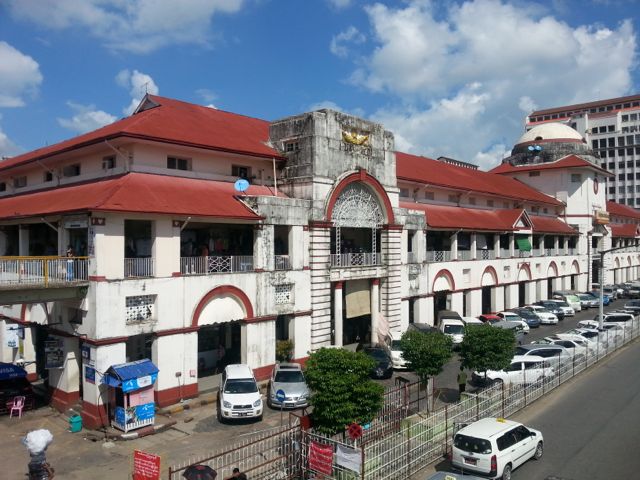 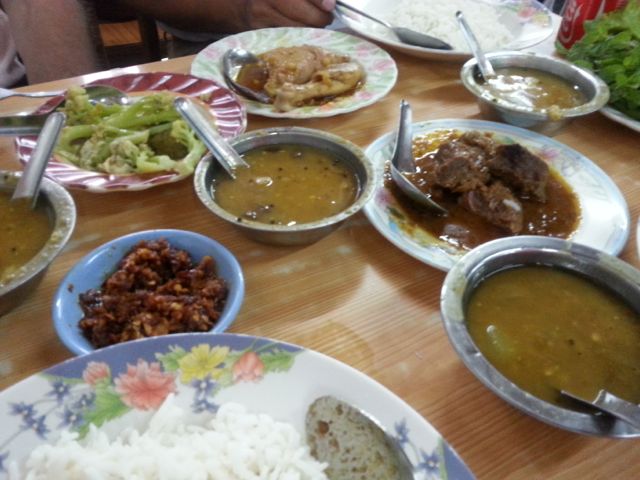 The market is fantastic, a large building stuffed full of stalls selling everything from the country, old and new, precious and semi-precious stones, jade, longyis for men and women, lacy tops, knick knacks and of, course, food which is eaten here all day long, as everywhere in SE Asia. And it is incredibly cheap. 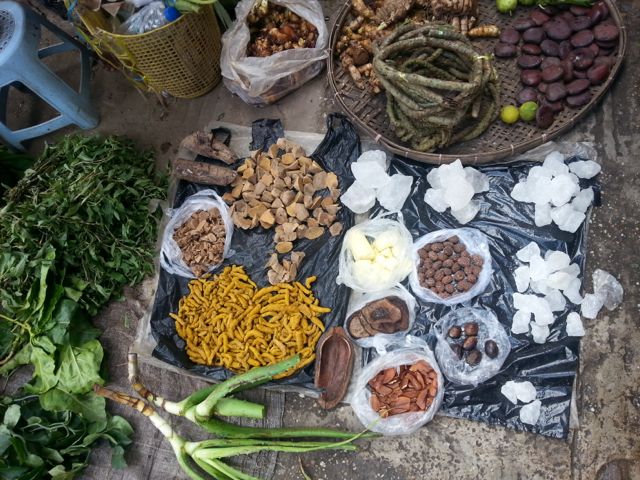 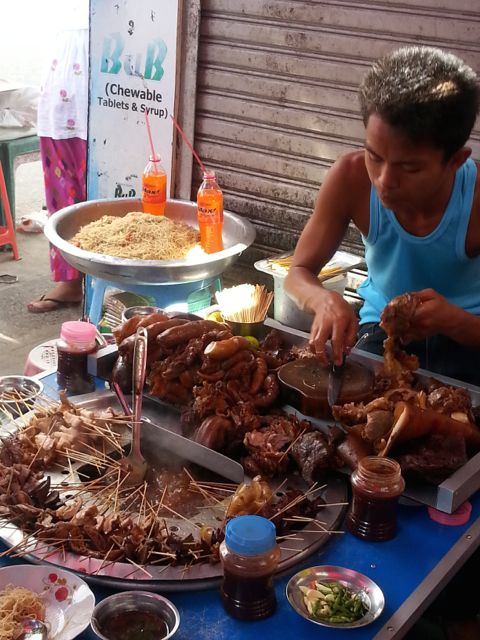 The next morning we meet the gorgeous Ghi Ghi who is to be our guide for the duration. All groups sub-contract to a local firm – our is Silk Road to Asia – and although we did try to book direct, the local grasp of English and understanding of what a tailor-made tour is tends to be challenging over the internet, as we find later on in Bagan, Mandalay and Inle Lake, where we join the throng everywhere we go. 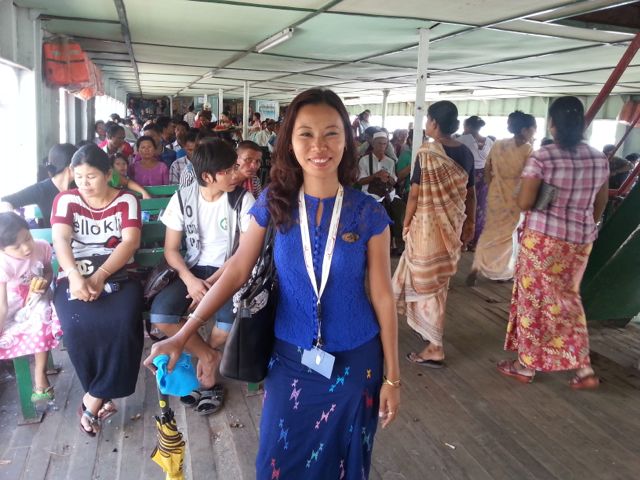 gorgeous Ghi Ghi on the ferry

We re-trace our steps somewhat, but the highlight is a quick ferry trip, aller/retour, to sample local life. The ferry is on three layers, and as soon as one load disembarks, there is a mad scrabble to embark – hawkers carrying snacks and fruit on their heads, plastic chair in the other hand, mothers and babies, elderly folk, students, monks, nuns, the ubiquitous small boys touting anything and everything – and us, a motley crew of sweaty tourists, accompanied by Ghi Ghi who never fails to look cool and calm in her traditional dress of embroidered longyi and lacy top. It’s organised chaos, and we all breathe a huge sigh of relief that I relented on my original plan to travel from Mandalay to Bagan on the local ferry – 13 hours like this, hard seats and baking hot would have been purgatory. Instead, I’ve booked a private boat with its own loo and lunch thrown in (as you will see in a later blog). 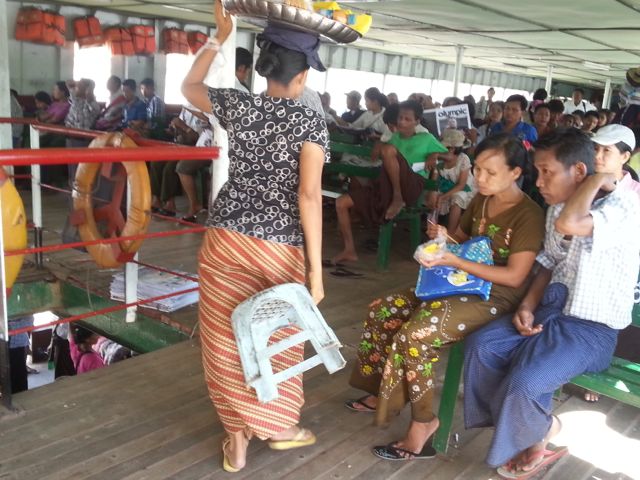 Need to carry your chair if you’re working the ferry 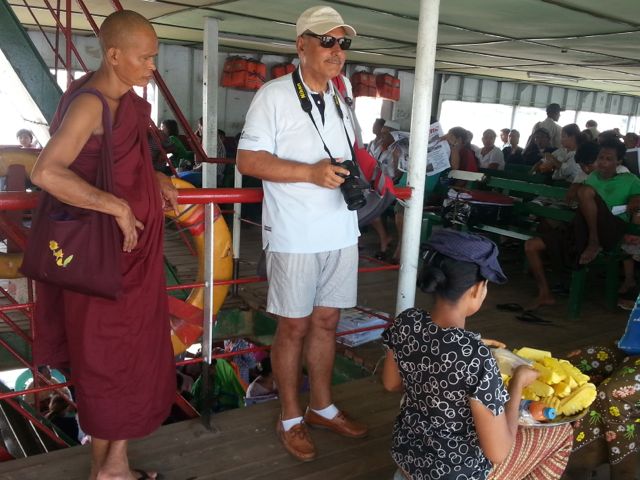 Diego and a friendly monk

Yangon is a bustling city of 6 million, with a strange system of right hand cars driving on the right, which adds a frisson of excitement, especially on mountain roads with U-bends, as the driver is effectively blind – although assisted by a gofer and an intricate system of indicators and horn tooting. Until the new democratic government came in three years ago, cars were restricted – indeed motorbikes and cycles are banned from the city centre to ease congestion – as were many things. Mobile phones, the internet, Facebook, ATMS and credit cards are all new kids on the block. Ghi Ghi is an avid social media chick – always on Viber with her friends and posting photos of us all and herself. 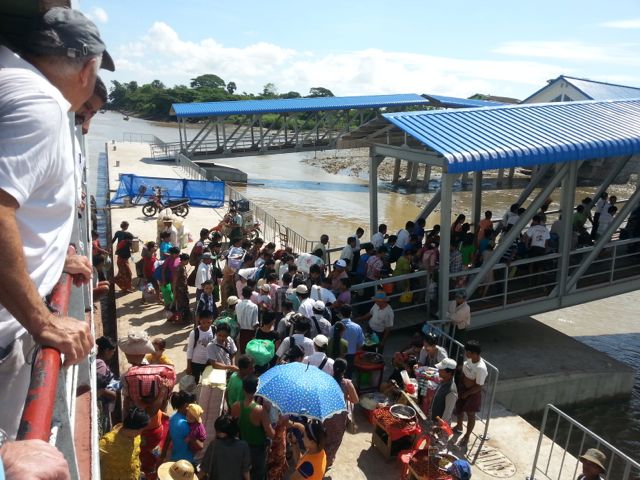 Disembarking the ferry – the ferangi look on!

However there is an air of anxiety as elections are due next year, and while the President Thein Sein is ex-military, it is unclear whether an election will bring more freedoms or a crackdown. As I write Obama has already expressed his disappointment that Myanmar is ‘backsliding’ on some reforms, and there is continuing persecution of the ethnic minorities, especially of the Rohingya tribe. Of particular concern is Aung San Suu Kyi’s illegibility to stand in for President in the next election. http://www.theguardian.com/world/2014/nov/13/barack-obama-burma-tensions-military-rule 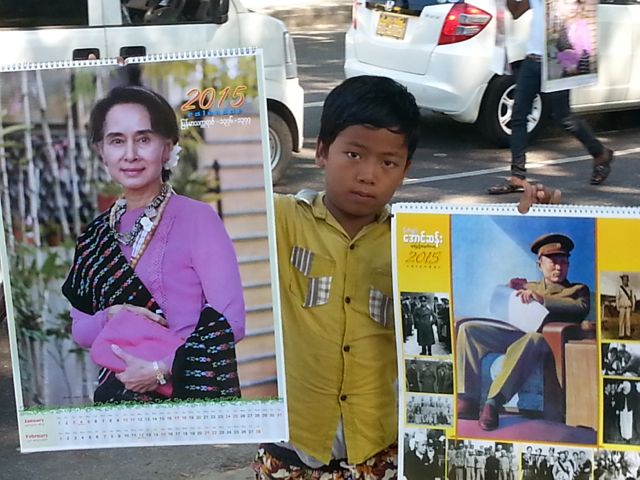 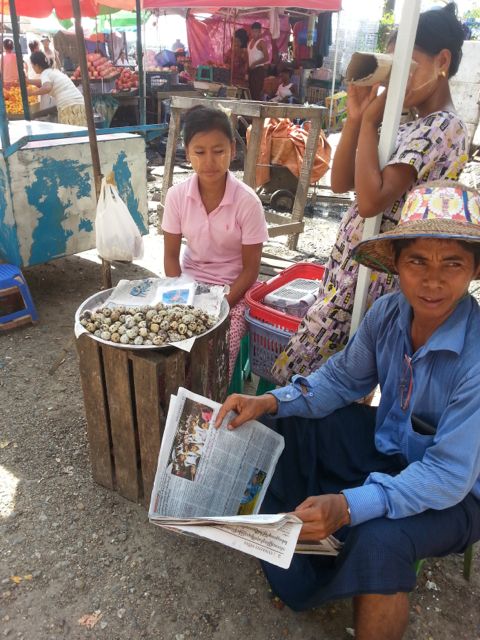 Quails eggs and the morning paper 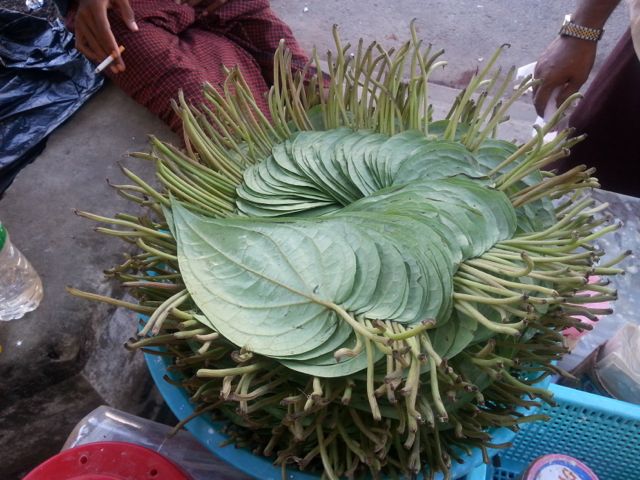 After a delicious lunch sampling local fare in Feel Myanmar, which is a free for all, pick-your-own buffet (goodness knows how you would manage if you didn’t have a guide), we make a start on the pagodas, or par–goh-dar as Ghi Ghi calls them. The most stunning of these is the golden Shwedagon complex, which we visit at dusk. The roof is undergoing some renovation but it does not deter from its magnificence. It is teeming with people of all nationalities, mingling with the monks and nuns, many foreign groups carrying flowers as part of their worship at the shrines. 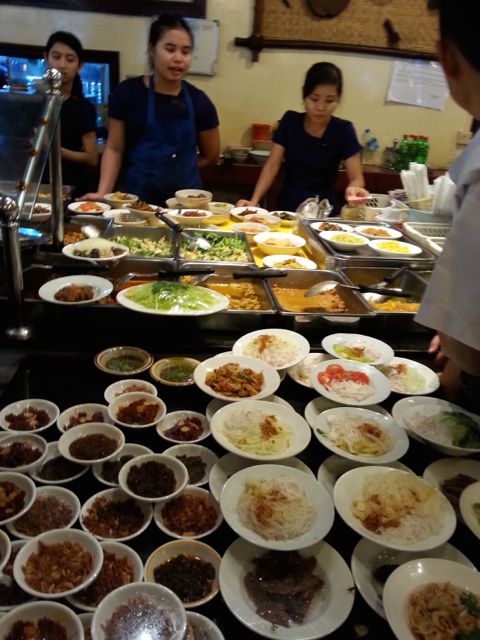 Feel Myanmar buffet…what the hell is it all?

There is a shrine of every day of the week, as children are named according to the astrological sign day they are born under. For instance, Thursday is mouse; Friday is guinea pig (although I think it’s a rat really); Saturday is dragon and Sunday is garuda. Wednesday is unique as it is divided into two – elephant with tusks (am) and without tusks (pm). Ghi Ghi’s real name – this is a nick-name – name means ‘like precious gold’. Charming. 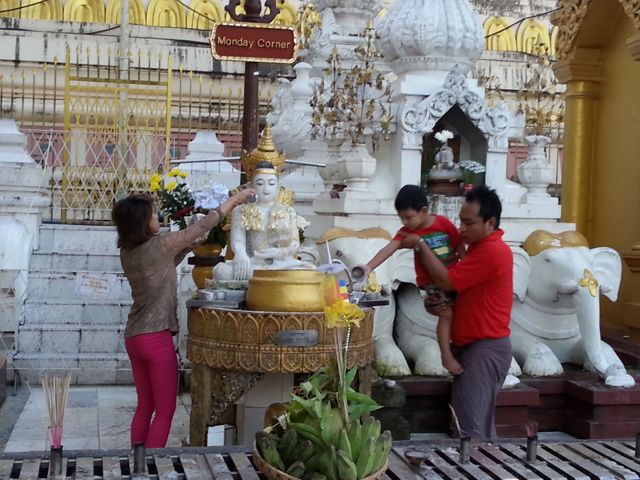 As we walk around, we learn of specific Myanmar adaptations of Theravada Buddhism, which they follow, along with Sri Lanka, Thailand, Laos and Cambodia. Here they believe in re-birth rather than re-incarnation. Unique to Burmese Buddhism is the incorporation of the veneration of nats, or nature spirits – we saw shrines to them in several pagodas, notably in Bagan. Myanmar is said to be the most fervently Buddhist country in the world measured on the proportion of monks in society and the amount given in alms. Each male is supposed to enter the monkhood at least twice in his life, ounce as a small boy and then, again, as a young man. Many men will spend one week a year with shaved head, begging for alms and living the simple life. Luckily for us ladies it is not compulsory to become a nun, though you see very many wandering around, clad in pink robes. 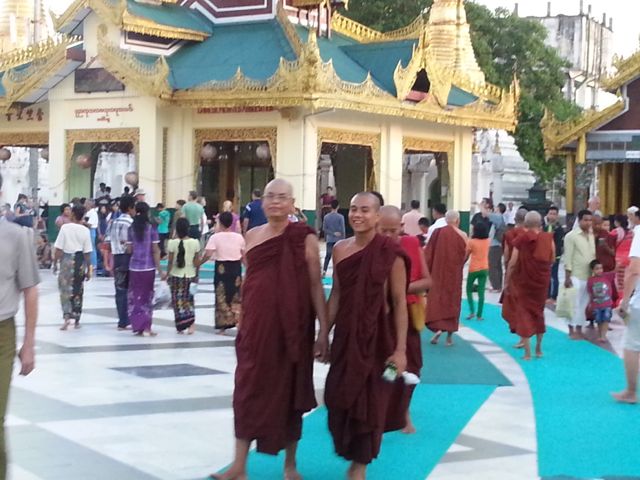 There are five basic commandments in Buddhism: no killing of people or animals, no lying, no adultery, no stealing, and no drinking. But as Ghi Ghi said, ‘Myanmar people happy-go-lucky – is OK if we do only three of these things’. They do eat meat and like a drink or two, we noted! And it is noticeable how friendly, smiling and peaceful people appear – it is hard to imagine the sectarian killings that take place in the hinterland – but read any of the history of the Shan, the Mon, the Karen, the Palaung and other smaller groups and you will find that they have been persecuted, especially under the murderous rule of General Ne Win, who took over in 1962. He only gave up power in 2010, in the face of the Saffron Revolution protests, caused by the fuel price rises in 2008. There are seven states in all, 60 million people; there are seven major ethnic groups which, with the predominant Bamar people, account for 92%. The rest are subdivided into 127 separate nationalities. The predominance of the Bamar people and the name Burma, coined by the Brits, is now no longer preferred: Myanmar is felt to be more inclusive of the minorities. No wonder there is tension. 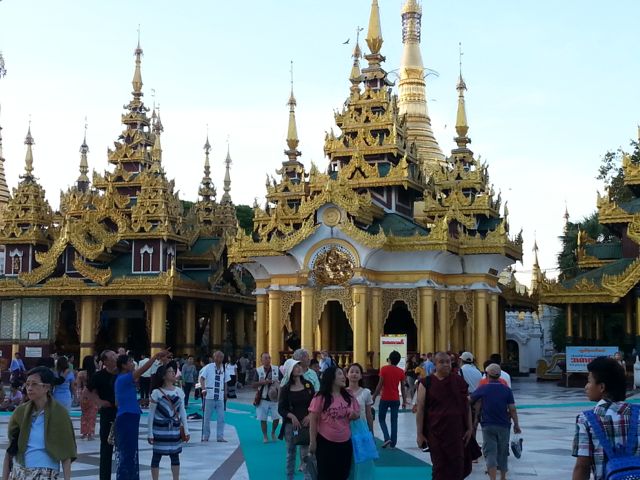 Crowds taking the evening air at the Shwedagong 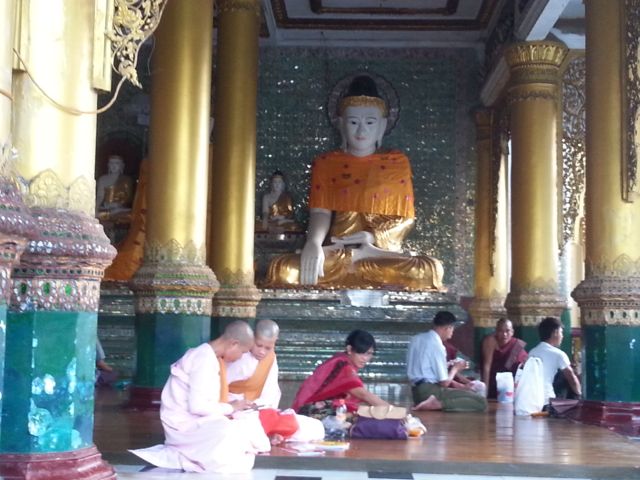 Our whistle-stop tour takes in the reclining Buddha at Kyauk Htat Gyi Pagoda, very garish and modern looking, all shiny white and gold, with life-like eyes made from blown glass, and ends with a set menu dinner at Patoma, where we discover the delights of Myanmar wine. Only the Red Mountain Sauvignon Blanc is any good, for future reference, although our resident wine buff insisted on trying the various vintages in every watering hole…mostly the others were foul! 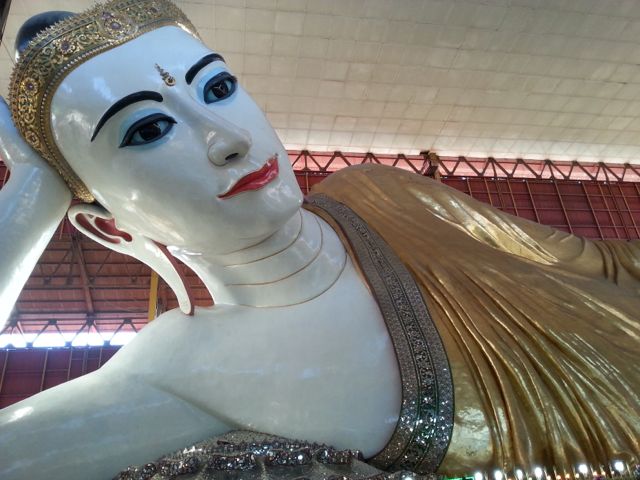 The next stage of our journey will take us to Lashio in the Northern Shan states and thence to Hsipaw (pronounce Thibor or Sipaw, depending on whether you are Bamar – former – or Shan – latter) for our trek to the Palaung tribal area. 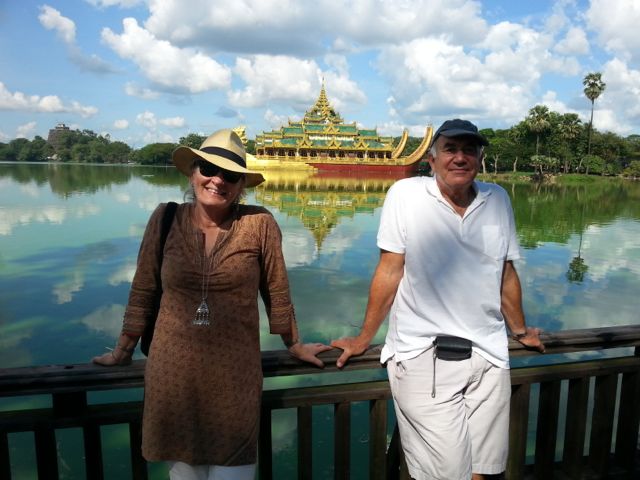 Hilary and Rick pose in front of the fake pagoda restaurant 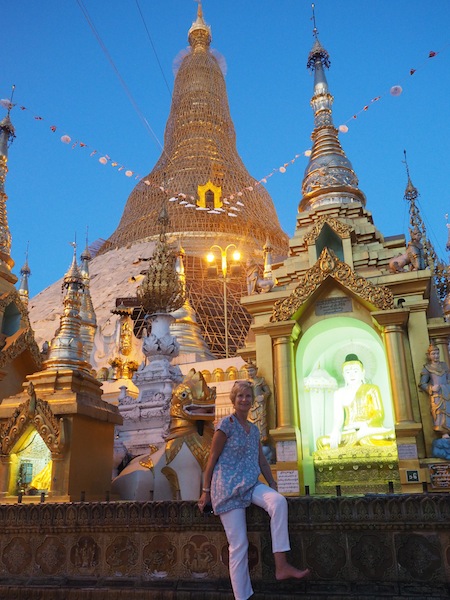 Herself at the Shwedagon

One of hundreds of Buddha statues

Feet of the reclining Buddha

Lucille with fan, it was very hot!