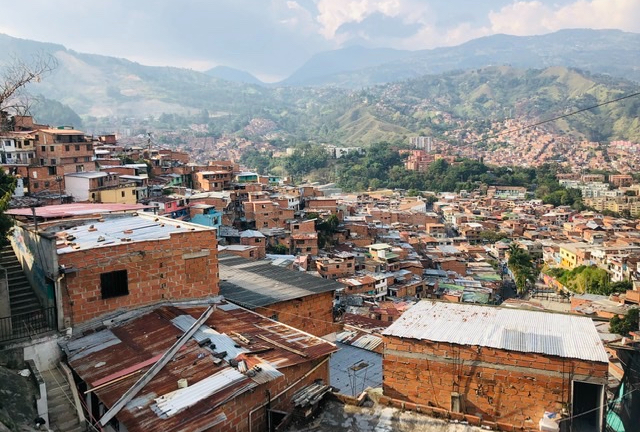 So here we are almost at journey’s end. The last part of our trip takes us down the western side of Colombia and back to Bogota and then home! But it is so rich in experience that I’m splitting it into two blogs. We travel via a mix of plane and car, and see two extremes of this country – the very rich and the dirt poor and, in Medellin, some green shoots of transformation. Venezuelan refugees continue to be a major theme, always on the road – walking to who-knows-where, begging in the cities,  sleeping rough. Depending who you talk to there are between two to three million of them. Some find work undercutting local labour, but most rely on generosity and handouts in this poorest of countries. 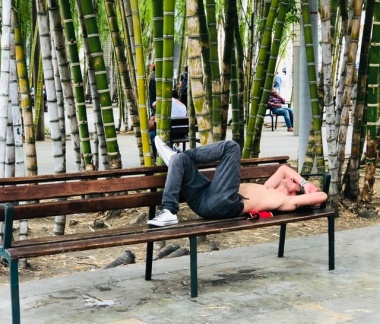 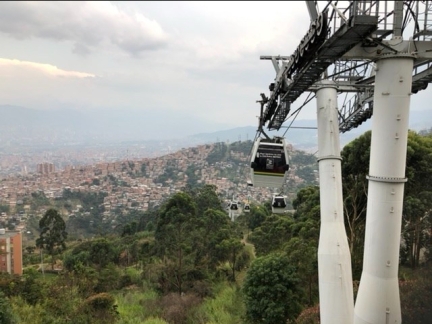 The teleferique, one of five

The road to Cartagena takes us though salt-mining villages towards Barranquilla on the Magdalena river estuary (we are to see it again near its source in the Andes). Here are the most abject and filthy people living amidst rubbish and filth; Barranquilla, home to the second largest carnival in south America, is little better – a city that has sprawled and outgrown itself, though the brand new suspension bridges take your breath away.

No photos of Barranquilla so here are some murals from Medellin

Everyone raves about Cartagena but I find it rather depressing. Sure, the old colonial buildings are stunning and splashed with colour, but it is a cruise ship destination and therefore attracts all that is bad about this business: hawkers and street vendors everywhere (not too pushy it’s true) and beggars everywhere, particularly destitute Venezuelans.

These fruit sellers are everywhere but hate having photos taken. Slave style dresses.

We have a pleasant evening on an eco tour being punted round the local wetland, Boquilla, right underneath the the spans of the main bridge into the city. We drive along a sandy beach where locals hang out and play soccer until we hit the lagoon and the poor fishing village. We see wonderful birds – flocks of sandpipers, egrets, herons, cormorants, kingfishers and visiting migrants and learn about the importance  of mangroves today balancing the ecosystem. How it survives is hard to imagine with the traffic whizzing over our heads.

Thr main bridge into Cartagenga over the swamp 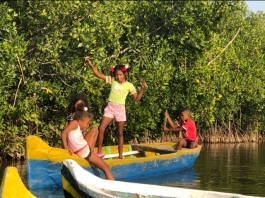 Kids. In the lagoon 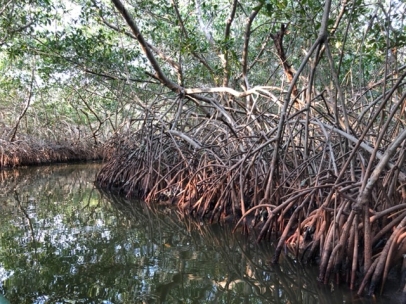 We also make the popular day trip to the Islas del Rosario. We have been spoiled by the beaches and emptiness  of the South Pacific so it wasn’t really our cup of tea, going out with boatloads of other tourists. It is eye-opening to see on our cycle ride round the villages behind the glitzy hotels the poverty of the island; here there is no natural water and it has to be brought in by tanker every 10 days. But for Hilary and John, a snorkel and some sun is very much in order and they bump into, by extraordinary coincidence, some great friends of theirs, Marie-Laure and Benoit, last seen in Abu Dhabi but who now live in Panama. 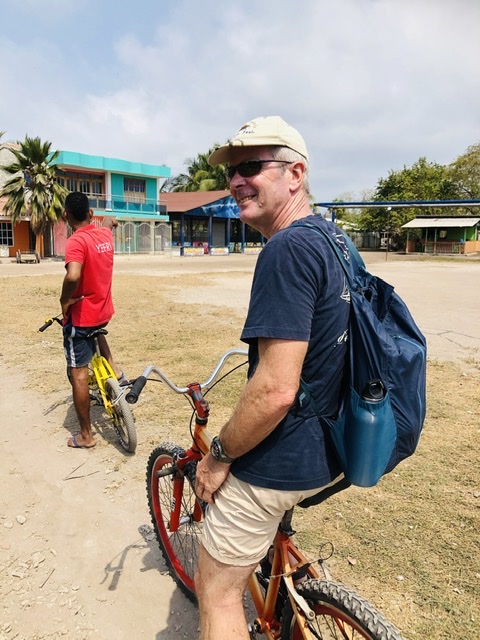 As well visiting  the slave museum and an extraordinary church dedicated to St Pedro de Claver (with its fine collection of Haitian art) who dedicated his life to the well-being of  slaves and whose body is on view on the main church, we also see how the other half live in Cartagena, the playground of wealthy Colombians. We dine in a couple of recommended restaurants and see the rich at play. Old school service with live bands and decent food (not much to be had in Colombia, but here at least you can get good ceviches and seafood in these posh places). 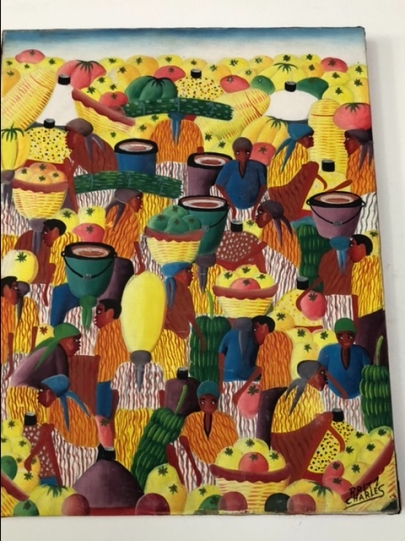 The Convento of Pedro de Claver

Medellin is also a city of contrasts. The investment flowing in post-Escobar and the vanquishing of his cartels is brought home as you drive in from the airport through the 3-month-old tunnel, 8.2 kms long, quite a feat of engineering. We had the good luck to have an extraordinary guide for our city tour: Edgar lived in Cheltenham  20 years ago and was, it seems a bit of a lad. His colloquialisms are hilarious – ‘legging it’, ‘necking it’, calling the chaps ‘mate’ with a cockney accent but superlatively, topping it all, giving us a word-perfect rendition of Three Lions in the teleferique, all verses. He admitted to being a bit of a football hooligan in the day and going ‘down the local Paki – yeah I know that’s racist today – after the match’ and to having all the box sets of Father Ted, Monty Python and Blackadder… say no more!

Edgar and the boys enjoy a local beer in Comuna 13 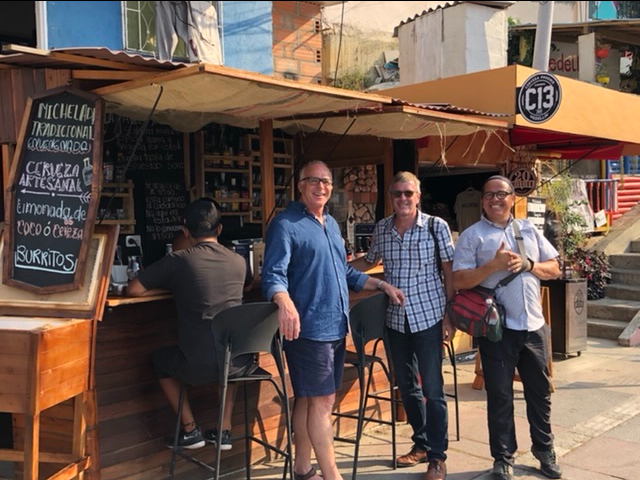 He is also a mad-keen twitcher, and we have an ‘urban birding’ tour round the city centre as he spots caracaras, keskidees  and parrots in the trees while we walk around Botero square (‘where everything is for sale’) and parade down the Junin, the main market street, with all its jugglers, street performers, drug addicts, prostitutes and beggars – a rather scary place in many ways.

MEdellin is flower capital of Colombia 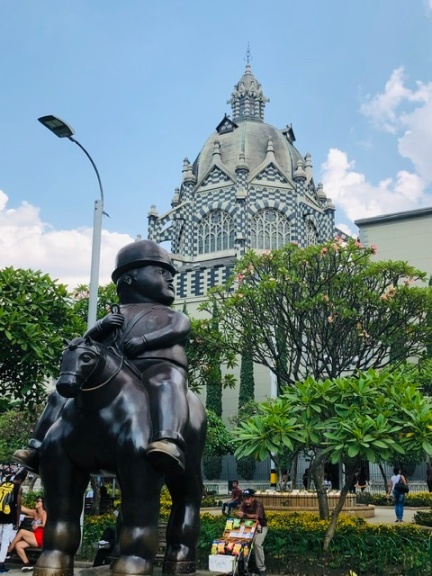 ONe of Boltero’s fabulous kitties

His story is sad, a Venezuelan linguistics professor, he had a viable travel business centring on birding, and a micro brewery, but he lost it all when his family had to flee, his father being a senior executive at the oil company. He says the problem with the Venezuelans is that as a result of years of Chavez and Maduro they are not used to anything other than handouts. 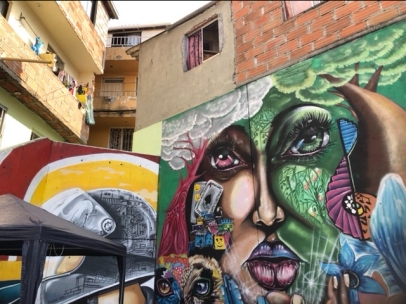 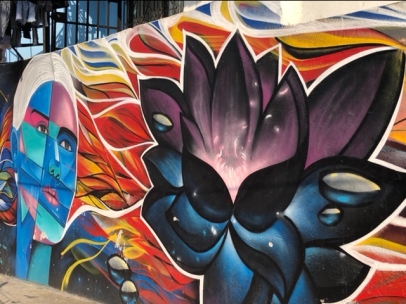 He tells us how Medellin was a no-go city controlled by the different gangs – drug lords, FARC and paramilitaries (who were just as bad as FARC in terms of terrorising the local people) but recently the change in politics and a series of strong mayors has driven the gangs out and brought foreign investment in the form of making it into both a hi-tech centre and building escalators, walkways and cable cars to join the former warring favelas together. And it’s worked!

We are bowled over by the ease with which we can walk through the former dangerous Comuna 13, drink a beer and admire the street art which reflects the struggles, especially of the women. It’s a great story; let’s hope it is allowed to continue. 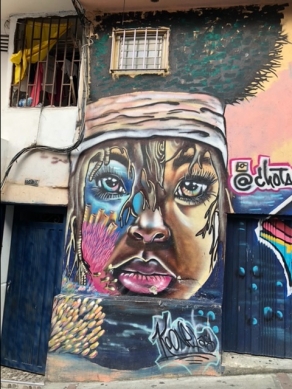 The following we day we take a day trip to El Penol, the famous rock where you climb up 659 steps to get the supposed best view in the world. Sadly it is murky so we don’t really see much, but at least we make it, along with hundreds of others. 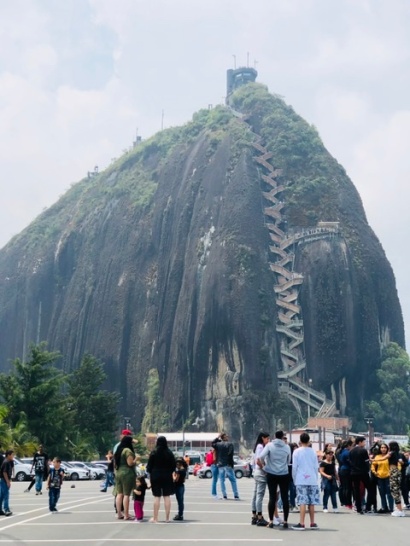 Thence to Guatepe, famous for its ‘zocolos’ plaster panels which were originally inspired by a religious lamb motive and now encompass the trades and occupations of the home-owners. Despite being super-touristy we enjoy the luscious hilly scenery which is the market garden of Medellin – cabbages, tomatoes, lettuce, maize, onions, coffee, herbs, plantain – all those staples of the (bland) local diet. 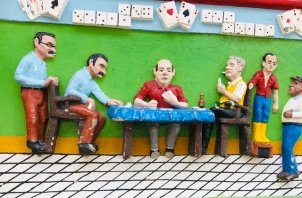 This ss the keep fit club for the elderlies! 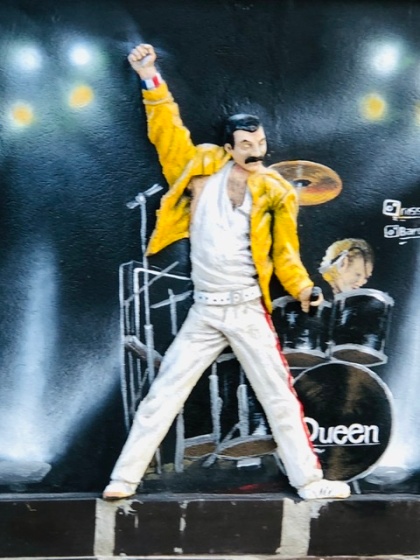 Freddie Mercury – whatever next? 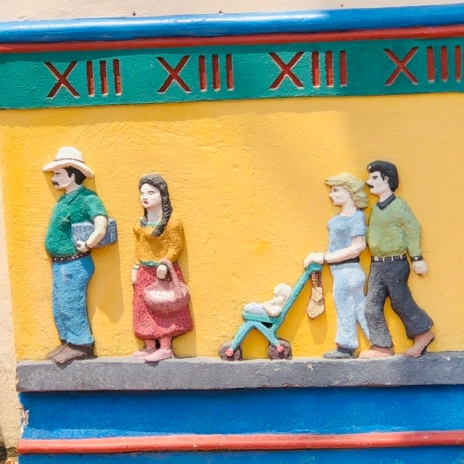 Back in our rather smart suburb of Poblado we sigh with relief as we wander round the streets at night, taking in restaurants and bars with live salsa and a singer with an augmented bum (no photo – it was too dark!). But the joint is jumping – the streets are alive with vendors, breakdancing groups,  traditional bands and the young and hip are out in force. It reminds us of Singapore somehow, with the large rain trees and modern buildings. On balance we find Medellin a place of hope for this long-suffering country. 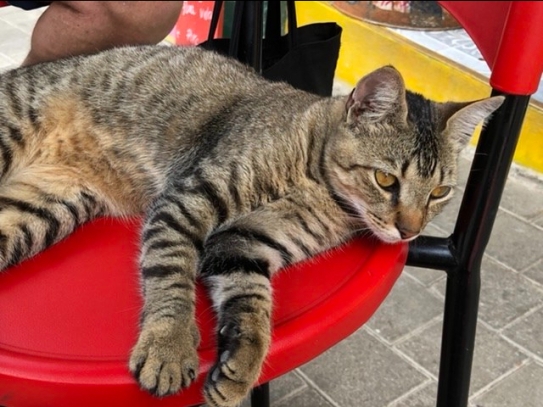 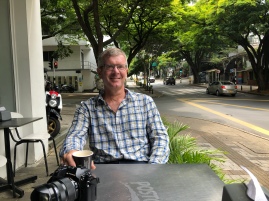 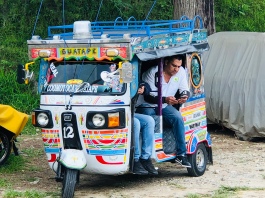