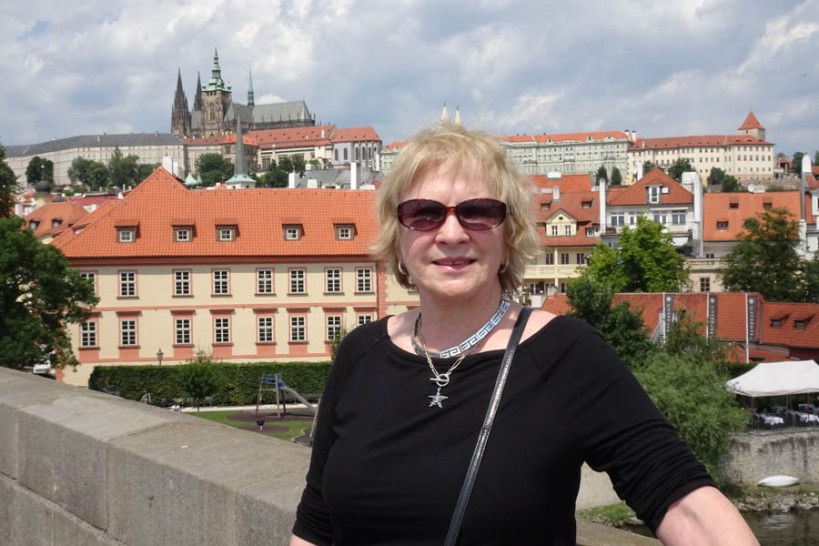 Bonnie on the Charles Bridge, Prague Castle and St Vitus Cathedral in the background

This was my fifth trip to Prague, but one with a difference. Eight years after discovering the existence of an older half-sister, I am taking her on a journey to discover her heritage. Bonnie has never been to Prague, let alone Boskovice where our family hail from, and she as thrilled as a little girl waiting for her Christmas presents. 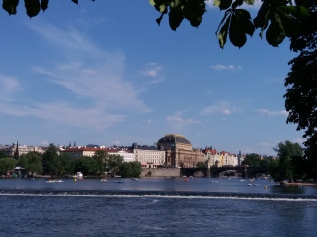 Views over the Vltava

We arrive in glorious sunlight and, as the hotel room is not quite ready, take a stroll across Charles Bridge. We look in vain for the statue ‘Somebody’s farted’ which I have never found since I visited with our father in 2002; in fact all the statues seem to be of saints rather than stuffy city burghers so we are perplexed. I am appalled by the number of beggars, all prostrated on the ground holding a cap in the hope of crumbs from the rich man. Later I learn that they are mostly miners from industrial areas where jobs have been lost and who have come to the city seeking the proverbial gold. 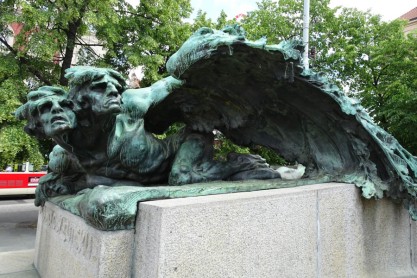 View from our room

We arrive back at the charming Pod Vezi hotel just in time to meet Hana Junova, one of our father’s oldest friends, whom I have invited to lunch. She is thrilled with our gifts – Jo Malone and tea – and I with her Dvorak concertos. She regales us with stories about our father’s love of practical jokes, one in particular still makes her double up with laughter. He invited Hana and Mirek to accompany to him party. Whats the dress code? they asked. Oh, casual, he said airily. So they took him at his word and turned up in pyjamas. Luckily Czechs all share a similar sense of humour.   She also describes how she survived the war, protected by Vaclav Havel’s brother, who was a family friend. She must be well over 80 but still gives lectures and coaches fellow psychologists. An amazing woman.

Lunch over, Bonnie and I hike up to the Castle, where our grandfather worked during the last few months of his life. He was miserable there, despite the beautiful surroundings, as recorded in his letters to his best friend which I found in the Jerusalem archive. It is awash with visitors – so many Chinese, all fashionably attired in best selfie outfits, posing: arms akimbo, on one leg, peace signs and sticking tongues out. And the brides! One morning I look out of our hotel window onto ‘Mozart Street’, as filmed in Amadeus, and there’s a couple in full fig on a photoshoot at 7.30 am! 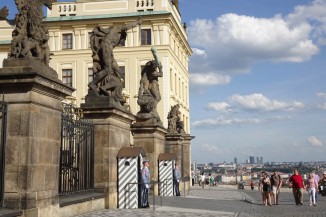 The building where grandfather worked – 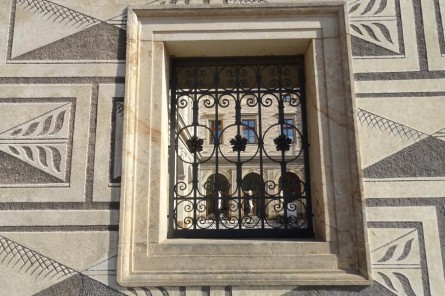 Baroque window of an old palace 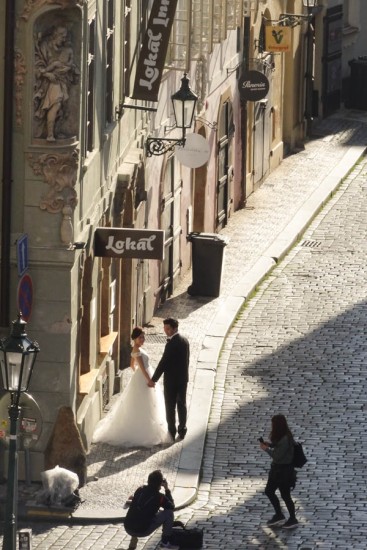 Bonnie posing! inspired by the Chinese

Then time for the first of many Aperol Spritzes, in the courtyard of the Mala Strana district. We are enjoying getting to know each other, alone together for the first time for more than a few hours. It’s going to be five days so quite challenging for sisters who are relative strangers! Strangely – or may be not – we are on the same wavelength and I recognise so many family traits in Bonnie –  such as punctuality, which we both share. 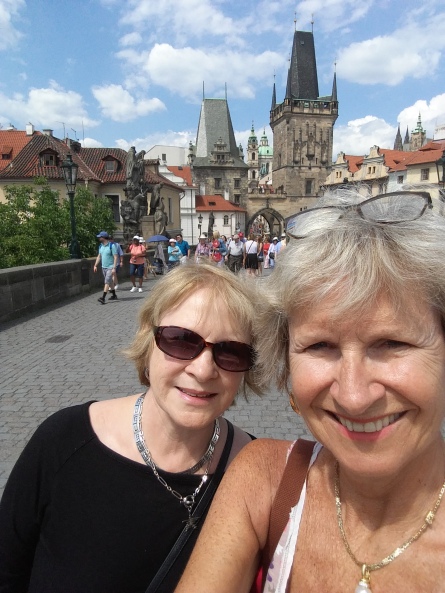 Bonnie is determined to make this both a discovery tour and a trip down memory lane, so she braves goulash and dumplings, while I have the roast goose leg with red cabbage, both Dad’s favourites. ‘If Tom is in heaven he would be looking down on us and smiling now – well apart from the fact I’m not too enamoured of the dumplings,’  she says. 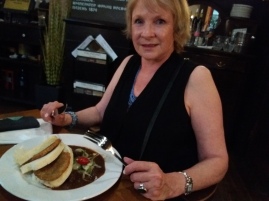 Not sure about the dumplings!

The next morning we meet my new friend, genealogist Julius Muller, who put together a Hermann Ungar literary tour for me in October, which I described in my previous blog,  and which also gives the background to our grandfather Hermann Ungar and has photographs many of the places I mention here 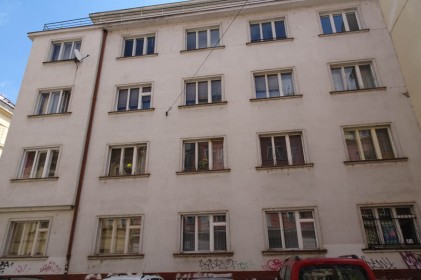 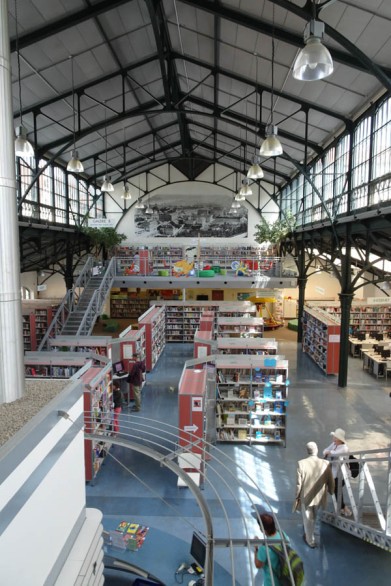 The old market opposite teh family home, now a library

Julius has been bitten by the Ungar bug and has done some more research. At the first stop, the family home  from where Ungar died and where our father spent his early years, we are photographed by one of the tenants ‘in case we are burglars’. After that we delight in playing at being a dangerous trio of criminals as we attempt to break and enter our way round Prague trying to get inside Ungar’s old haunts. 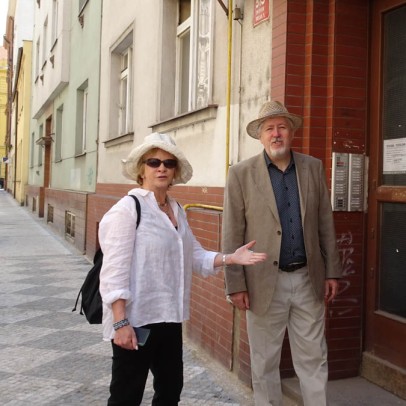 Outside the building that replaced the grandparents house in Smichov 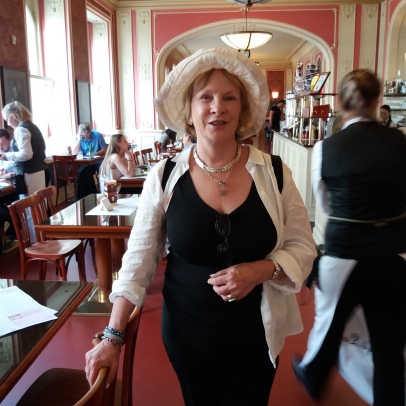 In The Louvre Cafe

The art deco apartment at Masaryk Quay has undergone extensive renovation during the past few months, and now looks very smart indeed – I am glad to see they have left the small-boy-bannister-sliding-prevention studs on the lovely staircase, which now has delicate pastel-hued art deco glass panels. Even the old House of the Camel at Navratilova, where Ungar was a student, is being renovated. Prague seems to be coming up in the world. 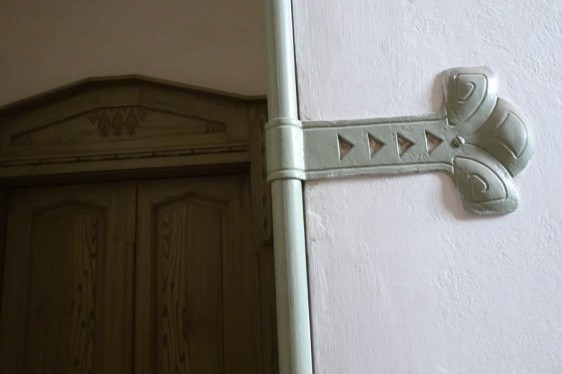 Outside House of the Camels in Navratilova

Julius is good company as ever, telling us Jewish jokes and stories as we wander round. I particularly like the one about the naughty boy who is slung our of all his schools for misbehaviour. HIs distraught parents eventually resort to sending him to the Catholic school, to be supervised by monks. Amazed at his good reports and exemplary behaviour, they ask why he has turned over  a new leaf. ‘Well’, says the boy, ‘there’s a statue of a crucified Jew in every room …’. 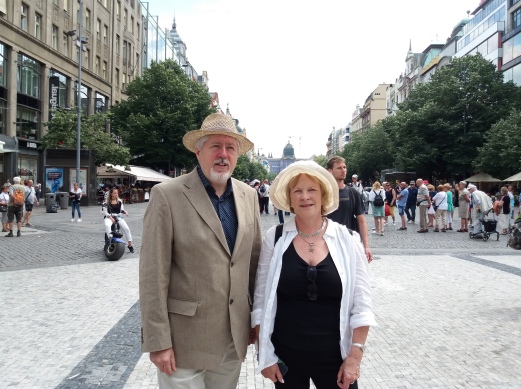 Julius and Bonnie on tour

In what was the courtyard of our great grandfather’s factory

I have resorted to a stick which comes in handy for jumping queues and getting preferential treatment (very good on airplanes, and now on London tube in this hot weather…everyone gives way to the pink-sticked dragon). We also visit the spot where Hana, Ross, Tommy and I scattered Dad’s ashes in the Vltava, opposite the handsome art deco house on the Reiger Quay, as it was then known.

The Vltava river where we scattered the ashes

Julius is to drive us to Boskovice the next day – subject of the next blog – and on our return we just have time to visit the Baby Jesus shrine in Church of Our Lady Victorious, where the Statue has over 300 changes of clothes for every religious occasion. Quite something!

The shine with the baby Jesus centre 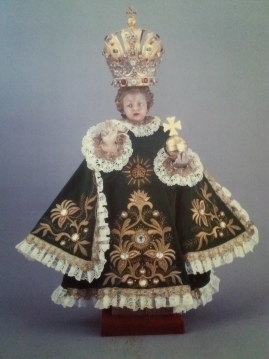 some of his outfits 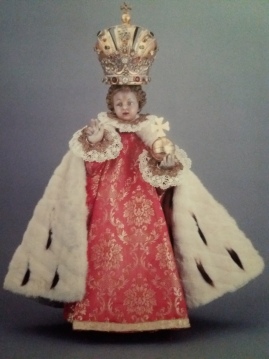 some of his outfits

On our last day I have booked the Jewish synagogue tour as Bonnie’s husband was Jewish and she is fascinated by this part of her heritage, which she was unaware of until we met.

Glorious interior of the Spanish synagogue 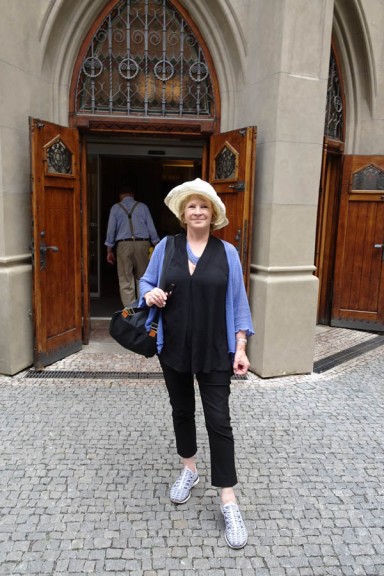 I was not able to find the Ungar and Kohn names in the Pinkas synagogue in October so I ask Marketa, our guide, if she will be able to help us.  ‘Ungar! But Tomas Ungar was my father’s best friend!’ she exclaims. But that’s impossible I say – and as we chat  I realise  she has led us to the Prague Ungars, whom Julius was so determined to try and find. My great-grandfather Emil’s brother Max’s descendants went to Prague, and his grandson Herbert settled there; Tomas was his son, a writer and photographer! The genes are strong in our family. Marketa’s best friend is Amos, son of THAT Tomas. What a coincidence. She is very excited by this, as are we, and she tells me how to contact Amos (which I do later and he is as thrilled as I am). 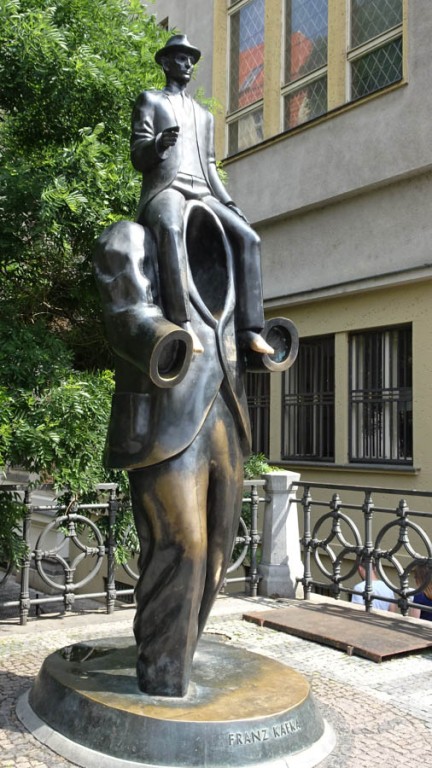 The Jewish graveyard in the Pinkas Synagogue

The Jewish graveyard in the Pinkas Synagogue

Of course she manages to find our relatives on the wall of remembrance – the Kohn family: Richard  Kohn was our grandmother’s third husband although they never met after their marriage; Ludwig, his father, was a most beloved Uncle whose end was documented in a letter I discovered in Israel. Of 118,000 Jews in Czechoslovakia, 26,000 managed to emigrate but 80,000 died and these names are all recorded in the synagogue. It is a most moving testament.

With Marketa, our guide, the bridge to long-lost Ungars

Marketa told us many interesting things, especially about Terezin, which I shall visit next time but, in particular, that it is thought that the Star of David was used in Prague for the first time.

Look for Ludwig and Richard Kohn, hard to see..

Look for Ludwig and Richard Kohn, hard to see… 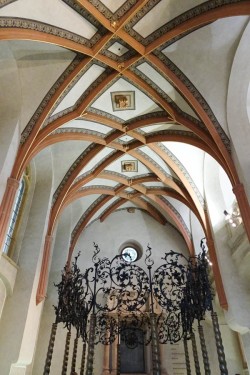 We have our photos taken beside the glass case containing pictures of our forebears, the two great high rabbis of Prague, R Shmuel ABD Prague Halevi Landau  1756-1834, and his father Yekhezkel ba Hoda Bi Yhuda Landau 1713-1793. We feel cheated that Ungar’s books are not in the showcase of Prague Jewish writers. We are sworn to put this right and Julius will help!

In front of Ezekiel and Shmuel Landau…how cool is that???

A trip to Prague is always a shot in the arm when I feel cast down by the difficulties of finding an agent and publishing my book on my family. And to be able to share it with someone else who is as passionate as I am about our shared past is an added bonus.

3 thoughts on “Prague: travels with my long-lost sister”